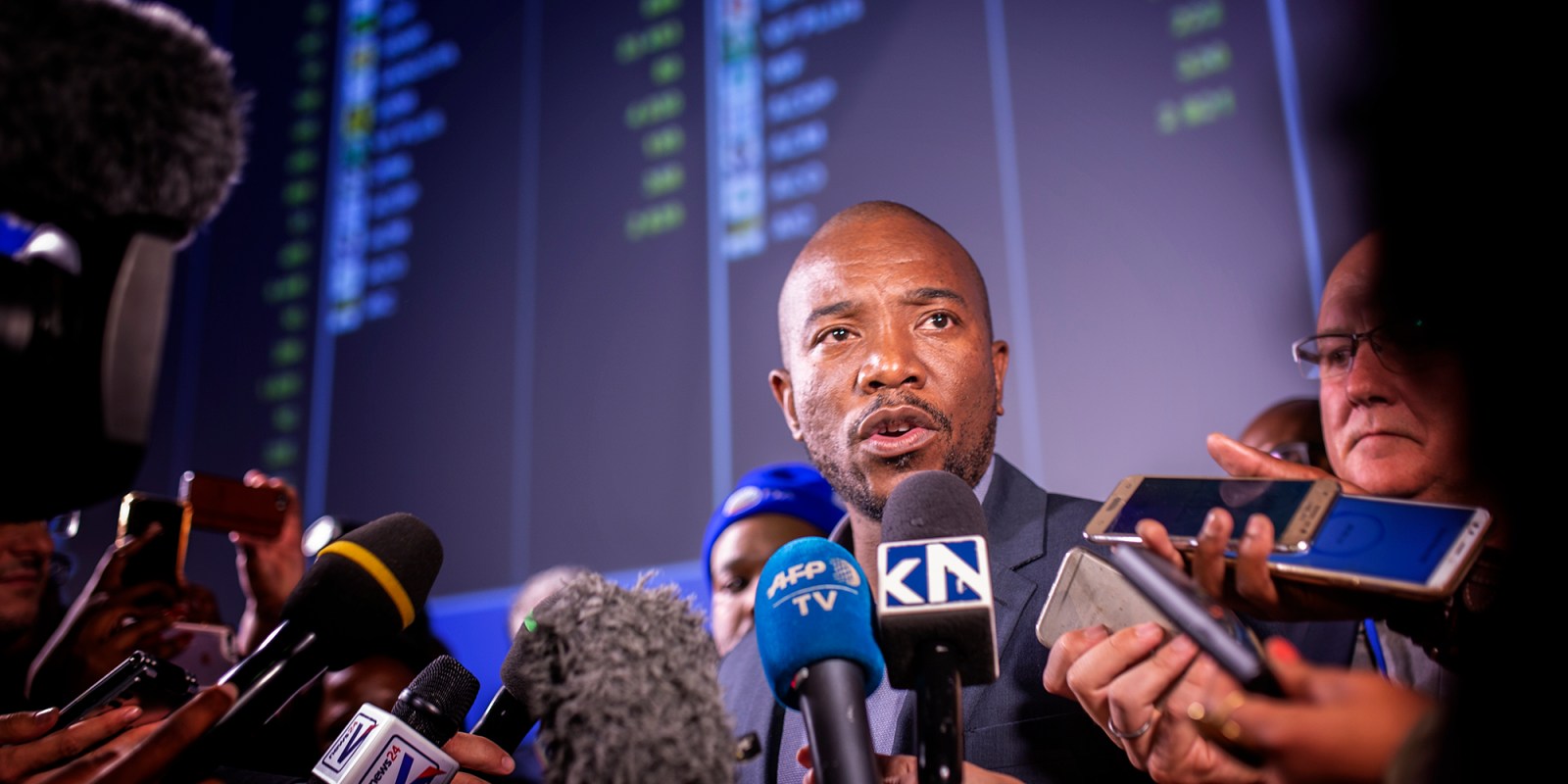 DA leader Mmusi Maimane speaks to journalists at the National Results Operation Centre in Pretoria on 9 May as voting results continue to come in from the 2019 elections. (Photo: Leila Dougan)

Despite talk of the DA losing its hold on the Western Cape, the party looks as if it will follow through and ‘Hou die Wes-Kaap blou.’ As of Thursday night, the DA was at a comfortable 55% while the ANC was far behind at 28%. The EFF was fourth at 3.8% with newcomers GOOD in fourth place at 3.1%.

Barring a major collapse, the DA will keep control of the Western Cape.

With more than 90% of votes counted, the party can finally breathe a sigh of relief after a tumultuous two-year period in the province. The DA faced criticism for its handling of the Cape Town water crisis and then had to endure an ugly breakup with former Cape Town Mayor Patricia de Lille.

“I feel great,” DA Western Cape leader Bonginkosi Madikizela said. “Look, given some of the challenges we had in the province and the fact that many people had written us off and even predicting that we might be below 50%, to be at 55% with more than 80% of the vote counted, it feels quite good.”

The ANC had internal polling showing it at 38% support, but ANC provincial secretary Faiez Jacobs said the weather in the province — rain in the morning, and cold weather throughout the day — hurt the party and helped the DA. Still, the national ruling party appeared to lose support in the one province it doesn’t control after earning 32% of the vote in 2014.

While Jacobs blamed negative campaigning from the DA and a lack of voter turnout, he said the ANC will need to do some “self-reflection” in the Western Cape.

“I think the inclement weather was a big factor,” he said. “Because our polls were giving us about 38%. If it was sunny on Wednesday and there was adequate provisioning, your traditional African township vote would’ve been much bigger.”

No other party was close to double digits. The EFF trailed far behind with 3.8%, but made huge gains nationally and in other provinces. It was still an improvement on 2014, when the party earned 2.11% of the vote in the Western Cape.

“We are growing,” EFF provincial secretary Melikhaya Xego said. “Slowly but surely, but we are getting there. So we must be very happy for what happened. How our people still have got confidence in the EFF, which means there is something right that we are doing and we just need to do more.”

GOOD, founded by De Lille after her messy split from the DA, had success on both a provincial and national level. The party will likely gain representation in the National Assembly and was poised to win at least one provincial seat with about 3.1% of the vote.

GOOD secretary-general Brett Herron said the main goal was to build the party before the 2021 and 2024 elections, but was happy with its performance.

“It looks like the elections haven’t been very kind to new parties,” he said. “Except for us. We seem to be the only new party that’s managed to break through that barrier and secure enough votes to get some public reps elected.”

Madikizela had a different take on GOOD’s success.

“In any divorce settlement, you don’t keep all your assets,” he said.

The DA was weakened from the 59% it garnered in 2014, but still held the province and will not have to form a coalition to keep control of the Western Cape. Meanwhile, the ACDP received just 2.58% of the vote, despite late polls that showed its support at 7%. The FF Plus — which appeared to drastically improve nationally — earned 1.68% of the vote, also an improvement from its support in 2014.

The Western Cape will likely continue to be the only province not governed by the ANC as the national ruling party appears to have control of Gauteng and the other seven provinces, with results still expected to come in throughout Friday. DM