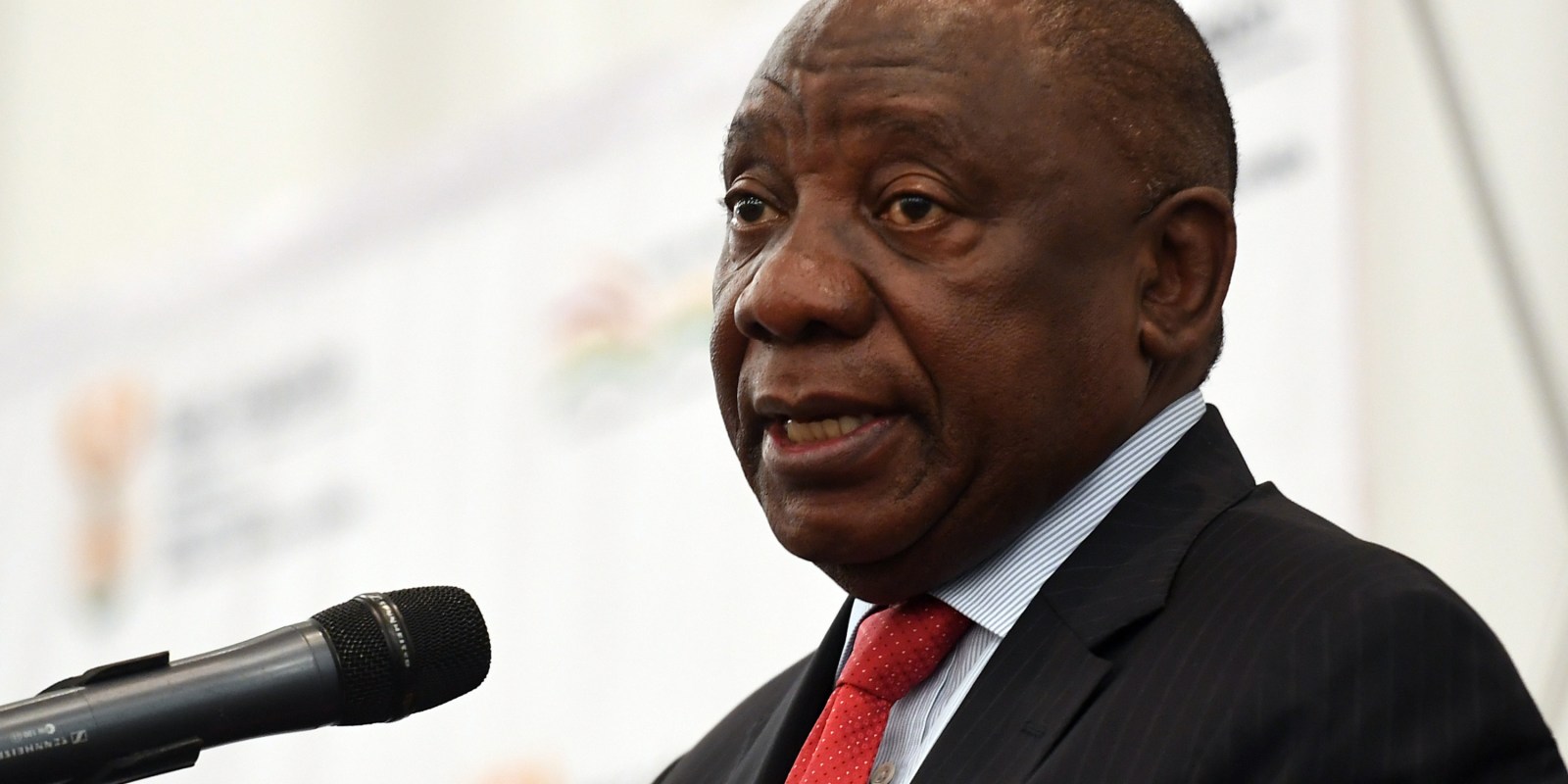 South African President Cyril Ramaphosa (L) and Indian Prime Minster Narendra Modi (R) shake hands prior to their meeting in New Delhi, India, 25 January 2019. Ramaphosa is on a two-day state visit to India where he will also attend, among other official meetings, the Republic Day celebrations on 26 January. EPA-EFE/STRINGER

Both candidates and parties have given short shrift to explaining their positions on South Africa’s crucial foreign and international economic policies, in the about-to-wrap-up national election. But these issues are too important to be left to a couple of lines in the parties’ respective manifestos. At the same time, however, the media may have let them all off far too lightly to address the needs of voters. There is a better way.

During much of this current election campaign in South Africa for the national and provincial legislatures — and, therefore, for the presidency — it almost seems as if this campaign had been fought in Samuel Butler’s mythic Erewhon, Jonathan Swift’s cloud land of Laputa of Gulliver’s Travels, or in the land portrayed in those ancient Arab/Persian tales about the mysterious, distant island of Serendip.

This has been instead of the basic truth that South Africa is inextricably tied to the world’s economic, financial and political networks. A stable, growing global economy benefits South Africa, even as political and security instability, economic upheavals and a troubled global financial system can put paid to gaining much — or any — progress in meeting South Africa’s pressing national needs.

And yet to watch or listen to what has passed for one-on-one, in-depth interrogations of party leaders on air, or in the various broadcast group discussions leading up to 8 May, the rest of the globe has barely figured in these conversations or town hall gatherings. (I confess I didn’t catch every one of them, although my sustained random sample of them would have been more than enough to make most adults weep, and probably to make listeners and viewers shudder for the future of the republic.)

Of course virtually every national election, anywhere, will naturally focus largely on important, pressing domestic issues — and the divisions between the parties and candidates over these domestic issues. Pretty much everywhere, the foreign policy usually weighs in at a distant second place, except in times of acute national security threats.

But South Africa is utterly dependent on its ability to sell its exports of primary materials; it is deeply dependent on capital inflows from putative investors; and its entire economy hangs on its ability to support a relatively stable exchange rate and an open international economic network, as part of a peaceful international system. As a result, even debates ostensibly about domestic issues should become grounded on or connected to an appreciation of those large-scale international issues — and they should have been a significant part of this present campaign. But they were not.

As Open South Africa Democracy Fellow Lukhona Mnguni, in a report he wrote recently for a German foundation, evaluating the campaign’s debates, explained:

“There appears to be some disjuncture between what political parties say in their public performance and rhetoric compared to the inconsistent effort they put in their manifestos when articulating foreign policy. This makes it difficult for voters to trust whether the performed political speech indicates a party’s priorities when said speech is not part of the policy promises published for voters to interact with.

“This might also be indicative of some political parties not taking the manifestos as seriously as they should in their electioneering process. It is quite glaring that the IFP has not stated its foreign policy positions in the last two elections. Those who imagine themselves in government should be aware that South Africa continues to exist with a responsibility to champion the interests of the African continent and the global south generally.

“The country’s foreign policy lustre was dimmed by what emerged to be a transactional foreign policy under the leadership of former president Jacob Zuma. The country developed friends in places where little concurrence exists between those places and our country’s rights-based agenda. This was possible because, at home, the rights agenda was also being undermined and debased by rampant corruption that focused on the narrow interests of a patronage network surrounding the then president.

But mostly, when they bothered to speak about the country’s international circumstances at all, candidates and parties have only sporadically commented on a couple of foreign policy issues such as the Israel/Palestine conflicts, that hardy perennial of reform of international institutions (whatever that might mean), and, in the case of the Economic Freedom Fighters, the mandatory denunciations of Western imperialist designs.

While the parties and candidates certainly can be faulted for generally not bothering to bring forward the key points of their respective manifestos, for avoiding any substantive efforts to explain how domestic and international issues are significantly intertwined, and for describing how their respective positions will advance the national interest, the media, especially the broadcast media, should also be called to account here as well for a share of the blame. As far as I could tell, there were no real efforts to question the various presidential candidates or their surrogates on foreign policy and foreign economic policy issues — and to insist on specifics.

But there could have been tough questions asked successively of the major parties and their candidates, forcing those politicians to get beyond generalities and platitudes. For example, if a question concerned the restructuring of the UN Security Council, candidates should have to explain why it mattered to the nation and why South Africa should be promoted ahead of the rest of the queue to gain a permanent seat, ahead of Nigeria or Egypt from Africa, or before global economic powerhouses such as Germany, Japan and South Korea, or even Italy, Spain, Brazil or Mexico.

If the question concerned BRICA, the candidates should be forced to explain how South Africa can work effectively for the nation’s benefit in conjunction with substantially authoritarian leaders like Xi Jinping, Vladimir Putin or Narendra Modi and Jair Bolsanaro and their own special brands of authoritarian tendencies. And the follow-up question should address what real, tangible benefits derive from all the efforts South Africa invests in this BRICS relationship, in contrast to the challenges and possibilities of some seriously effective commercial and economic diplomacy with the rest of Africa, with the EU, and with the US.

And speaking of the US, questions, here, should focus on what the parties and candidates are going to do, should they gain or hold power, to find a way forward for a solid economic relationship the US, once AGOA expires in 2025.

Or candidates could be asked to reply to a view such as the one historian RW Johnson has advanced in his newest book, Fighting for the Dream, where he wrote:

“President Donald Trump could renounce AGOA at any time, he has scant regard for Africa anyway, and will take particular umbrage at Pretoria’s outspoken hostility to Israel. Policy-makers need to remember that if AGOA is scrapped, so too is the South African motor industry, with a lot of collateral damage to other industries. Already Trump’s tariffs on steel imports have hit the South African steel industry hard…”

Moreover, how will South Africa be prepared to negotiate with the IMF if it turns out an IMF loan becomes necessary to save the government budget from an implosion under all those troubled SOEs?

There are many other issues, such as continued participation in the International Criminal Court, joining and reinforcing global co-operation in combating terrorist activities, confronting homegrown authoritarians in other African nations, addressing global environmental concerns, and the protection of maritime resources from foreign predation, that all could have formed the basis for some real, engaged discussion for the benefit of the voting public — but it hasn’t happened.

But if there is some self-reflection on the part of the media as well, perhaps next time, instead of an obsessive focus on what American critics derisively call their own horse-race coverage, that kind of coverage here should at least be supplemented by efforts to inform voters about what their would-be leaders actually know about the world and its complexities. DM