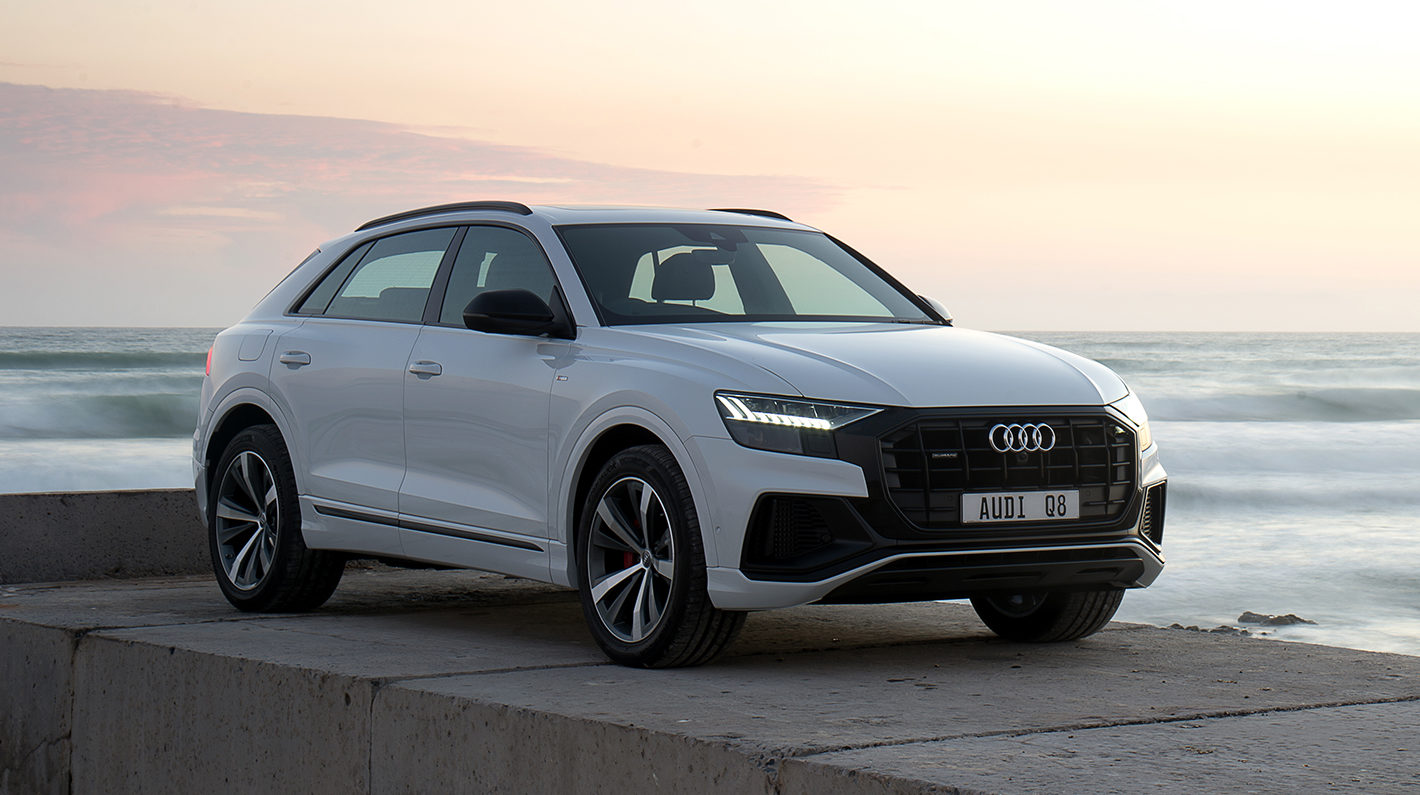 The new Q8 is being billed as the harbinger of new and great things at Audi. It’s meant to place a greater emphasis on sporty, aspirational motoring, while introducing a new design language and a slicker user interface. Can it live up to those lofty ambitions?

The past 18 months or so have been disconcertingly quiet on the Audi South Africa front.

While the brand has introduced a flurry of new models abroad, those have yet to reach our shores. Meanwhile, arch-rivals Mercedes-Benz and BMW have had no shortage of new products to make a noise about. 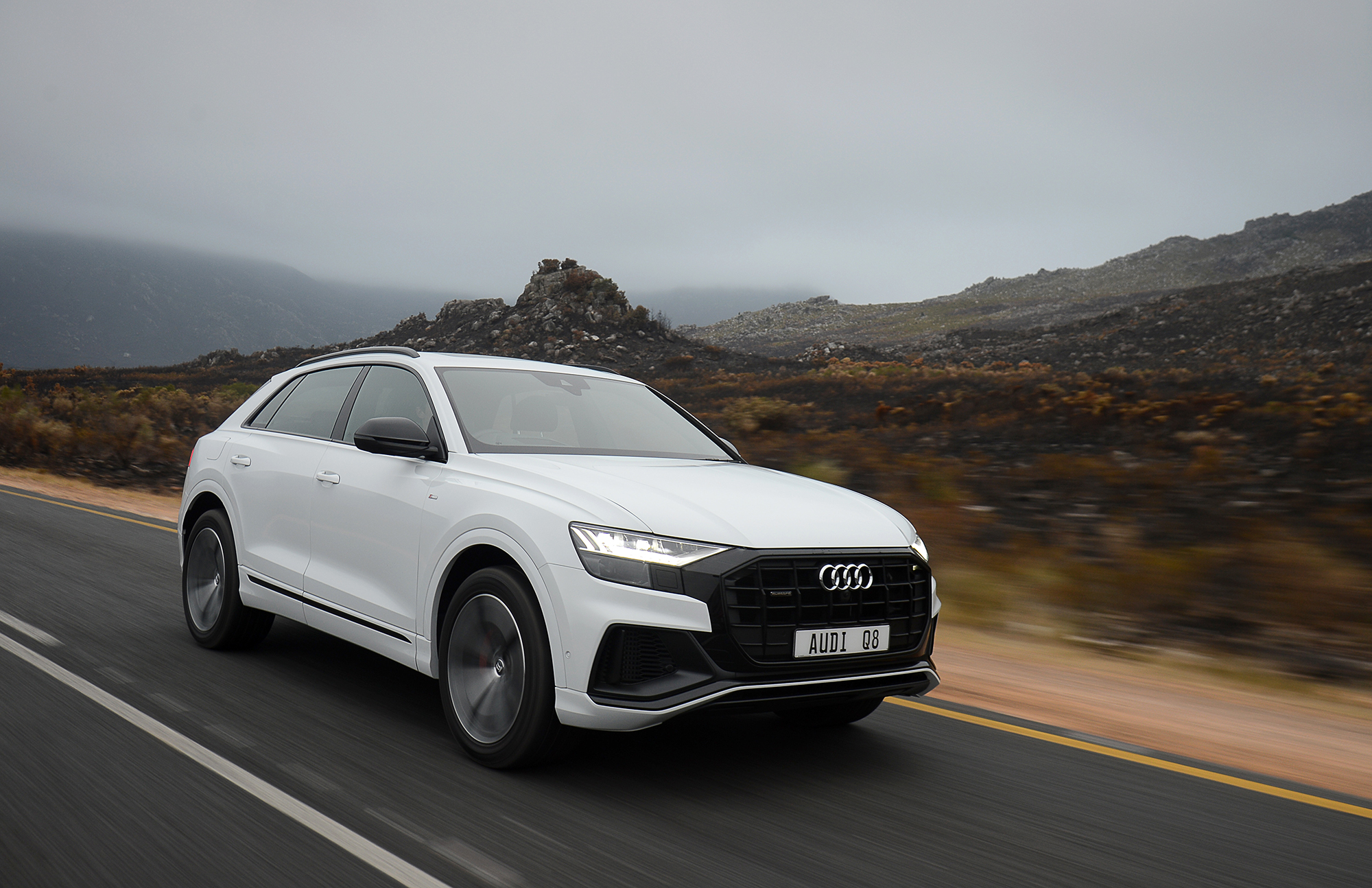 Not that it’s been a rosy time for the premium segment. A weak and volatile currency has made pricing tricky, while the gloomy economy, poor business confidence and political uncertainty have all contributed to a softening in demand for premium cars.

Audi’s local product planning has also been hampered by the new WLPT fuel economy and CO2 emissions procedure introduced in Europe in the wake of the so-called Dieselgate scandal. It’s meant the re-homologation of all engine/gearbox combinations, significantly delaying the availability of new models locally. 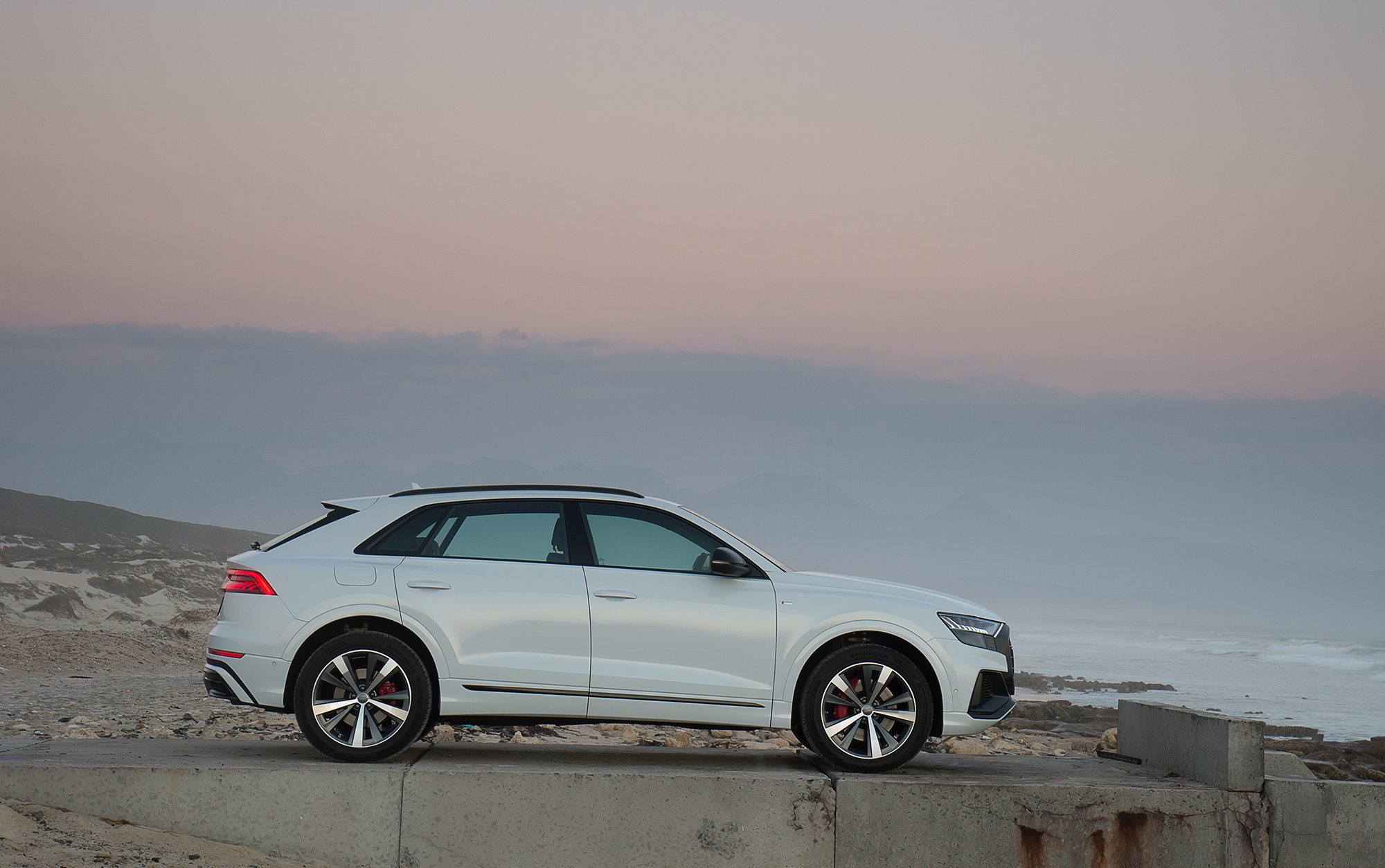 “That said, we’re pleased to have maintained and even increased our market share,” Hill says.

“We’re number one in consumer satisfaction and brand equity terms. We’d like to think we’ve weathered the storm, and are now in a better shape than ever to meet the challenging market conditions.”

The Q8 is the first salvo of an aggressive product plan that will see at least four new models introduced this year, with more to follow in 2020. The highly anticipated, all-electric e-tron SUV will make its debut late in 2020, once the infrastructure is in place to fully support it. 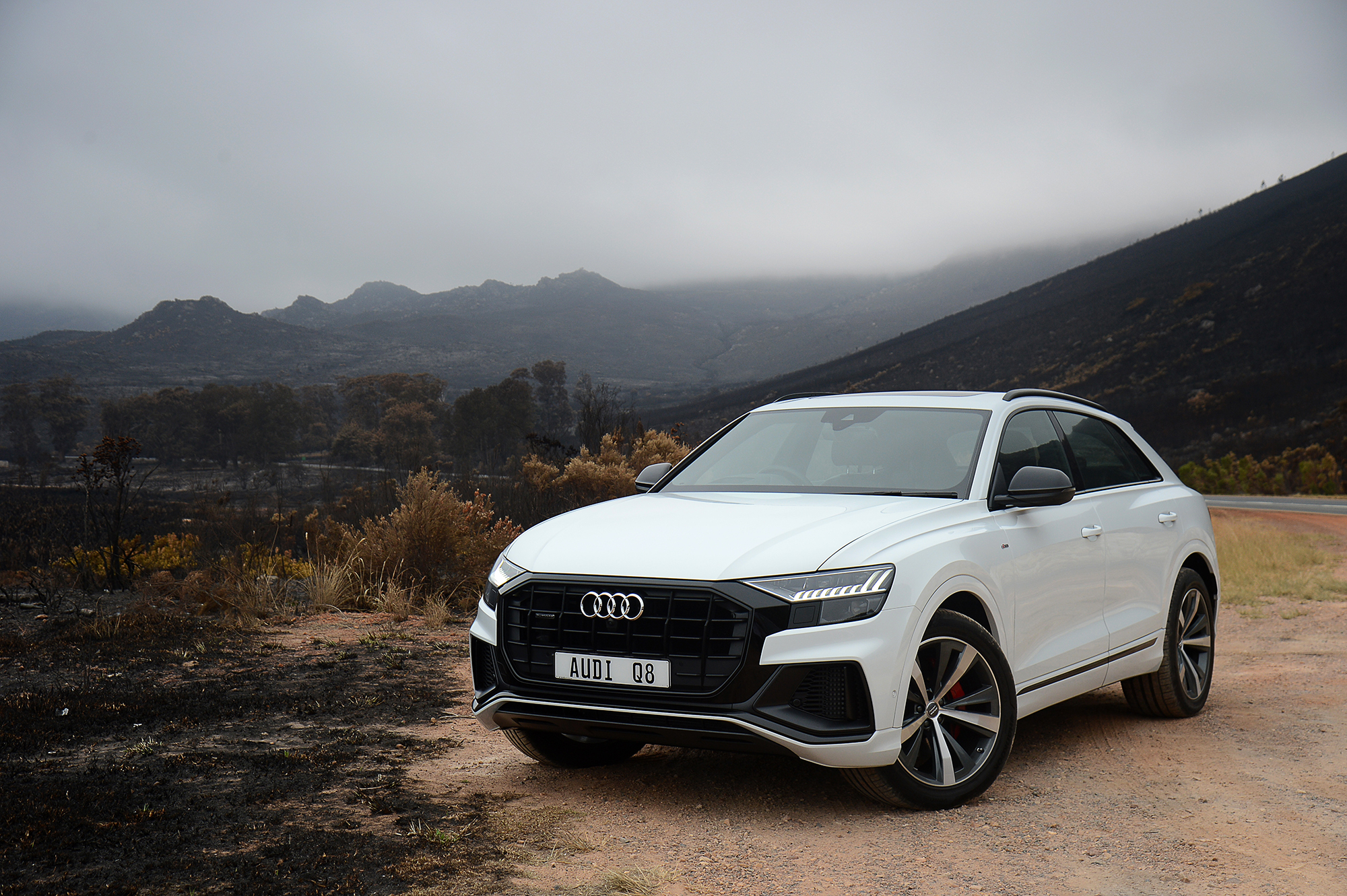 But back to the Q8 – a vehicle that really needs to be seen in the metal, and experienced from behind the wheel, to be fully appreciated. While it’s based on the full-sized Q7 SUV, the two have little in common as far as design and interior execution are concerned.

Yes, it shares the Q7’s latest-generation MLB platform and wheelbase, but the Q8 is lower, wider and shorter, creating an unmistakably athletic impression that places the emphasis firmly on sport rather than utility in the SUV context.

It also heralds a fresh and powerful design language that draws some of its inspiration from the original Audi quattro’s blistered wheel arches and muscular haunches, while introducing a stronger, more resolute Audi ‘face’. 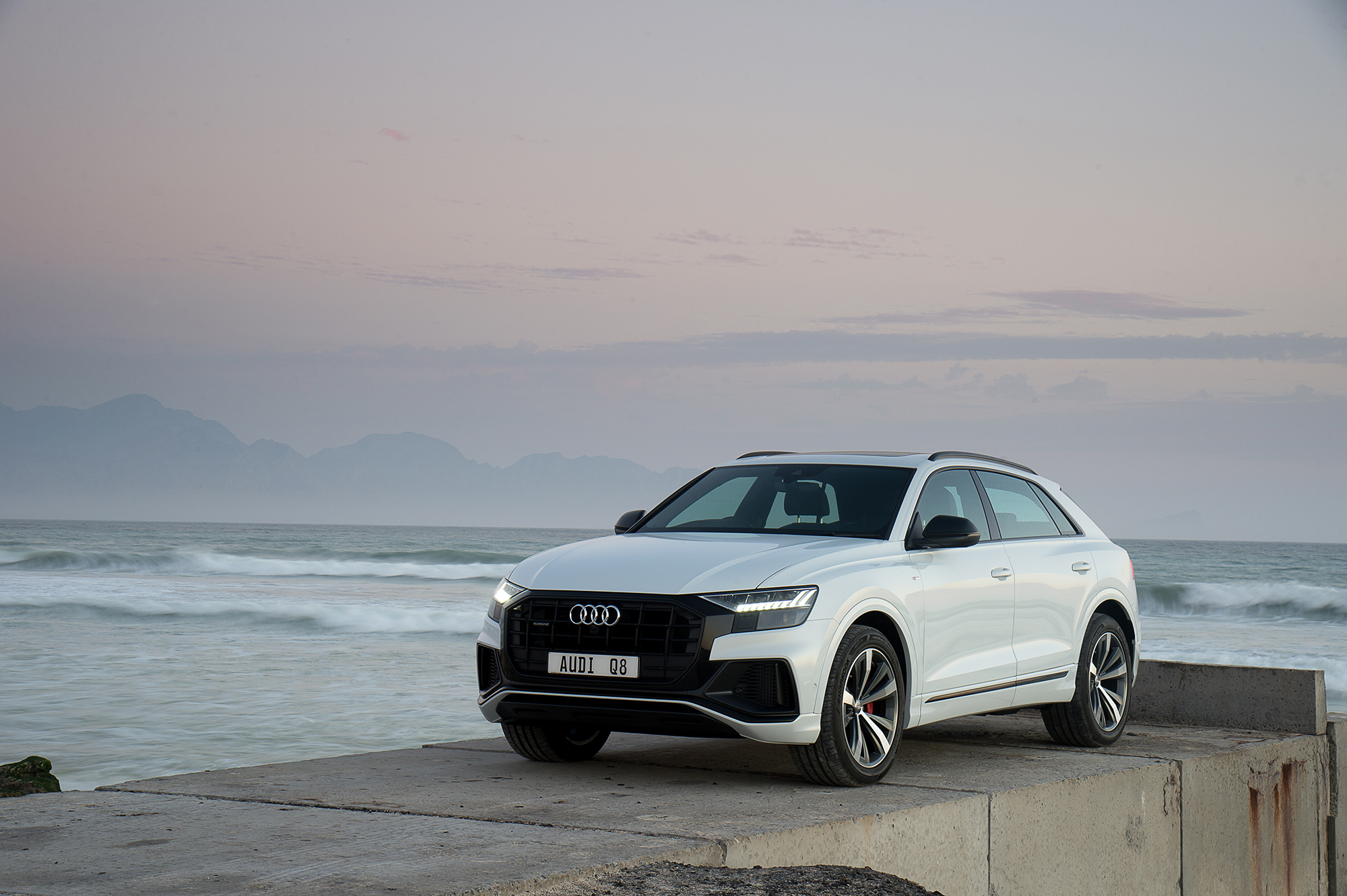 The grille is now octagonal and even larger, the advanced LED Matrix HD headlights even slimmer and more aggressively slashed into the edgy metalwork. The rear reflects an equally individual character, with LED taillights linked by a light strip that deliver an eye-catching lighting sequence on start-up, and an animated indicator action.

Add a smoothly tapered roofline culminating in a tidy spoiler, frameless doors, blacked-out B-pillars and seamless glasswork, and the Q8 exudes a mix of dynamic aggression and poised sophistication.

If the Q8’s styling is promising, then the cabin delivers on that promised with an execution that combines Audi’s elegant minimalism with an all-digital, high-tech interface. 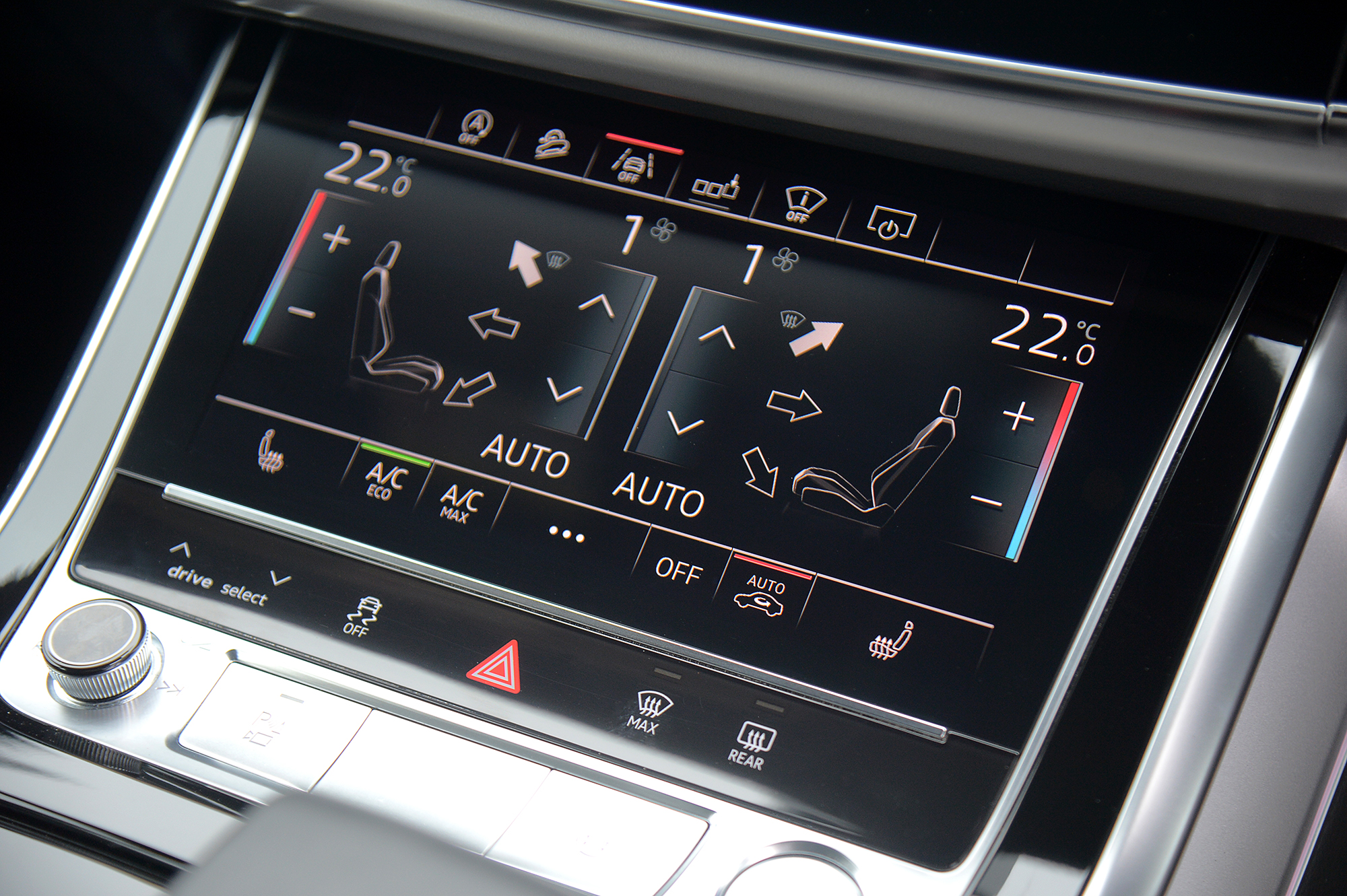 Drawing on the swipe/sweep/pinch principles familiar from the smartphone universe, it attempts to make a complex and comprehensive feature set as intuitive and accessible as possible.

The all-digital virtual instruments ahead of the driver are joined by upper and lower touchscreens in the centre screen that combine to offer a configurable and user-friendly interface.

Uniquely, use of the touchscreen’s virtual button and controls is confirmed by haptic feedback, providing positive, touch-based confirmation of the action selected. It makes a huge difference to using the system while on the move. 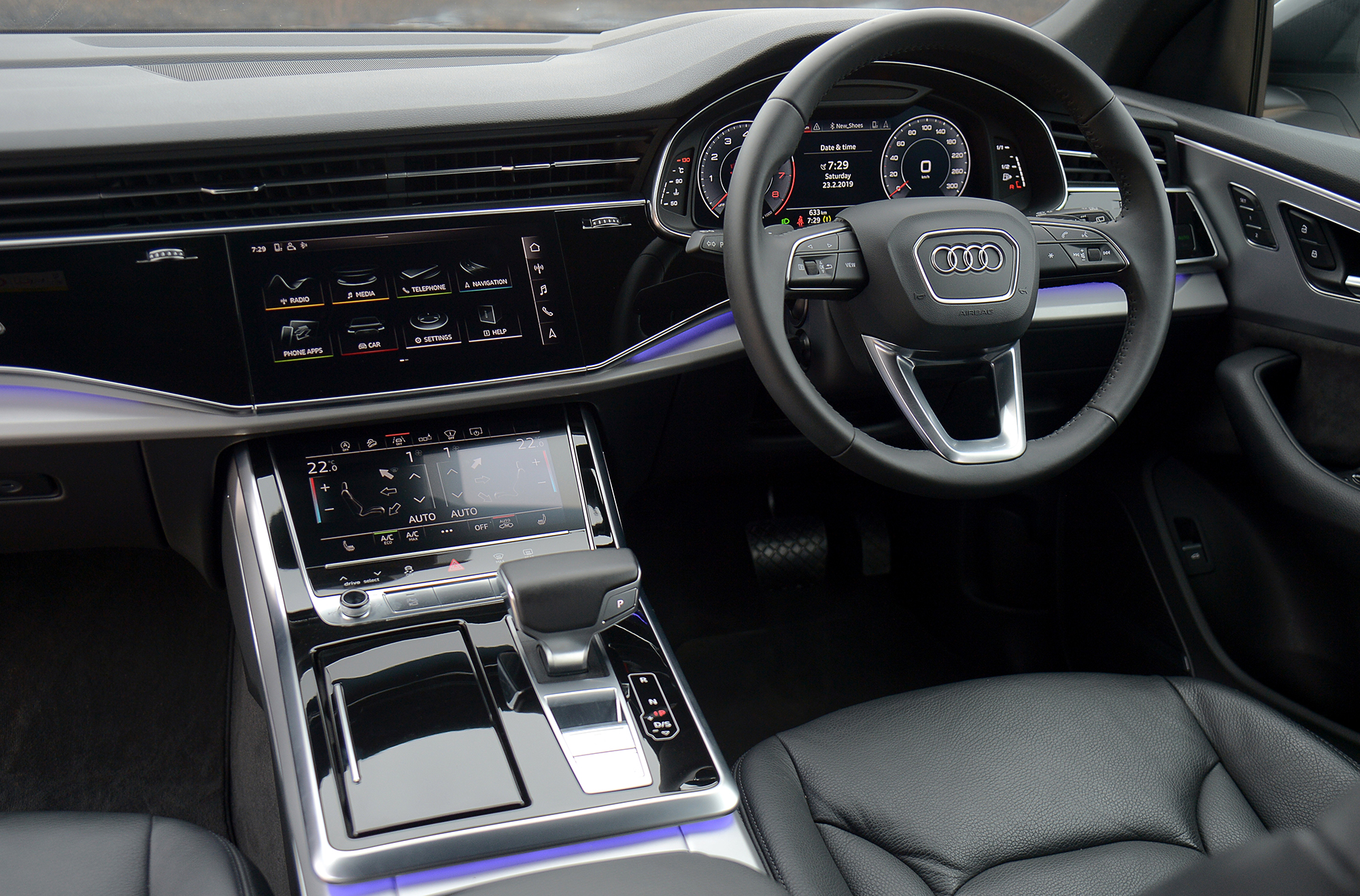 Those of us older folk used to at least the option of analogue controls and buttons may find the all-digital Audi system a little disconcerting at first. And those sleek screens are soon smudged by ugly fingerprints.

But almost against my expectations, the interface works exceedingly well in practice. Within an hour or so of driving the Q8, I had already become too accustomed to its benefits. It also made getting into an older-generation cockpit feel decidedly old-school.

Its all-digital approach aside, the Q8’s cabin is also spacious and luxurious in that understated, stylish kind of way so typical of Audi’s cockpits, while visible and tactile quality is top-notch. 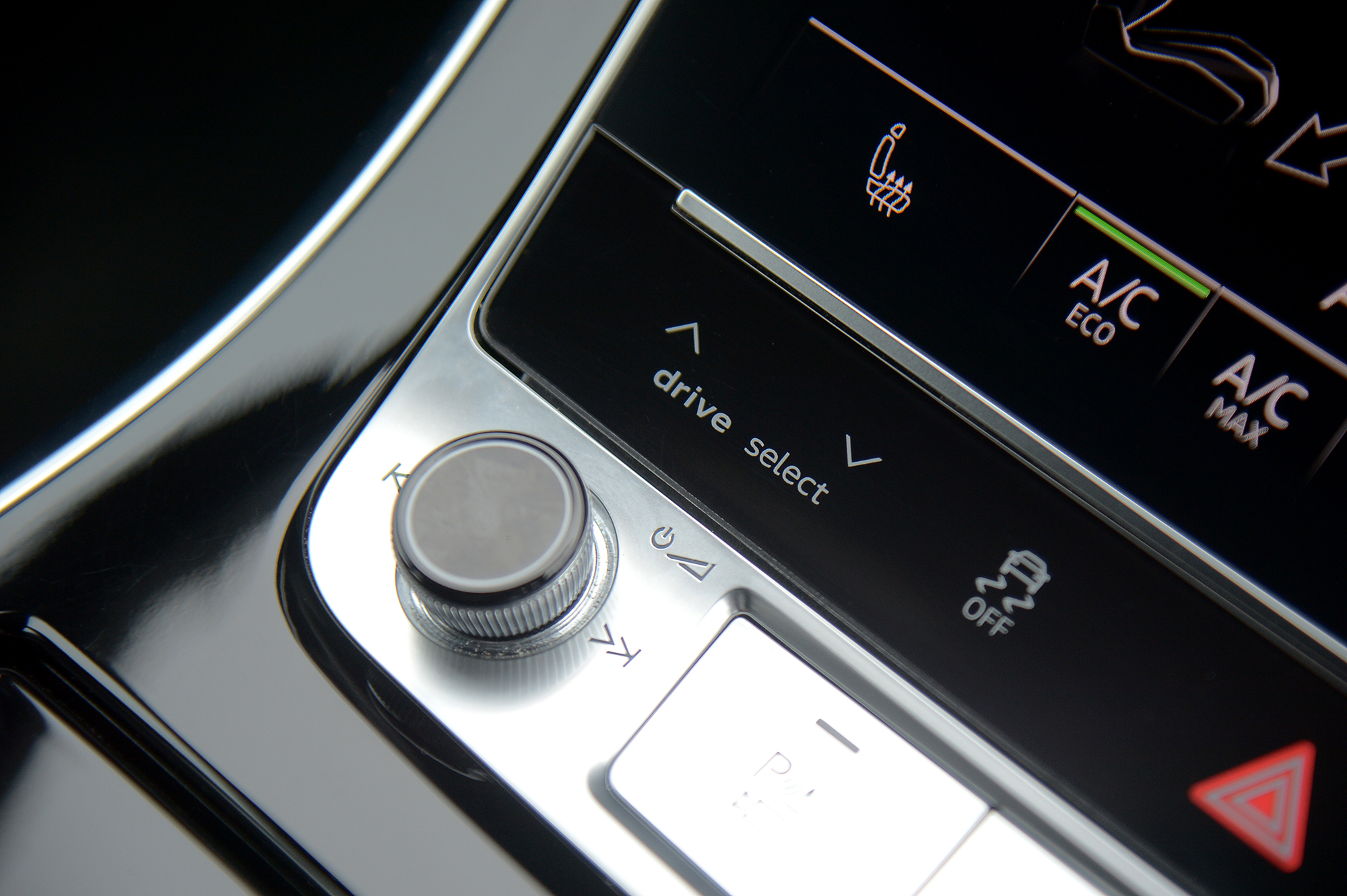 It’s comprehensively equipped, too – as it should be at this seven-digit price point. Audi has pledged to build in more of the nice stuff as standard than before, and to simplify the options by bundling them together in packages that offer better volume (and are easier to understand).

The exterior may understate the size of the vehicle, but the interior is surprisingly spacious, with stretch-out space for up to three rear occupants. That’s mainly thanks to the Q8’s generous wheelbase. The boot is capacious at 605 litres.

For now, the Q8 comes in 55 TFSI form only. In practice, that translates into a 3.0-litre V6 turbo petrol engine, producing a useful 250kW, coupled to the ample of shove provided by a 500Nm torque peak. A 183kW/600Nm 3.0-litre TDI will join its petrol sibling by mid-year. 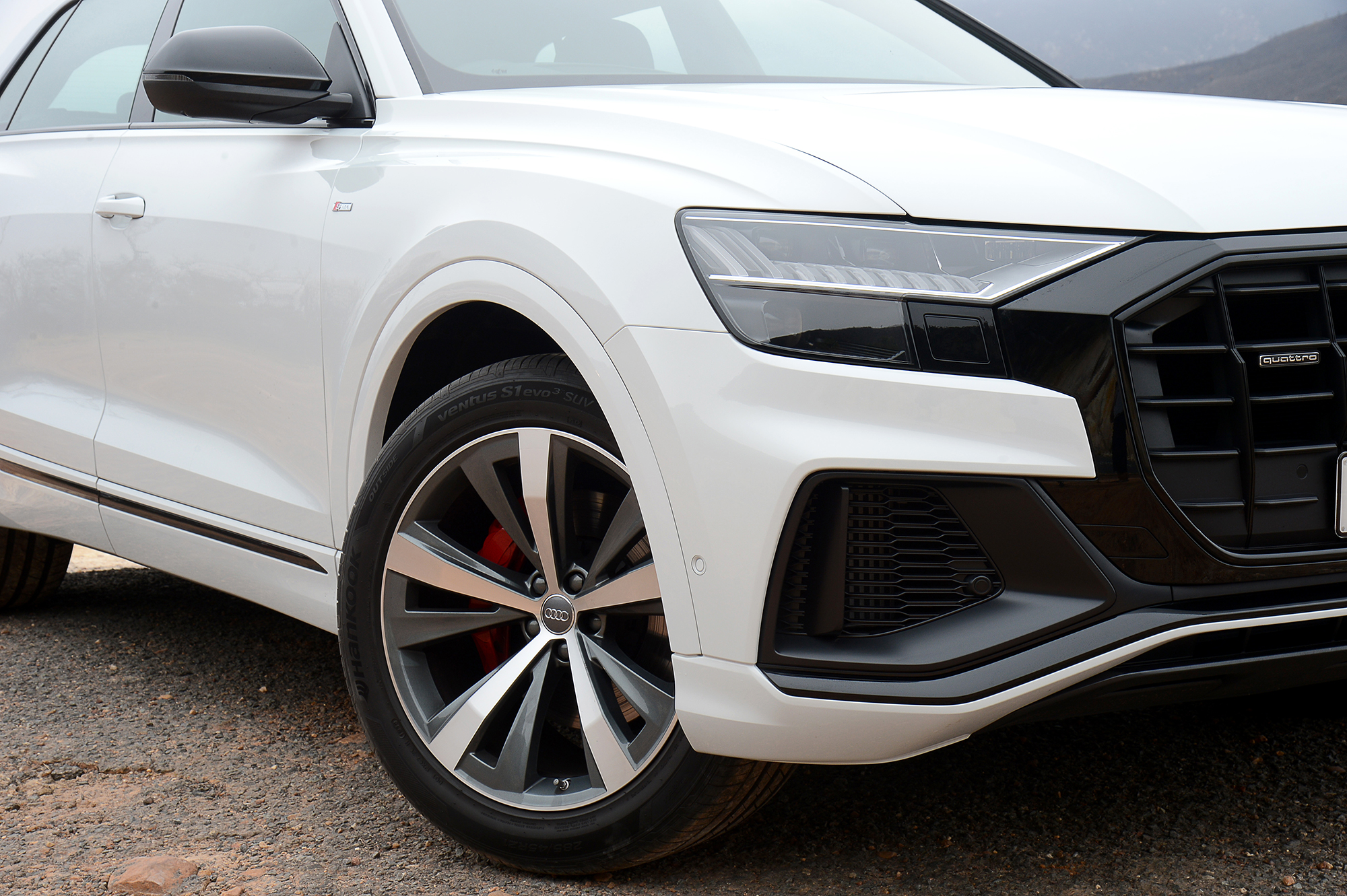 Quattro intelligent all-wheel drive is standard, as is Audi’s established and well-sorted Tiptronic eight-speed auto gearbox. A selection of seven driving modes caters for all needs, from the sporty Dynamic to Off-Road.

Not that I would consider the Q8 an off-roader in the go-anywhere sense of the word. Quattro and the ability to raise the air suspension for increased ride height does allow a measure of off-the-beaten-track capability.

However, those 21-inch wheels (22-inchers are also on offer) and racy low-profile rubber mitigate against anything more serious than smooth gravel or, at a push, a well-tended jeep track. 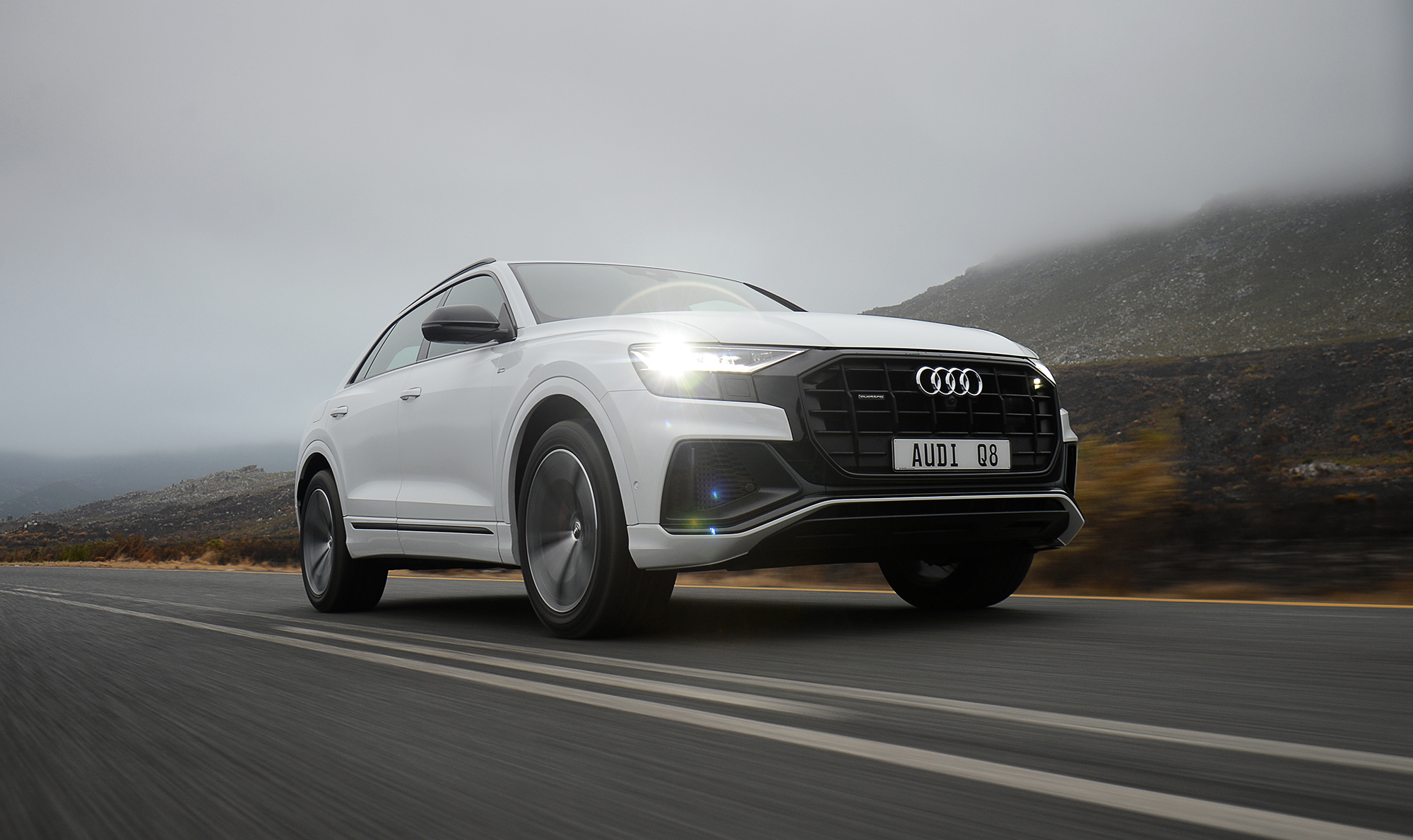 Does the Q8 live up to the athletic promise of its styling? Yes, and no. At 5.9sec for the 0-100km/h dash, the big Audi is certainly rapid, especially considering its 2,095kg kerb mass.

However, performance is better described as effortless: this is no S or RS Audi (those will come later).

There’s plenty of urge on offer, and midrange punch is admirable, especially when the throttle response is sharpened in Dynamic drive mode. Swap to manual shift mode, and use the standard gear shift paddles, and the Q8 delivers an engaging driving experience.

There’s good heft and feedback from the steering, and while the turning circle could be tighter, manoeuvrability on the move is more agile than the Audi’s bulk suggests. 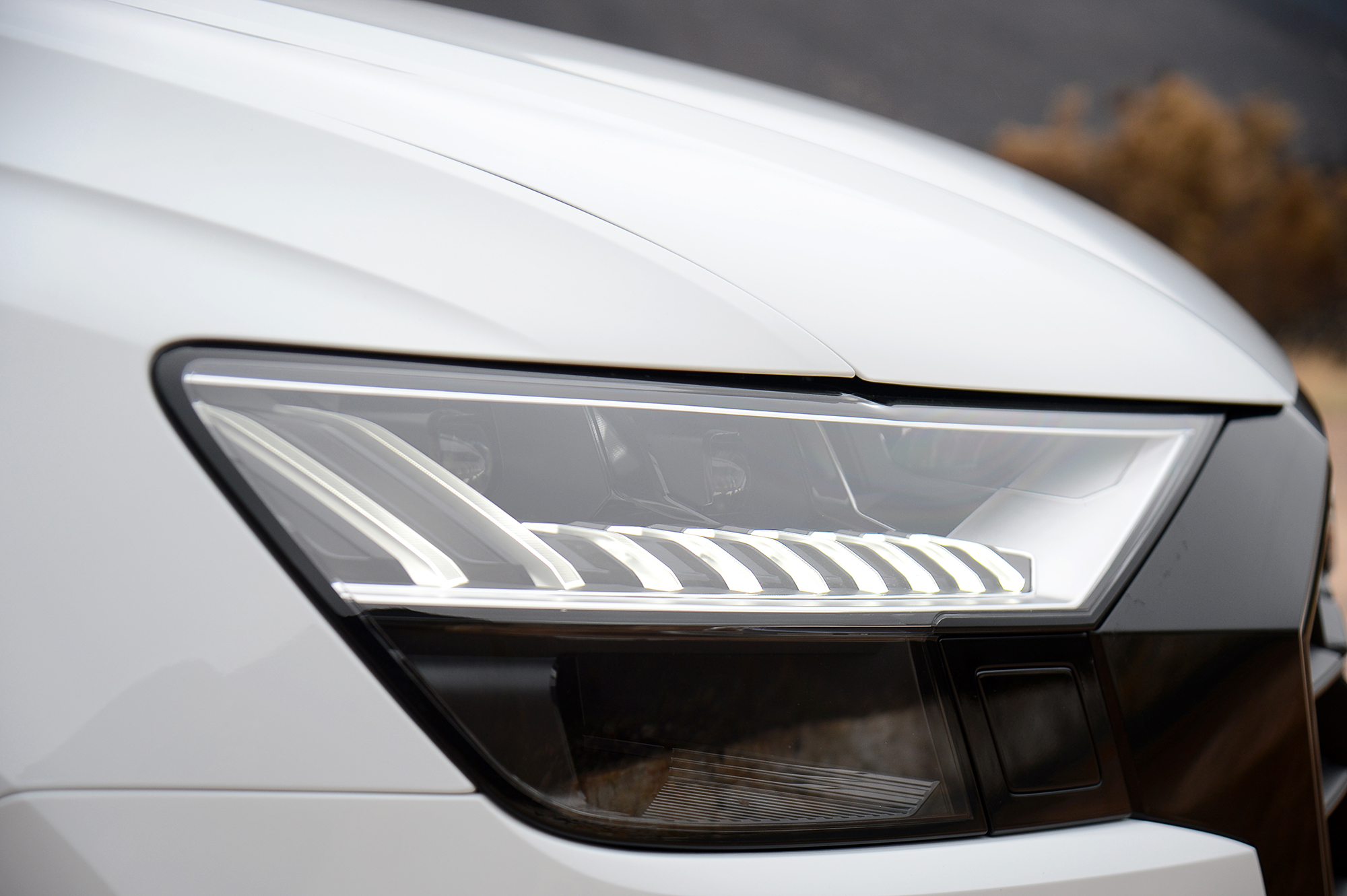 Even on 22-inch wheels, and with the suspension at its lowest and hardest, ride quality was admirable on a 280km test route offering a broad mix of surfaces and conditions, displaying a good balance between bump-soaking compliance and confidence-inspiring tautness.

It’s arguably even better in Comfort mode, which allows smoother progress, but not at the expense of composure – unless you’re really pushing hard in the tight stuff on smooth tar.

Driven with gusto, the new Audi seems to shrink around you, delivering a driving experience that is engaging and entertaining enough. But it always remains more grand tourer than out-and-out sports machine. 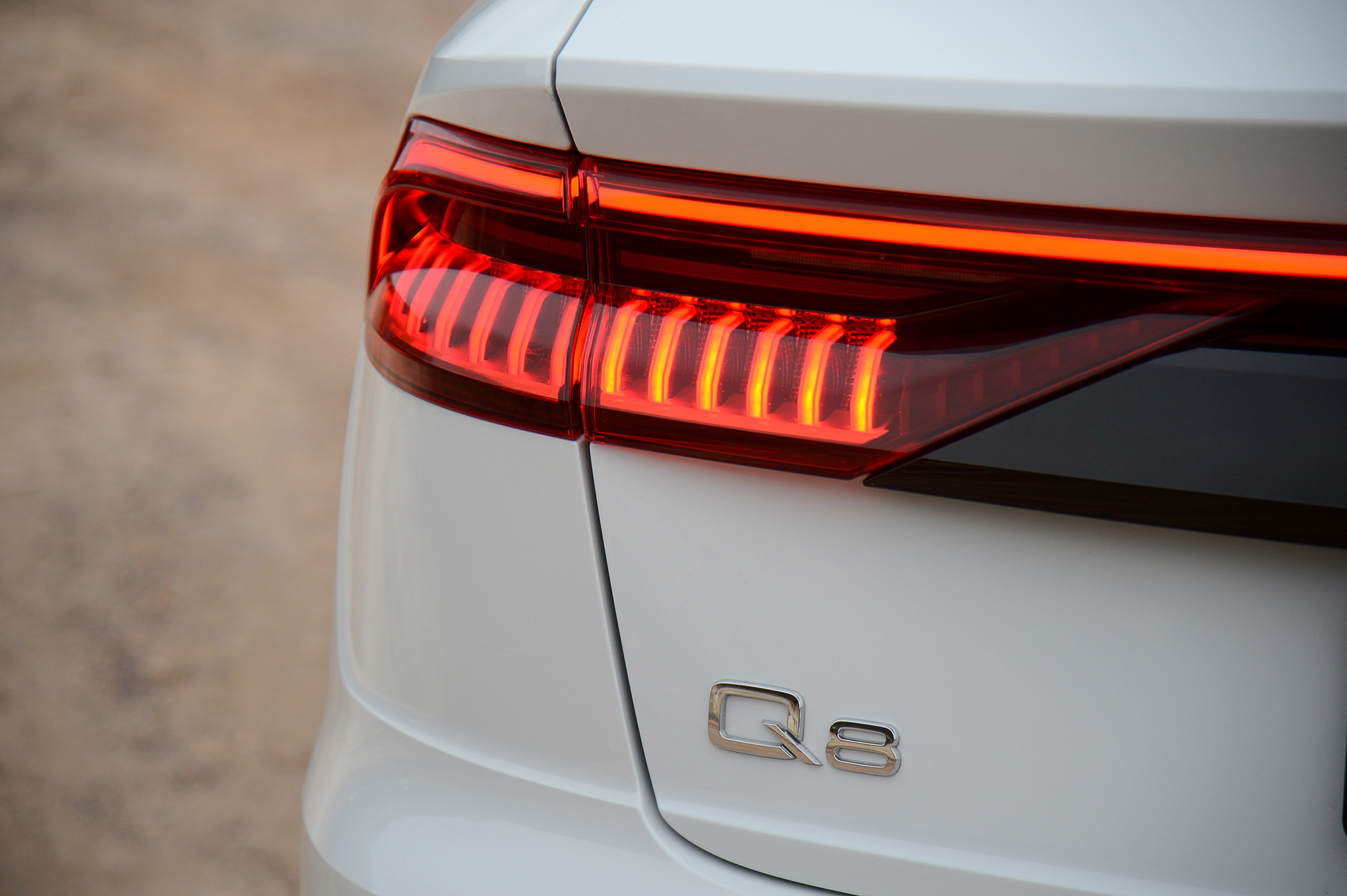 The Q8 is an important car for the Audi brand, both globally and in SA. It gives the marque a competitor in a segment currently only occupied by the BMW X6 and Mercedes-Benz GLE Coupé, with Porsche’s Cayenne Coupé due here soon.

More pertinently, it introduces an all-new design approach, and a user interface that is right at the top of the game. Both aspects will be echoed in other newcomers to the Audi fold going forward, including midlife updates to existing models such as the Q7. 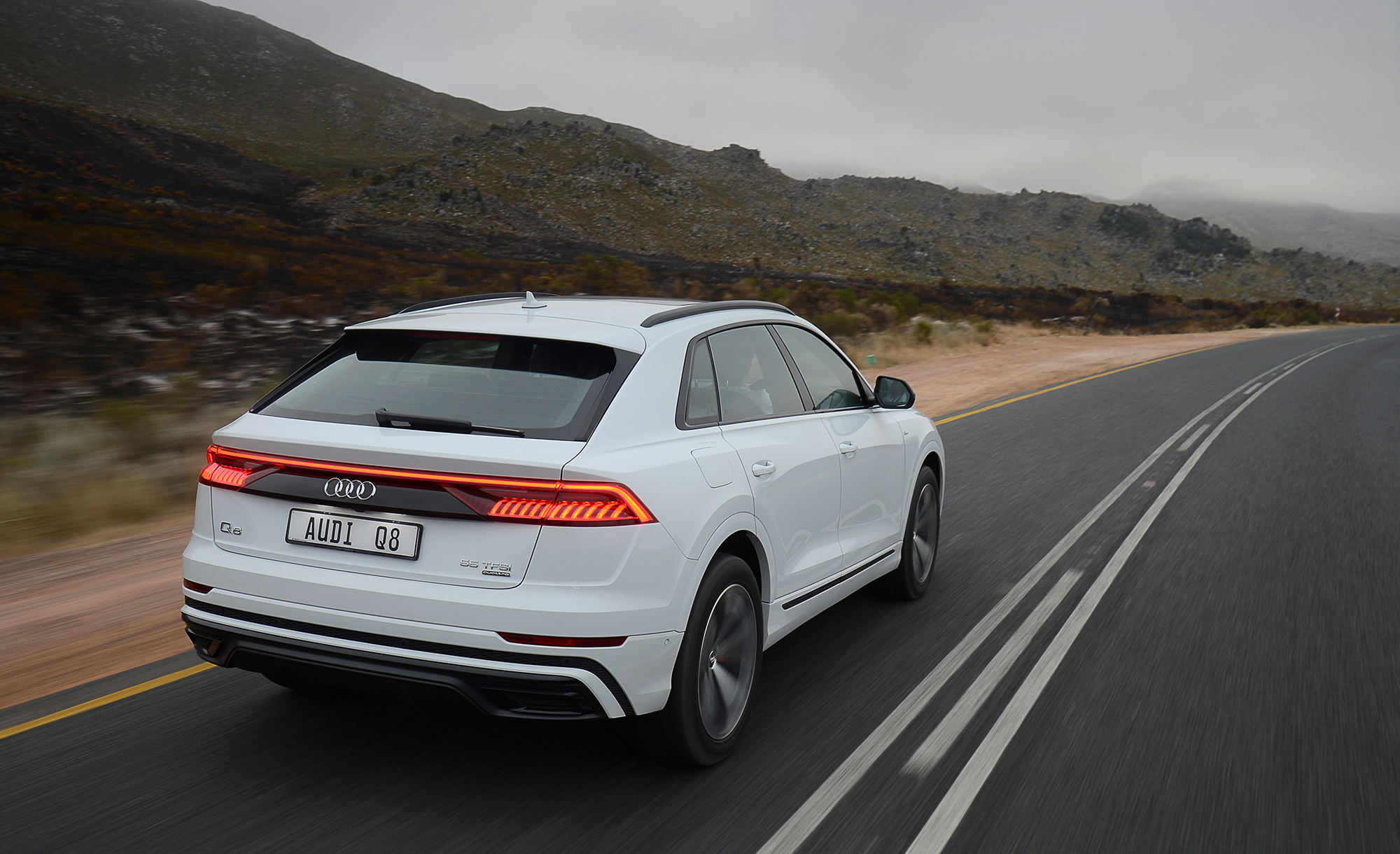 The first new Audi to arrive in SA in almost two years also confirms that the brand is alive and well here – and that it has some interesting aces up its sleeve. DM