Apartheid legacy of urban sprawl is the challenge our cities face 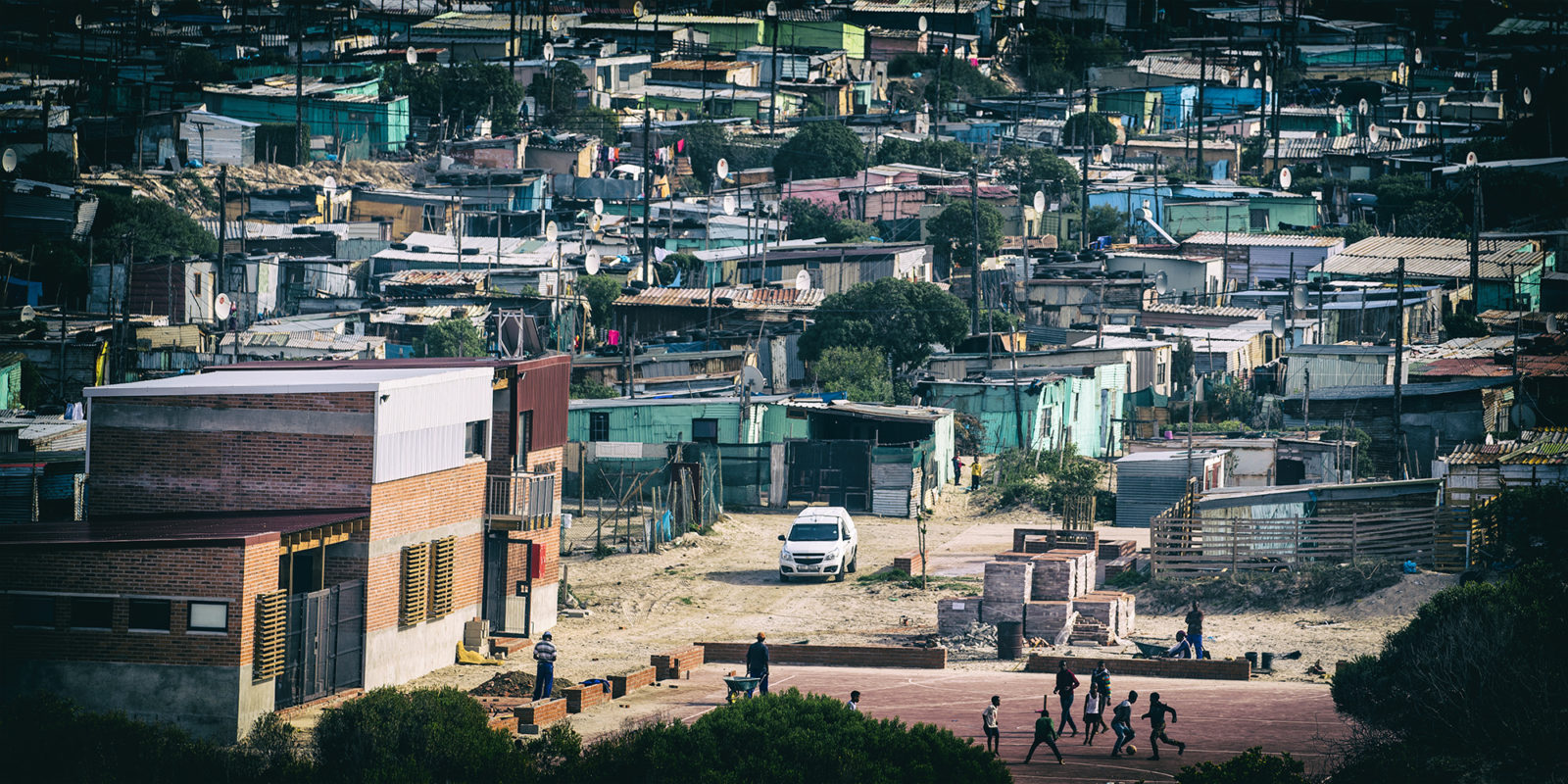 South Africa needs to harness the dynamism of its great cities. The country cannot resolve its most pressing problems, including unemployment of almost 10-million people, without faster and more labour-intensive economic growth.

As elections approach, political parties need to set out their visions for a national revival in which the opportunities for poor people to move out of poverty are transformed. Turning cities into generators of hope and opportunity is the most effective way to achieve this.

No country has ever become rich without urbanising. Cities are productive because they contain high population densities. This allows greater scope for thriving businesses to emerge and grow. Cities also make it easier to provide infrastructure and public services to large numbers of citizens.

Two-thirds of South Africans live in urban areas, up from just half in 1990. Poor rural people who move to the cities suffer immediate hardship and dislocation, but most of them quickly experience an improvement in their lives. Urban employment, even where it is low paid, is a crucial route out of poverty. Johannesburg and Cape Town alone have created a quarter of a million new jobs over the past three years.

Too many South African policymakers are still “reluctant urbanisers” who believe that cities should not grow. This is the wrong approach. The issue is not how to prevent urbanisation but how to realise its potential.

Citizens should ask political parties key questions about their urban growth strategies. How do you plan to encourage investment and raise levels of growth in major cities? What is your strategy for urban infrastructure spending? How will you work with private business to promote urban-led growth?

None of the progress we all desire can be achieved without tackling the legacies of the past. Apartheid left behind urban sprawl, with poor residents on the urban periphery, far from employment and economic opportunity.

Nearly four-million “RDP houses” have increased the housing stock, but the policy has reinforced urban sprawl and limited citizens’ prospects by building on cheap land on the outskirts of cities.

Cities can be dragged down by infrastructure shortfalls, pollution, crime and congestion. To ensure that our cities become places of opportunity rather than poverty, we need to do better at managing them. Cities need affordable housing located close to economic opportunities, effective crime reduction, affordable citywide public transport systems, and a facilitative environment that helps businesses of all sizes to thrive. 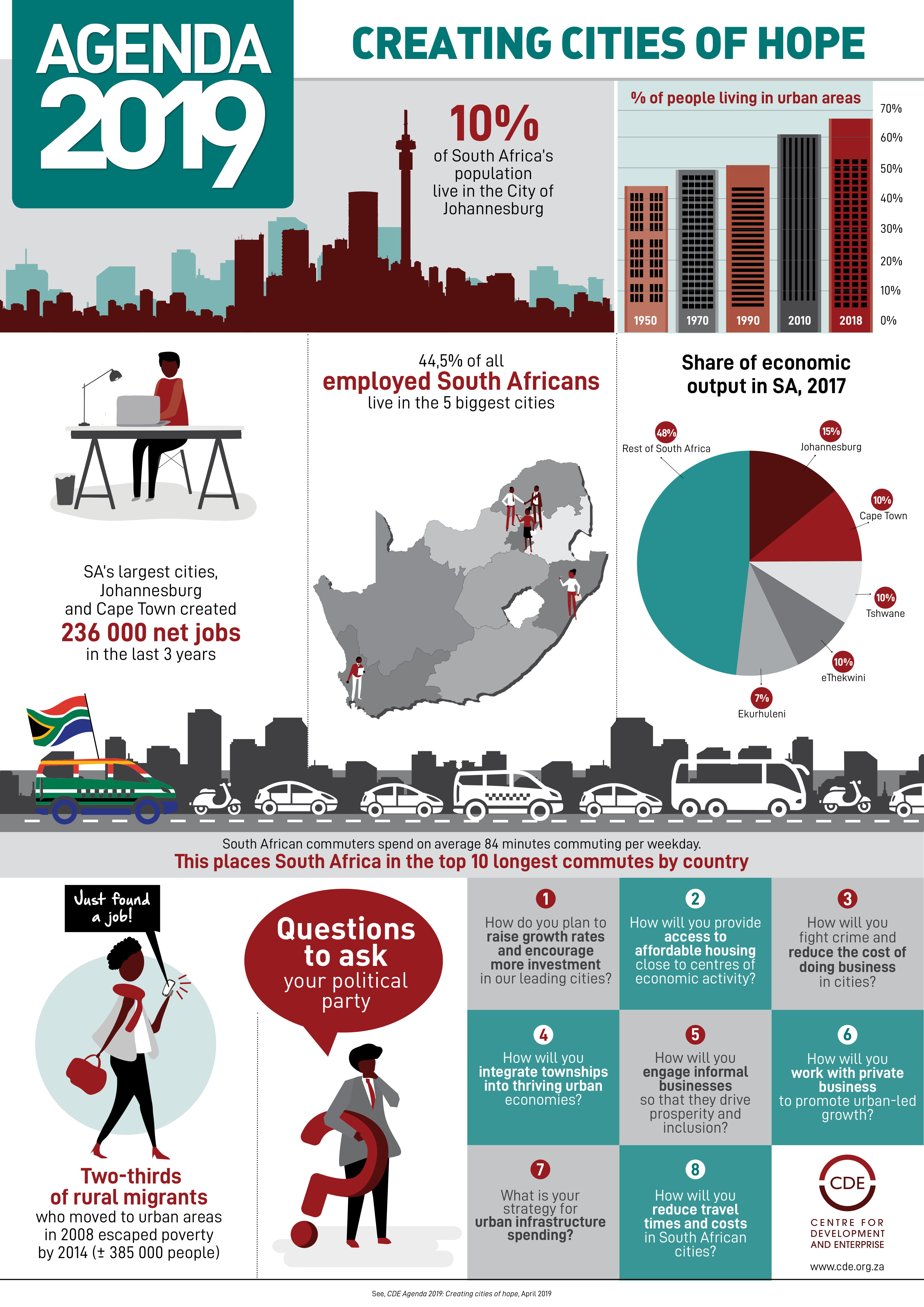 We need to ask political parties with further practical questions. How will you fight crime and reduce the cost of doing business in cities? What is your plan to provide access to affordable housing close to centres of economic activity? How will you reduce travel times and costs for commuters and job seekers?

Profound changes in the way national policymakers view cities will be required to gear urban areas up for inclusive development.

City governments must be encouraged to put growth first. Currently, mayors face protests if they fail to deliver utility services, but few sanctions if they fail to deliver growth. Funding from the national government is based on the size of a population rather than being weighted by performance. Mayors gain little from faster growth so there is little incentive for them to stimulate it. This must change.

Cities also need greater power. They have been treated as the junior partners of the national and provincial government for too long. They need greater control over city personnel and their local business environment. They must have a bigger say in national policies that affect urban-led growth. Many if not all of the eight metropolitan governments have the capacity to start right now.

Markets must drive city growth. Successful development needs the market and the city to come together. The city brings scale, while properly functioning markets ensure efficient allocation. Business is the most dynamic element of the urban community, and the key generator of prosperity and development.

City centres, suburbs, and townships need to be bound together into single urban development systems. There are certainly specific actions to be taken in townships to help local economies grow, for example, deregulation and the provision of more land for development. But better integration into a wider city economy will bring bigger and more sustainable benefits for local entrepreneurs and citizens than programmes designed for township economies on their own.

There are further immediate steps that parties can take to turn our urban areas in cities of hope. Urbanisation must be embraced rather than feared, and political leaders should celebrate the growth of large conurbations in which people are more likely to enjoy prosperous lives.

The financing of metropolitan authorities needs to be rethought. Cities need more buoyant revenue-raising powers. And their revenue must be linked to growth outcomes to encourage them to pursue pro-growth policies.

Meanwhile, each city must be empowered to take responsibility for attracting investment. Cities need an exemption from certain national policies so that they can shape their local investment climate. They need the power to choose the regulatory, skills, and labour market reforms that they believe will best attract companies to become their partners.

State-Owned Enterprises take many investment decisions that affect cities’ growth prospects, and the voice of major metropolitan authorities need to be heard by them. SOEs also own centrally located urban land that is essential for road-building, new development, and expanded human settlements.

Political parties need to prioritise densification in cities. Cities must encourage the building of multiple housing units on single sites, use centrally located land for low-income settlements, and involve communities in upgrading programmes.

Above all, political parties must be willing to drive local growth coalitions. The main city actors in politics, business and government should be obliged by their parties to form enduring partnerships, and to interact routinely and systematically. Such coalitions will become even more important in an era of a coalition government.

Without urban-led growth, South Africa simply cannot prosper. In a democratic society, it is right that different parties will present their own plans to realise the potential of cities at election time. What is no longer acceptable is for parties to have no credible or coherent plans to create cities of hope. DM

Ann Bernstein is head of the Centre for Development and Enterprise. This article is based on a new CDE report, Agenda 2019: Creating Cities of Hope, www, cde.org.za