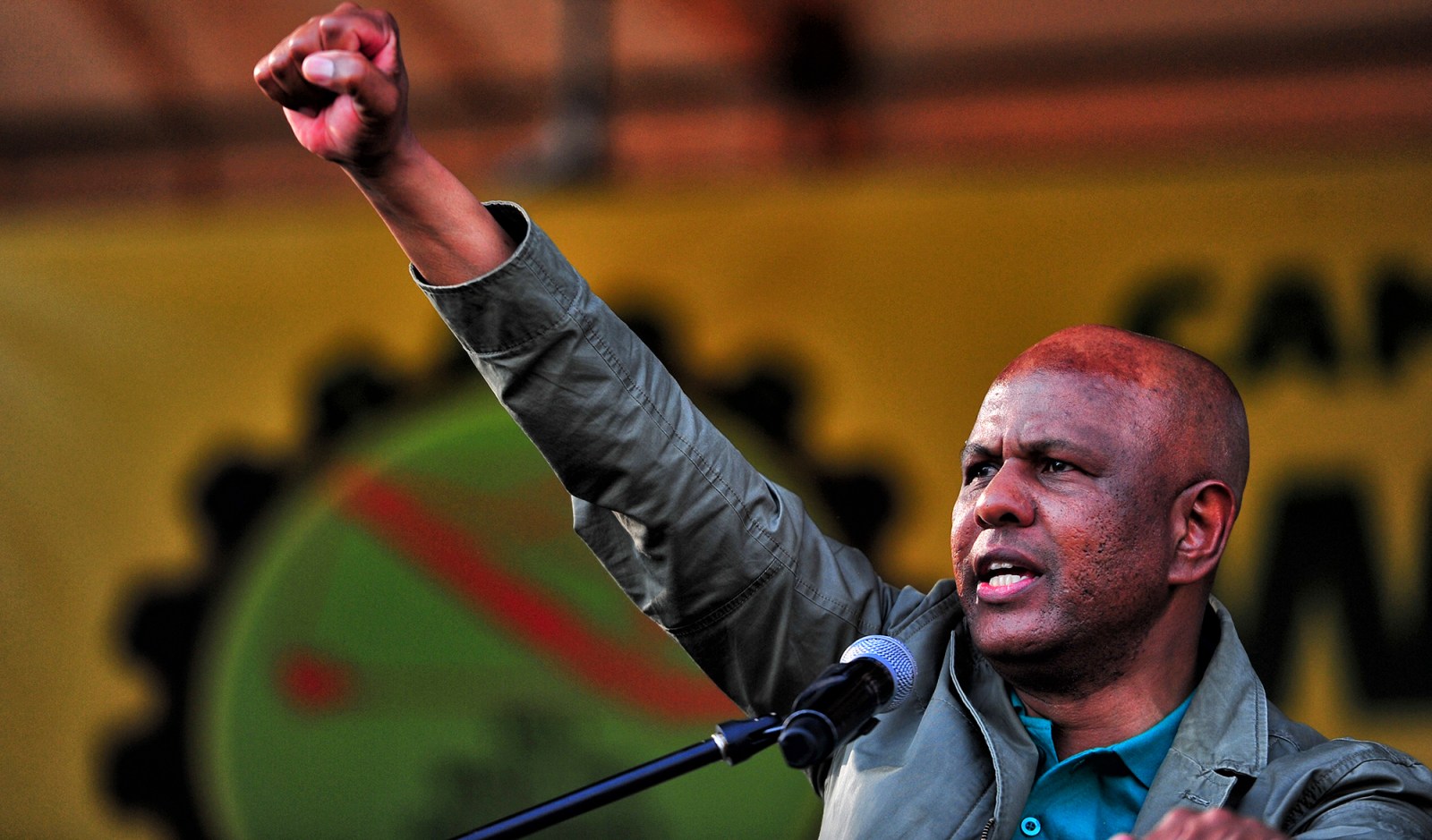 Association of Mineworkers and Construction Union president Joseph Mathunjwa addresses the audience during an event to commemorate the sixth anniversary of the Marikana massacre on August 16, 2018 in Rustenburg, South Africa. (Photo by Gallo Image / City Press / Tebogo Letsie)

The Department of Labour’s threat to deregister the Association of Mineworkers and Construction Union is a cause for concern. It cannot be that more than 200,000 members be left without a bona fide union because Amcu is more than a year late with the holding of its national congress. A failure to resolve this matter will only further entrench the view that the department is intent on punishing those it sees as opposed to the ANC.

The Association of Mineworkers and Construction Union (Amcu) undoubtedly needs to act in accordance with its own constitution and ensure that democracy functions at all levels. Amcu does have a constitution that is better than most of its counterparts and there are generally acceptable levels of compliance. Are there problems — more specifically, could the union be more worker-controlled? Is there a union in the country that has similar problems? The answer is certainly yes, on both counts.

It is the job of Amcu members to ensure that the constitution is adhered to, not some outside force such as the Department of Labour, that acts as a police force, insisting that it has the final say on the matter. The big man syndrome in operation in Amcu and many other unions across all our federations is clearly a factor that undermines internal union democracy, but it can also obscure the bigger picture.

Trade unions are best judged by their level of engagement and activity in the workplace. In terms of the mines, particularly the platinum sector, a robust relationship exists between the shop stewards and shaft management. Amcu, in short, functions well in comparison to other mining unions at the workplace and this is where it matters most for your rank and file member.

This is why the union has continued to grow in the past six years and Joseph Mathunjwa remains popular, because contrary to what the department says, it is a genuine trade union and a highly active one at that.

The Amcu leader remains well respected because he made good on his promise to fight for a living wage in the platinum sector and fought the longest strike in South African labour history, winning a partial victory for mineworkers in the process. Losing the recent five-month strike at Sibanye’s gold mines is not enough for him to have lost the Amcu membership’s trust in his leadership. If that what the department is betting on, it had best reconsider.

His popularity is also rooted in his willingness to speak truth to power when it came to the Marikana massacre. Readers do not need to be reminded that the killing of mineworkers at Lonmin are viewed and characterised by most intelligent and neutral observers as a massacre, a one-sided affair that saw the state’s monopoly on deadly weapons of violence put to indiscriminate use.

Once again the heavy-handed and punitive role of the state is being brought to the fore to penalise those standing up to South African capitalism, a system that remains rapacious to its core.

Seventeen mineworkers face trial next week on charges that relate to the August 2012 Lonmin dispute. They face serious public violence charges despite the state’s evidence in many instances being thin. It is an absurdity that while the Independent Police Investigative Directorate has recommended that more than 70 policers face charges for their ghastly actions on the 16 August 2012, only a handful of these officers have seen the inside of the courtroom.

It would be foolhardy for any trade unions to stand aside if the department decides to press on with its decision to de-register the union.

The sectarianism often visible across our trade union federations will need to give way to active solidarity, not only with Amcu’s fight with the state over deregistration, but also with the mineworkers who collectively face the prospect of draconian prison sentences. DM