Gender-based violence in the spotlight of EFF women’s march 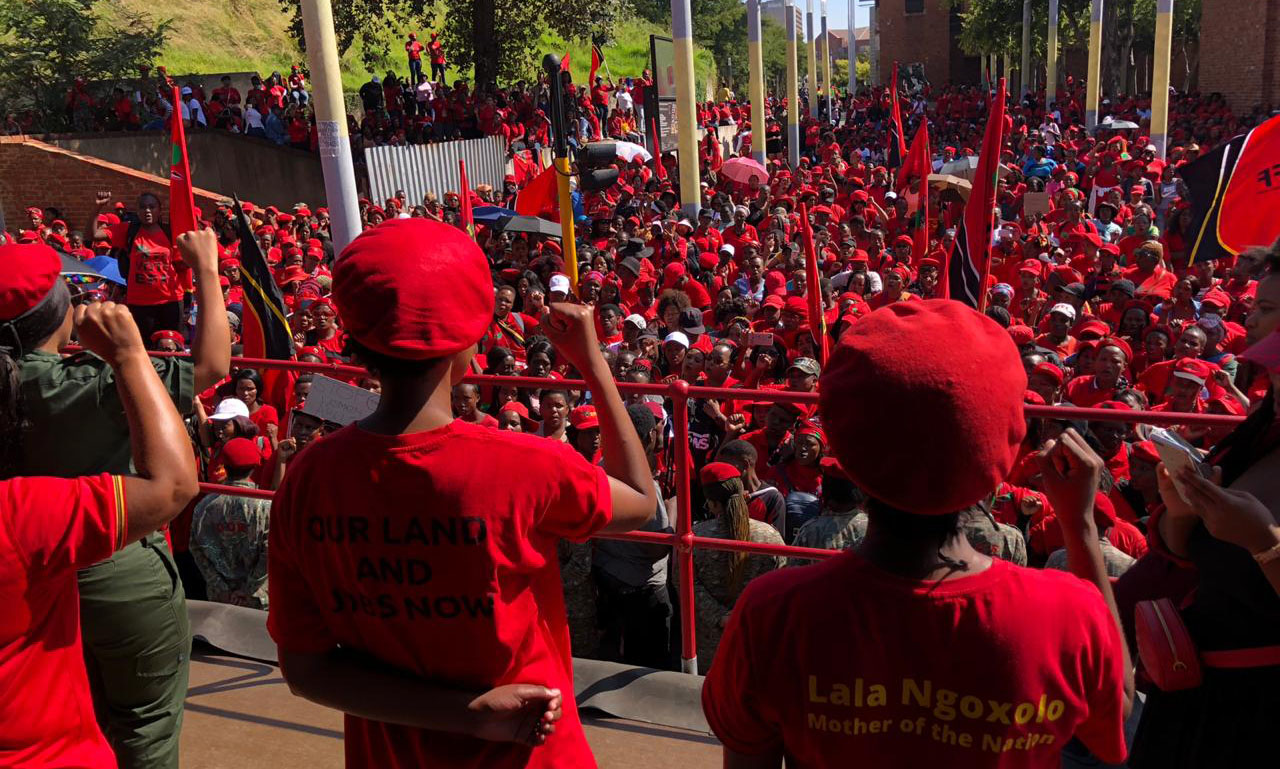 About a thousand women, under the banner of the Economic Freedom Fighters, marched to the Constitutional Court to hand over a memorandum asking for gender-based violence to be properly addressed and dealt with by the judicial system.

Survivors of gender-based violence are still being poorly treated by the judicial system and this needs to change. This was the call made by women members and supporters of the EFF on Thursday.

“Women and children are still abused by their employees, men, parents, white colonial masters and the corrupt government of the ANC. On top of that they get victimised by cops,” said Chairperson of the EFF Gauteng and organiser of the event, Mandisa Mashego, to the throng of women who had gathered at Mary Fitzgerald Square in Newtown, Johannesburg on Thursday.

The women came from all over Gauteng to take part in the march to raise awareness of how women are treated in the judiciary system when it comes to gender-based violence (GBV).

They handed over a memorandum with a list of demands to the Constitutional Court which, among other issues raised, highlighted their feelings towards the ANC-led government and its inability to eradicate GBV.

EFF Member, Natasha Ntlangwini said the memorandum also called for officials in the judicial system to be retrained and equipped to better handle cases GBV.

“They must come here and acknowledge the mistake on how they abuse women when they go and report rape cases. Our women are terrified to go to our courts. In fact, they are more terrified of courts then they are of police stations,” said Ntlangwini.

In its memorandum, the women said as an EFF government they would amend existing legislation to include harsher minimum sentences for crimes committed with hatred as motivation, such as corrective rape.

Other issues that needed to be addressed included the “social ills that fuel gender-based violence” especially against women, children, LGBTQIA+ communities and people who live with disabilities.

The memorandum also calls for attempted murder to be automatically listed as an additional charge when sexual crimes are committed against children and the elderly. It also calls on the courts to produce a sexual offenders booklet which must include full identification details and a picture of the perpetrator and which must be made public.

Women who attended the march agreed with the measures that the EFF wants to take.

“I am here in support because women’s rights need to be re-evaluated. Women’s rights are neglected. I appreciate the fact that the EFF is showing support to something that is neglected in South Africa,” said Natasha Hatfield.

“Today we are here standing together as women for each other because we have always been marginalised. We have always been victimised and are products of oppression so now it’s time that women stand up for themselves and face this oppression that we have been going through. As a black woman in South Africa, you don’t only face patriarchy, we also face racial issues, gender issues and gender politics. It’s also worse because I am a young woman in South Africa. So we hear of these movements and we come and we say to hell with gender-based violence,” said Palesa Sitsuwi, a student from the University of Johannesburg.

Throughout the woman held hands as they sang and marched through the streets. No men allowed to take part in the march.

“Look next to you. If you see a man next to you tell him to leave, as he has no place here. This is a march for us [women],” Mashego said to the crowd before it got underway.