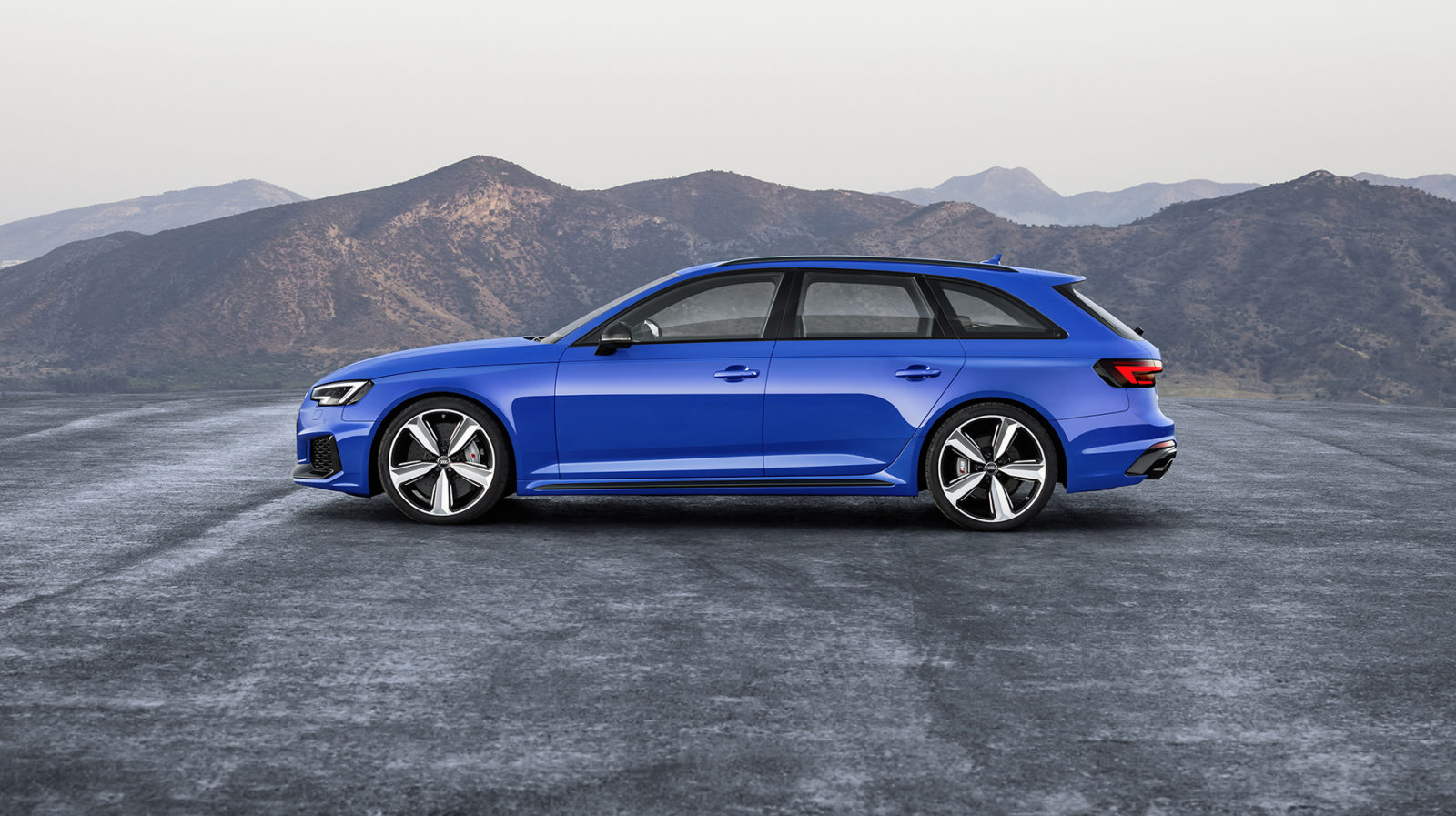 The station wagon is all but extinct in South Africa, yet another victim of the mighty SUV’s rise to prominence. Fortunately, a few examples remain to remind us what makes station wagons great – and in this case, special. Very special…

I’m on one of those narrow country roads so far off the beaten track that it’s been all but forgotten, and is now mostly plied by local traffic. There’s the occasional dusty bakkie, a minibus taxi here and there, and sometimes, a bug-splattered repmobile.

I suppose a station wagon wouldn’t look out of place in this sleepy hinterland, either. But the example I’m driving isn’t exactly typical of the genre.

Most of the time, it’s just me and the ribbon of tar unwinding ahead – and right now, it’s unwinding with a decidedly indecent turn of speed. You know you’re going like the clappers when the road ahead starts looking like a velocity-blurred single track …

Even straight-line driving requires concentration, the wheel squirming in your hands as the wagon bucks and shimmies its way over the bumpy, patched and cracked macadam. We’re light years removed from the smooth surface of the autobahn here!

Even so, behind the wheel of the latest Audi RS4 Avant, the experience is exhilarating rather than intimidating. Yes, it’s a station wagon, but one with the heart of a sports car, and the DNA of a racing machine.

Wider, lower – and a lot meaner – the RS4 Avant is about as far removed from your normal estate car as a raptor is from a budgie. It’s a study in rippling automotive muscle, with bulges, flares, wings and spoilers all designed to best cope with the drivetrain’s considerable potential.

Even the staunchest station wagon antagonist will have to agree that the RS4 Avant is an impressive beast. Hunkered down on its stiffer, lower suspension, its 20-inch wheels barely contained by the flared wheel arches, this car is all about performance.

Utility and practicality, the traditional ho-hum hallmarks underpinning the station wagon ethos, take a back seat here. Instead, the RS4 Avant has been fettled to deliver uncompromising dynamics. 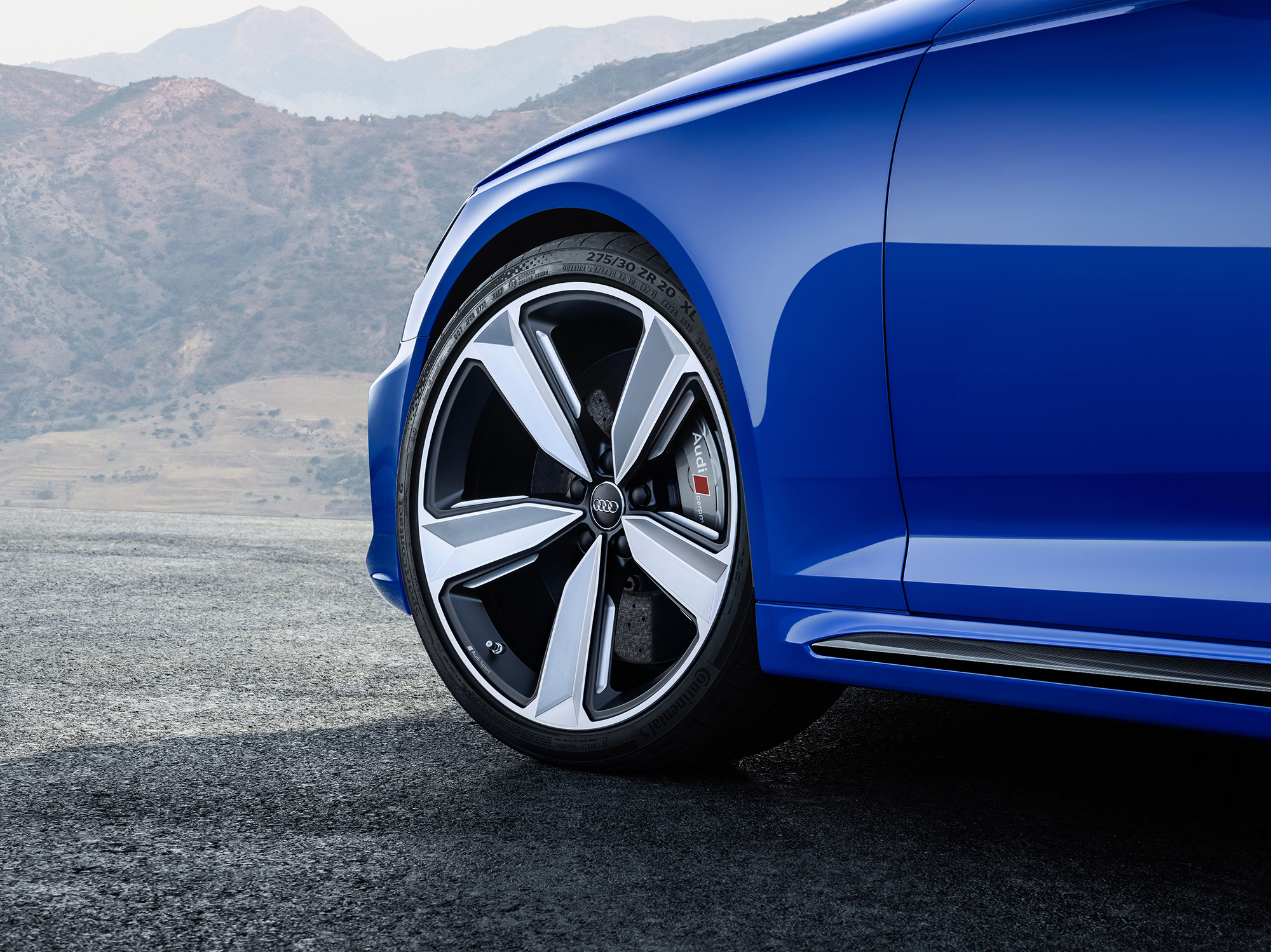 Admittedly, fusing the space and versatility of an estate car with hardcore performance attributes seems both unusual and a little pointless.

But it does achieve what your average sports car can’t: luxurious accommodation for four and a full 505 litres of cargo space, wrapped in a package that’s as rapid and engaging as any thoroughbred performance machine.

This RS4 Avant is the fifth generation of go-faster station wagons from the Audi stable. The first was the now rare and sought-after RS2 Avant, co-engineered with Porsche, and a wolf in sheep’s clothing if there ever was one.

This latest RS4 Avant is all wolf: massive honeycomb-black air intakes dwarf the narrow LED headlights, while deep sills seem to suck the car even lower to the ground. At the rear, the gutter-sized exhausts are the dominating element, jutting purposefully from a black diffuser. 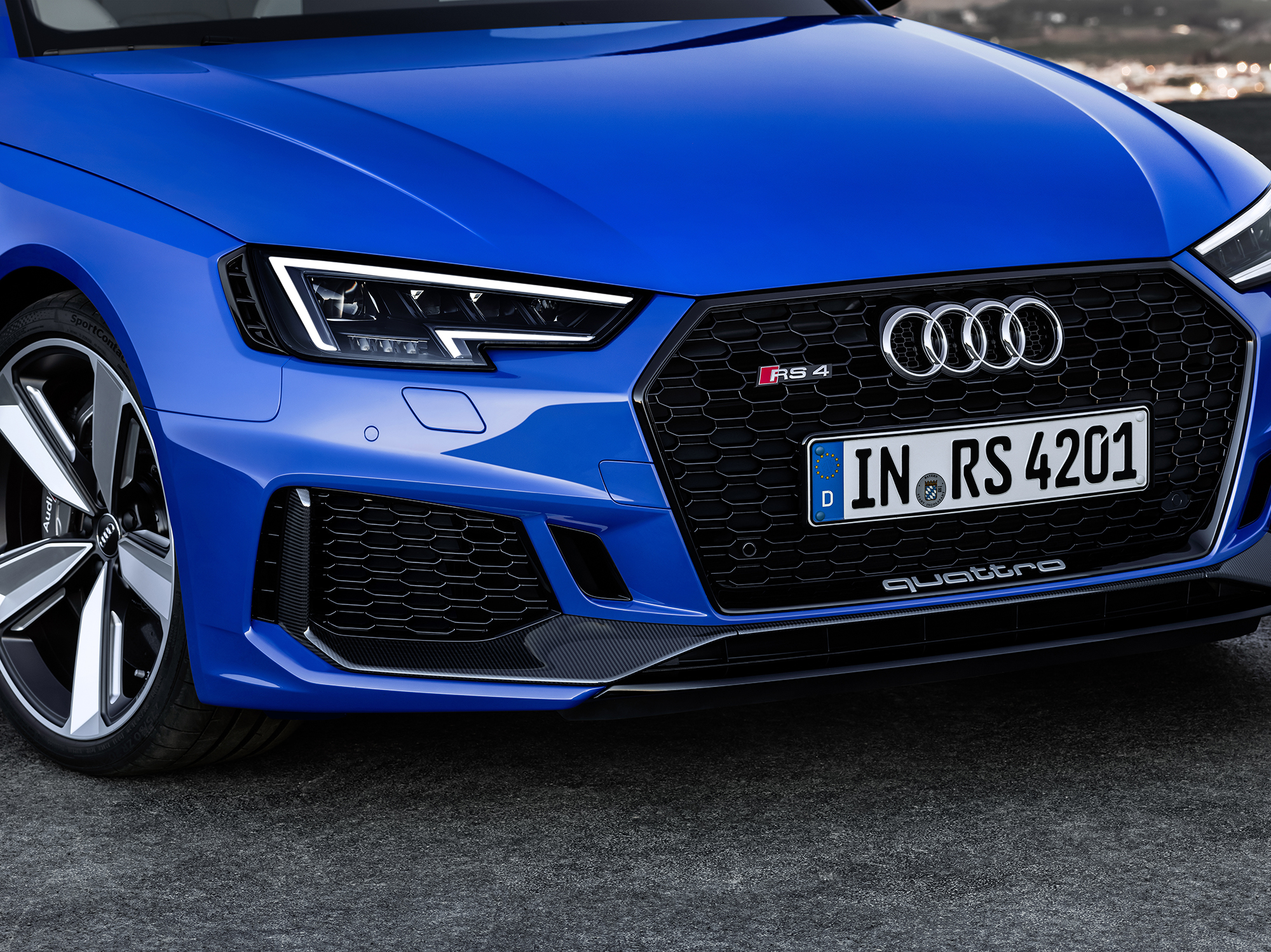 Wolf or not, this is still unmistakably an estate car: the elongated roofline, the slanted tailgate, the roof rails are all pure station wagon. But what a wagon!

Under the bonnet, pride of place belongs to a high-tech twin-turbo V6. The 2.9-litre unit punches out 331 kW of max power (the same as the previous model’s larger, heavier V8), combined with an eyeball-flattening 600Nm of torque.

All that urge is transferred to both front and rear axles via an eight-speed Tiptronic auto gearbox and quattro all-wheel drive. Auto gearbox? Yes, but engineered to offer rapid-fire cog swaps, with shift paddles encouraging manual changes. 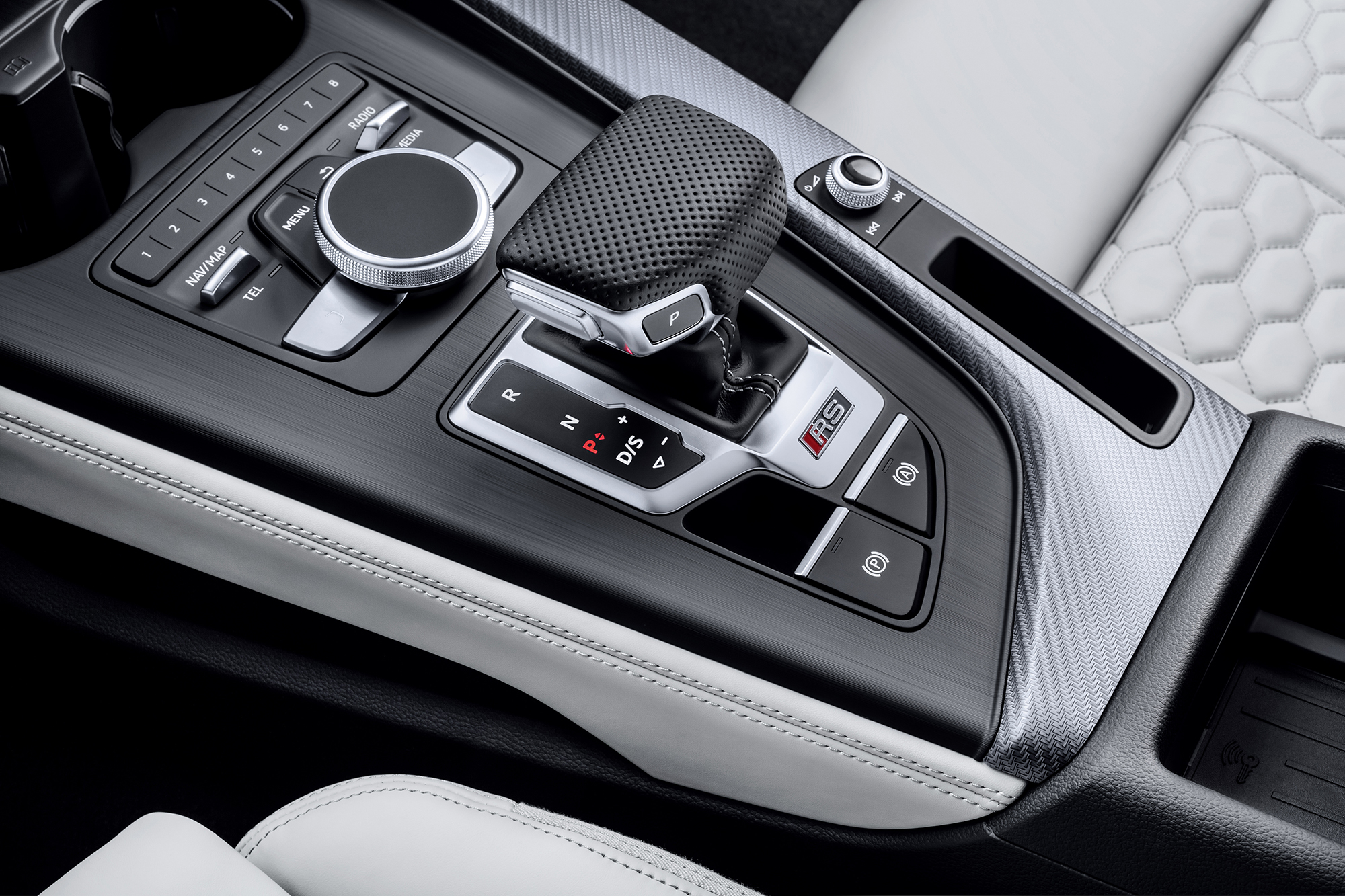 Quattro ensures optimum traction, dividing power between front and rear axles, and even between left and right wheels, depending on the grip on offer. It’s a seamless process, endowing the RS4 Avant with a level of composure and control that can seem gravity-defying.

Going fast is one thing, but you also have to slow down. The Audi gets massive perforated steel discs up front, linked to six-pot callipers, while vented discs and four-pot callipers are installed on the rear wheels. 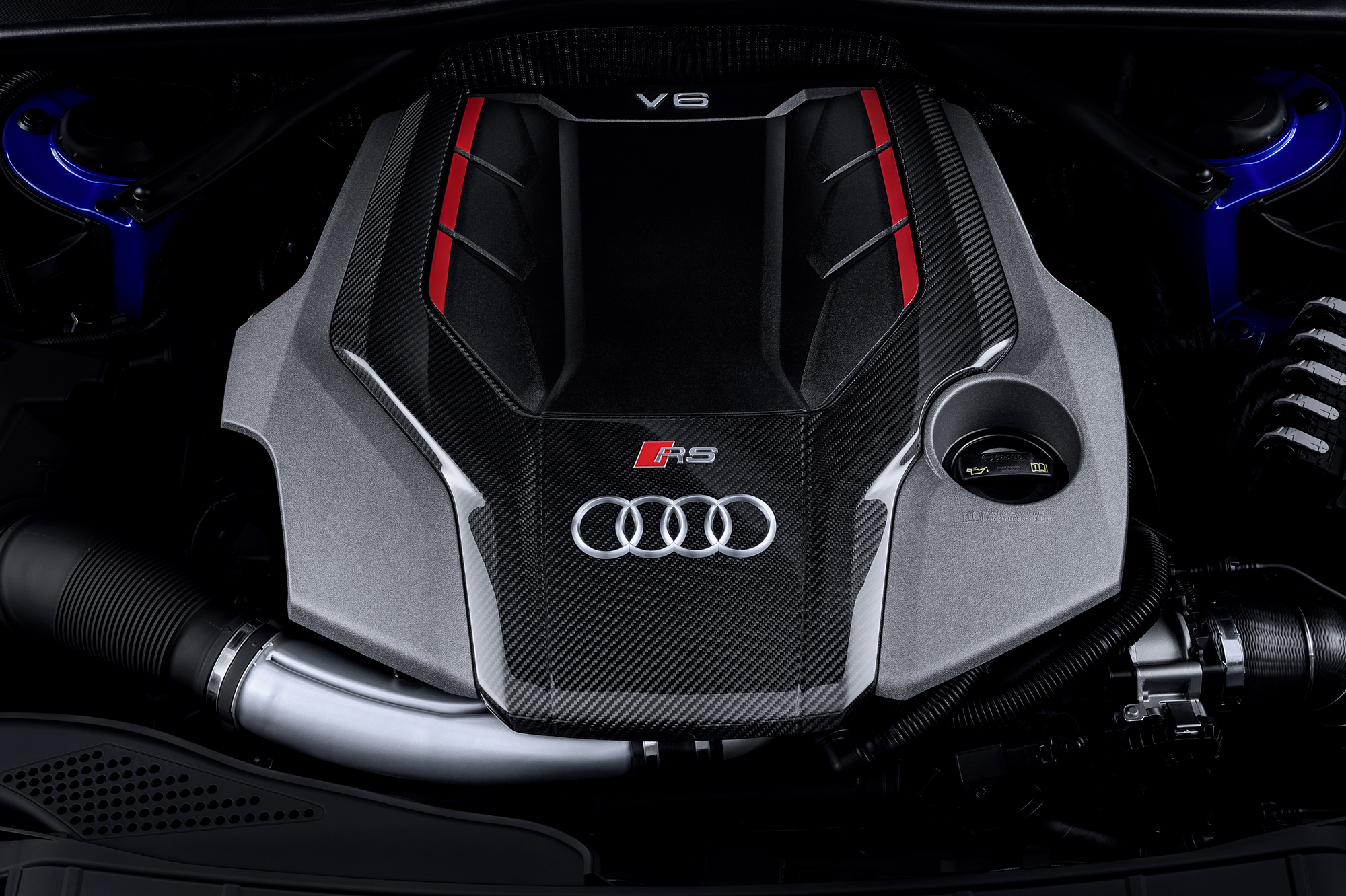 The cockpit continues the performance theme but adds a healthy dash of luxury. Up front, high-backed, heavily bolstered bucket seats provide both comfort and support, while a thick-rimmed steering wheel frames an entirely digital instrument display.

The latter can be configured to suit personal preference and even incorporates a shift indicator. The switchgear arrangement is restrained and intuitive, but the infotainment display looks a little incongruous perched on top of the dashboard, rather than being integrated with the centre stack.

There’s plenty of space, although those big front seats do rob rear occupants of legroom. That said, the rear bench is comfortable enough, while that large cargo bay at the rear will swallow a family’s holiday luggage with ease. 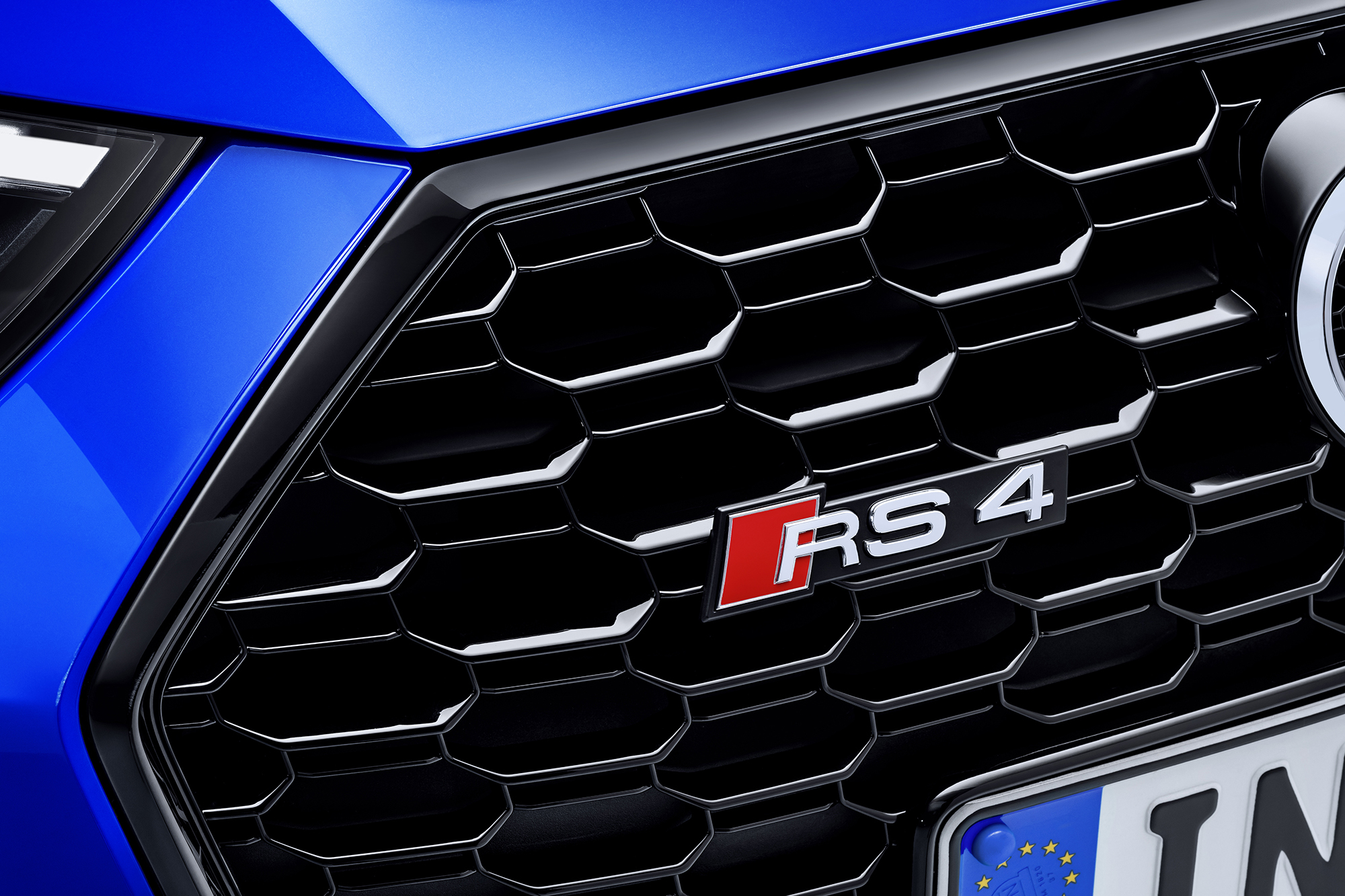 Even so, the test car was still loaded with more than R160,000’s worth of options, including seat heating, metallic paint, gloss black detailing, and a raft of driver assistance systems comprising adaptive cruise control, lane keeping assistance, and traffic jam assist.

Right now, though, I’m revelling in the RS4 Avant’s considerable dynamic talents. The road ahead has become twisty and undulating, swapping treacherous blind rises and suspension-compacting dips with fast sweeps that suddenly tighten into off-camber corners. 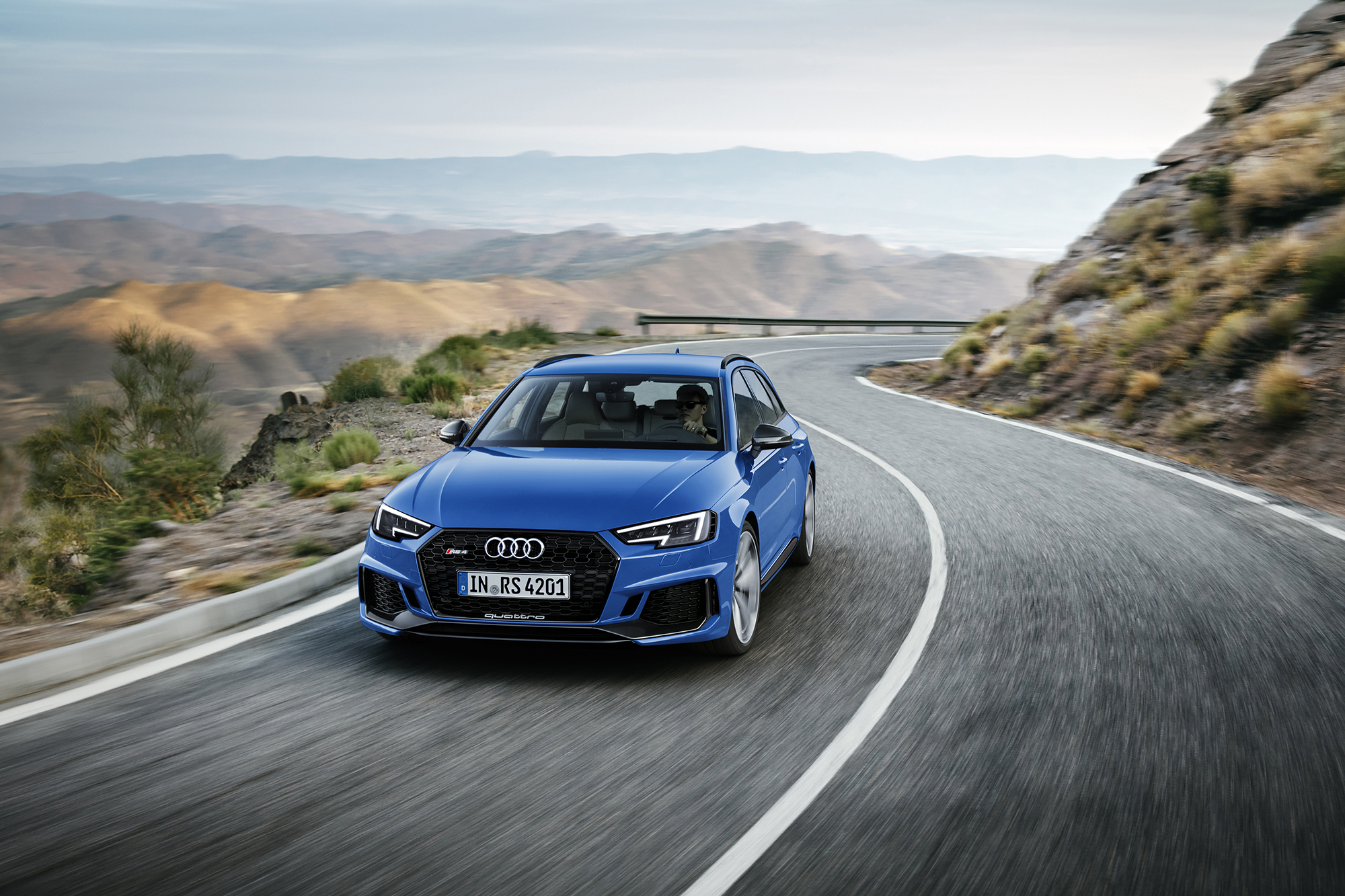 At these speeds, the driving experience takes on a PlayStation-like quality: you’re focused purely on the action ahead, the road framed by the deep green tunnel of the surrounding Bushveld.

The Audi communicates its intentions with the all the unequivocal directness of a racing machine: the chassis transmits every change of direction, the engine’s howl is visceral in its intensity, and the steering is alive in your hands.

Driver and car become one as the Audi charges towards the horizon. It’s an intense but hugely satisfying experience, underpinned by the wagon’s exceptional performance. 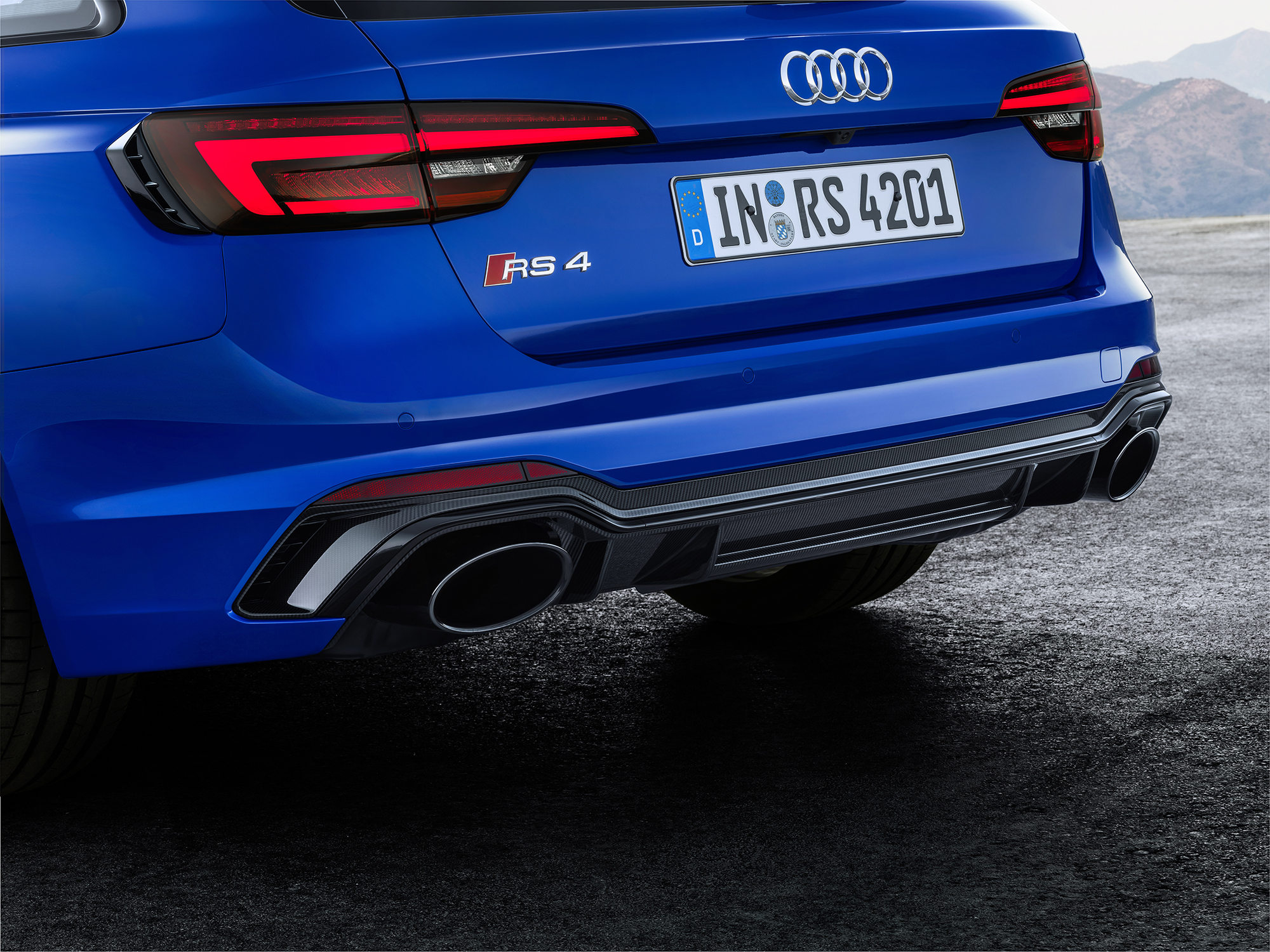 For the record, it covers the 0-100km/h sprint in a smidgen over 4sec, while top speed is limited to 250km/h. But it’s the way the Audi reacts to throttle input, its ability to accelerate away from almost any speed, and its outright composure regardless of what G-forces it’s subjected to, that really impresses.

Besides, few cars – even sports cars – can cover ground from point to point as rapidly as this one, while still cosseting its occupants in comfort and style.

Of course, you don’t have to go hell for leather – at least not all of the time – to appreciate the RS4 Avant. It’s quite happy to potter around town at near-idling speeds or to obediently cruise along at highway speeds on the open road. 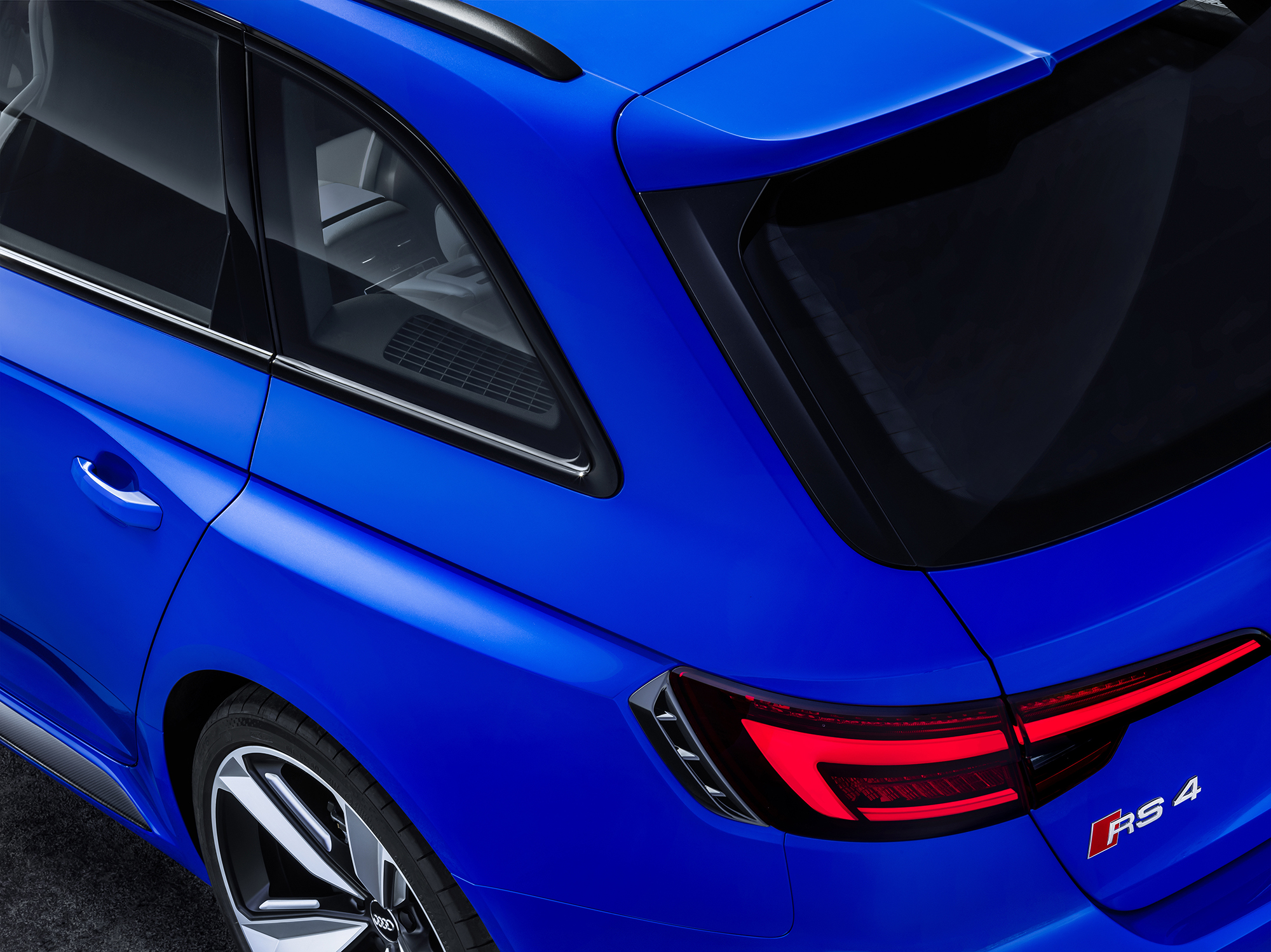 I’ve reached the end of my remote little road, and turn onto a more mainstream route. It’s time to set the gearbox to automatic, engage the adaptive cruise control, dial in my destination on the satnav, and find my favourite tunes on Spotify.

But there’s a certain satisfaction in knowing that, next time the opportunity presents itself, the RS4 Avant will be ready to rise to the challenge, to swap its suave, dashing Dr Jekyll image for the rather more aggressive mien of Mr Hyde …

All that attitude comes at a price.