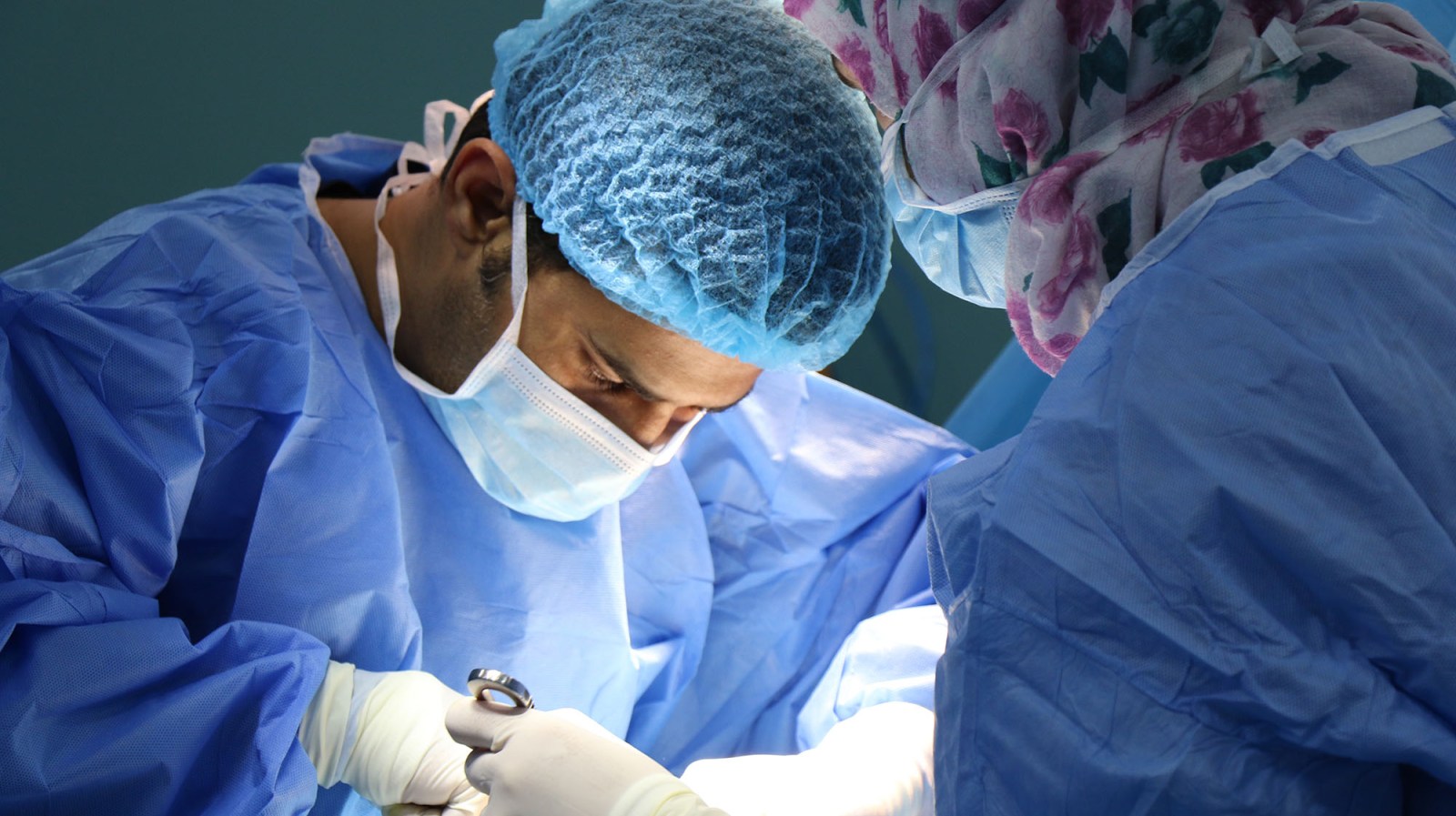 How ‘universal’ is the universal health coverage envisaged by the National Health Insurance scheme? The draft law contains xenophobic rhetoric, but the country’s main political parties offer very few alternatives in the manifestos.

The ANC’s much-contested National Health Insurance (NHI) scheme has been a talking point for politicians for close to two decades since being published in the Government Gazette in 2003.

According to this model, the government will become the sole funder and buyer of health services and compulsory payments will be deducted from the salaries of all working people.

One of the big questions about the NHI is where the money will come from to pay for universal coverage, given how few taxpayers there are.

Many experts are concerned that the current version of the NHI is unworkable and that it also has far-reaching consequences for foreign nationals.

According to the bill, the NHI will be available for “all South Africans irrespective of their socio-economic status, including residents with long-term visas”. The fund will also require patients to be “registered and be identifiable at the point of use” and will “need to register through the Department of Home Affairs’ identification system” in order to access services through the country’s iteration of universal healthcare.

Undocumented immigrants, refugees and asylum seekers are excluded, and the only non-South Africans who are accommodated are “those in possession of a long-term residence visa”.

In January, the Gauteng and KwaZulu-Natal health departments issued circulars, on the instruction of the national office, demanding foreign patients to pay in full for health services. The circulars were retracted, but the language it used is in line with what the NHI is calling for, which is the exclusion of foreign nationals.

The bill implies that individuals who are asylum seekers or even those who have work permits won’t be eligible for the NHI, argues Jo Vearey, an associate professor with the African Centre for Migration and Society at Wits University.

“Non-nationals are currently facing huge challenges accessing basic healthcare. Not only is it sending a dangerous political message, it potentially has consequences for broader public health concerns,” she says.

In its current form, the NHI suggests a “regression of rights for non-nationals”, says Vearey. It suggests that only documented refugees out of all non-nationals would be covered by the NHI. This has concerned health experts, who called the language the policy uses a “slippery slope of xenophobia”.

More dangerously, these xenophobic sentiments in the run-up to elections are common across all party lines — from the Democratic Alliance’s “secure our borders” stance and the party’s City of Johannesburg Mayor Herman Mashaba’s utterances about foreign nationals, to Health Minister Aaron Motsoaledi’s unverified “anecdotal” evidence that foreign nationals “overburden” our health system.

But the ANC national communication manager, Cornelius Monama says that the party’s model of universal healthcare is misunderstood and it is not meant to be the “panacea for all our healthcare challenges”.

“The ANC proposed the NHI as a funding formula for a (universal) healthcare system. It’s not the hallmark of the system,” Monama told Health-e. “The NHI is a medical aid scheme, a financial instrument of the system, that pays for services rendered.”

According to the draft law, primary healthcare will be the “heartbeat of the NHI”, which means that, to contain costs, local clinics — instead of hospitals — will be the “first level of contact” for South Africans.

But health experts argue that unless there is a revolution in the distribution and number of health professionals — especially in rural areas — the NHI will fail. According to the latest South African Health Review report, the NHI will remain a “pipe dream” if human resources for health are not urgently addressed.

About 44% of the country’s population lives in rural areas, the Department of Health data show. But only 12% of doctors and 19% of nurses in the public sector work in those areas. Meanwhile, about only 35 out of 1,200 medical students that graduate in the country annually end up working in rural areas in the longer term.

“The NHI is good in principle, but the realities around what is feasible and if we can ever deliver on it is at the heart of the debate. We know that the public healthcare system at the moment is struggling, not necessarily because it’s under-resourced in terms of finance, (but because) of the mismanagement of funds and huge wastage,” Vearey said.

But opposition political parties don’t offer any concrete alternative to the NHI model.

The DA believes that the issues plaguing the country’s health system, such as corruption and mismanagement of funds, are “boundless and terrifying”, the party’s director of communications, Mabine Seabe, told Health-e News.

The party offers an alternative to NHI, called “Our Health Plan”, which the DA proposes will be funded “through the removal of the current tax subsidy for medical scheme contributions” and removing the means test for access to public hospital services.

According to the DA’s manifesto, “no South African will be left without medical care” — and it aims to have more than 50% of citizens covered by private healthcare by working with the private sector to “improve affordability of options for the lower and middle class”.

It also promises “a programme of revitalising public healthcare facilities” and the introduction of “a funding mechanism to provide for appropriate and accessible emergency medical services for all”.

The DA’s answer to the lack of healthcare workers is “remove racial quotas as they apply to access to medical school with the aim of increasing the cohort of doctors and nurses each year — while still ensuring diversity”.

Russel Rensburg, director of the Rural Health Advocacy Project, is wary about the DA’s proposal to remove the means test, which “is not consistently implemented at the moment, which makes it moot”.

“What the party is not saying is what it will replace the means test with,” says Rensburg. “It could mean the removal of the means test will see the introduction of a standard tariff, which is detrimental to health access for the poor.”

He adds that the DA’s opposition to the sugary drinks tax exposes its limited understanding of public health needs and the multi-faceted drivers of disease:

“Its abdication of responsibility ignores the structural drivers of ill health, such as poor housing and transport systems that leave little to no leisure time for poor healthcare users to exercise.”

The Economic Freedom Fighters’ (EFF) manifesto states its commitment to universal health coverage and increasing the life expectancy of all people in South Africa.

The party also makes bold commitments, such as ensuring that each district in South Africa has a 24-hour regional or tertiary hospital with “a minimum of 450 beds… with internal medicine, paediatrics, obstetrics, gynaecology and general surgeons by 2022.”

But it is not clear how any of its goals will be achieved or financed, and the EFF did not respond to Health-e’s numerous attempts for comment.

Rensburg describes the EFF’s plan as “well-intentioned” and points out that the focus on primary health “is in line the global movement towards universal healthcare”.

“However, its broader health strategy, which includes the production of generic medicines through a state-owned pharmaceutical entity is ambitious to say the least,” says Rensburg,

Access to healthcare is more than just physical access to a clinic or hospital, said Rensburg, and describes both the DA and EFF’s intentions to improve the ratio of people to clinics is outdated.

“What is required is to re-imagine healthcare to include health at all stages of life. For example, access to optometry services can radically transform the educational outcome and future earning potential of healthcare users. This requires a different approach which is premised on going to the patient instead of them coming to you,” he says.

“The top three political parties also ignore the institutional damage over the past decade and none of them have concrete plans or reform proposals to address the decline of the state’s capacity to dispense its mandate for all,” says Rensburg.

Meanwhile, the Inkatha Freedom Party (IFP) believes that a decentralised health system works best and provinces having more control over their health facilities would be better than the “one-size-fits-all approach” the NHI is proposing.

“The (health) department cannot micromanage from Pretoria. Health should be decentralised entirely, not partially, as is the case today,” the IFP’s media and communications head, Yaseen Carelse, told Health-e.

The African Christian Democratic Party (ACDP) doesn’t have much faith in the ANC-led government’s ability to manage government and the party would like to see the business expertise of the private sector involved in the implementation of the NHI.

Reducing infant mortality, preventing stunting and providing more “equality in healthcare” are at the top of the ACDP’s health to-do list. The party is anti-abortion and says the country’s Choice of Termination Act is “a license for promiscuity”. In the same breath, the party lists “women’s health” as its key area.

Leading up to the 8 May elections, the critical question political parties need to answer is: How will South Africa achieve healthcare that is inclusive of everyone — irrespective of nationality? This includes putting an end to the perpetual state of emergency of the public health system.

“We’re heading in a very dangerous moment in how, once again, non-nationals are being scapegoated for the poor performance of public healthcare systems in South Africa.” DM