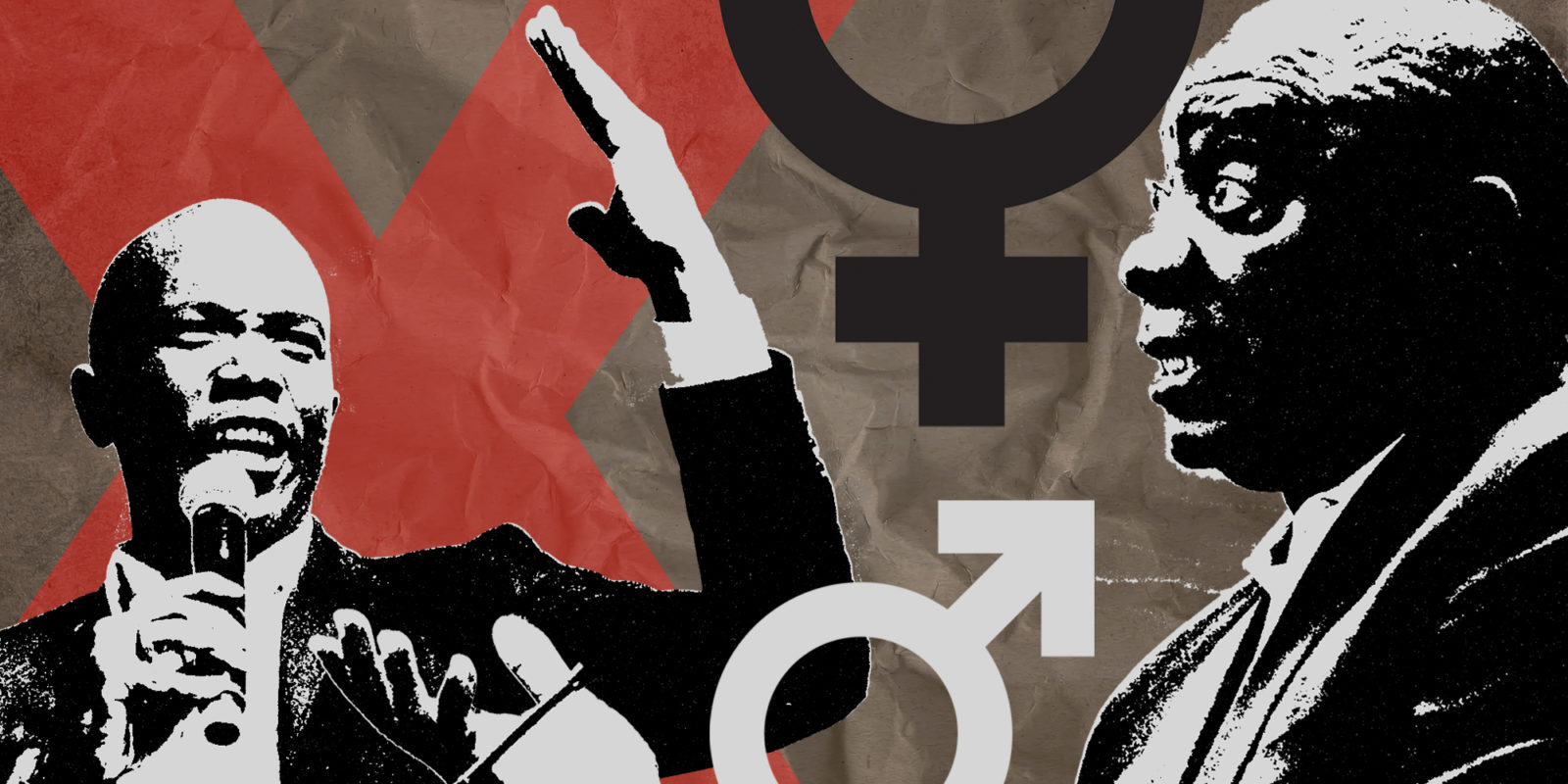 Meet Petronella Ing, a 46-year-old departmental manager of the Kwik-Spar in Linden, Johannesburg. She was born in Delarey in Randburg and grew up in surrounding communities. Ing is in charge of the bakery, home meal replacements and deli at the Spar.

“It is busy. It definitely keeps you on your toes but you can’t get bored,” Ing says of her work.

Ing will not be voting in the upcoming national election as she believes none of the political parties have anything to offer her and because “government and politicians are corrupt”. She didn’t even bother to register for the 8 May election.

Amina Deka Asma is an honours student who was born in Kenya in 1995. Her parents (both born in Burundi) fled to South Africa when she was less than a year old due to the political problems that Burundi was facing then. Upon arriving in South Africa, Asma received refugee status which afforded her the opportunity to study at Rhodes University, allowing her to fulfil her dream of becoming a journalist.

“I’ve always wanted to be an advocate of some type. So I realised since I am good with my words and I’m good at writing, journalism is what I should go for,” Asma said.

As a refugee, Asma is unable to vote, but she has taken a keen interest in politics and has engaged with several political parties manifestos, especially as far as gender-based violence is concerned.

“Just because I am not allowed to vote does not mean I am not clued up on everything that is going on… like the Zizi Kodwa case and the allegations made against him. There are conversations that need to be had about things like this,” she said.

Yet if Asma was given the opportunity to vote, she too would choose not to. Like Ing, she believes that not enough is being done by the ruling party and other political parties to ensure the safety of women.

“The first thing that they need to understand is that gender-based violence can happen anywhere. Not just at work, not just when you walking in the street at night, not just in the club but every single where,” Asma said.

A gender-based violence activist from #NotInMyName, Themba Masano, is registered to vote on 8 May. He believes that it is important to exercise your right to vote as well as being motivated by aspects like GBV to motivate your vote.

“It is very important to elect a party that can move our country forward. As an activist, I am definitely one who is looking at the gender-based violence sphere. I think it is important that we look at a party that highlights issues such as GBV,” Masano told Daily Maverick.

Vanessa Govender is another gender activist who is registered to vote in the 2019 election.

“There are few issues that play a critical role in my party of choice. GBV is one of those issues. But it is not the only deciding factor,” Govender told Daily Maverick.

On 28 February 2019, the commission held a briefing to discuss the outcome of CGE’s conference with political parties to discuss women’s participation and representation in the 2019 Election. Senior leaders were invited but according to the CGE, parties sent a representative who was not in leadership or in decision-making positions.

“(Invitations) went out to all national secretary general with the exclusion of DA. With the DA we wrote a letter to Mmusi Maimane himself. And to our disappointment they sent junior staff,” acting chairperson for CGE, Tamara Mathebula told Daily Maverick.

This, Mathebula said, was very worrisome as party leaders were unlikely to get detailed minutes of the meeting which included representations made by women in the leadership capacities raising issues around unequal remuneration, sexual harassment in the workplace, the rights of members of the LGBTQI community and gender-based violence.

Added to this, Mathebula believes that the three top parties – Democratic Alliance, African National Congress and the Economic Freedom Fighters – have made unrealistic promises in their manifestos.

“They are promising women things that can not be delivered,” Mathebula said.

All three political parties have committed themselves to eliminate gender-based violence and inequality.

The DA’s manifesto describes GBV as “incalculable”, the EFF states that women have suffered under the oppression of “sexism and patriarchy” for the last 20 years while the ANC simply labelled GBV a “crisis”.

In its 170-page manifesto, the EFF dedicated three pages to highlighting how it will empower women and eliminate GBV, stating that “it is black women who suffer the most from gender-based violence”.

Govender disputes this by pointing out that the EFF’s stance is both racist and a travesty for anyone to think that one woman’s life is worth more or less than another based on the colour of her skin.

“But we shouldn’t be surprised by this; after all, this is very much the EFF’s cheap political rhetoric and a ploy to divide and rule. Anyone or any party who is truly committed to the war against patriarchy and gender violence would never resort to something so utterly vile and contemptuous. It is painful and even traumatic to me as a survivor to hear someone say my life is worthless and not worth saving because my skin isn’t the right colour,” said Govender.

“Interventions will include education against patriarchy and sexism, complemented by legislation,” the EFF manifesto states.

It promises to work with the department of labour to monitor reports and enforce gender parity and equality in the workplace to implement a system to name and shame perpetrators.

“The EFF government will introduce a whistle-blowing mechanism for reporting all instances of sexual harassment, jobs-for-sex and gender-based violence in the workplace,” it read.

Asma said this was strategic. “I feel like they have taken a feel of what people, and women in particular want on the ground. You can just go on Twitter and see people’s outcry to this issue of GBV,” Asma said.

The DA’s manifesto says the party will look to prevent violence against women at source rather than relying on the criminal justice system. Three out of its 86 pages are dedicated to ensuring that the message of prevention and support is one that the South African people must hear.

“An empathetic and targeted response to gender-based violence can and will ensure women are free, independent and able to contribute more to their families and communities as they are no longer controlled and abused by intimate partners, family members or colleagues,” the DA manifesto reads.

Even though reliance on police is something the DA would want to reduce, the party states that it wants to ensure that better police systems, prosecutors, victim support and rehabilitation are in place to deal with the scourge of violence against women. It also promises to “implement an electronic tracking system for domestic violence complaints to enable the tracking of perpetrators”.

Masano is sceptical about this promise as the implementation plan was not put forward.

“This does not sound realistic or sustainable to me. What happens when someone is just a suspect? I think first and foremost we need to tackle our justice system because they have proven that they are incapable of handling GBV cases. They need to have special programmes and units for gender-based violence,” said Masano.

Mathebula said these were lofty ideals but if the DA ever got into power, they would be unable to achieve these targets. “They use these promises to attract women to vote,” Mathebula said.

Govender, however, applauds the idea but said it would be imperative to first get the basics right before the government spends “millions” on things like electronic tracking.

“This sounds great in theory I’m sure and it would be a nice to have that kind of thing. And I wouldn’t dismiss the idea of it… (but) let’s fix reporting of abuse, the treatment and justice of and for victims, let’s get that right and then look at implementing these sort of mechanisms that will strengthen an already strong structure,” said Govender.

Out its 68 pages, the ANC dedicated one page to addressing gender-based violence.

The party’s manifesto says it will call for stricter bail conditions and harsher sentences to combat violence against women and children.

Ing said she did not believe that the ruling party cared for women in general or those in its ranks.

“They don’t even do enough for women. And there is so much to be done to protect us as women,” said Ing.

Ing’s comment comes on the backdrop of revelations that the major political parties, except for the DA, do not have sexual harassment policies.

Asma said the ANC doesn’t address issues of GBV unless big cases like Zizi Kodwa and Pule Mabe come out.

“They only comment when they have a lot of issues. Otherwise, if it’s not trending they sit there silently doing nothing.”

Govender believes that the ANC has squandered several opportunities to deal with matters of gender violence.

“I think how the ANC deals with men within its own ranks who have been accused of sexual misconduct, gender violence is equally, if possibly not more, telling to their commitment to non-sexism and gender equality. For me actions speak louder than words,” said Govender.

“The ANC themselves don’t have policies put in place to protect the women that they have internally. Like with those two cases of the spokespeople in the ANC. They need to stop with policies and discussions and do more on the ground,” said Masano.

“They (politicians) can do a lot to protect women. They can put up shelters to protect women in GBV situations or homes for women who are running away from abusive husbands. Community centres can also be put up. They can also add more clinics for women that are private and safe. But they don’t,” said Ing.

“The government needs to get better policies put in place. We need to stop hearing cases of women being assaulted and raped and more on men being arrested,” Asma said.

Govender believes that the government needs to work on improving the judicial system so that more women can feel like something will and can be done when they report their cases of abuse.

“When impenetrable structures that are tough on action and gentle on victims are in place, then only will we see a shift in the statistics around this issue and certainly women and victims who are emboldened to actually seek help and justice,” said Govender. DM