Sonny Venkatrathnam (1935-2019): Robben Islander and Rebel Without a Pause 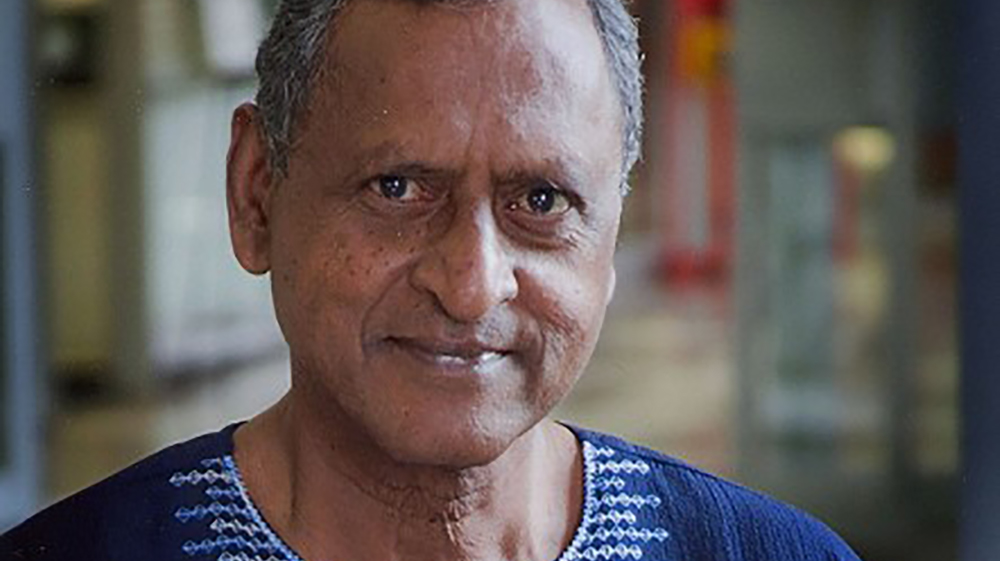 Sonny would not lick the brogues of power and pomp. He poured scorn on how people were using the state as a weapon of personal graft and Shakespearean plots for power.

‘If you ever go visiting in Cape Town/and look across that blue and silver bay/spare a thought for those who ploughed/the gray miles of water/salt and bitter as their tears/who stir in graves as restless as the surge/and wonder if they gave their lives in vain.’ – Dennis Brutus, 1996

In the early hours of Friday 15 March Sonny Venkatrathnam, aged 84, died. A man of incredible stature and learning, it is tragic that so many of you reading these words would never have heard of him, let alone met him. A freedom fighter, he was incarcerated on Robben Island in the 1970s.

I knew this man. From afar mostly. But then I got a chance to tell his story, published in a book entitled Reading Revolution: Shakespeare on Robben Island.

As the plot goes, Sonny received a copy of The Complete Works of Shakespeare on the Island, but it was quickly confiscated. He was shattered as he knew that Shakespeare would be a wonderful companion in the long years ahead on the Island. But then the atheist was saved by divine intervention:

“And one Sunday morning… a warder tells me, ‘The (Anglican) Church is here… I tell him I’m an Anglican you know, but I left my Bible in the storeroom… He takes out his keys; opens the storeroom; and I pick out my book: The Complete Works of Shakespeare. I take it out and show it to him. “Look here’s the Bible the William Shakespeare.” The problem is how do we hide it, it’s a bare room… So what I did was that, again, providentially, it was Diwali, and my parents sent me greeting cards. So I took those cards, cut them up and pasted them with porridge over the covers of the book. The warders would come and ask me “What’s that?”…And I said, “It’s my Bible”… they did not touch it.’”

On the Island, books were reflected upon, debated, and absorbed with zealousness and passion. It opened new ways of seeing, while allowing prisoners to escape the prison walls. Given the limited number of books available, many prisoners read the same books over and over again, often deriving new meanings. As Scholes reminds us, “we can read a book again, starting over as Plato believed souls might start over again in life… It is also true, as Heraclitus might have said, that the same person never reads the same person twice”.

Prisoners taught others the art of reading and writing, this “education” opening a whole new world. For the first time, many prisoners read and wrote their own letters, a vital means to “escape” to “home”. Breyten Breytenbach, himself a long-term political prisoner, put it beautifully: “as your letter opens/there is an unfolding of sky, or word from the outside of memory”.

In telling Venkatrathnam’s story I got to talk to many Robben Island prisoners. It must be said that some would not agree to talk to me because they had a strong antipathy to Sonny. You see, their years in power and the trappings that came with it stood in stark contrast to Sonny, who refused high office and directed an ice-pick at their somersaults and betrayals.

Still, the value of speaking to Robben Islanders is that it involved listening to people who live in two temporal zones. Behind bars, on the rough end of power, but driven by the ideal of a new South Africa. And then, abruptly, into the zone of an apartheid-free country.

As Susan Buck-Morss put it: “When biographically lived time crosses collective time — this historical conjuncture marks a generation born twice”. Paths diverged. Men who bravely stood against everything apartheid could throw at them genuflected to the new power wielders in scenes reminiscent of Caliban giving allegiance to a new master:

“How does your honour? Let me lick thy shoe.”

Sonny would not lick the brogues of power and pomp. He poured scorn on how people were using the state as a weapon of personal graft and Shakespearean plots for power. He pointed me to Macbeth with a wry smile:

Venkatrathnam lived in Durban for most of his life. He was very critical of the new South Africa that he had sacrificed so much to bring into being, telling the project Voices of Resistance in 2002:

“I am bitter, I don’t deny that… so many years of struggle seem to have gone down the drain… You can’t eat a vote; you can’t shelter under a vote… Freedom means the basic conditions of life need to be addressed.”

While there might have been bitterness, Venkatrathnam in conversations saw the most rewarding part of his life lecturing at the University of Durban-Westville through the 1990s. He was invigorated by young students who were reading Frantz Fanon and Edward Said and who were thinking deeply about the pitfalls of the national democratic revolution.

Venkatrathnam told me he was learning all the time and the students appreciated that the lecturer in front of them bore the scars of his beliefs on his body, but was unbowed. A student of his, Sipho Buthelezi, penned these words about Sonny:

The last time I saw Sonny alive he was sitting in his garden watching over his fabulous red roses. As I left I saw him through the rearview mirror, slightly hunched, slightly lost. Learesque.

I thought about Ernest Hemingway’s Old Man and the Sea. Santiago is the solitary fisherman battling the odds. It does not matter that Santiago has returned to shore with the bony residues of a fish gobbled on by sharks. During the 84-day odyssey (and Sonny died 84) he has grown as a person. Santiago refuses to give up both the skeleton of the fish and also his own sense of honour and dignity, and it is this journey that gives rise to the memorable line he speaks in the middle of the ocean and which can sum up Sonny’s motto:

“A man can be destroyed, but never defeated.”

In post-apartheid South Africa, when so many Robben Islanders were diminished, Sonny grew in stature.

On Sunday I joined the throngs at the Clare Estate Crematorium. Listening to the speeches, it dawned on me that it was hard to pay homage to a man whose ideals were turned to dust by the very people he spent so many years with, sharing the trenches of battle.

Still, the wonderful historian Carolyn Steedman reminds us that “Dust is the opposite thing to Waste… It is about circularity, the impossibility of things disappearing… Nothing can be destroyed”. She quotes the late 19th century French writer Jules Michelet:

“We will enter our career (the career of the citizen and the revolutionary)/When our elders are no more/We will find there their dust/And the trace of their virtues.” DM

Desai is Professor of Sociology at the University of Johannesburg and author of Reading Revolution: Shakespeare on Robben Island.