Eskom staff were given one hour and 22 minutes to pay R659-million to the Gupta-owned Tegeta Exploration to help them raise the exact short-fall on the purchase price for Optimum Coal Mine. The contract was produced so last-minute that the Eskom finance team were unable to get it all done by a 2pm deadline so they simply amended a purchase order for coal from Brakfontein, a different Gupta mine.

Snehal Nagar, an Eskom accountant in the primary energy division, told the State Capture Commission on Tuesday how the entire process of securing the pre-payment for the Guptas had seemingly been done to “fool” the system.

Nagar is testifying to the controversial pre-payment for coal and the equally questionable circumstances around which Eskom had issued an Absa bank guarantee to further aid their acquisition of Optimum.

This pre-payment contract, signed by former CFO, Anoj Singh and former head of generation, Matshela Koko, has been the subject of several investigations.

Nagar said they were instructed to make the urgent payment on 13 April 2016 – first when Maya Bhana-Naidoo, a manager in Singh’s office, called him around 10 or 11am that day and later, when she sent him a formal instruction at 12.38pm with some supporting documents to trigger the payment.

Nagar said that while a contract was in fact presented for prepayment, there was simply not enough time to execute the payment because the contract had not been loaded on to the Eskom system.

This is a lengthy process involving five layers of staff and a process that would have entailed the creation of a purchase request through to a contract number.

“There was no time to follow the process usually required,” Nagar said.

As a result, the finance team amended an existing purchase order attached to a Brakfontein contract to make the payment.

Then, once the full internal processes had been resolved, the Brakfontein purchase order was reversed.

Asked by Justice Raymond Zondo whether the use of the Brakfontein contract was normal or acceptable, Nagar said this was not the correct way of doing things.

He agreed that the staff had resorted to this measure to ensure that the payment was done as per the instruction.

Leading his evidence, the Commission’s senior advocate Phillip Mokoena asked him why there had been such extreme pressure or rush for the payment, and why it had to be done outside of the rules.

Said Nagar: “There was a contract approved by the Board Tender Committee. There was an instruction from the CFO’s office requesting payment before 2pm.” This he said, they considered as a request from one of the highest offices in Eskom.

“Yes, I accept, the incorrect process was followed to make the payment, but we did get approval for that.”

This, he said, was obtained from Bhana-Naidoo.

He said a payment control form, required to regularise the irregular payment to Tegeta, had been signed off by Bhana-Naidoo.

The payment was all done and dusted by the time Nagar returned to the office later that day.

In total, he said, Tegeta was paid R728-million as it included payment of two other invoices as had been requested by Bhana-Naidoo.

“This was an unusual payment, firstly because we don’t normally pay for coal upfront.”

Secondly, Nagar said, the timing – to have this contract and payment done and all the required processes – within two hours, that too was unusual.

In addition, Nagar said, a pre-payment creates an additional credit risk to Eskom in the event of non-delivery.

“Yes, it was covered by a cession of shares as a guarantee, but why would I want shares in a company that can’t pay?”

Nagar, questioned about why Eskom staff would have executed this transaction despite being aware that it was irregular, said: “Yes, it was certainly startling. But this was an instruction from the board.”

And defying orders at Eskom, said Nagar, is “ugly”.

Nagar also testified to how his team had arrived at an amount of R2.1-billion in penalties due by Optimum’s owners in 2015 and a revised figure of R1.17-billion (in view of an earlier deduction of R158-million among other things) in 2017.

These penalties for out-of-specification coal quality had accumulated since 2012 when the mine was owned by Glencore.

Despite this, an Eskom team negotiated a drastically reduced penalty of R500-million (an effective cash value of R254-million) once the mine was sold to the Gupta-owned Tegeta in terms of a settlement agreement signed by Singh, Koko and former head of legal, Suzanne Daniels.

Nagar told the commission that Daniels had emailed him to ask that he sign a memo in support of the settlement agreement.

As there was no indication of how Eskom had arrived at the reduced penalty, he said he was uncomfortable as the company was now willing to accept a lot less cash than he believed Eskom was entitled to.

He insisted on a clause to illustrate to the “approvers” of this deal that there was more benefit for Eskom to derive, although, he said, it did not make it into the final memo. 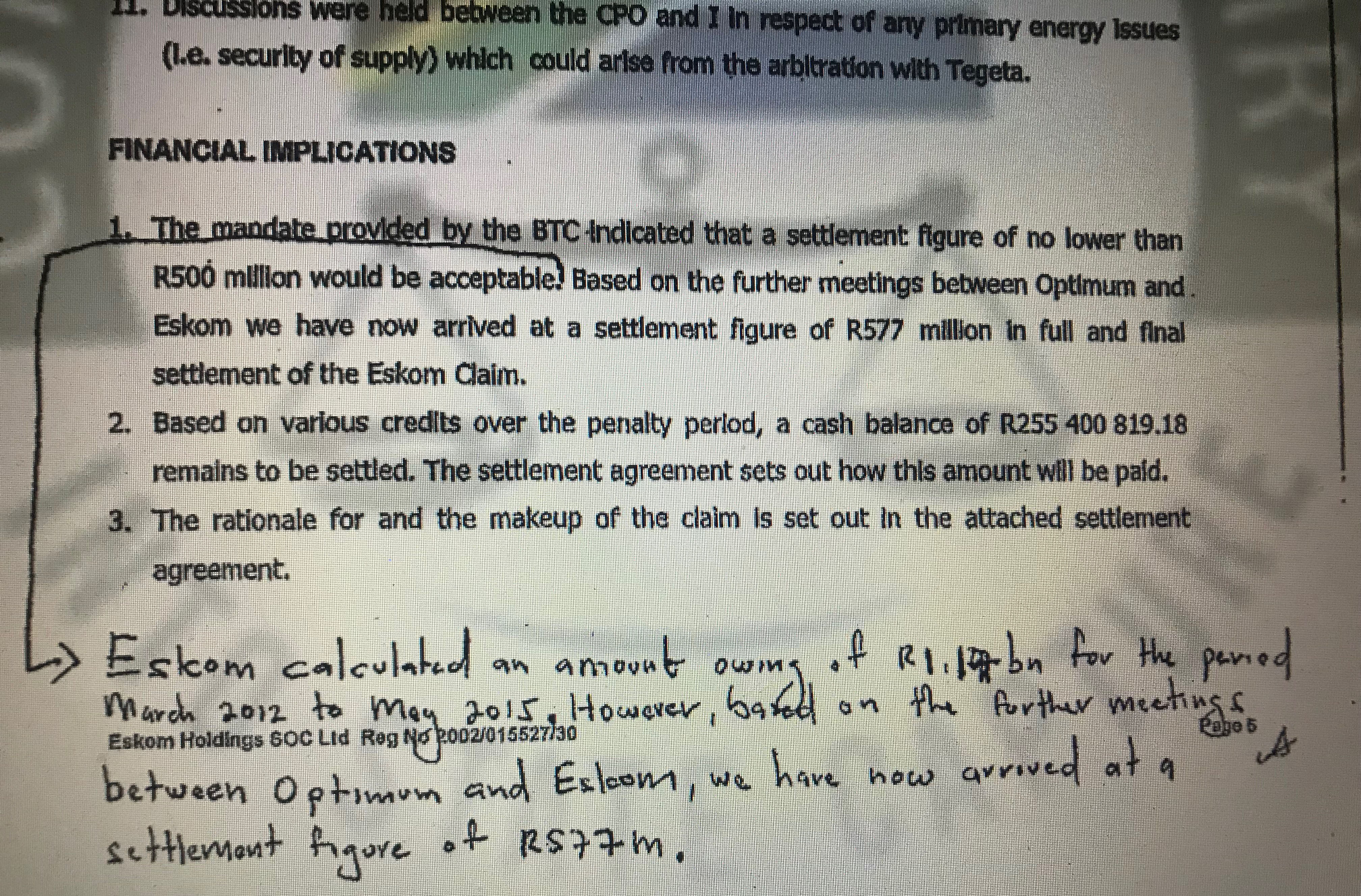 Asked by commission chairman, deputy chief justice Raymond Zondo, whether he had asked Daniels how Eskom could justify the R500-million when calculations by his team had put the penalties at over R2-billion, Nagar said he recalled having been provided with a few explanations.

One of those, he said, was that the initial bloated penalty “could sink Optimum”.

This was extremely ironic as it was Eskom’s insistence, just months earlier, that Glencore was pushed to cough up R2-billion in penalties, a development that drove the company into business rescue. This then paved the way for the sale of Optimum to the Guptas. DM

The Commission resumes on Friday with testimony by Eskom’s Gert Opperman, previously the contract manager for the Optimum coal supply agreement.

Robotics good news, but learners must first be able to read