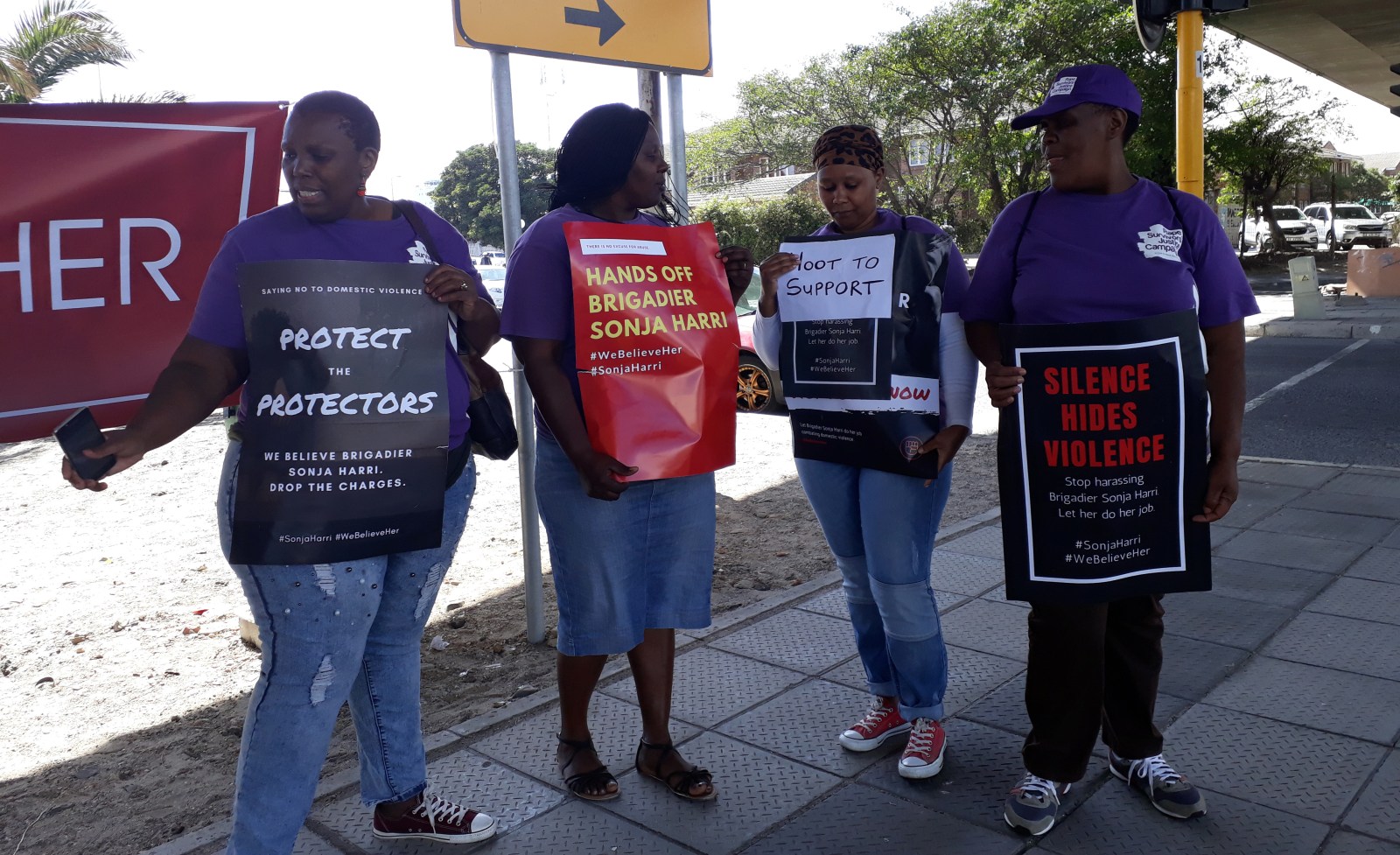 Rape Crisis Cape Town Trust members picketed in support of Brigadier Sonja Harri who was the Provincial Head of the Family Violence, Child Protection and Sexual Offences (FCS) unit, at the start of a disciplinary hearing on Thursday morning.

Rape Crisis demonstrated its support on Thursday for a top-ranking police officer in Cape Town who faces internal disciplinary action which the organisation claimed amounted to “victimisation”.

Brigadier Sonja Harri has been charged with failure to attend a meeting, failure to provide documentation for assessments and failure to amend her performance contract.

“Brigadier Harri, whose duty it is to protect victims of abuse and violence, is herself a victim at the hands of her own colleagues”, claims a statement from Rape Crisis Cape Town Trust.

A small group of protesters, waving placards declaring their support for Harri, gathered outside the Customs Building on Thursday morning.

Mandisa Mbotshelwa, an activist at Rape Crisis, says that they believe that the charges against Harri are “politically motivated”. She describes Harri as an “effective leader” who could always be counted on when other police members were unhelpful.

The Rape Crisis statement said: “We believe that these charges are a ruse … We have no confidence that Brigadier Harri will be afforded a fair disciplinary process due to those involved in bringing the charges choosing the prosecutor of the investigation team and the presiding officer.”

Harri’s former boss, Major-General Patrick Mbotho instituted charges against her in 2016 . Soon thereafter, Sonja Harri says she was victimised at work which resulted in her suffering a great deal of “psychological and emotional trauma”.

Harri was told on 25 September 2018 by Provincial Commissioner Kombinkosi Jula that charges of misconduct, instituted in December 2016 by Mbotho, would be “re-enrolled”.

She has been booked off from work since 2017 and she recently asked the Minister of Police, Bheki Cele, to intervene.

Harri has more than 30 years experience and has worked on several high-profile gender violence cases including the murder and rape of Anene Booysen in Bredasdorp in 2013.

The internal disciplinary proceedings were held behind closed doors. Proceedings ended early for reasons which were not immediately clear.

In response to previous queries from Daily Maverick about the Harri matter, Sergeant Noloyiso Rwexana of the SAPS Western Cape Media Office said that the issue “is between employer and employee” and that the SAPS “is not prepared to discuss this in the public domain”. DM