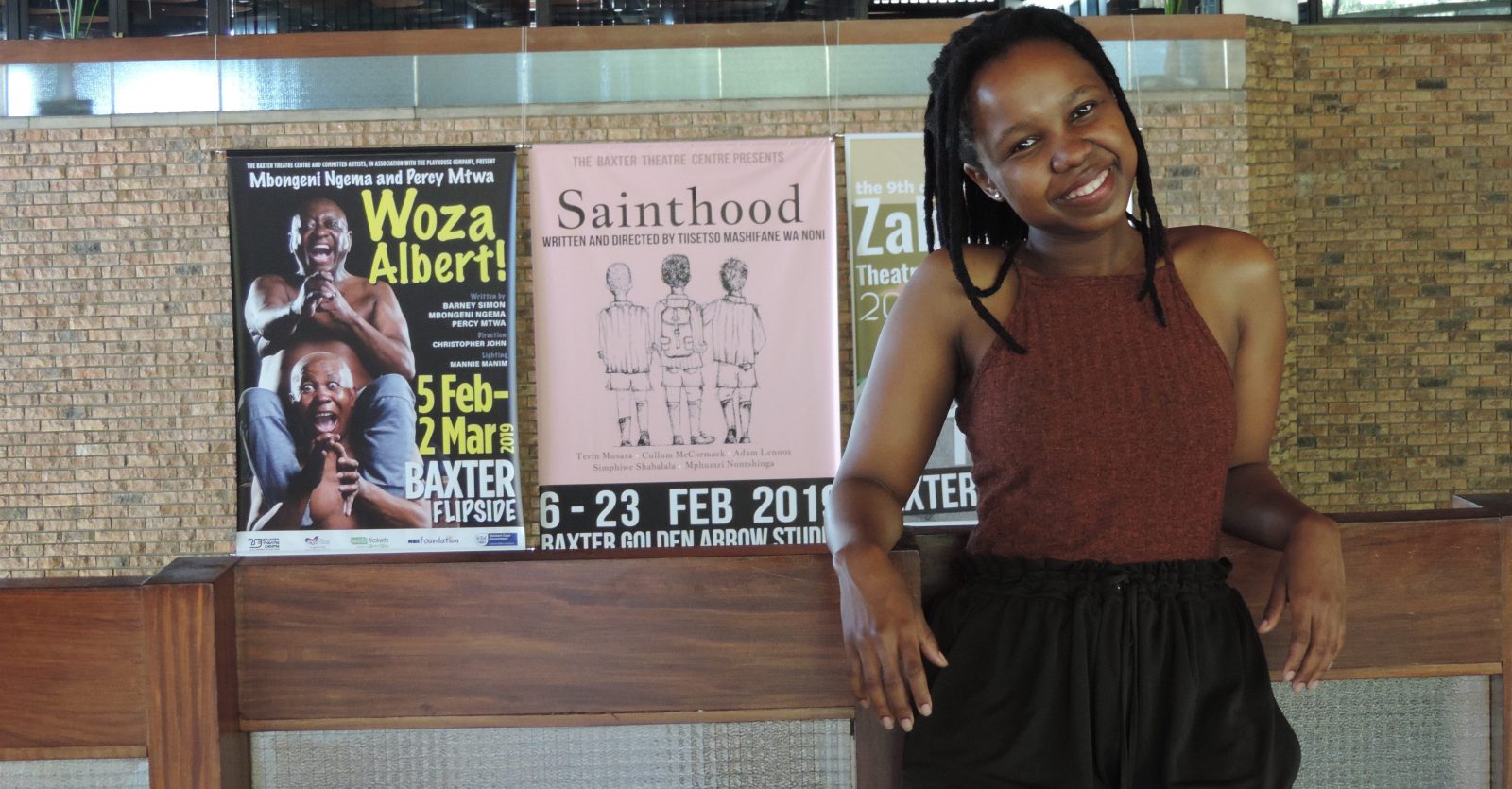 At 23 years old, Tiisetso Mashifane wa Noni is a playwright, director, actor and already has an award-winning play. Her debut play, Sainthood, tackles the toxic masculinity and culture at private all-boys schools. The early success came as a surprise for the recent university graduate, but it was the result of years of hard work.

This Saturday will mark the final performance of Sainthood at the Baxter Theatre in Cape Town. At its core, Sainthood is a story about young people trying to come to terms with their identities in a post-apartheid South Africa. By focusing in on the stories of five boys, the play manages to simplify a complex and nuanced subject.

Set in St Gabriel’s School for Boys, a fictional private all-boys school, the play aims to confront the culture around the “saints experience” of money, privilege and influence. Playwright and director Tiisetso Mashifane wa Noni, 23, is a “saints” girl herself and attended St Mary’s Diocesan School for Girls in Pretoria. Mashifane wa Noni recalls interacting with their brother school fairly often, but felt she lacked the emotional intelligence to deal with those encounters at the time.

“They were not pleasant interactions with boys in high school, they really weren’t,” said Mashifane wa Noni. “You’re in that environment where all these things are happening and you have an inkling that something is off but you don’t necessarily have the capacity to deal with it.”

It was only when she began studying at Rhodes University that Mashifane wa Noni felt like it became easier to have conversations with her male peers. The idea for Sainthood, Mashifane wa Noni’s debut play, came to her in 2015 when she was reading the book Rape: A South African Nightmare. She was completing the second year in her Bachelor of the Arts in Political Science, Philosophy and Dramatic Arts at the time.

While reading a chapter about a group of boys who assaulted a classmate outside a dormitory, Mashifane wa Noni felt the need to interrogate the scenario further. She wanted to better understand what was “fuelling the values and the traditions and the actions of boys of that age”.

After writing a short piece based around the idea for a school assignment, Mashifane wa Noni decided to table the idea. From there she invested her efforts into doing research, including reading books and newspaper articles on the subject matter and dozens of interviews with boys who had attended “saints” schools. This interview process continued for two years before being synthesised over the course of a month into the first draft of Sainthood.

It is snippets of these interviews that greet the audience as they file into the theatre, with various audio recordings summing up the themes of the play. These themes include masculinity, racism and sexuality. Although Sainthood has fictionalised these stories, hearing fragments of the full story from the boys who dealt with similar situations helps ground the play in reality.

Through this process, Mashifane wa Noni was able to create several layers within characters and avoid having them become stereotypes. This might be due to the fact that up until now, the play has been somewhat of a living text. Sainthood, as it appears now, is in its fifth rendition. With each version, the characters become more complex and gain an added depth, according to Mashifone wa Noni, who also credits the cast for their contributions in the process.

Despite initially being a very dark and violent piece, the play has since evolved in an unexpected direction. The balance between more humorous, light moments and the darker, serious points creates a striking contrast that continues through the play. The tonal shifts never cease to seem jarring and always come as a bit of surprise, with the audience frequently shifting from laughing to gasping mid-scene.

Aside from just defaulting to humour, Sainthood also creates a sense of intimacy between the characters. Particularly in the beginning scenes where the characters are constantly touching or hugging in the background.

Despite being aimed at teenagers in high school, Sainthood’s representation of these softer moments seems to resonate with older audiences. Several parents and grandparents have approached Mashifane wa Noni after the show to talk about how the play gave them a better understanding of what their children were experiencing.

The universality of the play is aided by the the lack of detail in all the props and costumes. There are no additional cast members aside from the main five characters, so that the audience can visualise their own headmaster in that place. The idea was to keep the set as neutral as possible so the audience can place their own experiences there.

“You’ll find that high school is generally the same,” said Mashifane wa Noni. “High school problems are the same whether you went to a same-sex school or a co-ed school. Either way it sucks and it’s difficult.”

Mashifane wa Noni has already begun working on her next play, which will feature an all-female cast. While finalising that, she continues to act and direct in various other projects and will also continue working on Sainthood as it does smaller shows around Cape Town this year.

“I think for me as a playwright this will be the final version of Sainthoood,” said Mashifane wa Noni. “It’s now a matter of letting the story get into the hands of someone else who will take the text and expand it for us. It’s time to let the play be what it is.”

Sainthood won the 2018 Standard Bank Ovation Award and received a Fleur du Cap nomination after it debuted at the National Arts Festival in Grahamstown. It then went on to become one the most profitable and well-attended shows during its run at the Theatre Arts Admin Collective before moving to its current spot at Baxter Theatre on 6 February.

Tickets for Sainthood, on at the Baxter Theatre until Saturday 23 February, are available for R100, with students receiving a 50% discount at the box office.