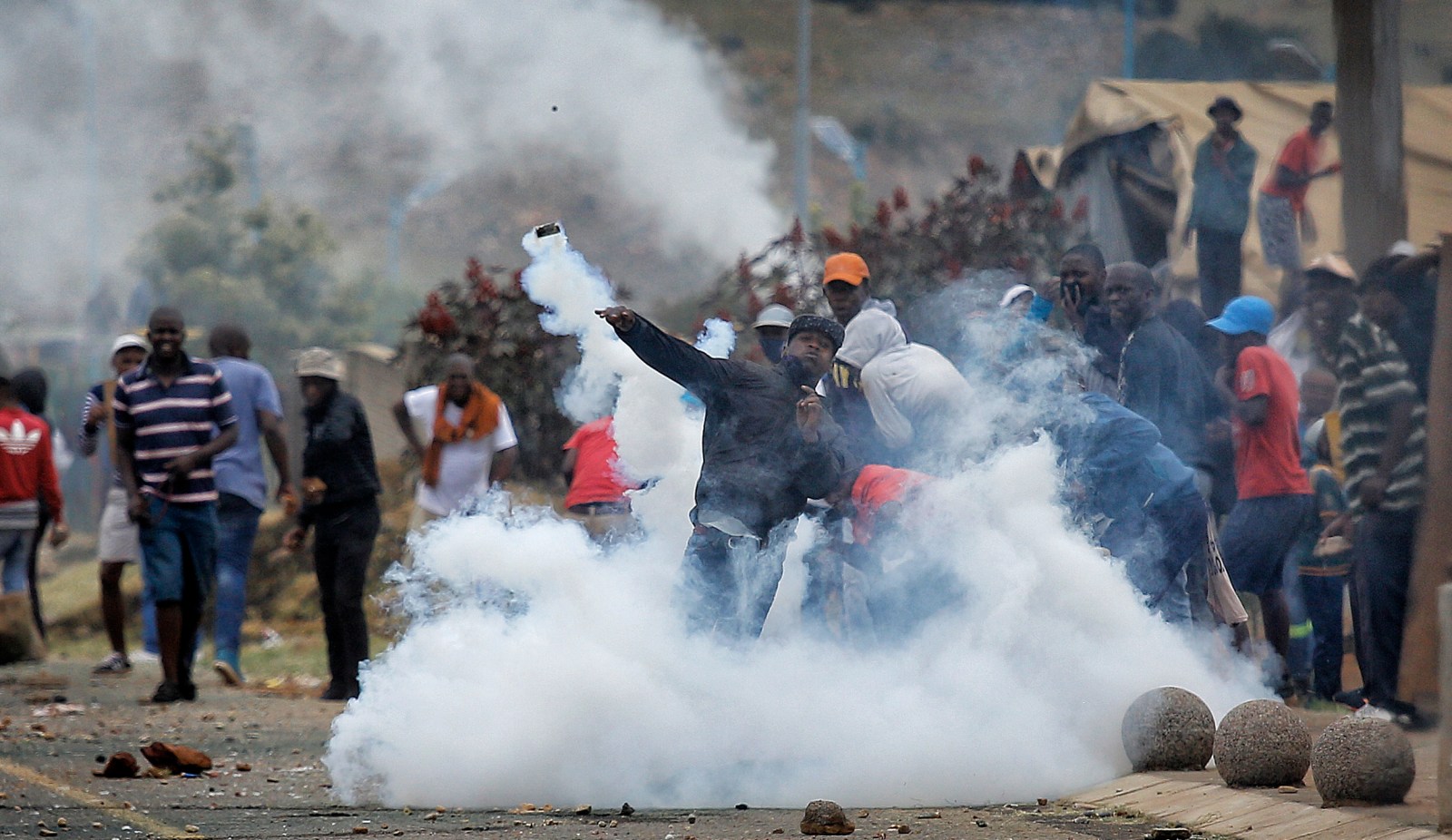 A protester throws a police tear gas canister back at police during fierce running battles after protesters took to the streets in Johannesburg, South Africa, 22 January 2018. EPA-EFE/KIM LUDBROOK

Providing equipment to control crowds non-lethally would help Zimbabwe avoid deaths of protesters like those recently killed with live ammunition, allegedly by the army.

South Africa is planning to supply Zimbabwe with non-lethal crowd control equipment to help it avoid deaths in dealing with protests like those which erupted in January.

International Relations and Co-operation Minister Lindiwe Sisulu said on Tuesday that this was one of the measures Pretoria was considering to help its neighbour manage its current political and economic crisis.

She said at a media briefing in Pretoria that non-lethal crowd control equipment would “lessen the spillover in dealing with unhappy people”.

Six Zimbabwean citizens were shot dead, apparently by soldiers, in protests in Harare which erupted in August 2018, directly after the controversial elections which were officially won by Zanu-PF. And human rights groups have estimated that about 10 people died in protests in January 2019, sparked by a 150% increase in fuel prices.

Sisulu told Daily Maverick in an interview on Tuesday that Zimbabwe’s problem was that because the police lacked the proper equipment to control crowds non-lethally, they were handing over the responsibility to the army which only had live ammunition for dealing with protests.

So supplying Zimbabwe with equipment such as water cannon and tear gas could save lives.

Sisulu was asked at the briefing if South Africa or the Southern African Development Community (SADC) had raised with Zimbabwe the allegations by many human rights activists that, apart from the shooting of protesters, Zimbabwe security forces had brutalised many more civilians during the January 2019 protests.

She replied that SADC leaders had asked Zimbabwean President Emmerson Mnangagwa to brief them when they met this month on the sidelines of the African Union summit in Addis Ababa.

They had asked him to explain what was happening in his country “and what we could do to help establish normalcy.”

Sisulu insisted in the Daily Maverick interview that SADC leaders had also quizzed Mnangagwa about the alleged human rights abuses. But she added that she was not at liberty to divulge the content of what was a confidential conversation.

Sisulu would also not elaborate on a financial rescue package for Zimbabwe which her government is negotiating with Zimbabwe, saying this was the responsibility of Finance Minister Tito Mboweni.

South Africa and SADC have also been criticised for too readily accepting the results of the December presidential elections in the Democratic Republic of Congo. Felix Tshisekedi was officially declared the winner but the Catholic church, which had deployed tens of thousands of election monitors to almost all polling stations, and others, believe that Martin Fayulu won by a landslide.

In her media briefing, Sisulu heavily stressed the peacefulness of the election rather than its democratic credibility. For instance, in her prepared statement, she congratulated the people of the DRC “for a peaceful transition of power”, adding in her remarks that this had been the first such in 59 years. She contrasted this with the 2011 election which she had observed as defence minister, which she said had been very violent.

Her statement did not congratulate the DRC for having conducted a democratic election. It only went as far as saying South Africa would “continue to work with them to deepen democracy…”.

Daily Maverick later asked her if this meant that SA and SADC had accepted the official election results for the sake of stability rather than because it had been truly democratic.

Senior officials in Sisulu’s department have privately conjectured that Tshisekedi’s election victory was engineered by the outgoing President Joseph Kabila to enable him to continue to govern from behind the scenes after he had been pressured to stand down.

This week it was reported that Tshisekedi and Kabila had met to discuss the formation of a coalition government. Kabila’s party secured a large majority in the parliamentary elections in December.

Sisulu rejected the interpretation that Kabila and Tshisekedi had stitched up the election together. She said Tshisekedi had asked South Africa to help him form a government and he would not have done that if he had already done a deal with Kabila.

Sisulu also threw significant light on two major foreign policy decisions which the ANC adopted at its conference in December 2017 and which have not yet been implemented.

The first was that South Africa should downgrade its embassy in Israel to a mere liaison office. The pro-Palestinian, anti-Israel activists in South Africa who agitated for this decision have reportedly become exasperated that Pretoria has still not implemented it.

Sisulu indicated that the decision would be implemented but – importantly – only after her government had found a way of doing so without disrupting economic and other ties with Israel.

She also said her government would not stand in the way of a bid by the Israeli company CBC to buy a R8.4-billion stake in South Africa’s Clover company. She stressed that there was “no ban on Israeli economic activity in South Africa”.

The anti-Israel lobby in South Africa has been actively agitating against the deal.

Sisulu also confirmed that the SA government was still reviewing the decision taken by the Zuma administration to withdraw from the International Criminal Court (ICC).

Sisulu said the decision may have looked right at the time but now “stood out like a sore thumb” in the light of the current administration’s priorities. She noted that SA had been at the forefront of establishing the ICC.

Sisulu also revealed that the government had received an official Mozambican government report – which she characterised as a “not-quite autopsy” – from Maputo on the death in custody in Mozambique in January of South African Andre Hanekom.

A professional hunter and fisherman living and operating in the country’s northernmost province, Cabo Delgado, he had been arrested in August 2018 by Mozambican authorities and later charged with complicity in a jihadist insurgency in the province.

He suddenly fell ill in prison in January 2019 and died within a few days in hospital. His widow Francis, a trained nurse, said she believed his symptoms indicated he had been poisoned.

Sisulu said it would be premature for Pretoria to release the official report on the cause of his death, as it was still waiting for guidance from Hanekom’s family on the right course of action. DM