2019 SONA, take 1: The stage is set for Ramaphosa’s crucial speech 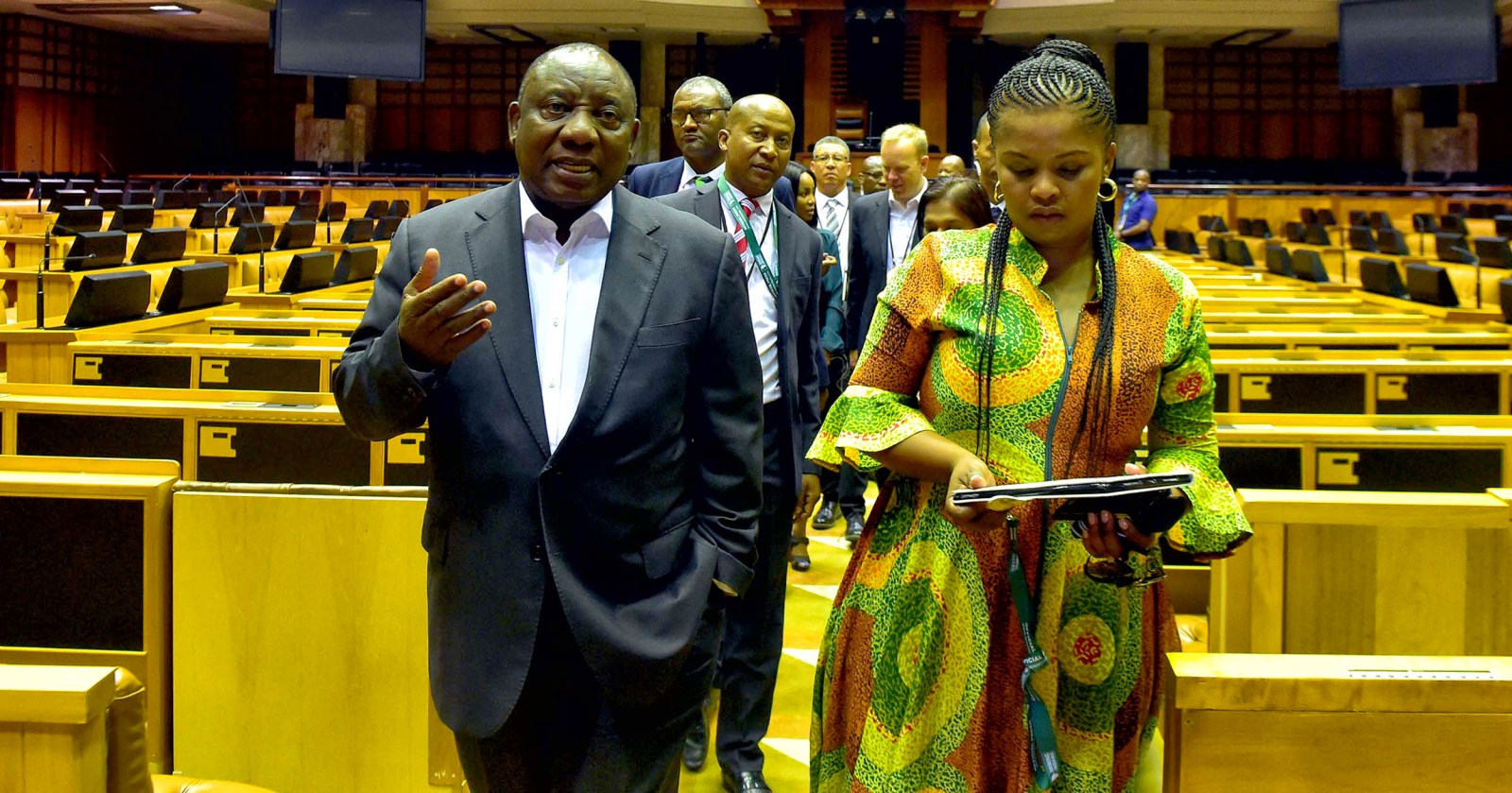 President Cyril Ramaphosa accompanied by his spokesperson Ms Khusela Diko checking the state of readiness around parliament ahead of his State of the Nartion Address in the National Assembly. 05/02/2019, Elmond Jiyane, GCIS

It has become more than obvious over the last few months that one of the most important political questions facing South Africa is about the political power of President Cyril Ramaphosa. On Thursday evening he will stand up to give his second State of the Nation Address as President. There will be many who will be hoping for big announcements around policy and, particularly, Eskom. But perhaps more important will be what the speech and the events tell us about Ramaphosa’s own take on his situation.

One of the big advantages President Cyril Ramaphosa will have on Thursday evening is the fact that he is not former president Jacob Zuma. It was Zuma who moved the State of the Nation Address (SONA) from Friday morning to Thursday evening, saying that he wanted the entire nation to watch the event on TV. But so poor were his speeches, and so devoid were they of content, that the main excitement sometimes came from Gareth Cliff’s SONA Twitter drinking game. In February 2013, when Oscar Pistorius killed Reeva Steenkamp, a major news television channel decided to stay with that story rather than take the speech live.

And, of course, Zuma broke conventions and laws by having VIP Protection agents on the floor of the chamber, and his Minister, David Mahlobo, jammed cellphone signals in the house in a night that ended with violence in the House. Zuma’s reaction from the podium to that violence, in 2015, was to laugh.

Ramaphosa has managed to maintain an air of dignified calm even in moments when he has been confronted by angry protesters outside the Union Buildings. It is likely that he will aim to maintain the same calm on Thursday evening. There is also an open goal in front of him: if he is able to restore decorum to the event, many voters will welcome that, and thus it could shore up his popularity.

In normal circumstances, in an election year, a big speech like this is an opportunity for a sitting President seeing the re-election of their party to promise all sorts of goodies. Usually, this would mean no tax increases, possibly a tax cut, while also attempting to visibly increase spending on popular programmes.

Unfortunately for Ramaphosa, this seems impossible under current circumstances. There simply isn’t enough money in government to fund any more spending. And it may be foolish in society as poor as ours to attempt to help the richer middle classes through a tax cut when millions of poor people are crying out for improved services from government. To add to his problems, it is unlikely that his Finance Minister Tito Mboweni would countenance any kind of unrealistic spending promises, which would rein in any such instincts.

Of course, perhaps the real issue is what the balance of power within the ANC does allow Ramaphosa to do? One of the most important political processes currently underway is the ANC’s list process, which will determine who will represent it in Parliament after the election. If this process goes against Ramaphosa, and people opposed to his agenda are able to dominate the National Assembly after the poll, this may be the most friendly caucus he ever faces. At the same time, it may be that his political power is still greater after the election, if he produces a strong majority for the ANC, and that list process goes his way.

However, to add to the complexity of the situation, Ramaphosa might feel that because of his own personal popularity, and the fact that an election is coming, it might be the right moment to announce certain reforms. These moves may well be opposed by some within the party but would be difficult for them to act during an election campaign without damaging the ANC itself. He may also use this opportunity to speak above the ANC and directly to voters. In other words, there could be a small sweet spot open for him to push through reform announcements.

Perhaps the most burning governance problem facing his government at the moment is Eskom. It is running out of cash, and, to keep the lights on, requires serious help. Cosatu says it will oppose any breaking up of Eskom, while other constituencies, such as the National Union of Metalworkers of SA (Numsa), want power prices to stay the same, and for the Independent Power Producers programme to be scrapped. And yet, were Ramaphosa to announce big changes to Eskom, it would be difficult to see how they could be acted against during the election campaign.

For many voters, it would simply be about actually seeing a plan being implemented with some light at the end of a particularly expensive tunnel.

Then there is the issue of corruption. On Wednesday morning it was announced that the Hawks had made several arrests emanating from the evidence given at the Zondo Commission around Bosasa. It is intriguing that the first arrests as a consequence of the Zondo Commission actually come for alleged corruption that appears to involve many groups within the ANC, rather than the Gupta-linked State Capture evidence, which implicated one group much more than the other. There will, of course, be some who may be cynical enough to believe that the arrests come at a good time for Ramaphosa, as he will be able to claim that those who engaged in corruption are being pursued.

For some voters, the lack of action involving criminal charges and real accountability for the acts of corruption displayed at the Commission is a very real issue. Ramaphosa’s ANC has to continue selling the “New Dawn” narrative to voters. They may be tired of words, will want to see real action, and Ramaphosa may finally be able to point to some of that real action.

One of the more interesting elements of the SONA is the possible behaviour of the major opposition parties. The ANC’s election of Ramaphosa to replace Zuma appears to have sparked major problems for the DA, which has spent much of 2018 fighting itself rather than the ANC. It may feel that a dignified silence for Ramaphosa’s speech may be the best option.

But for the EFF, life is even more complicated. Julius Malema used Zuma’s speeches to great effect, using SONA, the greatest possible stage for his politics of spectacle. He was able to force Zuma, and the ANC, to show that it would use violence against him on live TV. But Zuma was a relatively easy target, the Nkandla scandal, his refusal to answer questions, and his contempt for some democratic processes gave Malema much to work with.

Malema has previously promised that he will turn the SONA into a “question and answer” session on Bosasa’s donation to Ramaphosa’s ANC election campaign, if the President did not himself hold a press conference on the issue. EFF leaders have denied that doing so would amount to a “disruption” of the event. Of course, Ramaphosa was never going to give in to Malema’s demand. Now, the EFF leader has a difficult decision to make. If he does attempt to disrupt Ramaphosa’s speech in any way, many voters will feel that he is stopping the rehabilitation of Parliament’s image, and preventing the nation from moving on. But if he does nothing, having made such a promise, he could appear weak, unable to live up to his promises. That, in turn, could be fairly damaging for Malema.

Predicting Malema’s future behaviour is a risky business, but with this being an important election for him, he may feel that he has to prove that he is the leader for those who want to completely disrupt the current order of things.

Since the ANC’s Nasrec conference, our politics has often appeared to be a swirling mass of chaotic dynamics with little direction in what can be depicted as a set of small hurricanes, all moving a different way. Ramaphosa will have the biggest of political stages on Thursday night. If he is able to inject some direction, and show that he can actually make the wind blow his way, if he is able to show leadership, his speech could be a significant step in his process of power consolidation. DM

PS. Just as this analysis was being completed, the news broke of Supra Mahumapelo winning his bid to be reinstated as ANC North West chairman. Talk about a political bomb being thrown into the ANC’s wide tent, right in time for SONA and the general election…