Evicted from their home, farm worker’s family camps i...

Evicted from their home, farm worker’s family camps in an old clinic 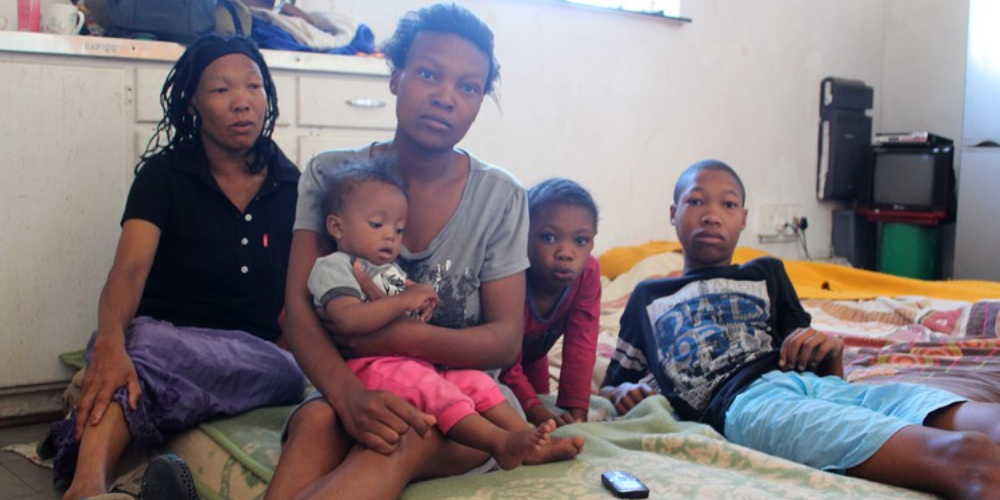 Sanna Syster and her family are camping out in an old clinic after being thrown out of their house on a nearby farm. Photo: Barbara Maregele

Sanna Syster lost her rights to her house when her husband died. By Barbara Maregele

Syster, her children and grandchildren were left homeless on 16 January after being evicted from their home on a wine farm near Rawsonville, about 100km from Cape Town. With nowhere to go, the family spent several nights on the front stoep of their house with all their belongings around them.

Syster’s husband, who had worked on Rustfontein Wine Farm for years, died late in 2017. Widows of farm workers have no tenure rights, and the court granted an eviction order against her. Syster, her 18-year-old son, 27-year-old daughter and granddaughters aged six and eight months are currently living in an old clinic building.

Syster said she had moved to Rawsonville as a young girl. “This place is all I’ve known. I never thought something like this would happen to me,” she said.

She said the Women on Farms Project had intervened before the Breede Valley Municipality could move the family to a settlement in De Doorns, some 45 kilometres away. Syster works twice a week in a kitchen near Worcester and her son, Noag Mafolo, attends Eureka Youth Centre, a special needs school in Rawsonville.

“We would rather stay in this clinic because the children can still travel to school from here. I don’t even know anyone that side.”

“My son enjoys his school here and there is no special school for him in De Doorns. I will be happy with anything as long as it’s here,” Syster said.

Her daughter, Roselene van Wyk, said the family had received court notices last year but had not fully understood the contents.

“On the day we had to go to court, we didn’t have money to travel to Worcester so we were shocked when people came in and started packing our things outside. We asked Women on Farms to explain the eviction order for us,” she said.

The sheriff of the court had locked them outside the house. “We slept on the stoep with all our things for the rest of that week. One night we were woken up because it started raining. All the mattresses and most of our clothes got wet but there was nothing we could do.” Van Wyk said her six-year-old daughter had just started Grade 1 at a nearby school.

“At least at the clinic we have running water and electricity. It’s safer for us. We don’t want to move to a place where there’s crime and skollies,” she said.

Johan Botha, spokesman for the Breede Valley Municipality, said there was no land available for formal or informal housing in Rawsonville. The old clinic building was used as an emergency halfway house for victims of evictions and flooding in the area, he said.

Botha said the municipality, in consultation with the Department of Human Settlements, had been looking for private land for housing. After meeting the Women on Farms Project, he said, municipal officials had agreed that “various government departments needed to collaborate to resolve the issue of evictions”.

There are currently 25,835 applications for housing in the municipality, and most of these families have been on the waiting list for more than 20 years. In a bid to address its overwhelming housing needs, the municipality was building more than 8,000 housing units outside Worcester, Botha said. The project is expected to be completed by 2022.

But Women on Farms is sceptical about the new development. Director Colette Solomon said new housing would not solve the problems of people like Syster, or those who worked on farms or in Rawsonville. “It’s far from Rawsonville. What will happen to people who need to commute for work?”

She said the new development would “become yet another community with high unemployment rates”.

Solomon believes government has missed opportunities to test cases of land expropriation without compensation. She said Syster’s house on Rustfontein Wine Farm was near the road and far from the vineyards and could easily be separated from the farm. “It is a neatly defined piece of land where the workers are living. It’s not going to affect the farming operations.

She said the Department of Rural Development and Land Reform – and the government in general – was “not thinking creatively about this”.

While municipalities have a role to play in these evictions, it is ultimately the courts which decide. In recent years the courts have been granting an increasing number of farm evictions in the region. Activists and the South African Human Rights Commission have called on President Cyril Ramaphosa to institute an urgent moratorium on all farm evictions, but this has not been done.

Carmen Louw, co-director of the Women on Farms Project, said the municipality had told the court that there was no land for alternative accommodation but the court had gone ahead and granted the eviction.

“If there’s no land, evictions have to be stopped until such time as land has been expropriated or becomes available,” she said. DM