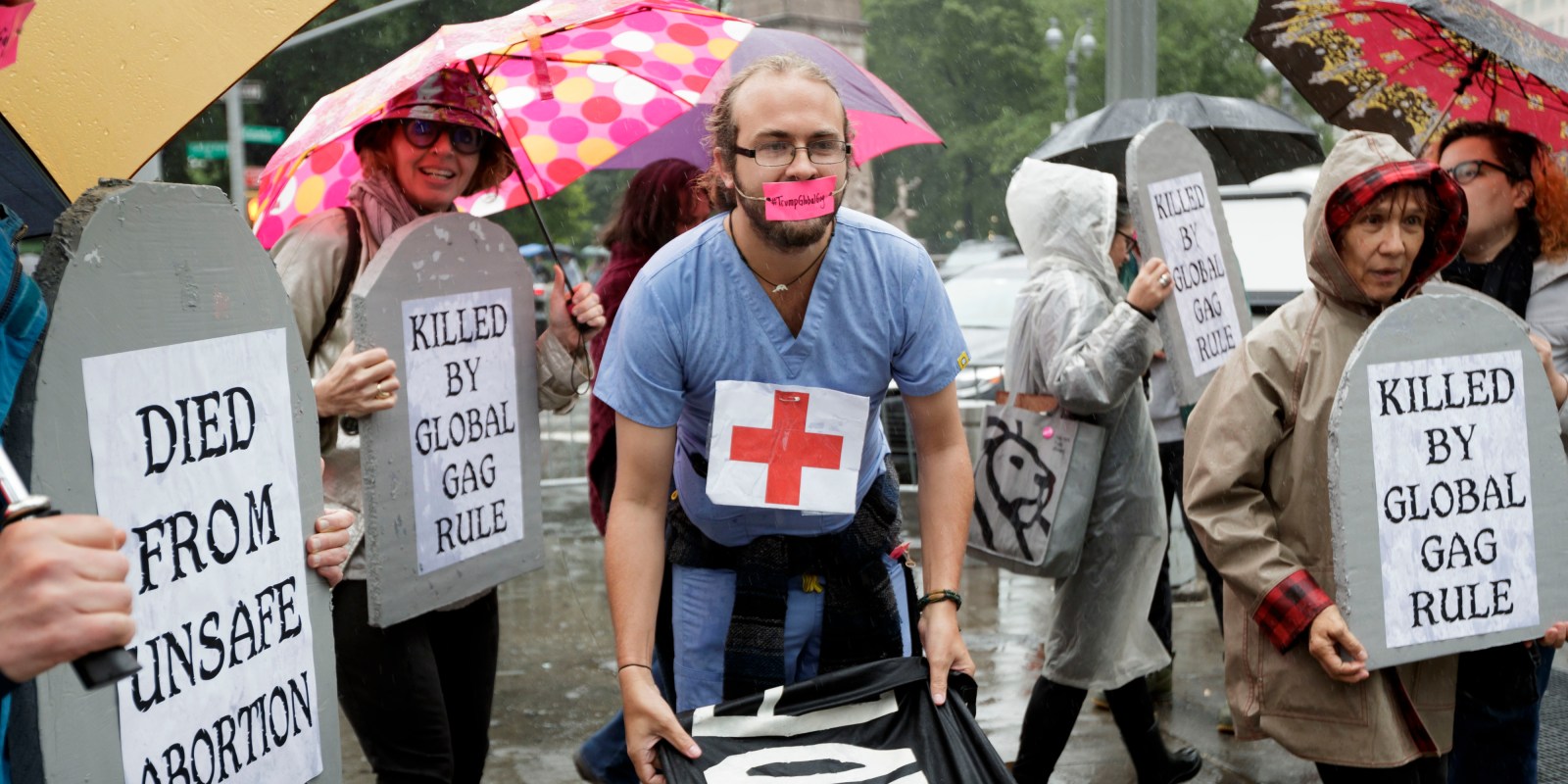 A group of demonstrators gather near the Trump International Hotel to protest the Trump Administration's 'global gag rule', an executive order that bans federal funds from being used for abortions at overseas facilities receiving foreign aid from the United States, in New York, New York, USA, 25 May 2017. EPA/JUSTIN LANE

Despite liberal abortion laws in many countries, anti-abortion US policy has forced NGOs worldwide dependent on US dollars to curtail their family planning, pregnancy services and information they provide to patients, according to a report given exclusively to HEALTH-E’s Pontsho Pilane.

About a third of the 247 HIV organisations surveyed across the globe report that they have altered how they operate and the services they provide because of the controversial United States policy that bans the institutions it funds from offering or promoting safe abortions.

These organisations are directly funded by the US global HIV programme, the President’s Emergency Plan for Aids Relief (PEPFAR), and make up 70 percent of the countries polled. According to its 2018 report, PEPFAR contributed R20-billion to South Africa’s HIV response in the 2017/18 financial year — making it the country’s second-largest funder.

US President Donald Trump reintroduced the Mexico City Policy, popularly known as the Global Gag Rule, when he assumed office in January 2017. The policy allows the US government to withdraw its funding from organisations if they perform or advocate for abortions in any way outside of the country, regardless of whether US funding is used for this or not. This includes referring women to abortion service providers or funding organisations that provide these services. For the first time, the Gag Rule has been expanded to money allocated for PEPFAR.

According to research conducted by international HIV research and policy organisation, the Foundation for Aids Research (amfAR) that Health-e News has seen, about a third of the changes that NGOs have made are not directly related to abortion. Researchers conducted an online survey among 286 organisations that received US funding between April 2016 and March 2018 and 12 one-on-one interviews were conducted with employees of organisations that currently and formerly funded by the US. Most of the affected countries are in Sub-Saharan Africa where the majority of PEPFAR funding is allocated and includes South Africa, Kenya, Eswatini and Mozambique.

But amfAR Policy Associate Jennifer Sherwood says the figures in the study should be taken as minimum impact because only organisations directly funded by the US-government were surveyed. Some organisations are likely to be funding smaller NGOs that were not included in the survey.

Non-abortion services that have decreased include HIV services such as HIV testing, cervical cancer screening and adolescent health. This decrease could the collapsing of services at one-stop health facilities, declining patient numbers and misinterpretation or over-implementation of the policy.

About 80% of the surveyed organisations were aware that the Gag Rule was added to their grant agreements at the time of the survey. But just over half of these organisations say they received training from the US government on this.

“Organisations may be over-implementing the Mexico City Policy because of a lack of nuanced understanding,” says Sherwood. “The policy is intentionally opaque and there’s a case of broken telephone between funders and organisations which makes it hard for NGOs to understand the extent of the policy and what their rights and obligations are.”

This is important in South Africa given the country’s liberal abortion laws, argues Sherwood. The Gag Rule stipulates that US-funded organisations can only provide abortions in cases of rape, incest or if the pregnant woman’s life is in danger. But a clause in the policy allows South African NGOs to counsel and refer patients to abortion services because abortion is legal in this country for any reason up until the 12th week of pregnancy. Women who are 13 to 20 weeks pregnant can get an abortion under limited circumstances. This loophole allows health workers to tell a person where they can get an abortion under the conditions that: they’re already pregnant; clearly state their decision to have a safe abortion and asks where they can get a one. Invoking this “affirmative defense” is not a violation of the Gag Rule, but “it’s pretty narrow in its protection”, she says.

Sherwood explains: “It only addresses counselling and referrals for legal abortion services from doctors and nurses, and doesn’t address the need for continued advocacy and access to abortion.”

NGOs too dependent on US funding

But the policy’s impact goes beyond abortion laws. The study also found that almost a third of surveyed organisations say 90% of their budgets came from US global health funding.

“Given that the policy has been expanded to include HIV funding, which is this huge pot of money, the choices organisations may be making this year are to lose funding or comply. The risks for these NGOs are so much greater now given that the majority of their funding comes from the US government,” says Sherwood.

This is especially concerning in countries with high HIV rates such as South Africa and Mozambique, the study states.

In July, US health research NGO Kaiser Family Foundation estimated that the funding of close to 1 000 US-based and foreign HIV NGOs is likely to be impacted by the Gag Rule.

People who are more at risk of acquiring HIV such as girls, young women and men who have sex with men will be more affected by the policy, the study predicts.

Participants interviewed in the study highlighted how young pregnant women are particularly affected because they need accurate reproductive health information the most.

“When they [adolescent girls and young women] are pregnant, they still want to go to school, and they say, ‘Should I get an abortion?’ and we are in limbo, we don’t know what to tell them. When they come to you, they need to be counselled, they need to know their options. The girls say ‘Abortion, what is that?’ and you can’t say,” another employee of a South African organisation that is currently funded by the US told researchers. None of the case studies Health-e spoke to agreed to be identified as they are all terrified of jeopardising their funding.

According to South Africa’s latest HIV household survey, girls and women between the ages of 15 and 24 make up a third of new HIV infections in the country. The provision of safe abortion is one of the targets listed in the country’s National Strategic Plan for HIV, Tuberculosis and Sexually Transmitted Infections.

The Gag Rule has also made it difficult for NGOs to collaborate and has created divisions among civil society organisations that opted out of US funding and continued to promote abortions and those that agreed to stop.

“There is immense fear from other organisations to continue working with you, it is almost like you have something contagious,” a former US funding recipient in eSwatini told researchers.

Sherwood says: “This research disproves the myth that the Gag Rule doesn’t affect PEPFAR-funded organisations because they primarily work in countries with highly restrictive abortion laws. There’s a really broad reach of the policy-making impacts in countries regardless of their abortion legalities. There is an actual suppression of accurate health information and a decrease in advocating for sexual reproductive rights.” DM