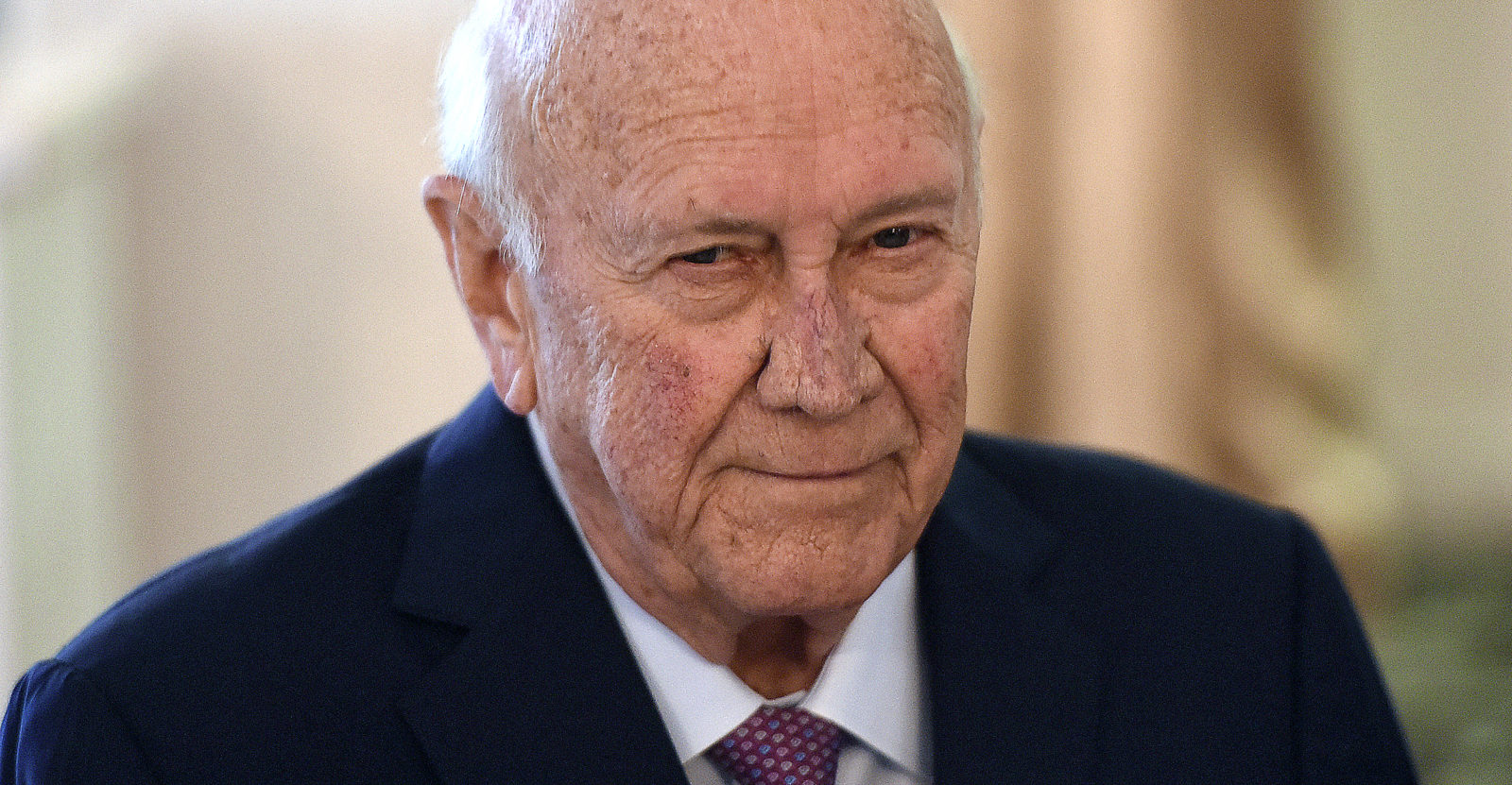 FW de Klerk, the last apartheid president who went on to serve as a deputy president in the first democratic government, on Wednesday described inequality as democratic South Africa’s biggest failure, closely followed by failure to promote non-racialism. ‘It is a matter of the deepest regret that, in my opinion, South Africa can no longer be regarded as a non-racial society,’ he said, adding concern about ‘aggressive racial rhetoric’.

There is a certain incongruity in an apartheid president talking of equality and non-racialism. But in many ways, FW de Klerk does not see himself as the last of the apartheid presidents from 1989 to 1994, but as the politician, even statesman, who played a fundamental role in South Africa’s transition to constitutional democracy, regardless of what critics say.

In a rare public appearance – he addressed the Cape Town Press Club – he apologised for his at times faltering voice: “I’ve been quite ill. My voice is not used to carry on and on…”

De Klerk on Wednesday tackled criticism from both black and white and also Afrikaner South Africans to stake his legacy but also reflected on 25 years of democratic South Africa.

“Let me make it clear to critics of our transformation process that, had we had not taken the actions we initiated in February 1990, we would have continued the 1985 road to a catastrophic racial war, to the destruction of our economy and a very bleak future for all our people,” he said, adding later:

On 2 February 1990 De Klerk announced in Parliament the release of Nelson Mandela from jail after 27 years, the unbanning of all liberation movements and the Communist Party and negotiations for a transition. The reference to 1985 relates to De Klerk’s predecessor PW Botha’s infamous Rubicon speech that had been expected to make radical policy shifts, including Mandela’s release, but instead took South Africa into a series of states of emergency as hardliners moved to dominate Botha’s Cabinet.

“It was my privilege to rise in Parliament to make the announcement that would change South Africa forever.”

And with that statement, De Klerk claimed his place in South Africa’s history, on the right side of history as part of the democratic transformation.

The inauguration of Mandela on 10 May 1994 was one of “the most fulfilling days in my life even though it meant the end of my presidency”, said De Klerk.

“I believe I was handing power not to Nelson Mandela and the ANC, but to a new constitutional dispensation that would protect the reasonable rights of all South Africans…”

But for many South Africans De Klerk remains inextricably tied to the apartheid regime and, in the years of negotiating the transition, the third force fomented political violence that saw train commuters thrown off moving carriages and killings not only in the volatile KwaZulu-Natal, but also killings like the June 1992 Boipatong massacre that saw De Klerk chased from the area and the ANC temporarily suspending participation in the negotiations.

Some of the unsettled and contested views on De Klerk emerged in 2015 when Cape Town renamed a major thoroughfare after him.

Much of De Klerk’s just over the 30-minute address to the Cape Town Press Club was about that “historic achievement” of South Africa’s transition, although he acknowledged that it came on the back of a series of crises.

“Scenes of chaos and mayhem were being broadcast nightly on international television and eroded what confidence that was still existing the government to maintain control… Following the refusal of international banks to roll over our short-term loans, we were facing bankruptcy.”

But following negotiations, the 1996 Constitution was the lynchpin in South Africa’s democratic future, according to De Klerk, despite what he called a “chequered success” in implementing its values.

“We have failed dismally to achieve equality. South Africa is a more unequal society in 2019 than it was in 1994 and to our shame is now the most unequal country in the world. Inequality has also grown within all our communities. Levels of inequality within the black community are almost as high as they are in the country as a whole.”

And South Africa has failed in non-racialism. De Klerk did not pull punches. South Africa was again becoming “a society in which the prospects of individuals are once again increasingly determined by the colour of their skin rather than the content of their character”.

“Our government has virtually abandoned the great tradition of promoting racial reconciliation that was exemplified by Nelson Mandela. Instead it now consistently pumps out negative stereotypes of specifically white South Africans, whom it labels with the original sin, whom in some statements it evidently does not regard as a part of ‘our people’, whom it says are not the rightful owners of the land to which they hold legal title, whom it blames for all the continuing problems of the country and to whom it refers to as colonialists, as aliens who do not really belong in South Africa.

“It is extremely dangerous when governments and political leaders in multicultural societies begin to propagate such stereotypes, particularly when such propagators often believe them with incandescent fervour.”

There was “a disturbing escalation of aggressive racial rhetoric punctuated by ugly incidents”, said De Klerk.

“There is no balance in the manner in which racist remarks and incidents are judged. Foolish and unacceptable racist remarks… not intended for public dissemination are treated far more harshly than incendiary remarks made in public by political leaders openly calling for racial violence.”

It was imperative to end South Africa’s slide into “new forms or racism”, said De Klerk, arguing that it was crucial for President Cyril Ramaphosa to return to the example of Mandela’s promotion of non-racialism.

De Klerk got a standing ovation from the lily-white Cape Town Press Club audience whose average age fell on the wrong side of 55.

Maybe the audience had wanted to hear more and harsher criticism of today’s South Africa and ANC government: one question from the floor was on whether firearms licensing was aimed at disarming white people, while another asked whether expropriation of compensation was not just about land but the seizure of all property.

But De Klerk did not deliver on such fearmongering expectations. He emphasised how much was going right in South Africa, where the judiciary is independent, political discourse robust and open, and a multiparty democracy holds successful elections whose results are accepted.

Bad was balanced with the good: formal equality for women although gender violence remained a deep concern; respect for human rights although some, such as language, are lagging as “English is fast becoming the sole de facto language of the country…”

And so his answers supported firearms licensing systems, even if awkward, as a system like the “liberal” US regime led to mass shootings. Although De Klerk and his foundation oppose amending Section 25 of the Constitution to allow for the expropriation of land because that was already possible in the Constitution, there was no reason to believe land expropriation would occur outside the rule of law.

“I’m encouraged by President Ramaphosa definitely withstanding radical pressure… He must come good on his promise. I think he will.”

The 82-year-old De Klerk may have one eye on entrenching his legacy in democratic South Africa, but despite illness, he has remained a politician’s politician with clear views on current affairs, like the Zondo Commission of Inquiry into State Capture.

“The key test will be the degree to which the truths now being exposed at the Zondo commission, and others, will have consequences…,” he said.

“The fact that we have institutions that can fearlessly expose corruption in the highest echelons of government is in itself a cause for confidence in the future.”

The Ramaphosa presidency also held confidence for the future, particularly if he can “stamp his authority on the ANC” whose internal factional struggles were almost more important than the upcoming elections.

“If President Ramaphosa wins, and is able to succeed with his efforts to restore the integrity of government institution, I am reasonably confident of the future.”

The ANC will win the 2019 elections, according to De Klerk’s self-described gut feeling, with the qualifier that this may be up for revision by March. The ANC would get less than in previous elections to come in at 56% or 57%, while the EFF would grow somewhat “if it succeeded to register young people, who are angry”.

The DA had “a tremendous challenge” to overcome its recent mistakes in handling “some issues” and internal fighting, but was expected “to more or less hold what they have”.

Given that his New National Party successor, Marthinus van Schalkwyk, first led the NNP into the DA, and then in 2004 merged into the ANC after a constitutional amendment to facilitate floor-crossing, De Klerk has had to find another political home.

“In a healthy democracy you need a strong opposition and I’ll be voting for an opposition party of my choice,” he said, in a clear reference to the DA, without naming it.

However, for De Klerk it was not just about current affairs, but also about legacy.