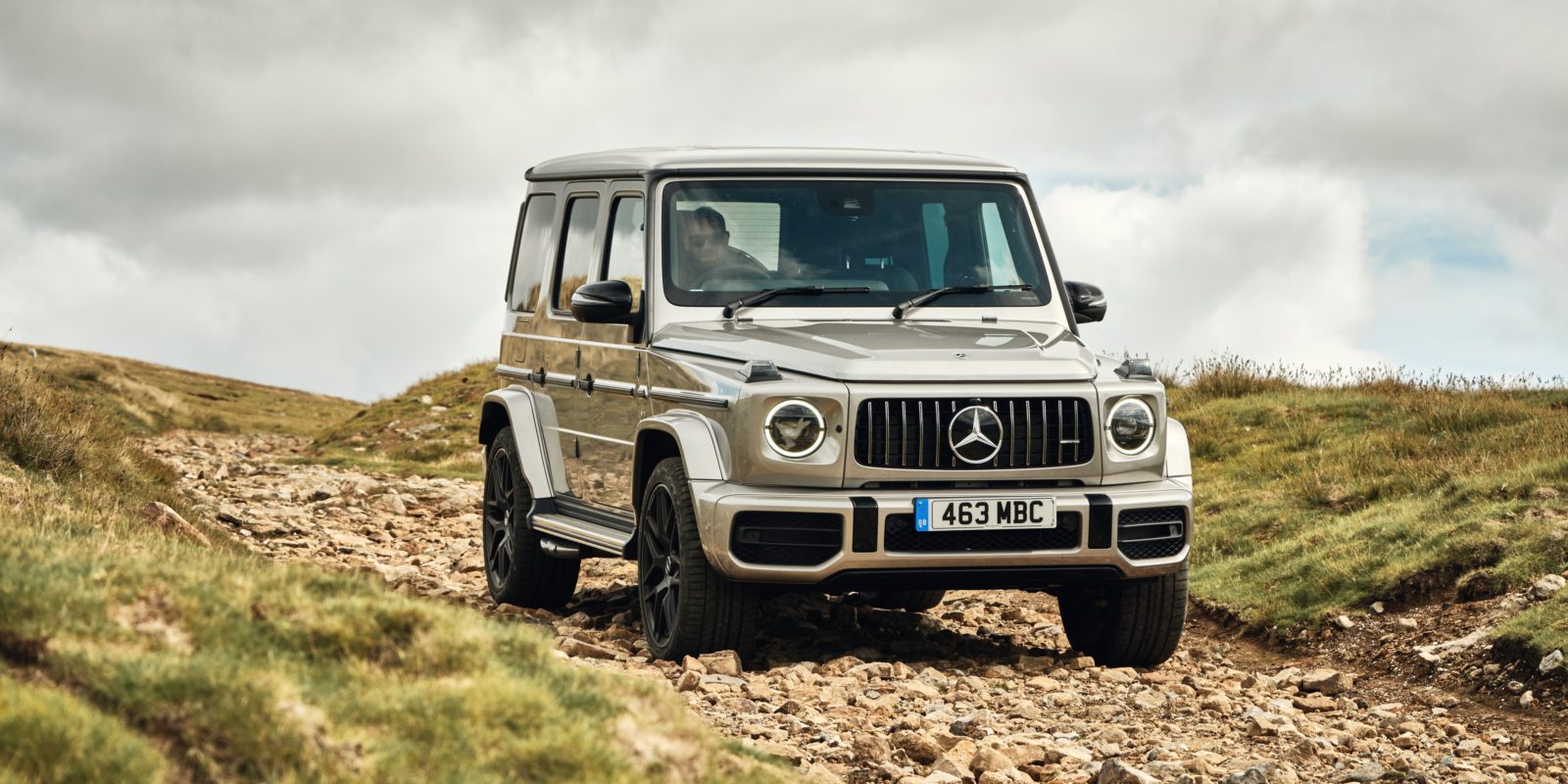 Flamboyant anachronism, or engineering marvel? The new Mercedes-AMG G63 is both, while also flaunting a proud and capable off-road heritage, and offering true performance talent. But would you want to drive it every day?

You hear the Mercedes-AMG G63 long before you see it. It emits a wild, deep, guttural roar that rattles windows, sets off car alarms and causes general mayhem.

When the big machine finally veers into view, it’s everything that the preceding soundtrack predicted: almost impossibly square, unashamedly utilitarian, bold and brash. Like a bodybuilder flexing, it flaunts its muscle with a swagger that is as in-your-face as it is intimidating.

No wonder you can forget about remaining incognito when piloting the big Merc: wherever you go, wherever you park, it turns heads, gathers crowds and invites selfies with all the magnetism of a celebrity.

And in some ways, that’s exactly what the G63 is. At the very least, it’s a phenomenon, with its roots planted firmly in the heritage of off-roading legend, an execution reflecting state-of-the-art technology, and a spread of capability that allows it to tackle sticky mud and racetrack tar with equal élan.

To Mercedes-Benz’s credit, it hasn’t tried to prettify the latest G-Class. Although it’s new from the ground up, the boxy, quasi-military shape is not that much different from its predecessor. In fact, those squared-off lines can be traced back to the original, 460-Series G-Wagen of the late 1970s.

It’s a design based on practicality rather than aesthetics, exuding a certain pragmatic honesty that is refreshing. But let’s not fool ourselves: the G63 may retain some of the G-Wagen’s exterior cues, but it’s light years removed from its ancestor.

Indeed, the sheer notion of a vehicle with thoroughbred performance credentials riding on a ladder-frame chassis, relying on a solid rear axle, and equipped with three diff locks and low range, seems incongruous at best.

That the result is as seamlessly convincing as it is, at least dynamically, represents a major engineering feat. But how relevant the G63 is in real-world motoring terms, is a completely matter.

First of all, let’s distinguish between the G-Class and the G63. Both use the same underpinnings, but the Mercedes-Benz G-Class remains a blue-blooded, if luxurious, off-roader first and foremost.

It comes with sensible levels of power and grunty torque, and enough 4×4 talent and engineering to conquer the deepest, darkest heart of any continent – including Africa.

The Mercedes-AMG G63, however, is performance specialist division AMG’s take on the G-Class formula.

It’s still a real 4×4, thanks to those diff locks and the low range transfer case. But the G63’s real purpose is to tear up tar in the best AMG tradition. It’s a sports car in off-road disguise.

For now, the G63 is the only G-Class variant on offer in South Africa, which is a little odd, given the scope for off-road exploration the subcontinent has to offer. I can only surmise that one or more non-AMG G-Class models will fill follow later.

The G63 comes in two flavours: standard, and Edition One. The latter gets more kit, including 22-inch wheels, and lots of crimson detailing inside and out – all for around R300,000 more than the standard model.

The G63 takes aim at well-heeled motorists looking for something fast and flashy, with a healthy dose of SUV-style, high-off-the-ground attitude, family-style space and practicality, and lashings of luxury – all rolled into one vehicle.

There will always be exceptions, but I very much doubt that your typical G63 driver has any interest in exploring the very real 4×4 capabilities of the vehicle. And to be fair, there’s enough to entertain and to impress without ever heading off the beaten track.

It all starts with that sound – and the engine that makes the music. Hand-assembled by a single technician in the best AMG tradition, the twin-turbo, 4.0-litre V8 has been tweaked and fettled to produce 430kW of muscle and 850Nm of torque.

The gearbox is a nine-speed dual-clutch design, optimised for rapid cog swaps, and ideally operated via shift paddles behind the steering wheel – although it’s quite competent to look after gear changes on its own.

As mentioned, all the serious 4×4 hardware has been retained, including the front, centre and rear diff locks, and a low-range reduction gear for conquering impossibly steep inclines, or tip-toeing threw rock-strewn landscapes.

Admittedly, with ultra-wide, soft-rubber performance tyres wrapped around 22-inch alloy rims, even the G63 will struggle in the really rough stuff. However, it will still eat the steepest dunes for breakfast, thanks to the combination of traction, momentum and clearance on offer.

We’re not only talking 270mm of ground clearance but also impressive approach and departure angles: despite a broad front bumper with massive air intakes, the blunt nose of the G63 still manages to limit the approach angle to 30.9 degrees.

The huge, upright grille features vertical, chromed strakes, and is framed on either side by large, round LED headlights – another example of retro styling matched to the latest tech.

Exposed door hinges, prominent door handles, a side-opening tailgate with the spare wheel attached, and twin exhausts that rudely jut out from each side, just ahead of the rear wheels, create further visual interest.

That same juxtaposition of functional practicality, irreverent execution and advanced tech is evident in the cabin, with generous lashings of lavish luxury added to the mix.

You sit high and mighty, ensconced in form-fitting bucket seats decked out in hand-quilted leather. The dashboard is an almost vertical slab, shoehorned in below the almost upright windscreen, while the thick-rimmed steering wheel adds to the sports car flavour.

If you select the optional digital widescreen cockpit (as most buyers are likely to do), conventional dials are replaced by a virtual instrument display and a second screen for the infotainment system, both seamlessly located behind a single sheet of glass.

The switchgear will be familiar to drivers of current-generation Mercedes models, including the centrally located controller for the infotainment system, the door panel mounted seat adjusters, and the console-mounted drive mode selector.

Those who experienced the previous G-Class will notice just how much roomier the cabin of the new model is, with gains in every dimension. Yes, you’re still perched quite upright, even in those contoured bucket seats, but long-distance comfort is no longer an issue.

As one would expect of any vehicle wearing an AMG badge, it’s the way the G63 goes that matters most, though. And yes, it does go!

It’s hard to get your mind around the fact that the 2.5ton Mercedes SUV can be shoved past 100km/h in 4.5sec, accompanied by a symphony of raw power. The acceleration is neck-wrenching in the first three gears, thanks to the 4×4 system’s unyielding traction.

The G63 gathers speed so effortlessly that you need to keep a constant watch on the speedo, especially around town. The raised stance tends to underplay the big Merc’s sheer velocity even more – until you realise how quickly you haul in slower traffic.

The steering offers a lot more finesse than previously, even if there is not enough feel and a tad too much assistance at commuting pace. Turn up the wick on some open country roads, though, and there are welcome precision and decent feedback.

Perceived body roll is quite marked, despite a much stiffer body and the AMG-developed adaptive suspension, and you can get fairly busy behind the wheel on curvy routes and over undulating terrain.

But it’s an entertaining busy, aided not only by the enhanced steering but by the sheer grip on offer. There’s nothing remote about the driving experience: the G63 is engaging, challenging and even thrilling when conditions allow.

Ride quality is remarkable, given the big SUV’s weight, and the speeds and loads it generates. Yes, it feels taut, especially in Sport and Sport+ mode, but even then, the emphasis is on composure, with enough polish to prevent progress from becoming jarring.

To be honest, I didn’t have the heart nor the courage to tackle anything off-road in the G63. It certainly has the pedigree and the kit, but those tar-focussed tyres just look too fragile to be subjected to anything more challenging than smoothly graded gravel.

I also have to admit that the G63 is immense fun to drive – much more so than I expected. There’s an inherent, loud and proud irreverence to the big Mercedes-AMG, to the way it blasts away from standstill with almost gravity-defying alacrity, that becomes addictive.

This latest version reflects significant gains in terms of refinement, interior space, tech and luxury. And for the few that are interested, it promises continent-crossing 4×4 capability, too.

However, for similar money, you could buy a Mercedes-AMG S63L, which is faster, much more refined and spacious, even more luxurious – and arguably more focused.

It won’t attract as much attention, though – and I’m sure that G63 buyers enjoy the vehicle’s crowd-pulling appeal. Indeed, the G63’s impudent character puts it in a class of its own.

It makes perhaps its closest real rival, the Range Rover Sport SVR, seem positively pedestrian, while sports car-inspired SUVs such as Porsche’s Cayenne Turbo, or even the upcoming Lamborghini Urus super-SUV, have none of the G63’s pukka off-road heritage.

In fact, there really is nothing else like it – and that’s exactly what makes the Mercedes-AMG G63 so special, and so timeless. Does it make day-to-day driving sense? No – but then, nothing with a price tag approaching R3-million really does. DM

The Air Force One of the motoring world. Supremely capable on and off-road, with sports car performance to boot – plus a healthy dose of irreverence.