It was another year, another ANC fundraiser – this time it was Instagrammable, though 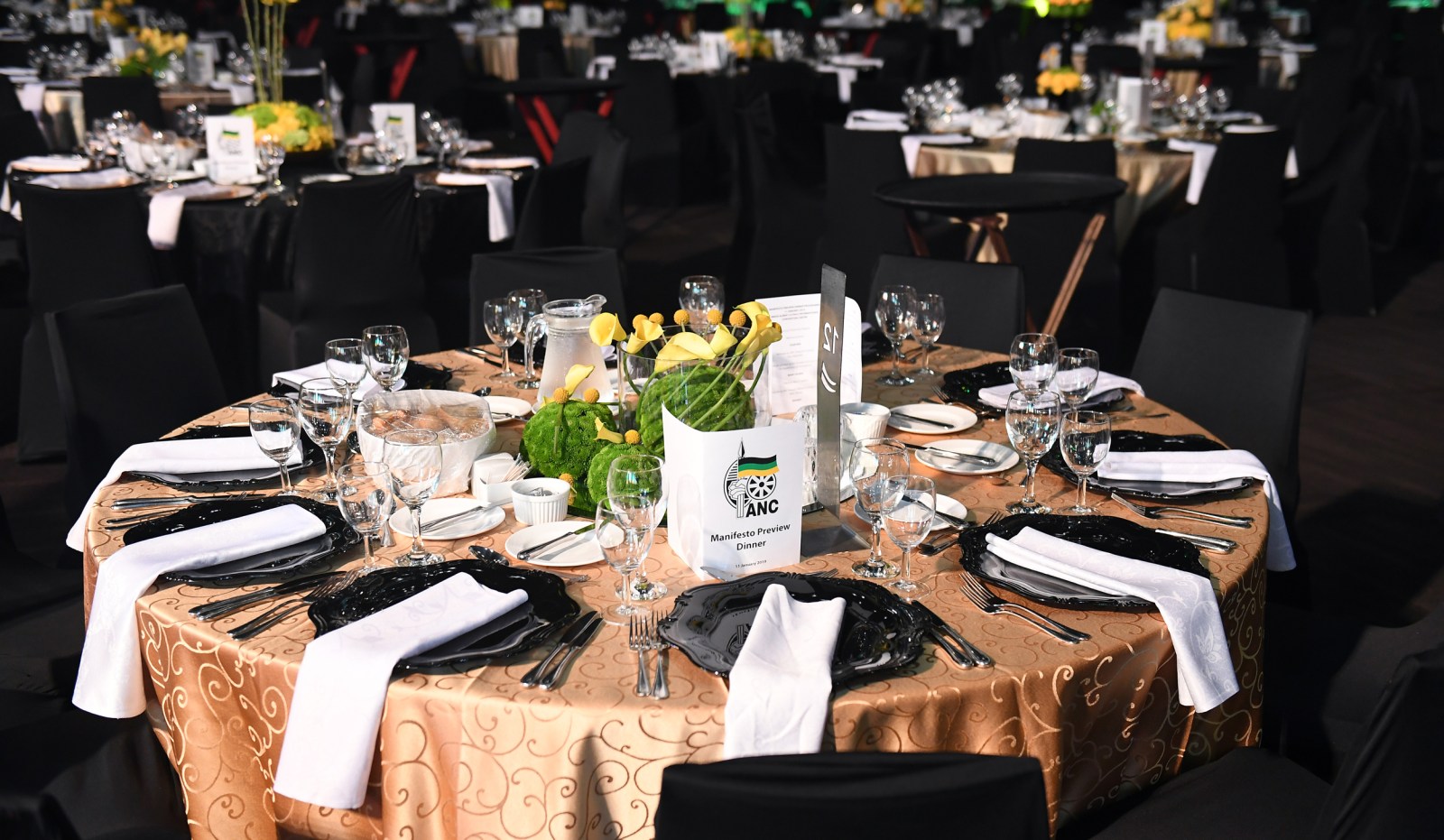 In the ANC there is a New Dawn of rhetoric about fighting corruption, but there is still the shadowy practice of selling access to the party’s leaders – most of them in government – to raise funds. There’s a difference in style, but much of the substance of the ANC’s annual January 8th gala dinner remains the same.

Dozens of dressed-up guests were made to listen to President Cyril Ramaphosa’s speech in the spacious Nkosi Albert Luthuli Hall at Durban’s International Convention Centre on Friday night while standing by the doors. They were late and would have disturbed those who were already seated, tucking into their starters of a duo of chicken terrine and smoked chicken breast, served with sautéed carrot florets, pickled broccoli and avocado mousse. Paying guests – there were 2,000, an organiser said – forked out upwards of R5,000 to be there, so they would have wanted it classy. Those with a bit more money could share a table with Deputy President David Mabuza for R500,000 or negotiate a price to dine with the president.

Despite the New Dawn and promises to crack down on shady practices, the ANC continues to make money off charging for access to government leaders. The party’s not, however, breaking any laws. Businessman Patrice Motsepe was at one of the two main tables, as always, while MultiChoice CEO Imtiaz Patel and Eskom board chairperson Jabu Mabuza were seated near Ramaphosa. A few years ago, it would have been Brian Dames.

The usual contingent of Chinese business people were there, too (the party’s Progressive Business Forum places a lot of emphasis on BRICS, with the C of this bloc especially active in the ANC), and some local funders, such as Vivian Reddy, who was known to have been one of Zuma’s benefactors in the past. It’s not clear whether Robert Gumede attended the dinner, but the fleet of ANC-branded Ford Rangers he donated to the party in Mpumalanga for campaigns were definitely in Durban.

The party will need all the fundraising it can get in this general elections year, as its access to cash in the Johannesburg and Tshwane metros in Gauteng has been limited – that happens when you lose these cities to the opposition. More openness in party funding could be on the cards, something which is supported by the ANC. Public funds would not look good on the party’s account.

Ramaphosa has instilled a new sense of discipline and control in the party, based on respect rather than fear. By around 21:00, most formalities – including the launch of some catchy and well-choreographed election tunes – were done, and the lamb main course (spinach lasagne for vegetarians) was served. Drinks too. The bar was closed for the entire duration of the almost hour-long speech. Zuma was also more or less on time this year, although he still breached protocol by arriving after Ramaphosa. The guests, however, voted with their feet, and it was clear from the two-deep queue of several metres long at Ramaphosa’s table that he was the man in charge now. In contrast, Zuma, seated at a table slightly back from the main tables, actually had time to enjoy the music without much disturbance.

In 2018, Zuma also made a late grand entrance to the party’s birthday gala dinner in East London, flanked by Uhuru Kenyatta. It was unusual to invite a president – and especially the Kenyan one, with whom the ANC didn’t have the best of relations – to attend the party’s birthday festivities. Zuma and Kenyatta had the look of naughty schoolboys who had lost track of time by smoking illicitly around the corner.

The last time leaders from the rest of Africa came to the ANC’s gala dinner was at the party’s centenary celebration dinner in 2012. Festivities continued until the record time of 03:00 after leaders ran over their time allocation for speeches. Even Zuma struggled to stay awake the next day as he addressed the party’s birthday rally.

Ramaphosa’s discipline also applies to his speeches. A former businessman himself, he wasn’t quite as crude as Zuma in asking for money. Master of ceremonies Fikile Mbalula said earlier in the evening that the gala dinner wasn’t merely a fundraiser, but also a preview of the manifesto, and Ramaphosa’s speech lived up to that. It also contained an element of the poetic, in the form of the Sankofa, the mythical bird symbol of the Akan people of Ghana “that constantly twists its beak behind itself to bring forth an egg from its back”.

“The Sankofa urges us to reach back in time and seek knowledge from the ways of the past,” Ramaphosa said.

For a second it was almost possible to forgive the party all its past sins, some of the least of which has been its auctioning of rare copies of the Freedom Charter and party-branded leather jackets to the highest bidder, and Zuma’s exhortations to business people to “invest in the ANC” because the party enabled business. This is the stuff kickbacks are made of.

Diplomats – at least those from Western countries – were not invited to the gala dinner this year, but they were replaced by a new category of people, “social influencers”. This term is meant to refer to glamorous people with an Instagram account. They even had their own accreditation booth. Perhaps they were tasked with serving Kool-Aid to the reluctant young voters where the charm of Collen “Oros” Maine, ANC Youth League leader, was failing.

Just before he stepped down as party president in Nasrec, Zuma regaled guests with tales of his upcoming tell-all book that would “explain a lot of things”, presumably on the smallanyana skeletons of those in the ANC. It would have made for some interesting fireworks if he were to demand a platform at next year’s dinner to do so. DM