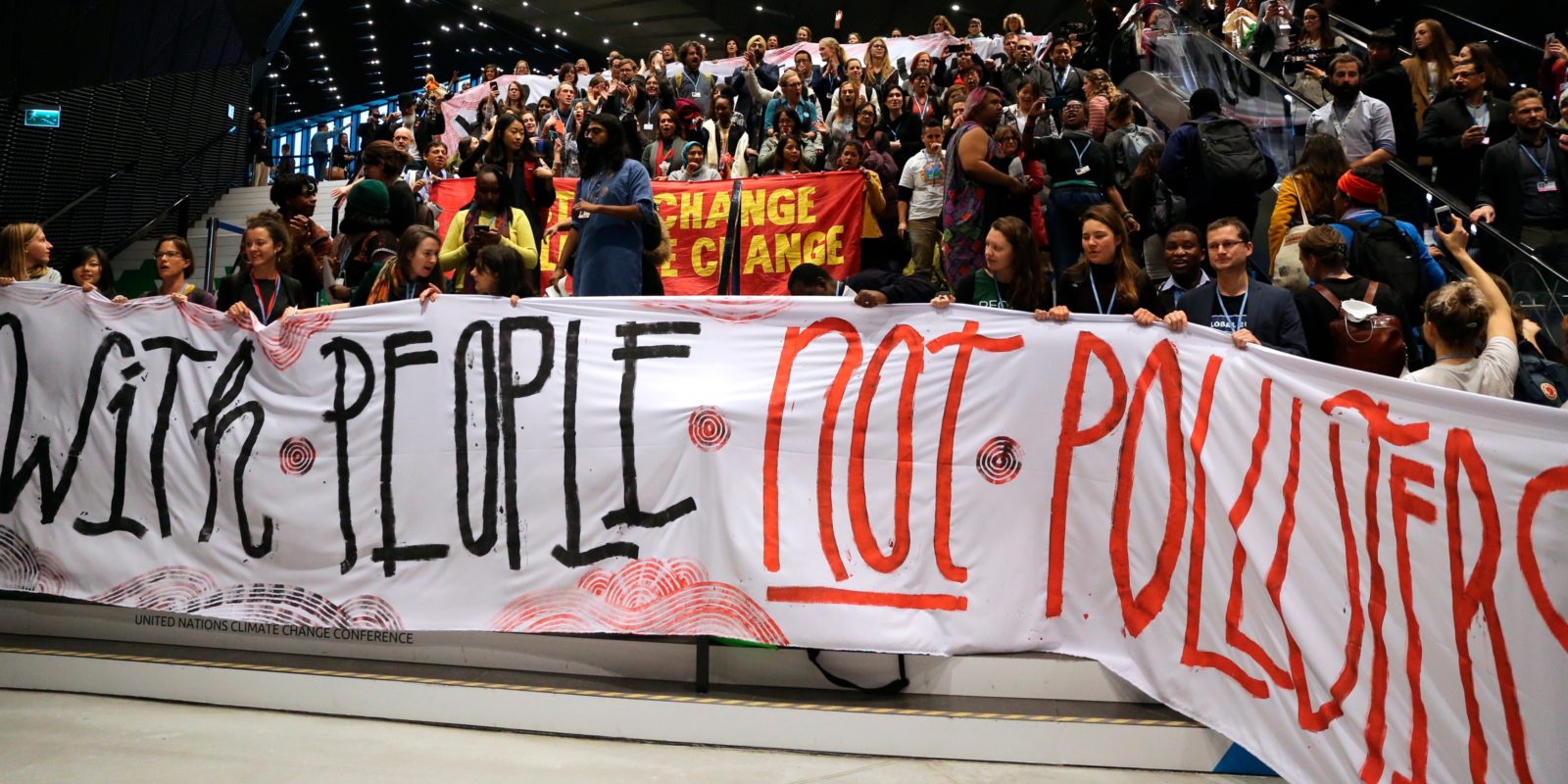 A demonstration of environmental organiSations is held alongside the UN Climate Summit COP24 in Katowice, Poland, 14 December 2018. The COP (Conference of the Parties) summit is the highest body of the UN Framework Convention on Climate Change (UNFCC). Expected at the meeting are close to 30,000 delegates from all over the world, including government leaders and ministers responsible for environmental policy. EPA-EFE/ANDRZEJ GRYGIEL

Global investors backed by trillions of dollars are emerging as a new force pushing companies and governments to tackle climate change.

While the world has grown used to placard-carrying climate activists, in the vanguard of the climate campaign for decades, a growing number of global institutional investors such as pension funds are now calling for action. And they are more difficult to ignore.

At the UN climate summit in Poland in December 2018, 415 investors managing $32-trillion called on governments to speed up action to combat climate change.

Institutional investors are also using their financial clout to get the big polluters, such as oil companies, to cut emissions.

The Financial Times calls these investors the “new warriors for climate change” and says the motivating factor is a realisation of the financial risk involved in these investments.

The move to a low carbon economy is underway, but the big question is: Will the transition from the polluting, carbon-intensive “brown economy” to the cleaner, low-carbon “green economy” be fast enough and big enough to keep the world below a 2°C average global temperature increase?

Discussion around this question was a theme at the 2019 Partnership for Action on Green Economy Ministerial Conference in Cape Town, where about 500 local and international delegates discussed how to advance to an “inclusive and sustainable” economy.

An alliance of five UN agencies, governments and others, the partnership began in 2013 with the aim of challenging the business-as-usual economic growth and business models which have kept the world going around, but have also led to a massive problems such as pollution, resource depletion, a widening inequality gap and global climate change, increasingly regarded as the biggest threat humanity has faced.

The partnership emerged from the Rio+20 conference where there was a call for the international community to help nations move to a green economy.

The Department of Environmental Affairs hosted the Cape Town conference.

There was recognition at the conference of the emerging role of investors in trying to move governments and business in a low carbon direction, but also recognition that the transition would not be realised if left up to the market alone.

While businesses were used to facing changing realities and adjusting accordingly, a radical change such as restructuring the economy needed governments to create a conducive environment and policy certainty.

Guy Ryder, director-general of the International Labour Organisation, said labour, government and employers would have to sit together and work out solutions. It had to be a just transition.

“You have to have explicit national processes and plans for change. If left alone, people dig their heels in and hang on to what they’ve got, because the future looks frightening.”

He stressed that there was no value in understating the challenges ahead. The change would have a “massive impact on work” and there would be winners and losers.

“The task ahead is complex because it entails major changes in how we produce, live and consume.”

It had to happen because climate change was running ahead faster than our capacity — or our will — to deal with it, Ryder said.

There were three main areas for action on the path to a green economy, Ryder said.

The first was to shift the $90-trillion the world was expected to invest in infrastructure over the next 20 years, away from carbon-intensive infrastructure and into low-carbon energy-efficient projects.

He was referring to the findings of the Global Commission on the Economy and Climate released in 2016, co-chaired by climate economist Lord Nicholas Stern, which found the world could not continue business-as-usual in infrastructure development as it would lock us into high-carbon infrastructure and so exacerbate climate change. It called for an “urgent shift” to ensure the $90-trillion was spent on green technology.

“These infrastructure investment choices can take us in the right or wrong direction,” Ryder said.

The second area was to “radically rethink the way we consume and produce”.

“This requires decoupling economic growth from resource consumption and minimising waste and pollution. Just a 5% increase in the recycling can generate six million additional jobs around the world.”

The final area was reshaping the future of work in a green economic setting.

“Some still think you have to choose between jobs and the green economy.”

One of the realities was that new jobs in the green economy would not necessarily be in the same places where brown economy jobs had ceased.

“That is going to be the case. The jobs of the future will not always be where the old jobs had been geographically, and the skills sets needed will not necessarily be the skill sets of the past. These are challenges.”

Governments would need to work through solutions with labour and employers.

“You have to have plans. It is illusionary to leave it up to market forces. If you just ‘let it happen’, you will have a very difficult future.”

The special report on Global Warming of 1.5°C released in 2018 by the Intergovernmental Panel on Climate Change (IPCC) described the clear benefits to people and the natural environment if global warming were limited to 1.5°C.

Global temperatures have already risen by 1°C since pre-industrial times. The report said it was possible to limit the increase to 1.5°C, but it would require rapid, far-reaching and unprecedented changes in all aspects of society by 2030.

This included a restructuring of the economy.

We are far from that target. Current commitments by world governments to cut greenhouse gas emissions are so low they are setting the world on a trajectory of 3°C.

Kumi Naidoo, secretary-general of Amnesty International, told delegates the world was “in denial”.

Speaking to Daily Maverick, Naidoo said the Stern Report in 2006 had said the world needed to spend 1% of global GDP a year on tackling climate change to avoid far greater costs of inaction later.

“This is not happening. If there is an ecological collapse, society and the economy will collapse, and that is the trajectory we are on.”

South Africa has had a taste of increasingly severe extreme weather, with a three-year drought in the Western Cape which led to the prospect of Cape Town’s taps running dry; the devastating Knysna fires after prolonged drought and floods in Durban.

According to Santam, the Knysna fires and the Durban floods in 2017 led to claim payouts of more than R2-billion — its largest annual claims figure to date.

There is a push from the big institutional investors to get companies to make full disclosure on their climate risks to enable investors to make the right investment choices.

Nicky Newton-King, CEO of the Johannesburg Stock Exchange, told delegates stock exchanges could help get the right information out there.

“We do think we have to be doing a better type of reporting that is true and not greenwash,” Newton-King said.

What was needed was to get data out there in a digestible form for companies to grasp.

“What do we mean by ‘green’, and why does it matter? Then we can say why you should start to change behaviour. We think everyone is on the same page,” Newton-King said.

“Investors could right now say: ‘I’m prepared to take a longer pay-back period because it is the right thing to in this country.’ ”

One of the initiatives that are helping companies to do this is the UN’s Principles for Responsible Investment (PRI) that began in 2006.

They are a set of six principles that provide a global standard of responsible investing, taking into account social, environmental and corporate governance.

Nicole Martens at the PRI South Africa office told delegates that the investment institutions that have become PRI signatories represented $85-trillion to date.

The first years were spent explaining the concept. Now the focus was on practicalities.

“Now people are saying: ‘So what do I need to do?’ We generate guidelines that are not prescriptive, but which say: ‘This is the kind of question you need to be asking.’ ”

While delegates spoke of many initiatives that were underway to make the transition to a low carbon economy, the general feeling was that it was too little happening too slowly.

Daily Maverick asked Elliott Harris, UN chief economist and assistant secretary-general for economic development, why the move was slow, given that the green economy offered so many business opportunities.

“One reason is inertia. Companies are in their comfort zones, making reasonable profits and are staying with what works for them. The other is fear. Many think if they go ahead and spend money to make the necessary investments, it will make them have a less competitive advantage.

“Yet we have found the exact opposite. In every stock exchange where companies disclose their environmental risk, they have a higher share price performance than those that don’t,” Harris said.

Stephan Contius, head of the UN division for Agenda 2030, said in closing that what was needed were “agents of change”, people who could not only explain the urgency of changing to a green economy but could also explain the tools needed to implement change.

“Citizens want to live in a better world, fighting inequality, huge unemployment, climate change, loss of biodiversity and life-endangering pollution of air, water and soil. We have only 12 years left. We need to accelerate change.” DM