After the ANC manifesto, it’s the turn of the DA and EFF to show their hand 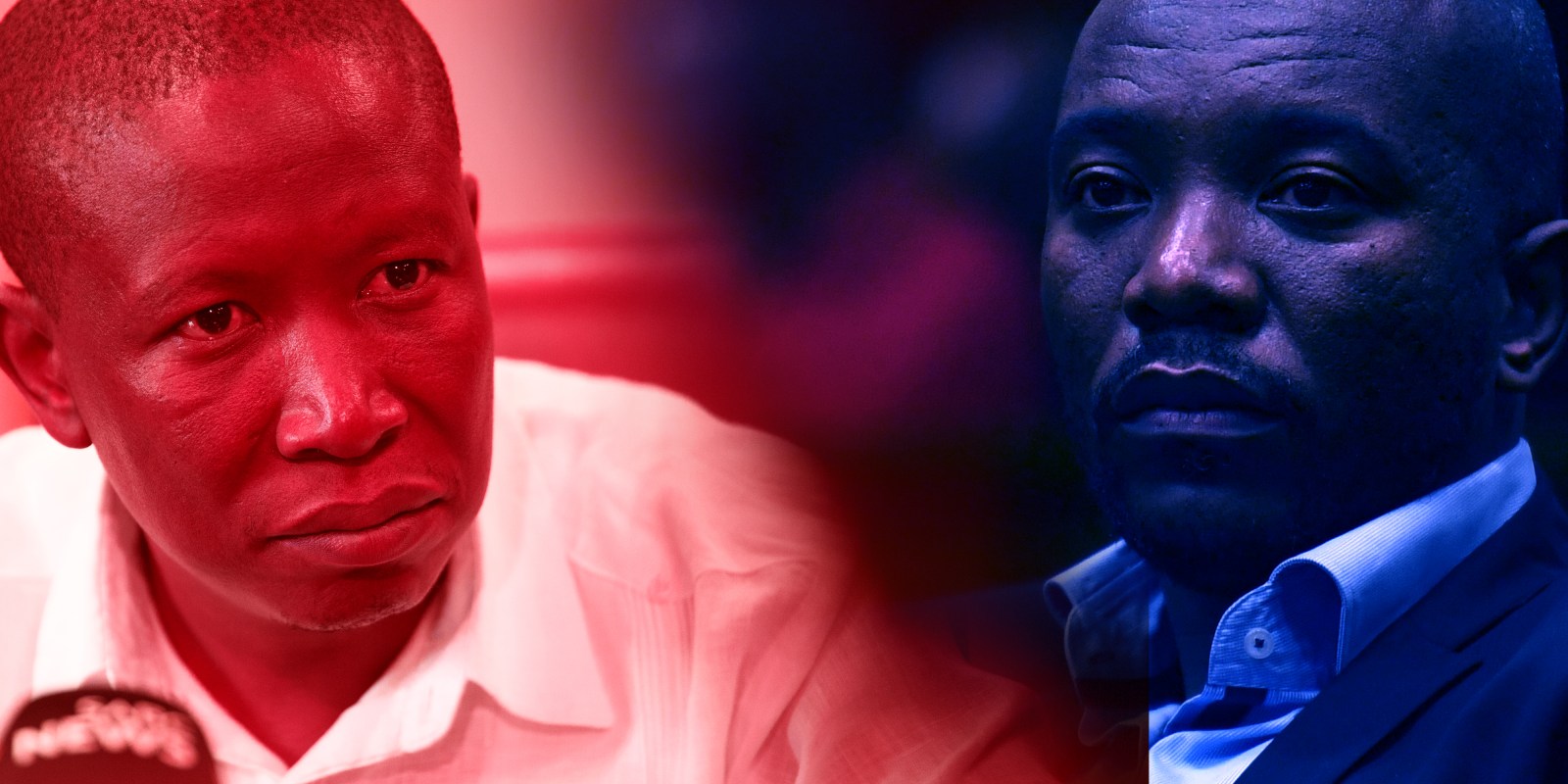 With its manifesto, the ANC has stabbed its flag into the middle ground of our politics, attempting once more to be a party for everyone, with policies which speak to most people. That is always a difficult political feat to achieve, especially in a country as polarised as South Africa is these days, and so no matter how well prepared and how many bases are covered, there will always be holes for the other parties to poke through. And as the ANC’s manifesto revealed some of its internal politics, the policy documents coming from the other parties may show what strategies they will follow in trying to poke holes in the ANC’s ageing monolith.

In the past, most elections have been about the ANC’s track record. It was the party that had to fix its governing mistakes. The many scandals were brought forth and dwelled upon by its critics on the campaign trail. But this time there is the potential for this aspect to be treated quite differently. The DA now has a track record of governance not just in the Western Cape, but also in Joburg and Tshwane, and a partial record in Nelson Mandela Bay. Its travails with Patricia de Lille in Cape Town are likely to be used against it.

The same can be said, to an extent, for the EFF. Though it is not in government, claims around how it may have influenced tenders in Joburg will be thrown against it. The VBS scandal, in which it is claimed that the brother of its deputy leader Floyd Shivambu received R16-million, will also be brought up again and again.

It is against this backdrop that they are to respond to the ANC’s manifesto.

For the DA, the first question may well be about what kind of campaign it wants to fight, and what its actual aim is. While every party (including even Mzwanele Manyi’s African Transformation Movement and Hlaudi Motsoeneng’s African Content Movement) will claim that they are running to actually become the party in power, the DA will have to make a real decision about it. Is it going to run a broad-based campaign in the hope of continuing its attempt to become a party for everyone, and so hope to gain more votes from every part of society, or does it focus on just one group, to ensure that it does at least improve (however slightly) on its 2014 showing?

To put this more crudely, does it focus on those who are in the middle classes (and particularly minorities), or does it try to have as broad an appeal as the ANC?

This is a rather complicated, and difficult, decision to make. Some of the DA’s recent problems appear to have stemmed from the very nature of our society. Its racialised inequality means that to appeal to everyone is practically impossible, and it is almost inevitable that some tough political decisions will have to be made. This may mean that it would be simpler and easier to run a campaign aimed at promising to protect the “haves”. In an environment where land expropriation could be a major issue, this opposition to it might gain quite a bit of traction. At the very least, it may ensure that the DA’s core voters in the suburbs do in fact turn out.

But it could also cause problems with the longer-term project, in that other voters may be turned off by it.

This means that for longer-term strategic reasons, the DA may have very little choice but to actually create a manifesto with as broad a reach as possible. It may indeed have to pay attention to exactly the same issues as the ANC document. However, it is likely that the DA will suggest that they, and they alone, can reform education, create a better healthcare system, and, crucially, get the economy going. Perhaps the most interesting part of the manifesto will be about the economy. It is likely to say, again and again, that its government in the Western Cape has been able to create jobs, while other ANC provincial administrations have not.

One thing is almost certain: the DA’s manifesto will have a big focus on corruption. This is for two main reasons. First, it is a real issue with voters, particularly because of the legion of scandals still coming from the ANC. Second, the DA needs to find a way to claim that the ANC is still more the party of former president Jacob Zuma than it is the party of now President Cyril Ramaphosa. One of its major problems is that Ramaphosa is now the symbol of the ANC. It needs to change that, and fast, finding ways to counteract what appears to be his own personal popularity (as evidenced by the fact that he is the only ANC leader depicted on the ANC’s election pamphlet).

It is also clear that the DA is likely to use the issue of xenophobia to get votes. It has already brought up this issue and its public office bearers have spent some time talking about foreign nationals. However, there is a risk here too, in that some of its own members may well rebel against this line of political argument.

Some of the DA’s problems may stem from its attempt to get this overall mass appeal, to do what the ANC is trying to do, in occupying the central political ground, essentially claiming that they want to do the very same things as the ruling party, just better.

The EFF, of course, does not have that problem.

This may turn out to be a turning-point election for the EFF. Its own secretary-general, Godrich Gardee, has said that these are “do or die” elections for the party. If Julius Malema is unable to get above around 15%, it could turn out to be the end of his momentum, and he may battle to keep the party together, especially if his past finally starts catching up with him. If he is able to get well above 15%, his already loud voice on the national stage could become even louder (difficult to imagine, I know), and he could find himself in a strong negotiating position.

But here there may also be decisions to make about strategy and future direction. There are still lingering suspicions that Malema may want to go back to the ANC, or would provide support should coalitions be necessary. This may mean there are certain lines he cannot cross during the campaign. Or, then again, it may not. Most of his previous political moves defied gravity and it is entirely possible that the laws of politics, physics and South Africa do not apply to Julius Malema and his party.

It is already clear that the EFF may make this election about land, and pummel the ANC on whether its land policies are strong enough. Malema is bound to claim that only the EFF would take land from white people and give it to black people. However, the EFF’s policy of nationalising land may prove difficult to sell. The ANC has already said it would give land, in the form of tenure, to people – making Malema fight for the votes of people who would have to vote against their own direct interest. This may be difficult to do, even for a populist wizard of Limpopo.

Still, Malema may feel he could make some progress by simply disrupting Ramaphosa’s project within the ANC, by making his message rhyme with those in the ANC who want him to be harder on the land issue.

Previous EFF policy positions have also been difficult to justify. In the 2016 local elections, it said that 50% of the basic goods and services consumed in a municipality would be produced in that municipality, which would mean the institution of tariff barriers around certain towns and cities. It is difficult to see how it would be possible to implement this. Its 2019 manifesto may well have similar, impractical and sometimes downright impossible-to-implement claims.

Another problem the EFF may have is that while land may be a potent political issue, it may need to show that it has other ideas too. In many democracies, health and education are key issues for most voters. Its plans for schools and hospitals may be important in that it may need to demonstrate that it does have the capacity to actually govern.

However, another strategy for the EFF may be for the party to take the ANC’s manifesto, and just make it more radical. This would mean that in policy terms, they simply make it more in favour of their constituency. This would involve strong rhetoric about equalising the economic relationships between the rich and poor. Inevitably, this would also involve strong words directed against minorities, and particularly white and Indian people. Considering the political situation the EFF is in, it makes sense to push hard against Ramaphosa’s reconciliatory approach.

Of course, in the end, it is worth asking, again, how important election manifestos actually are in this context. Like in many other places, they are often ignored, due to the fact that politics is often about other issues. In the end, the manifesto launches may well be more about the image and identity of the party that is being portrayed than about actual governance. One way to find out. DM