The politics of 2019 – sharp, divisive, dangerous 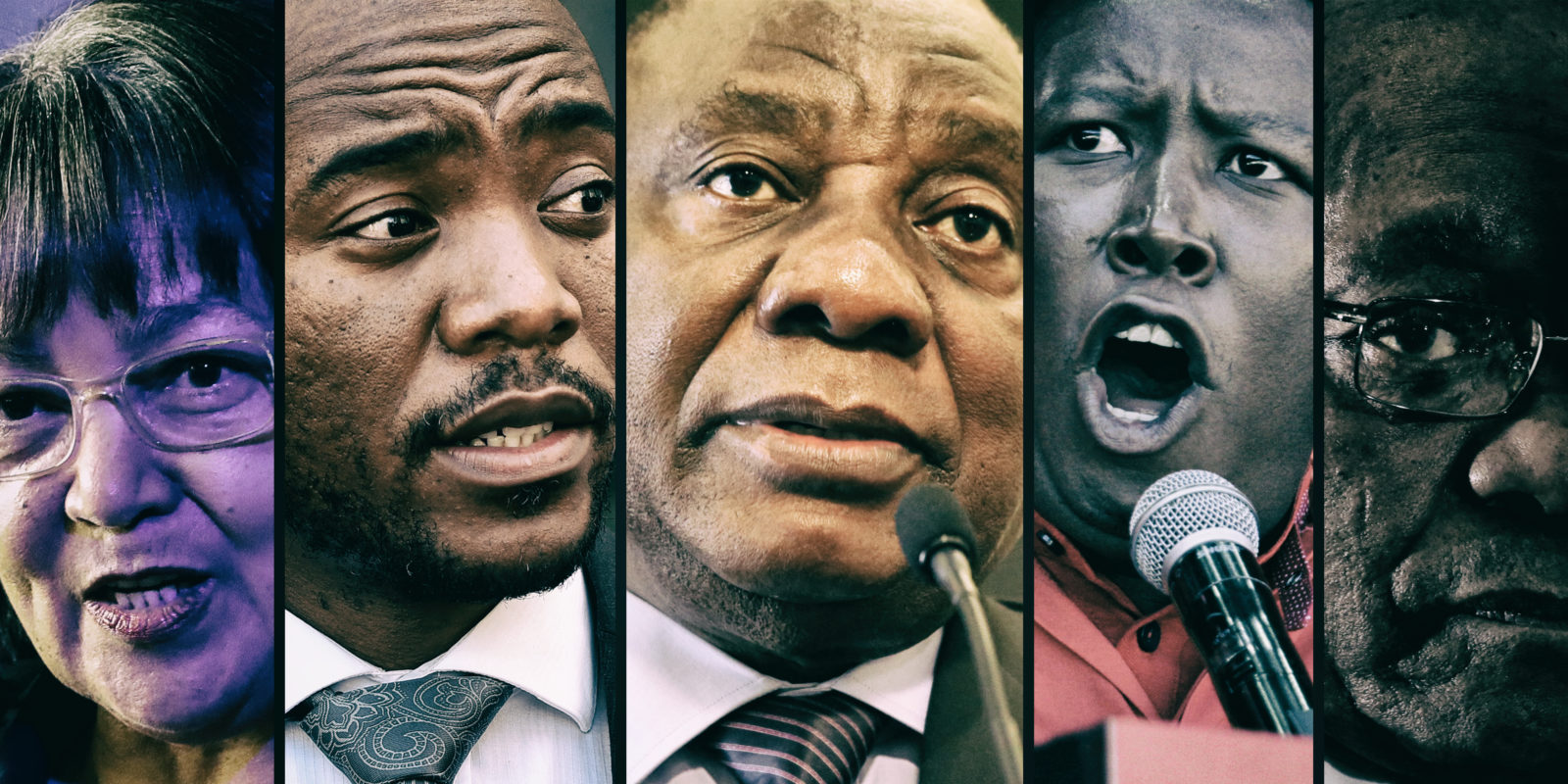 It has long been predicted that 2019 would be an important year in South Africa’s political history. A series of different political dynamics are bound to culminate around the national elections, currently scheduled for some time in the autumn. Still, more likely than not, 2019 will see multiple wild rides, with unknown outcomes, and damage, to the country.

It is still way too early to make predictions about how the 2019 polls could work out, although new polling evidence suggests the Ramaphosa-led ANC may be on track to hover around the 60% mark. However, former president Jacob Zuma’s comments about land on Twitter last week, the probable launch of even more new parties (that may all, in fact, have the same ultimate funder), combined with President Cyril Ramaphosa’s sometimes tenuous grip, mean that the roller coaster is still a long way from that ultimate moment when the riders with upset stomachs enter the end-stretch of this particular track.

Even as this is only the second week of 2019, much has already happened. Zuma used his shiny new Twitter account to celebrate the New Year on a quad bike, before making a statement on land that clearly looked like a call to arms for an already pumped-up segment of the EWC political spectrum.

Over the weekend the ANC’s national executive committee met in what’s called an “extended NEC” meeting with the leadership of the provinces and the leagues, to discuss the lists of candidates who would go on to compete for the seats in the National Assembly and the National Council of Provinces. Then, on Saturday evening, the ever-industrious Mzwanele Manyi suggested on Twitter that he is going to launch yet another new political party. All of this suggests that the holiday season over, the SA political bandwagon is picking up speed.

Perhaps the most important development is still what is happening around the ANC’s national list process. It is likely to be some time before the final list of candidates is actually made public, as the party has to submit it to a “vetting process” first. Just the way the first official ANC press conference of the year was held may have been a reminder of the problems facing the party. It was hosted by the two “acting national spokespersons” of the party, Dakota Legoete and Zizi Kodwa. Pule Mabe, the official spokesperson, is currently “on leave” after being accused of sexual harassment. Considering the importance of this process, it could have been expected that the secretary-general himself would address the conference. But Ace Magashule perhaps does not feel as if he would like to face too many questions nowadays.

The two spokespeople emphasised, again, that “candidates must be electable in terms of the guidelines” and “must enhance the integrity of the ANC”. To add to the complications around it, there is a long list of elements that the final list has to satisfy. It has to be 50% women, have a proper provincial representation, ensure that it has proper racial diversity, and still attempt to represent the political factions as well.

There is, obviously, going to be a massive political contestation, also known as a fight. The stakes involved are just too great. If Zuma is able to assert his influence over the process, Ramaphosa may eventually find himself hostage to a hostile ANC caucus in the National Assembly, which would come with serious consequences for himself, his choices for Cabinet, and the country.

This means that any “vetting” process is bound to be politicised, and likely to take a long time before the list is actually, properly, finally, definitely, assuredly, finalised.

Even then, there could still be a fall-out after the process is over.

In the meantime, there are events occurring this week to consider. In the past, the ANC has celebrated its January 8 birthday by holding a big rally in a province on the Saturday after that date. It has also made a point of going to all the provinces in turn. While it was in KwaZulu-Natal in 2013, it is going back there this year in what could be an indication of how high the stakes are in, and for, the province. KZN matters to the ANC, and has perhaps the largest number of voters who have changed their votes since democracy. It was first dominated by the IFP in 1994; the ANC won it in 2004 and dramatically increased its majority there during the Zuma era, but now has no leaders from KZN in its Top Six leadership.

This year Ramaphosa will be holding another big event on Tuesday 8 itself before the main rally on Saturday. Already there have been suggestions that this will make life difficult for him; the KZN is still, to an extent, Zuma territory.

Considering Zuma’s comments about land last week, some officials are probably correct to be concerned. Zuma said, in a video posted on Twitter, that he did not understand why there was so much discussion about land expropriation without compensation and inferred that he believed it should simply happen.

He also said, “My information says European countries don’t sell land to private people or companies. It is in the hand of the state, if you want to use it, you lease it.”

This does not appear to be true. While there some countries with complicated ownership systems (the UK has a bizarre system of leasehold and freehold and sometimes “hundred-year leases”), generally speaking, land ownership rights in most European countries are enshrined in law for individuals. In other words, Zuma was channelling Donald Trump.

But more important than that was that Zuma’s comments do not accord with the view of the ANC. The ANC has said many times that it does believe in individual land ownership, that individuals should be able to own land, and to sell it and to pass it on to their children. Some in the party have said that’s why they wanted the “land clause”, Section 25 of the Constitution, to read the way it does, precisely so that black people would not be dispossessed of their land again.

Zuma’s comments do accord, however, almost exactly with the views of the Economic Freedom Fighters, who say that all land must be nationalised and placed under government control. On the face of it, it does appear that Zuma is working with people outside the ANC, while refusing to ride into an ANC sunset, as all of his predecessors have.

At the same time, Manyi has said that he will on Wednesday unveil his “new political home” and introduce its “national leadership”. Considering that this “national leadership” needs “introducing”, it may be a suggestion that he too is forming a new political party. If this is the case, he would be joining Hlaudi Motsoeneng’s African Content Movement, the Mazibuye African Congress and the Black First Land First Movement (BLF), all of which appear to have links to Zuma, or have had to deny that they are linked to Zuma.

While it is possible that all of their leaderships have different agendas, it is also possible that their marching orders, and funding, come from the same source. It is only natural for many within the ANC to suspect that these parties are being created to draw support away from the Ramaphosa-led ANC, and to gain some kind of negotiating ground, should there be a need for coalitions after the elections. It doesn’t take much imagination to see that there is enough money flowing around for such efforts.

History, however, shows that new parties generally battle to make any kind of headway. To get just one seat in the National Assembly could mean you have to get at least around 50,000 votes (this figure can change dramatically; based on the percentage of people who vote, it could go up to around 100,000). This would mean that together, just to get four seats (or 1% of the vote) they would need around 200,000 votes. To have a real impact, to get say 5% of the vote, the tally you may need to have any real impact, you may need over a million votes. With very little name recognition, a crowded field, and very little campaigning experience, it is likely to be very difficult for these minions to achieve much. That won’t stop some people from presuming that they are legends in their own Twitter timeline, of course.

In the middle of all of this, there are still processes that will continue under their own steam. The Zondo Commission into State Capture will continue, amid reports that former Hawks head Anwa Dramat will place Zuma front and centre in the story about how he was ousted from his position. This again could place the ANC under pressure to explain that “the party is not on trial” at the commission.

Meanwhile, there is still pressure on the DA and the EFF to improve their positions.

In 2017, the DA itself battled to control its own internal narrative. While Patricia de Lille has now left for other, good pastures, the arguments around “diversity” and “quotas” in the party are unlikely to end. That is because of the very structure of our society, and the type of broad-based appeal it is trying to create. Should the party lose significant support in the elections (and there is some polling that suggests it could), that may well lead to calls for Mmusi Maimane to step down. However, in the absence of an obvious candidate with support from across the party to succeed him, that could lead to unsolvable divisions in the DA, and its own possible process of splitting.

For the EFF, as ever, so much of its fortunes rest on its leader, Julius Malema. Should he be able to withstand the claims of corruption levelled against the EFF after the VBS scandal, the party may be able to weather part of that storm. So far, no polling has indicated that it has lost significant support. However, by its own admission, this is a “make or break” election for the EFF. Should it not be able to go above 10% or even 15% it may lose its ability to dominate the national discussion. And without that, that could lead to a much longer-term slide.

While it is entirely possible that the elections actually do lead to big changes in our politics, it is also entirely possible that they won’t. In other words, that the results of the elections are not that different from the results of 2014, despite everything that has happened since then. That would mean our political holding pattern continues for some time, keeping the real power play inside the ANC for years to come. Happy 2019, everyone! DM

The world according to David Mahlobo: everyone is a spy, everyone/everything is being watched, including the State Capture Commission