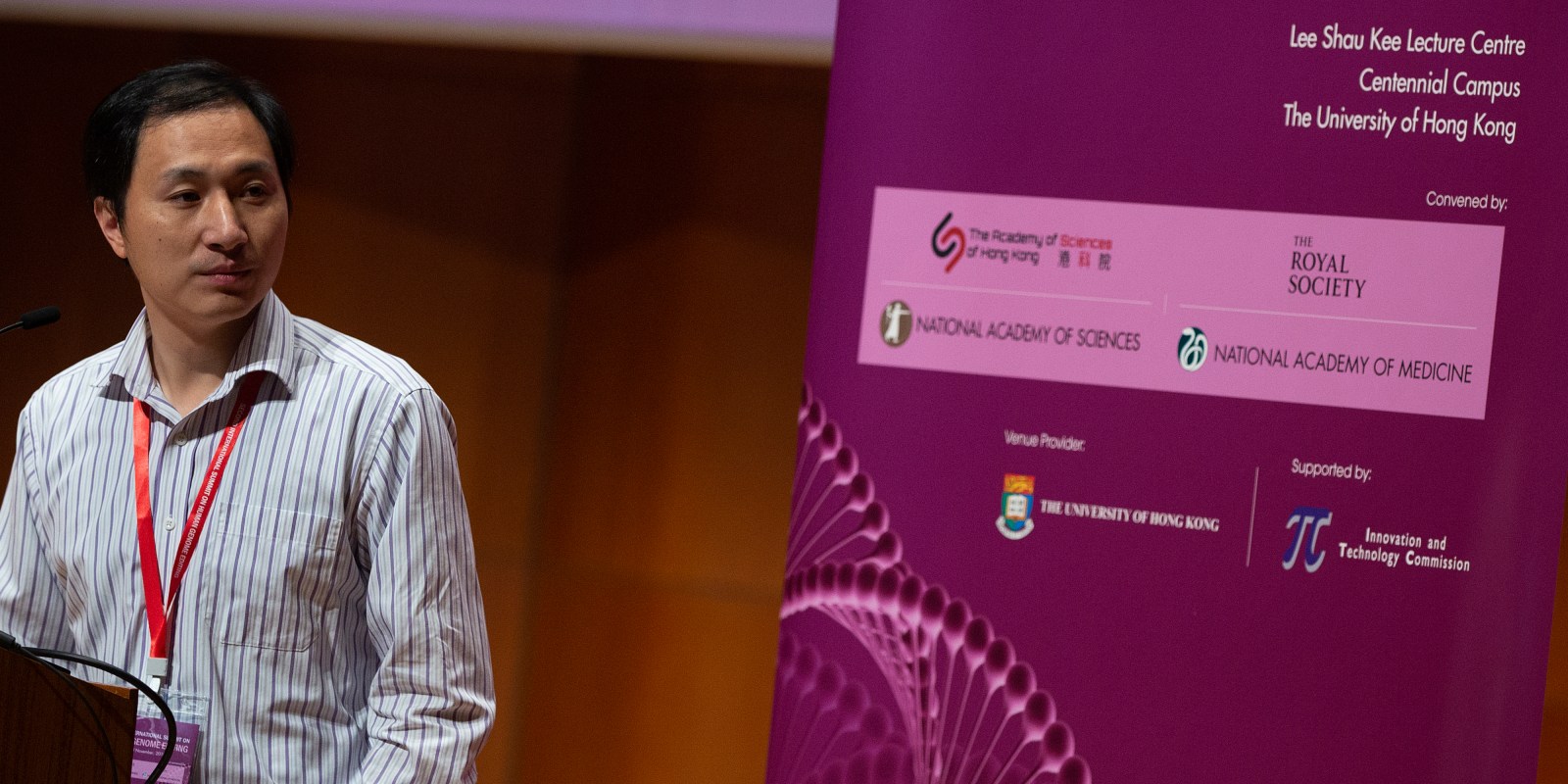 Scientist He Jiankui presents his work at the Second International Summit on Human Genome Editing, at the University of Hong Kong in Hong Kong, China, 28 November 2018. He Jiankui claims to have created the world’s first genetically-edited twin babies, named Lulu and Nana, and has defended his work amid a storm of criticism from the world’s scientific community. Critics have called the scientist’s work medically unnecessary and ethically questionable. EPA-EFE/ALEX HOFFORD

Chinese scientist He Jiankui has ignited global controversy by announcing the birth of Lulu and Nana, the first twins whose DNA has been genetically edited to make them resistant to HIV infection. The birth of the twins has opened up a can of worms as scientists and governments ponder the ethical, legal and social dimensions of human genetics and genomics research — and the unknown consequences.

Who can predict what the future holds for humanity’s genetic heritage? Is it just a matter of time before we design our own babies — some genetically altered to enhance desirable traits and others edited to weed out weakness and imperfection?

A few decades ago — when society was still digesting the ramifications of the first human heart transplant, the first test-tube baby or Dolly the first cloned sheep — the concept of scientists cutting-and-pasting selected genes to re-engineer humanity was still the stuff of science fiction.

But not any more.

Just last week (November 26), Chinese scientist He Jiankui ignited global controversy by announcing the birth of Lulu and Nana, the first twins whose DNA had been genetically edited to make them resistant to HIV infection.

Developments like this may be applauded by families who have watched their loved ones suffer or die from disease or disability. But He’s controversial research has also opened up a can of worms as scientists and governments ponder the ethical, legal and social dimensions of human genetics and genomics research — and the unknown consequences.

Coinciding with this controversy, the Academy of Science of South Africa (ASSAf), released a 126-page consensus study this week (December 4) which urges the government to consider stricter control measures, including an independent advisory body to monitor developments in the rapidly evolving field of genetics and genomics research.

Calling for the establishment of a new South African Human Genetics Advisory Board, the academy report notes that local legislation in this field is very limited.

The 13-member consensus panel, under the leadership of Professor Michael Pepper of the University of Pretoria, also says the establishment of human “biobanks” in South Africa is similarly unregulated.

Biobanks (which store and preserve anything from human tissues to spit, blood, serum, proteins, semen and cell cultures) also offer substantial financial opportunities, with one recent study estimating the global market for human biological samples to be worth about US$22.3-billion annually.

“We live in an era of rapid growth in the fields of genetics and genomics. Great benefit is to be derived from this work, which has the potential to impact positively on the health and quality of life of all members of society,” the panel says.

“Work in these fields is also likely to impact positively on the economy through job creation and the formation of new businesses including small to medium enterprises. For these benefits to materialise, however, skills development and clear guidance on how to implement these new and upcoming technologies are required.”

Boundaries must be defined clearly and the developments monitored “to ensure that benefits are shared by all and that no harm is done”.

But quite apart from human biobanks and genetic editing, there are other ethical and legal dimensions associated with genetic testing, where people seek to discover more about their ancestral roots or the likelihood of their children inheriting a potentially fatal or debilitating genetic condition.

What if such tests were to reveal a history of psychiatric illness, cancer or Parkinson’s disease?

What if these tests were to cast doubt on whether your father really is your father?

And what if genetic information stored in a biobank were to fall into the hands of your employer, your medical aid or insurance company? Could this information be used to load your premiums or to refuse insurance cover to you and your family?

The National Health Act states that no one may disclose any personal health information to others unless this happens with the consent of the relevant person, if required by court order or if non-disclosure constitutes a serious threat to public health.

The right to privacy is also protected by the Constitution and by common law, but the ASSAf study foresees several examples where information from genetic research could lead to direct or indirect stigma or discrimination.

And while researchers might seek to render genetic sample information anonymous, the study notes that DNA samples can never really be truly anonymous.

There are also broader implications for families and communities — especially where some family members disclose information on their DNA testing that others do not wish to disclose.

“In recent years, there has been a proliferation of genetic and genomic testing and the use of molecular technologies… examples include the emergence of nutrigenomics (genetic tests to guide nutritional choices), wellness tests (using a limited number of genetic markers of questionable relevance to health) and sports performance genetic tests that are recommended by dieticians, biokineticists and others.

“It is imperative that the diagnostic validity and standards for genetic tests that are being offered to patients in South Africa be appropriate. Currently, medical insurance companies decide on the appropriateness of particular tests vis-à-vis other tests, but the decision-making process is opaque and it is not clear which considerations are made to determine which tests will be offered.”

A further concern is that the contracts between medical insurance companies and the companies producing genetic tests are not open to public scrutiny.

The report notes that a number of hard and soft legal instruments have been developed internationally to deal with the risk of “genetic discrimination”, particularly in relation to using genetic information as a basis for excluding individuals from purchasing health or life insurance.

In South Africa, the Constitutional Court had ruled that HIV was not a “disability,” but found nonetheless that discrimination on this basis would constitute an infringement of dignity, as it was discrimination based on a person’s medical health.

“By analogy, unfair discrimination on the basis of a person’s genetic profile would be unconstitutional.”

There are other equally thorny questions to be resolved: Who owns genes? Who should benefit from genomic research?

The consensus report says there is a widely held view that genomic resources should be seen as a common good, implying that use or possession should not lead to monetary or other gains for individuals.

“South Africans are sceptical about individuals obtaining exclusive rights and potential monetary gains out of samples and data provided in the context of research or clinical care. Obviously, however, a genomics project cannot be sustainable in the absence of funding. Equally obviously, some monetary gain is inevitable given the prevailing proprietary system, which recognises intellectual and other property rights.”

Overall, Pepper and his fellow panellists suggest that there is an acute need for new regulations and strict sanctions.

“Although ethics policies are in place at, for example, (research) institutions, they are not enforced or the sanctions for violation are minimal. To eradicate the unethical practice, which has the potential to harm the health care of society, there should be no tolerance for unethical practice at any level.” DM

The full report is on the ASSAf website: www.assaf.org.za