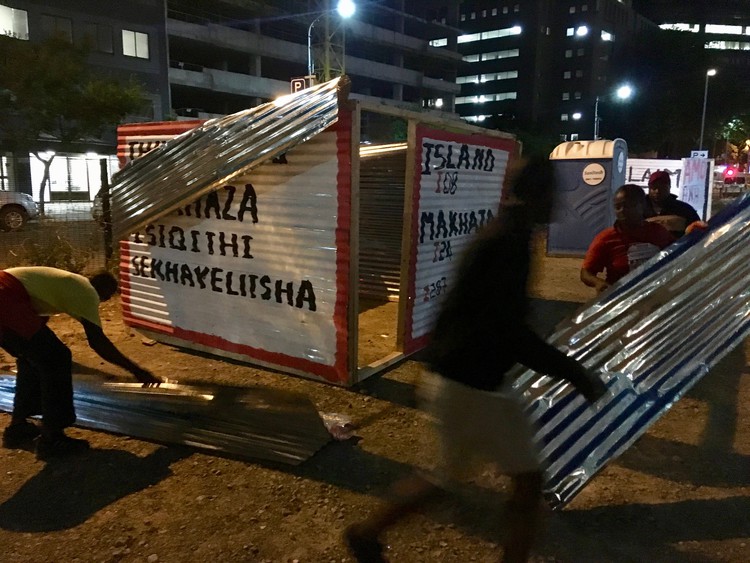 Primary image caption: Housing activists at Site B in the Cape Town inner city dismantle a shack after being served with an order from the Western Cape High Court on Tuesday evening. Photo: Daneel Knoetze

An order of the Western Cape High Court brought protest action by Reclaim the City on Site B in the Cape Town inner city to an abrupt end on Tuesday night. As the housing activists were settling in for their first night in shacks they had erected that morning, police officers arrived and read aloud the interdict. Lawyers who had secured the interdict on behalf of Growthpoint – the developer who purchased the property from the City of Cape Town in 2016 – were also present.

After a brief discussion, the activists decided to comply with the order to vacate. A group of young men and women went to work with hammers to break down the shacks. On Rose Street, alongside growing piles of mattresses and corrugated sheets removed from the site, another group toyi-toyied in front of a contingent of armed security guards. The guards, dressed in black riot gear, were backed up by an armoured vehicle with the words: “Tactical Response Team”, “Danger Keep Back 200m” and the image of a wolf emblazoned on it. They would not respond to queries about whether they were deployed by Growthpoint, the city or a third party.

Bevil Lucas, a spokesperson for the activists, said that the departure from the site was not a defeat for Reclaim the City (RTC) and the other organisations and communities that had joined in. “This was never about a permanent occupation. This was a symbolic protest to raise the issue of the housing crisis faced by working class,” he said.

Growthpoint’s application to the High Court however framed the erection of the shacks as a serious risk to the property. In an accompanying affidavit, the developer’s asset manager, Timothy Irvine, wrote that the aim of the activists was “clearly to unlawfully expropriate the land” and that Growthpoint faced “the very real and substantial risk that its property will be lost to it”.

Irvine wrote that he is aware that the action was framed as “symbolic”, but he questioned whether those making the claim could speak on behalf of all present and future occupiers. In his affidavit, he accused the organisers of “plot-farming” which he explained as charlatans exploiting poor people by selling fake housing rights to plots of land which they do not own.

The Western Cape High Court heard Growthpoint’s application and handed down an order which authorised the City of Cape Town and the police to bar people from entering the site and to remove the shacks and belongings.

RTC said the protest was in response to the sale of the land by the City of Cape to Growthpoint at a price which undervalued the land by millions of rand. RTC advocates for desegregation in Cape Town through affordable housing development on state land, especially in the inner-city. When the irregularities in the sale of Site B came to light in September, the movement initiated a “people’s forensic investigation”. The act of civil disobedience was the latest in a series of purposefully disruptive actions aimed at demanding answers from City officials and the developer who financially benefited. RTC started by picketing the offices of consultants whom the activists speculated may have used inside knowledge of government processes to advise Growthpoint on the bargain purchase. Recently, the “forensic investigation” turned its attention to the city officials.

About a week ago, supporters staged a dawn picket outside the house of Deputy Mayor Ian Neilson, who oversaw the 2016 sale. Neilson refused to meet the activists and complained that they had woken up his neighbours. The action also spurred DA provincial leader Bonginkosi Madikizela to come to his colleague’s defence. In a DA statement, Madikizela accused RTC of “thuggery and lawlessness” and of threatening to enact “mob justice” on public officials.

“I can’t imagine what this must have done to his family,” Madikizela said.

Mandisa Shandu, co-director of the Ndifuna Ukwazi Law Centre, which represents RTC, said that her clients’ actions were a response to the city’s failure to account for the irregular sale of Site B. While the action focused on Site B as well, it was, in her view, about something bigger.

“What happened today for the first time was that communities from all around Cape Town came together around the claim that land is at the very heart of a transformative agenda, and that the City of Cape Town should recognise and use it as such,” said Shandu. DM