SAA needs R21.7bn just to stay in the air until mid-2019 – failure a systemic threat to South Africa 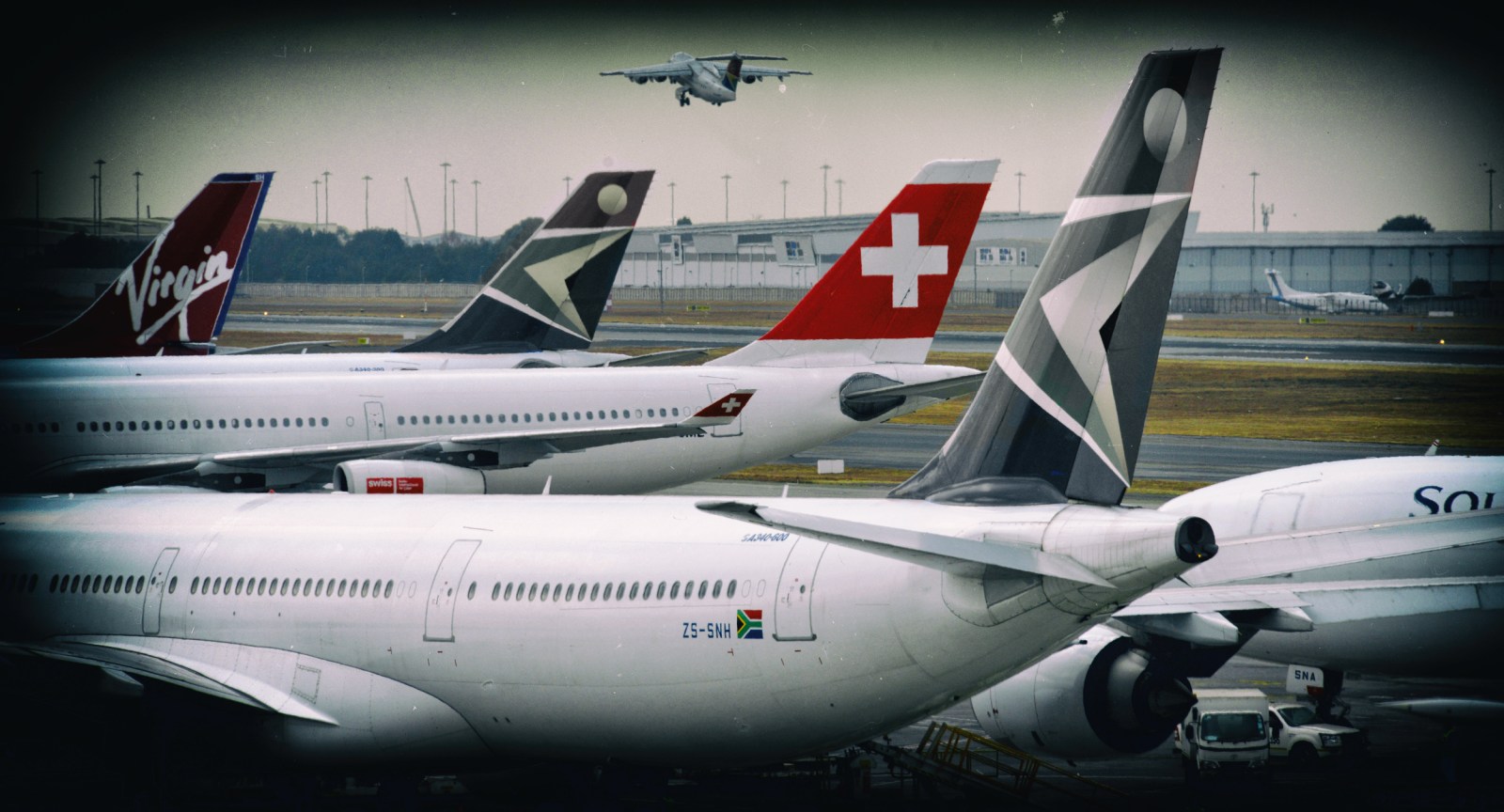 International Relations and Co-operation Minister Naledi Pandor said she was pleased that more than 60 stranded South Africans had returned from Brazil this week and about 300 had returned from Miami on Wednesday while more were expected from the US on Thursday. (Photo: EPA / Udo Weitz)

Official discussions are under way about providing the financially troubled SAA with another R9.2-billion by March 2019, Parliament’s public enterprise committee heard on Tuesday. Such a financial parachute would come within just four months after the R5-billion bailout the National Assembly is expected to approve on Wednesday as a special appropriation. SAA told MPs it actually needed R21.7-billion to stay in the air. And that would have to come from government, according to its approved corporate plan, ‘Shareholder to recapitalise SAA’.

Public Enterprises Minister Pravin Gordhan on Tuesday told MPs he and Finance Minister Tito Mboweni are discussing the R9.2-billion in SAA debt repayments that are coming due in March 2019.

“That (R9.2-billion) is part of the discussions with the Minister of Finance… We’ll get back to you.”

“Get SAA into a better state (otherwise) nobody is going to say I’m interested to invest in SAA,” said Gordhan.

A strategic partner had been considered to avoid what would be an even more bitter pill – the sale of R10-billion worth of government’s Telkom shares. That possibility was mooted in a leaked memo headed “Cabinet Memorandum N17 of 2017” and discussed in August 2017. Selling off SAA, as Mboweni suggested shortly after being sworn in as finance minister, has been dismissed as a possibility.

On Tuesday it emerged SAA has R5-billion in short-term loans maturing in this November 2018. That seems to be related to the loan terms renegotiated in 2017 by then finance minister Malusi Gigaba, who also twice in 2017 used the emergency provision of the Public Finance Management Act (PFMA) under Section 16 to make available to SAA first a bailout of R2.2-billion to repay a Standard Chartered loan and then R3-billion in September 2017 to repay a R1.8-billion CitiBank loan, and provide R1.2-billion in working capital.

Aside from the R5-billion due by SAA in the next three days, the R9.2-billion is needed to repay short-term loans maturing in March 2019, while SAA also said it needed R3.5-billion in working capital in December 2018 and R4-billion from March 2019.

The troubled national airline has none of those required rands and cents available. In fact, more billions are likely to be required to cover losses of R7-billion over the next two financial years, with R5.2-billion in losses expected in the current 2018/19 financial year and another R1.9-billion in the 2019/20 financial year.

“The banks are not as friendly as they used to be. They don’t only want the government guarantees, but also the skills to implement the plan and the political will…”

And two aviation fuel suppliers cut SAA’s payment terms from 21 days to seven, raising exposure, according to its presentation to MPS, while also indicating that “suppliers and partners (are) demanding upfront payment”.

SAA holds the stick over government to pay bailout billions from a tightly stretched national purse. No one quite says it like this, everyone’s just too polite, but the bottom line is if SAA does not get bailouts, then its loan repayments cannot be met. Such a default triggers not only the immediate payment of SAA’s existing R19.1-billion debt leveraged against government guarantees, but also a complex cross-default call-in of debt that would cut across SoEs and would affect also, for example, Eskom’s R350-billion government guaranteed debt. That kind of money is not available, finish and klaar.

It seems the current SAA board and executives have made some gains to stabilise the governance turmoil, even if financial turbulence continues and is set to heighten once the delayed 2016/17 annual report and audited financial statements finally are released.

Key SAA management posts have been filled. According to the prepared presentation to MPs, a stock count has been completed (apparently for the first time in a while). And while the deadline for completing the asset register has been moved back by a year to June 2019, “a service provider has been appointed to count and tag all assets, record them in a register and evaluate the remaining useful life”.

Routes have been rejigged, or canned like one of the flights to London, leaving the remaining flight to Heathrow that’s turning a profit. Line items have been scoured to achieve a R400-million savings from human resources, and there’s an almost R500-million saving in the making in the procurement field.

On the back of four forensic reports, at least five employees have been dismissed, 21 were given final written warnings and two employees resigned. SAA CEO Vuyani Jarana told MPs it was important to have the human resources steps resolved before taking cases to civil litigation to recoup lost monies, or to lay criminal charges.

But the bottom line remains: because of the financial turmoil, SAA is not a going concern – effectively it’s bankrupt – and the only reason the national airline has not been grounded is because of government guarantees.

And that’s been the case for well over a year. In August 2017 SAA board member for audit and risk Akhter Moosa told Parliament’s public spending watchdog, the Standing Committee on Public Accounts (Scopa), the national airline had “negative equity” of R12.2-billion as of March 2017.

“So it (SAA) has no funds to operate. So it has to go for some support from the shareholder (government).”

Gordhan on Tuesday told MPs SAA was “a casualty of corruption”, much in the line of the broader phenomenon of how State Capture had also affected other institutions and State-owned Enterprises (SoEs), like Eskom and Transnet.

With a pliant minister, board and executives, procurement became the focus of facilitated capture. And in that process core business is affected and revenue negatively impacted. For example, at SAA Technical, the maintenance wing, this meant an inflation of between 30% to 40% due to middle men in the overall expenditure of R3.4-billion.

And the minister paid tribute to the SAA board and executives for cleaning up.

“Talking about numbers is easy, but on the ground it takes a lot of courage to stop what’s been going on.”

Gordhan, who attached the phrase “connecting the dots” to the networks of State Capture, has found himself targeted in an EFF campaign that has labelled him “dog of white monopoly capital” during last week’s EFF protest outside the Zondo Commission of Inquiry into State Capture as Gordhan was testifying. And on Tuesday EFF leader Julius Malema laid charges of fraud and corruption against Gordhan, including for having a bank account in Canada, although that allegation was dismissed by Gordhan while under oath at the Zondo commission.

The public enterprises ministry has dismissed this latest EFF move, a day after Gordhan approached the Equality Court, and laid crimen injuria charges.

“Their (the EFF’s) so-called “charge sheet’ is baseless, containing a set of lies, fake news and fabrications. It is simply their latest attack on the continuing efforts to combat corruption and theft in State-owned Companies and other public institutions.”

What any of this may mean for SAA, which falls under Gordhan’s political portfolio, as do Eskom, Transnet and Denel, three SoEs that have found themselves at the heart of State Capture, remains to be seen. But what has become clear is that the national airline, despite its quite insistence that it will need no less than R21.7-billion to stay in the air, is putting on a good spin to claim progress.

Whether it was the briefing to MPs of the appropriations committee last week, or Tuesday’s interaction with the public enterprises committee, the positive spin narrative SAA has adopted is “Flying out of the Thunderstorm”.

The only problem? As DA MP Alf Lees identified, and confirmed by an independent aviation expert Daily Maverick approached, the “Flying out of the Thunderstorm” presentation cover page depicts a plane taking off into the stormclouds and lightning – rather than heading out of the turbulence. DM