Amid the Brexit high drama, SA and the EU chiefs talk up trade 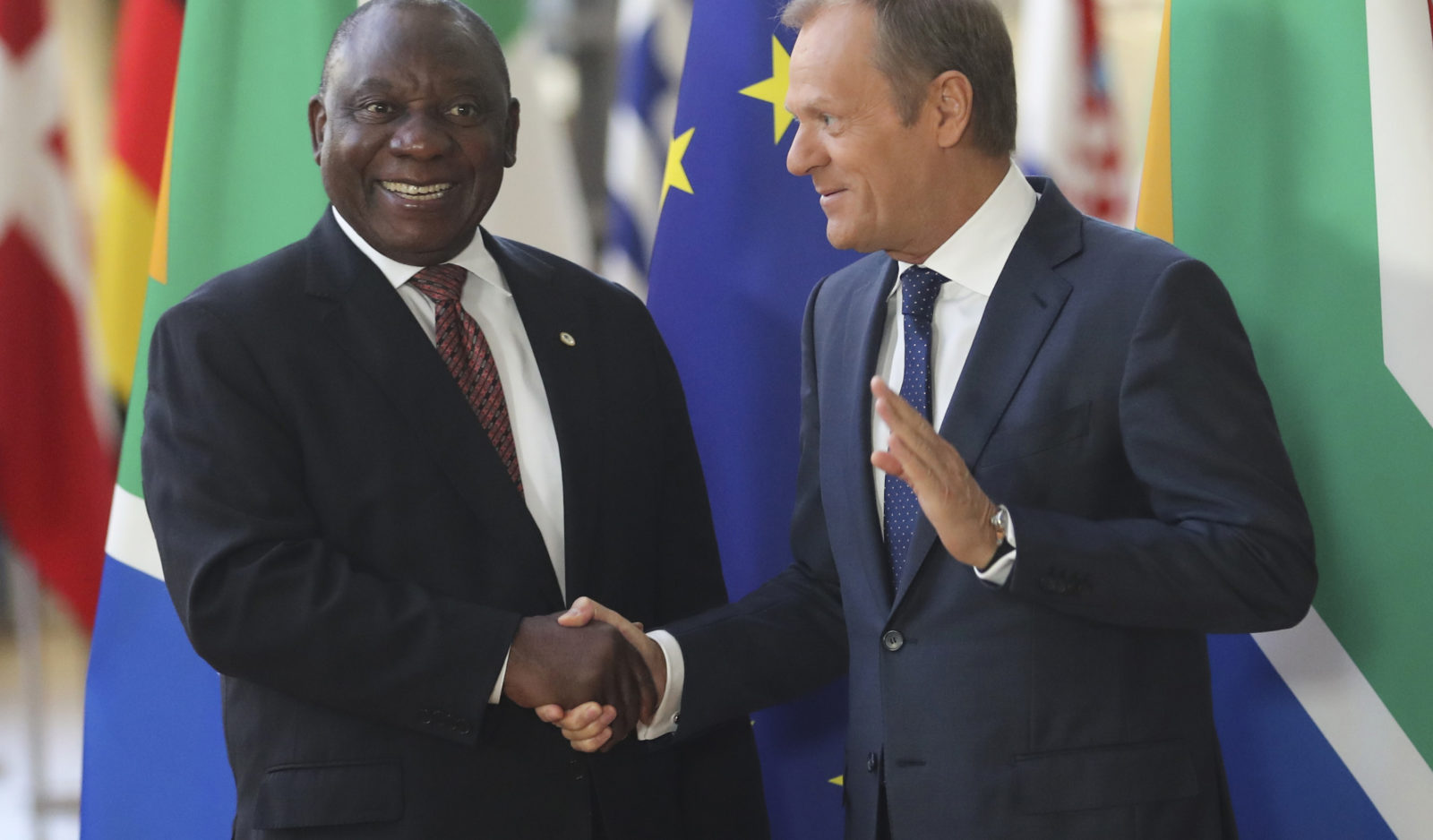 It’s been five years since the last summit between South Africa and the European Union, and it happened to coincide with a day of high drama in Brussels over Brexit negotiations. Amid all this uncertainty there is hope of finding a more equal partnership.

Jean-Claude Juncker looked relaxed – and perhaps a little relieved to be dealing with a good news story for a few hours – on what might have been one of the more unpleasant days during his tenure so far as President of the European Commission.

Switching from French to English, perhaps so that President Cyril Ramaphosa could understand without the help of an interpreter, he said at a press conference following the summit between South Africa and the European Union on Thursday:

“I don’t hope that the next summit between South Africa and the European Union will take another five years. That was a major mistake, I don’t know who is responsible for that. If it was [up] to me, the next summit will take place next Friday morning 11 o’clock!”

Thursday was a day that started with an 8.30am press conference about the draft Brexit deal reached between the EU and British negotiators the day before. The South Africa-EU press conference happened at lunch time, and by that time several of British Prime Minister Theresa May’s ministers had resigned because of unhappiness with the deal.

As high-level delegations from South Africa and the European Union gathered behind closed doors on the fifth floor of the European Council building, Ramaphosa took Juncker by surprise by asking him what he’d do about this Brexit thing if he were in May’s shoes – a kind of role play tactic Ramaphosa must have employed often when he was on the ANC’s team during the Codesa negotiations for a new constitutional order just over two decades before. South Africa subsequently exported some of its negotiation tools to other troubled regions, like Ireland, and under Nelson Mandela its Bill of Rights became an example to the rest of the world.

Ramaphosa had made much of Mandela’s legacy when he spoke to the European Parliament in Strasbourg the day before, and as Europe moves into an uncertain future, a partnership with South Africa could just help remind it of these shared values.

The “reboot” of the relationship with the European Union comes as South Africa is emerging from what Ramaphosa likes to call “difficult times”, mostly referring to former president Jacob Zuma’s final term in office which was dominated by State Capture and corruption allegations.

Ramaphosa’s administration started reaching out after he took over in February, partly driven by a will to attract $100-billion in foreign investment to get South Africa’s economy going again. The compact size of his delegation, consisting only of finance minister Tito Mboweni and trade and industry minister Rob Davies, clearly pointed to a business-mindedness.

Mboweni, incidentally, was relishing his return to Brussels, remarking to leaders that the last time he was there for government business, it was to plead for sanctions against the apartheid regime. This time he asked for the opposite, on behalf of Zimbabwe’s new president Emmerson Mnangagwa.

Ramaphosa felt as strongly on the subject.

“We called on the EU to lift whatever sanctions they still have in Zimbabwe, because it is on a path of great reforms, and we insisted this should be supported as Zimbabwe has turned a wonderful corner,” Ramaphosa said.

Ramaphosa described Thursday’s summit as “historic”, saying, “South Africa felt we have a friend and ally in the European Union.”

At the summit the two sides agreed to stand together on issues such as support for a rules-based multilateral trading system, partnerships on migration, climate change, security and defence, as well as issues of trade and investment.

There was also the concern over Brexit, but until a clear agreement is reached, it’s hard to say what the consequences would be for South Africa. It could, for instance, affect the local Ford car manufacturing plant’s ability to sell cars in Europe manufactured in South Africa with engines from the United Kingdom.

President of the European Council, Donald Tusk, said the topic of Brexit did arise during the summit.

“South Africa, like all our international partners, is concerned by Brexit. We updated President Ramaphosa on the state of play of negotiations, and assured him that the EU will do its utmost to keep partner countries informed and to reduce the negative impact of the Brexit process.”

Tusk predictably also got a question from journalists on Brexit, but said it was not for him to comment on the developments in London, but that the EU was prepared for even a no-deal scenario, should that happen.

Ramaphosa said South Africa was reassured that the impact of Brexit on South Africa “should not be negative”, and that the country would like to enhance its trade both with EU countries and the United Kingdom.

It’s not only the issue of Brexit that has created uncertainty in Europe. The next elections on the continent in May could coincide with South Africa’s general elections and could throw up a few surprises due to the recent rise of right-wing sentiments in countries such as Spain, Poland and Hungary. EU countries are increasingly polarised on human rights issues with the re-emergence of nationalism.

Many in the EU would like to see relationships with South Africa – one of 10 countries in the world with which it has a strategic partnership – and Africa cemented before a possible change for the worst. Juncker, for one, recently put forward an Africa-Europe Alliance for Sustainable Development and Jobs as one of the ways to bring the two continents closer in trade.

Europe is South Africa’s biggest partner in trade and investment, with Ramaphosa pointing out that trade had increased fourfold in the past two decades. Further, more than 2,000 European-based companies operate in South Africa, and they have some of the biggest productive investments here.

In a time when more of the big powers are vying to do business in and with Africa, South Africa has more choice and opportunities to choose and to establish equal relations. Davies said in an interview after the summit: “We don’t want to back one master over the other. We don’t want masters!”

Juncker himself said “we would like to forge the type of relationship, not based on condescension, but we want to share ideas and steer a way to move forward to establish a well-balanced relationship”.

He said South Africa and the EU both have the same motto of “unity in diversity”, which could help them move forward together.

Uncertain times and a changing world order could help enable a more equal partnership between the two out of necessity. DM