Glynnis Breytenbach: Decision to withdraw from ‘dream job’ made easier due to other competent candidates 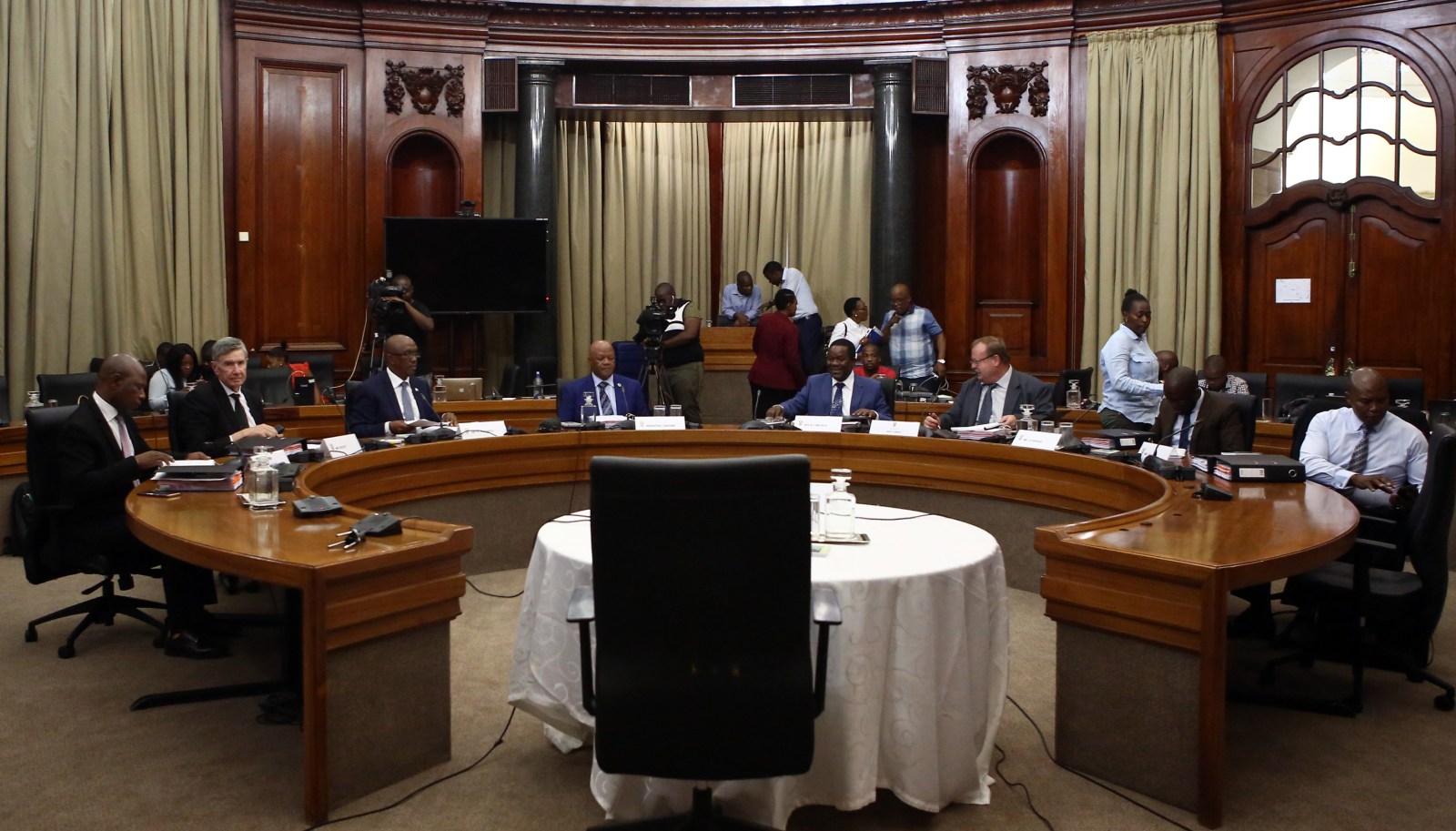 The panel waits to interview candidates for the position of National Director of Public Prosecutions at the Union Buildings on November 14, 2018 in Pretoria, South Africa. The interviews are conducted by an advisory panel led by Minister of Energy Jeff Radebe. (Photo by Gallo Images / Phill Magakoe)

DA MP Glynnis Breytenbach is staying put in Parliament. Speaking at a media briefing on Wednesday while interviews of the new national director of public prosecutions (NDPP) were under way – for the first time ever in public – Breytenbach said her decision to withdraw from the shortlist came because “I cannot escape the perception I am a politician” and right now the NPA has to get rid of the toxic politicisation that has bedevilled it.

DA MP Glynnis Breytenbach, a former state prosecutor, was nominated by the Pretoria Bar as one of the 12 candidates ultimately shortlisted by a panel constituted by President Cyril Ramaphosa. And although she accepted the nomination to the shortlist, a series of discussions within the party unfolded, and Breytenbach decided to withdraw in the best interest of the National Prosecuting Authority (NPA).

“I can’t escape the perception I am a politician and I’ll bring that perception to the job. I don’t believe that is in the best interest of the prosecution service. This isn’t about an individual, this is about fixing an institution,” said Breytenbach on Wednesday, adding that the NDPP needed be seen as “fiercely independent” and someone who would “right the wrongs and do away with toxic politicisation” of the prosecution services.

Withdrawing from the interviews had been “made easier’ because of other “really competent people on the list”, she added. And when asked about those competent people for NDPP Breytenbach cited Advocate Shamila Batohi – she was the lead prosecutor in the 2000 commission of inquiry into cricket match fixing involving then Proteas captain Hansie Conje, and has more recently worked at the International Criminal Court in The Hague – current Western Cape Director of Public Prosecutions Rodney de Kock and Siyabulela Mapoma, a prosecutor who joined Transnet a decade or so ago.

And no, she’s not disappointed. “It’s a dream job, but I enjoy the job I have now,” Breytenbach said as DA leader Mmusi Maimane earlier had given her his full endorsement as justice minister in a DA government.

The NDPP interviews from Wednesday to Friday at the Union Buildings have been opened for the first time in democratic South Africa after a landmark court ruling following an application by the activist organisation, the Right2Know Campaign (R2K).

Among the first to face the questions on Wednesday morning, was Mapoma and also current acting NDPP Silas Ramaite, the deputy who had had repeated acting stints amid the revolving door of prosecution bosses.

The post at the helm of the NPA has been a poisoned chalice – not a single national prosecutions boss in democratic South Africa has served a full 10-year term.

Bulelani Ngcuka, the first NDPP appointed in 1998 after the legislation changed, lasted until July 2004. He resigned in the wake of the political push back, including claims he was an apartheid spy that were dismissed by the Hefer commission of inquiry, over his statement that while there was a case for corruption against then deputy president Jacob Zuma, there would be no prosecution because of uncertainty whether it was a winnable case.

Or as he was quoted at the time in August 2003: “We have concluded that, while there is a prima faciecase of corruption against the deputy president, our prospects of success are not strong enough,” said Ngcuka, according to news reports at the time. “That means that we are not sure if we have a winnable case. Accordingly, we have decided not to prosecute the deputy president.”

Vusi Pikoli was appointed in 2005. When Pikoli pushed for the fraud prosecution of Jackie Selebi, the former national police commissioner, he fell foul of the political winds and was suspended by then president Thabo Mbeki, who had for a long time regarded Selebi as a key ally in the factional winds in the run up to the 2007 Polokwane ANC national conference.

Pikoli was cleared by the Ginwala Commission of Inquiry by November 2008, but never reinstated which he challenged in court. In November 2009 there was a R7.5-million out of court settlement with then president Kgalema Motlanthe that saw Pikoli walk away. In 2014 he became the Western Cape’s first police ombud, and now is adviser in the State Security ministry. By the time Pikoli was out of the NDPP job, so was Mbeki, who in September 2008 abided by the ANC National Executive Committee (NEC) decision to recall him, while Selebi went on trial that resulted in his 2010 conviction and 15-year jail term for corruption.

Mokotedi Mpshe was appointed acting NDPP, and then in April 2009 made the controversial decision to withdraw over 700 fraud, corruption and other charges against Zuma on the eve the elections that brought him to the Union Buildings. For the next eight and more years, the DA fought to review Mpshe’s decision to drop the charges on the strength of the so-called spy tapes, transcripts of telephone calls between Ngcuka and his deputy Leonard McCarthy, that the NDPP said indicated prosecutorial prejudice. The DA won, repeatedly, and in October 2017 it was clear the NPA would have to reconsider those counts. In March 2018 then NDPP Shaun Abrahams decided to reinstitute 16 counts involving 783 incidents of fraud, corruption and racketeering.

In 2009 Menzi Simelane became then president Jacob Zuma’s first NDPP appointment. The DA almost from the word go opposed this; Simelane was appointed despite questions over his conduct and adverse findings about his conduct by the Ginwala inquiry. The matter went to court, and after the Supreme Court of Appeal in December 2011 ruled Simelane’s appointment as invalid, he was suspended.

However, Simelane only departed office following a unanimous Constitutional Court judgment delivered by Judge Zac Yacoob in October 2012 that ruled his appointment as “irrational” because it was not just due to the subjective opinion of the president, but needed to meet objective and rational standards. Simelane’s appointment did not do so as it had not taken account of existing accounts of dishonesty and thus was “inconsistent with the purpose of appointing, as NDPP, a fit and proper person with due regard to his conscientiousness and integrity”.

After almost a year with Nomgcobo Jiba at the helm of the NPA in an acting capacity, in August 2013, Zuma appointed Mxolisi Nxasana, a practising attorney from Durban, as the boss of the NPA. By then the prosecution services were deeply politicised and drawn into the factional battles of the ANC, with Deputy NDPP Jiba and special director of public prosecutions Lawrence Mrewebi reportedly at the forefront.

Nxasana lasted some 22 months and, amid an inquiry into his fitness for office which he said was based on a smear campaign against him, he resigned by June 2015. There had been a settlement, including a R17-million payout.

Then Shaun Abrahams, a career prosecutor, was appointed by Zuma to head the NPA.

This was challenged in court by the Council for the Advancement of the South African Constitution (Casac), Corruption Watch and Freedom under Law.

And Freedom Under Law also brought court action that in 2017 successfully ordered Zuma to hold inquiries into their conduct, in the wake of several judgments highly critical of particularly Jiba’s conduct. A swathe of litigation and counter suits unfolded, including debarment of Jiba and Mrwebi, but ultimately both were suspended in October 2018 pending inquiries into their fitness for office, according to a statement from the presidency.

Abrahams’s appointment as NDPP was set aside by the Pretoria High Court in December 2017. That decision was confirmed by the Constitutional Court in August 2018 when Judge Mbuyiseli Madlanga found Nxasana’s departure from office was “inconsistent with the Constitution”, and therefore invalid – also making Abrahams’ appointment invalid.

It’s complicated and fraught amid deep divisions in the NPA that has haemorrhaged skills and talent. It will not be healed overnight although it is a must to restore institutional integrity.

Whoever Ramaphosa selects from the final three nominations for NDPP to head the prosecution services following the public interviews, will have his, or her, task cut out for them. DM