Opposition fisticuffs and racial epithets as Ramaphosa lays down anti-corruption line, even for his kin 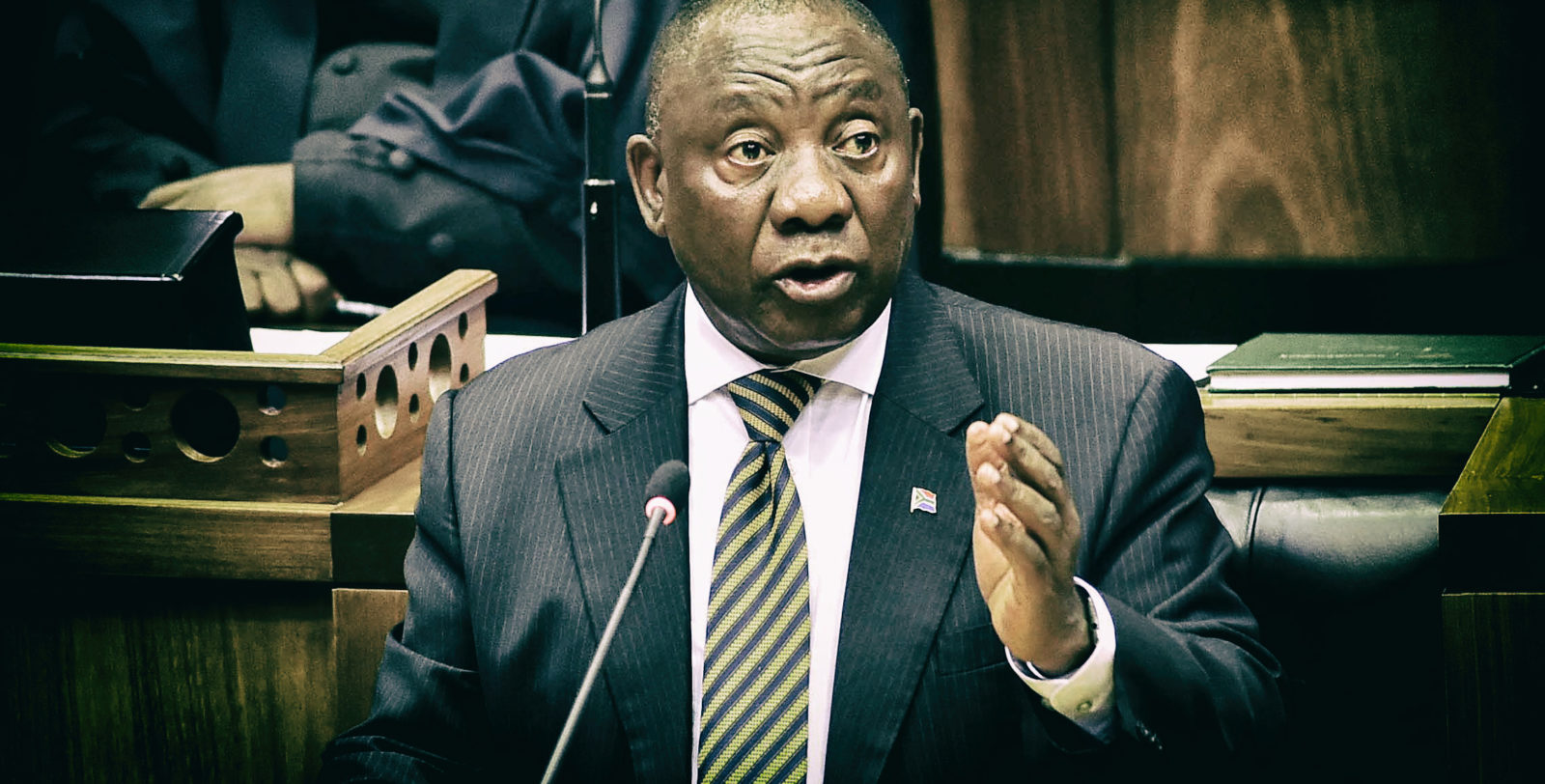 President Cyril Ramaphosa responds to the debate on the Presidency Budget Vote) in the National Assembly, Parliament, Cape Town today, 24 May 2018.

President Cyril Ramaphosa said he’d take his son to the police himself if he were involved in unlawful or corrupt dealings. Speaking during his final 2018 question slot in the House on Tuesday, Ramaphosa said he had asked his son Andile ‘at close range’ about a R500,000 payment from Bosasa – the company has several government contracts – and was told it was for advisory consultancy services. DA leader Mmusi Maimane snuck in this question in a clear but unsuccessful attempt to unsettle Ramaphosa. And the president showed his political craftiness by turning scenes of chaos on the opposition into a message of social cohesion.

The ANC parliamentary caucus was scheduled as a “special” meeting – the usual slot for party-political caucuses in Parliament is Thursday morning – and that got tongues wagging. But in the end, it seemed largely about elections, deepening unity and renewal, the two themes that had emerged a few days earlier at the special National Executive Committee (NEC), on which the ANC parliamentary caucus also was briefed. There would be no more secret meetings, and meetings with lobbying groups, including business, would be fully reported back on and accounted for.

“We must be mindful that to steam ahead with our programme of radical socio-economic transformation, we must strive to maintain and grow our parliamentary majority. Our efforts to advance unity and renewal as well as consensus building remains firmly on course,” said Magashule.

The Gigaba debacle was not discussed, it was officially confirmed, but the VBS Mutual Bank saga was.

Magashule confirmed the ANC position that “anyone found guilty of wrongdoing must face the wrath of the law”, and reiterated ANC Treasurer-General Paul Mashatile’s undertaking that the party would repay any monies it may have received. The weekend special NEC has commended the ANC integrity commission for work done also in regards to the involvement of members in the VBS saga, and that work was being finalised, secretary-general Ace Magashule added.

Some 90 minutes later Ramaphosa, as president of the country, was at the podium in the National Assembly answering questions on VBS, which DA leader Mmusi Maimane had urgently requested to be included.

Did the president know of the looting and corruption at VBS, asked Maimane. And Ramaphosa said that shortly after becoming president he had been briefed by various departments about various matters, including by the National Treasury on VBS “where I was alerted to alleged corruption”. A follow-up briefing was requested and Ramaphosa said he was taken through the South African Reserve Bank (SARB) commissioned report by Advocate Terry Motau, “The Great Bank Heist”, before it was made public.

Ramaphosa segued into how a “deeply disturbing picture of theft and corruption of a massive scale” had emerged in that report and how “all those responsible must be held accountable”, including municipal and political officials.

“We insist all relevant institutions must act swiftly to prosecute those responsible, but also move with greater speed to recover the money stolen.”

At the end of the presidential question, according to parliamentary protocol and practice, it was Maimane’s turn for a first follow-up question: And did the president know about his own son Andile Ramaphosa getting R500,000 from Bosasa?

“We can’t have family members benefit (from unlawful dealings). Bring our nation into your confidence, set the record straight.”

“This matter was brought to my attention. I proceeded to ask my son what this was all about… This payment I can assure you, Mr Maimane, I asked him at close range whether this was money that was unlawfully (obtained). This was a service that was provided. He showed me a contract…. He is running a clear and honest business as an advisory service,” said Ramaphosa.

“I had no inkling whatsoever. If it turns out that there is any illegality and corruption… I will be the first, absolutely the first, that he becomes accountable. Even if it means I am the one who takes him to the police station.”

Ramaphosa went on to say he had told all his children they could not do business with State-owned Enterprises (SoEs) or government departments. “… (A)s their father, if there is any illegality, any corruption, I will be the first one to take them to jail even.”

And the presidential Q&A moved on. Even as it was proceeding in the House, Maimane quickly followed up with an official media statement.

Ramaphosa’s answer in the House had raised more questions, including what sort of consultancy services his son Andile Ramaphosa provided for Bosasa.

“Bosasa has secured several lucrative contracts with government departments and entities – including the Departments of Justice, Correctional Services and Airports Company South Africa – worth over R10-billion over the next decade,” Maimane said in the statement.

“For the ANC, rich and connected ‘insiders’ continue to unfairly benefit at the expense of poor and unemployed ‘outsiders’. Jacob Zuma’s family and children benefited corruptly from his presidency. We cannot continue down this path in the Ramaphosa presidency. We will continue to seek transparency and accountability from connected politicians and their families.”

One takeout from what could be seen as a sneaked in question involving the president’s son – follow-up questions are limited to the subject at hand, but on Tuesday the ANC benches, usually sharp to raise points of order, remained quiet – is that dishing dirt on the president is a DA electioneering issue, and 2019 is a crucial election year.

It worked with the scandal-ridden former president Jacob Zuma and his administration. The change of leadership at the top of the governing ANC and government has thrown up some challenges for opposition parties used to having a rather easy political target.

But the DA’s manoeuvre was tone deaf, and the opposition party found itself alone in its drive. The point made regarding Andile Ramaphosa’s half a million rand payment did not even excite the EFF, whose “Pay back the Money” chant, and legal action, has become political shorthand for the drive to hold Zuma accountable.

Such chaotic scenes have not been seen in the House this year. Order was restored, but when Agang-SA MP Andries Tlouamma raised a point of order on not allowing racial insults to stand, the EFF heckled. A “f*** you” from Tlouamma got EFF MP Nazier Paulsen jumping from his seat and bashing the Agang-SA MP.

Although the bouncers were called in, it took a while. Fellow MPs had separated the sparring parties. Both were ordered out of the House. A visibly furious United Democratic Movement (UDM) Chief Whip Nqabayomzi Kwankwa took exception to the EFF, saying. “We can’t allow ourselves to be intimidated.” IFP leader Mangosuthu Buthelezi later made a similar point.

But Malema clinched the last word on a point of order: “I will never subject myself to whiteness and whiteness must be called out… If there is a punishment for that I will take it.”

Presiding House Chairperson Thoko Didiza shut it down, saying she’d rule on Wednesday on the plethora of rules that had just been broken.

Presidential question time continued and Ramaphosa, who looked grim – “I’m rather sad and taken aback and almost handicapped by what has happened just now…” he said – showed his political craftsmanship. He went on to ad lib on his final question on social cohesion to address the ugly scene in the House.

“The project of building a non-racial society is a historical task. It is not a task we can move away from. South Africa characterises itself as a non-racial democracy,” Ramaphosa said.

“There should never be a time and opportunity where we see each other as black, white… and insult each other. We are South Africans and it defines us.”

South Africa had overcome a “horrible past” of apartheid and created a way forward.

“We cannot go back to that horrible past we have had and however painful it may be…. We cannot revert to raw racism and separation.

“We are one people and we are forged as one nation with one future,” said Ramaphosa at the end of what was a roller coaster ride in Parliament. DM