The deep pain of women heard out loud at summit 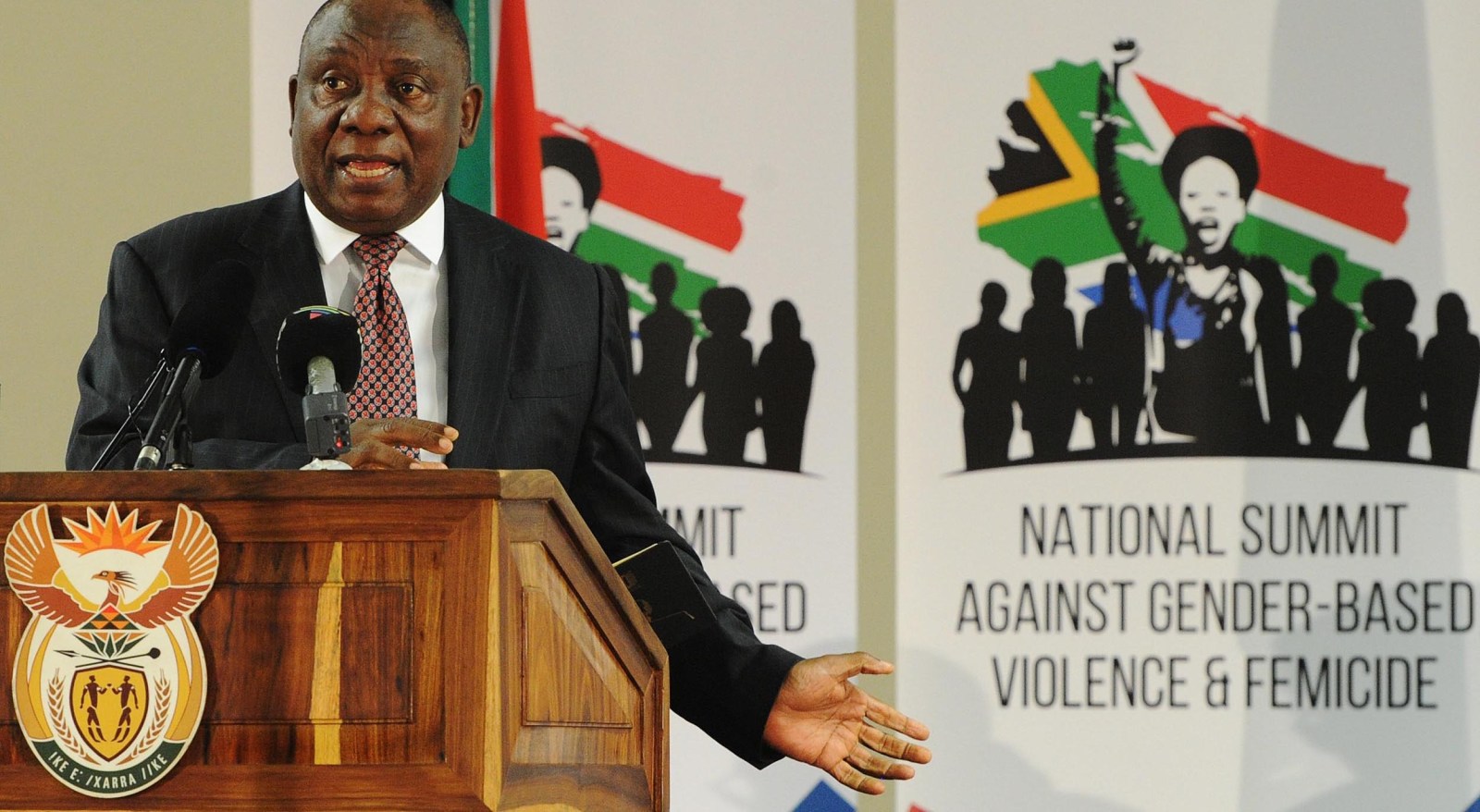 It has been exactly three months since the #TotalShutdown march, when on 1 August, women took to the streets across the country demanding an end to gender-based violence and an audience with President Cyril Ramaphosa at the Union Buildings. With just one of their 24 demands met, that being the convening of the Gender-Based Violence Summit, civil society activists questioned if there was enough political will to meet the rest of the 23 demands.

How many centimetres long is the political will to end the scourge of violence against women and gender non-conforming persons, asked #TotalShutDown activist, Nyiko Shikwambane at the Gender-Based Violence and Femicide Summit held at Saint George Hotel in Centurion on Thursday.

Shikwambane, representing civil society at the summit, asked if government was committed to meet the rest of the other demands and “commit patriarchal suicide” by prioritising and funding departments that work in the gender violence space.

When Minister of Social Development, Susan Shabangu opened the summit, she noted the significance of hosting it on the same day of the Dros rape case and the challenges South Africa still faces.

According to Shabangu, we are at a point where gender violence has become unbearable in the country. And because of the #Totashutdown movement, this issue has been brought to the forefront.

“With all the good laws we have passed since 1994 why are we still in this place today?” asked Shabangu.

“In a country where women continue to be abused, with daily reports in the newspapers of women raped and of psychological, physical and economic abuse. And although we live in democratic space, we have to ask ourselves if women enjoy the same democracy,” she said.

Over the next few days, the summit will debate and discuss mechanisms and practical solutions to end gender-based violence.

Since 2014 to date there have been a total of 117,811 sexual offences against women and children reported, said Minister of Justice and correctional service, Michael Masutha.

And besides a slight drop in 2016/17 there has never been a significant reduction in the number of sexual offences cases in the country.

And to “illustrate the gravity of the crisis”, said Masutha, more than half of the total reported cases, that is 67,342, “were offences committed against children”.

Since the National Prosecuting Authority decided to record the stats of femicide last year in the 2017/18 financial year, a total of 79 femicide convictions were made, representing a conviction rate of 98.8%, with only one acquittal.

Masutha said 28 cases were finalised in the first quarter of this financial year, with 27 convictions obtained, representing a conviction rate of 96.4%.

“One of the notable and deeply concerning aspect of the incidents of sexual abuse in this country is that they occur among family members, friends and acquaintances,” said Masutha.

Therefore the approach of the summit in discussing gender-based violence must “appreciate the multiple dimension of the scourge” the country is facing.

While the statistics point to a “deep social malice”, to find a lasting solution to the crisis it would be prudent to do a thorough examination of the multiple casualties.

Fundamental questions needed to be asked, Masutha said, and these included:

For Shikwambane, South Africa is made of colonial institutions which can never understand the “positionality” of women and gender-non conforming individuals.

She added that the #Totalshutdown movement is a space where women have created a language and a culture for themselves of solidarity through movement building, a space where government can learn how to address these social ills.

Some of the other demands that were made at the summit include the call for:

Different women spoke about their experiences at the hands of men and the trauma it had caused in their lives.

At several points attendees shouted for the release of Martha Marumo, a woman who was is serving a sentence at Kgosi Mampuru Prison for killing her abusive husband who had beaten her while she was pregnant.

Ramaphosa, after listening to the testimonies emphasised government’s commitment to respond the crisis that was tearing South Africa apart.

At this point activists in the room stood in silence holding torn underwear painted red to represent blood. They remained standing for Ramaphosa’s entire address.

“Survivors of sexual violence and abuse, often live with these scars for a very long time. And when abuse occurs in a situation of trust, whether in the family or church, the sense of betraying is indeed intensified,” said Ramaphosa.

Ramaphosa admitted that the criticism was correct that he hosts too many summits, but stressed their importance in nation-building and finding solutions to some of the country’s most intractable problems.

“These summits give us an opportunity to talk and listen to one another, and listen to the stories of the women who sat here and quietly told their stories in a harrowing way and related the deep pain that they face and how their lives have been shattered at the hands of men.

“This is a scourge that we can never say that it is okay if we have just a little bit. And this summit therefore gives us the opportunity, the tools, the moment of reflection, of discussion, and of coming up with solutions to end GBV,” said Ramaphosa. DM