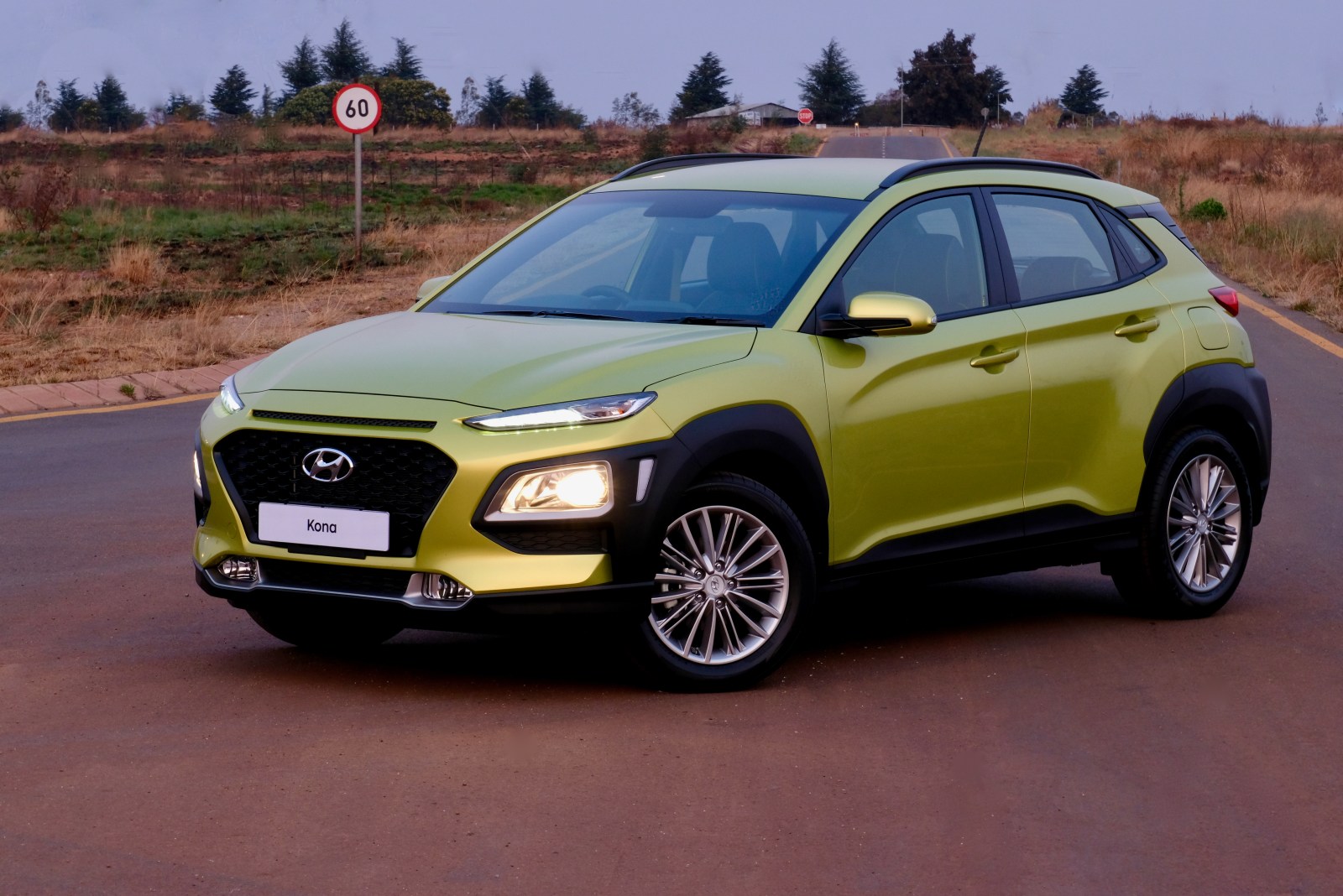 Just why a Korean crossover should be named after the home of Ironman on Hawaii’s Big Island isn’t obvious. But it is true that the Hyundai Kona is arguably the marque’s most adventurous model to date – and one of its most appealing.

Ironman, the global athletic phenomenon that stretches the boundaries of human endurance to extreme levels, was born in Kona, where the World Ironman Championship has been held for the past 40 years. 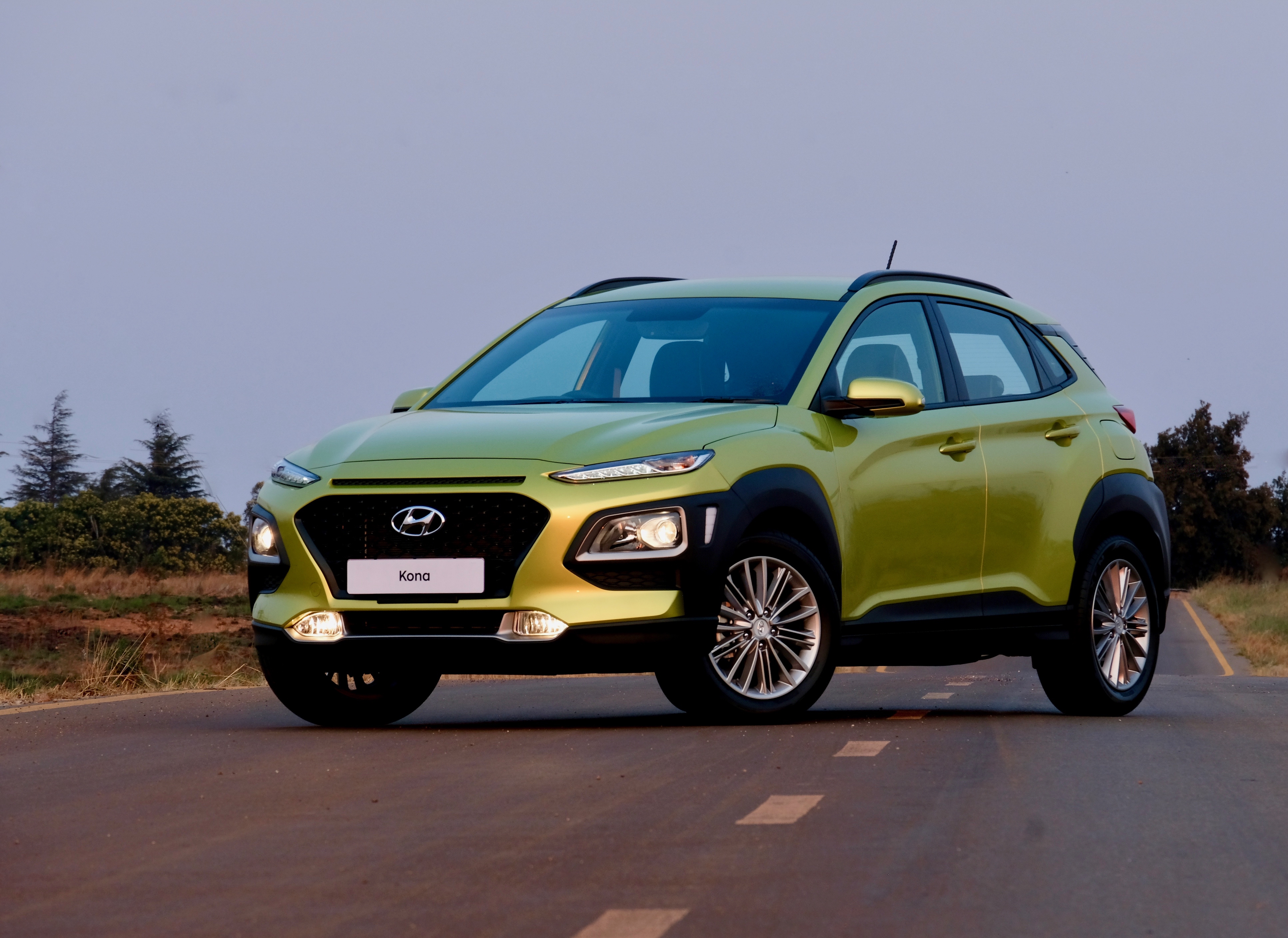 While athletes have to rely on their own stamina to traverse the swimming, cycling and running legs, the new Hyundai Kona promises to transport you from point to point in far greater comfort and style, with almost zero effort required.

The most extreme aspect of the Kona crossover is the adventurous Acid Yellow colour scheme on offer – more of a mamba green, in South African terms, but a hue that suits the compact machine’s fresh and cheeky image to a tee.

It’s also available in more conventional tones – think silver, white, red and gunmetal grey – but even those more muted colours don’t detract from a vehicle that impresses on most levels, despite competing in a crowded segment. 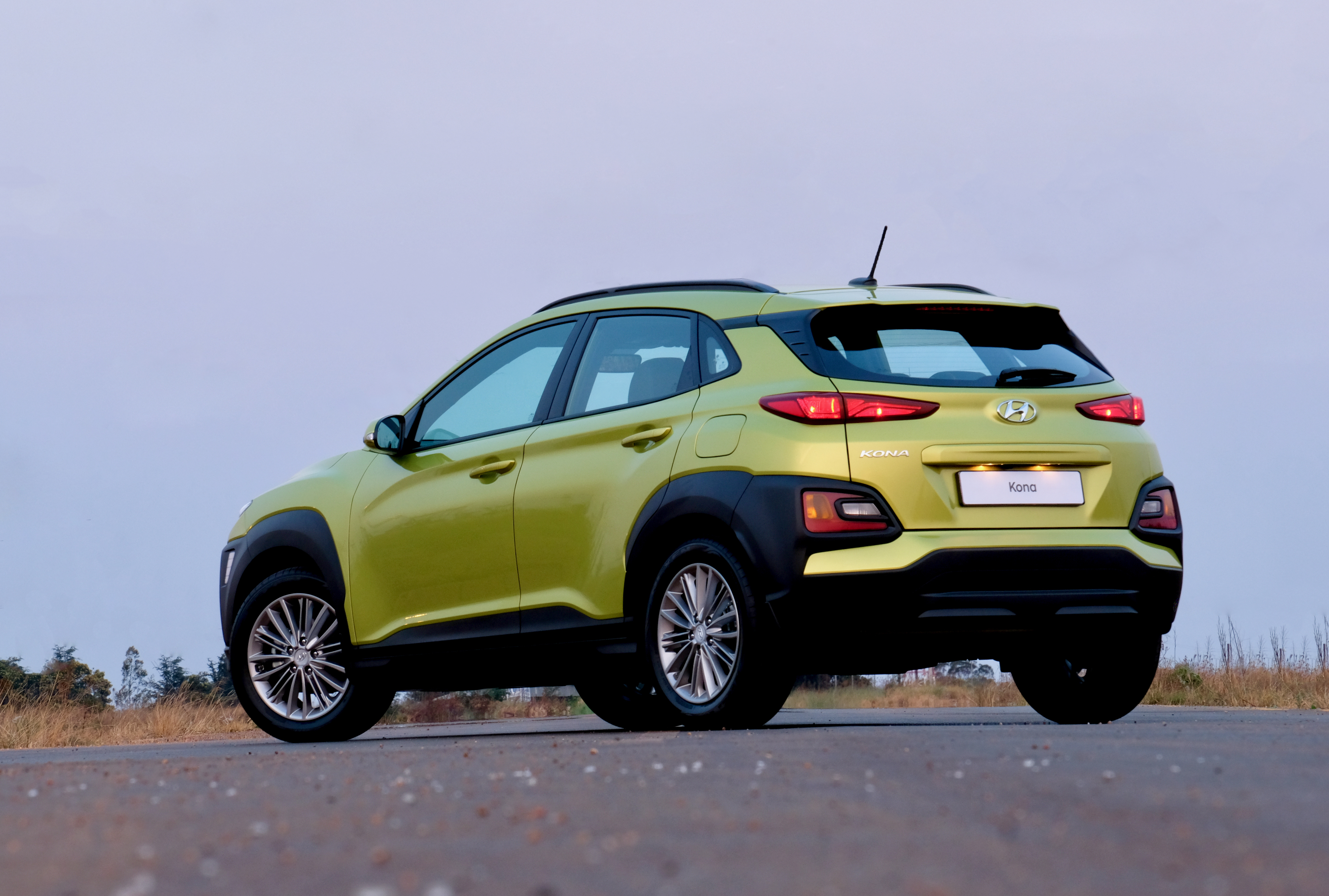 In all fairness, Hyundai has built its reputation on vehicles offering honest value and solid reliability – virtues that are as admirable as they are pragmatic, especially when times are tough and budgets are tight.

But there hasn’t been anything in Hyundai’s model arsenal to get the pulse beating quicker. The Kona hopes to change that.

The newcomer is more crossover than SUV, although it draws its inspiration from both segments. And to be honest, the line between the two is a thin one at best.

Thus, the Kona features the raised ride height, the roof rails and the rugged protective mouldings you’d expect of a softroader. But it links those to a wide, planted stance and the muscular haunches of a sporty hatchback. 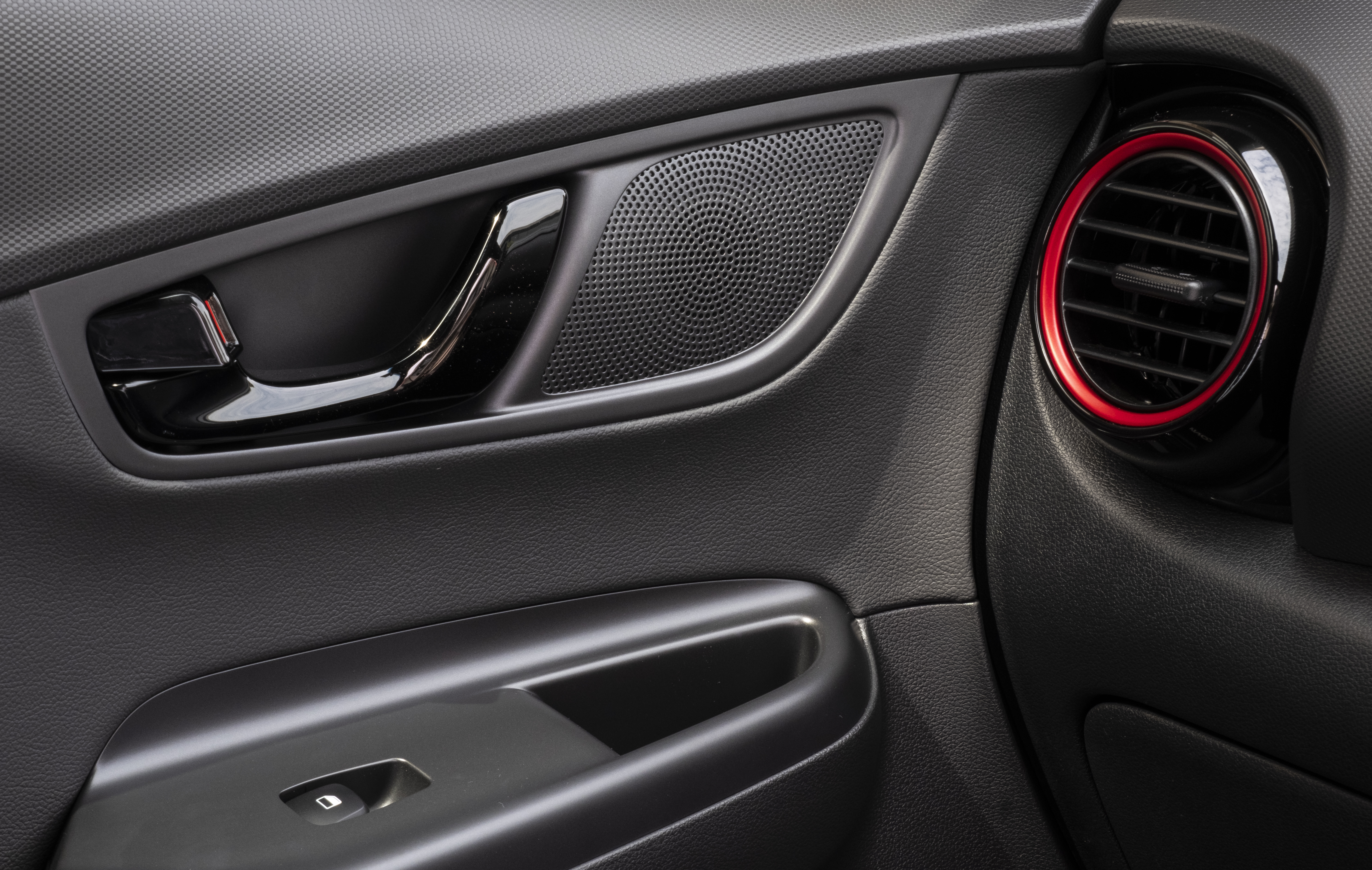 So, crossover is perhaps the best description for a car that straddles both urban runabout and weekend warrior roles – at least in visual terms.

But what really sets the Kona apart from its rivals is the attention to design detail. The front end shows off a daring approach quite at odds with Hyundai’s usual conservative commitment to convention. 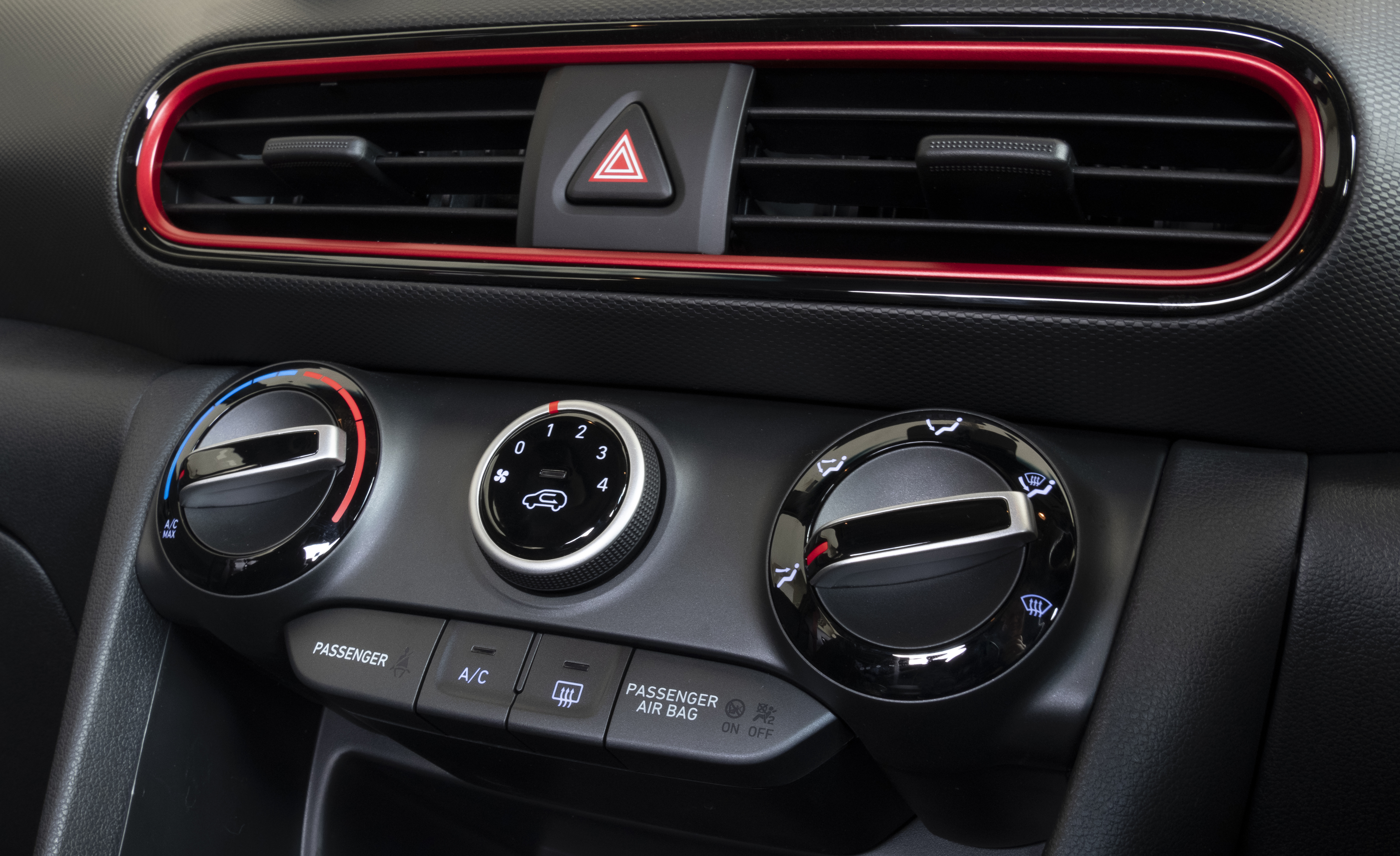 The hexagonal grille is typical Hyundai, although larger here than usual. But the headlight treatment is unashamedly adventurous.

Slimline daytime running lights appear as slashes of brightness at the bonnet’s leading edge, while neatly integrating the turn indicators. The main halogen headlight element is housed much lower, in a moulded recess on either side of the grille. 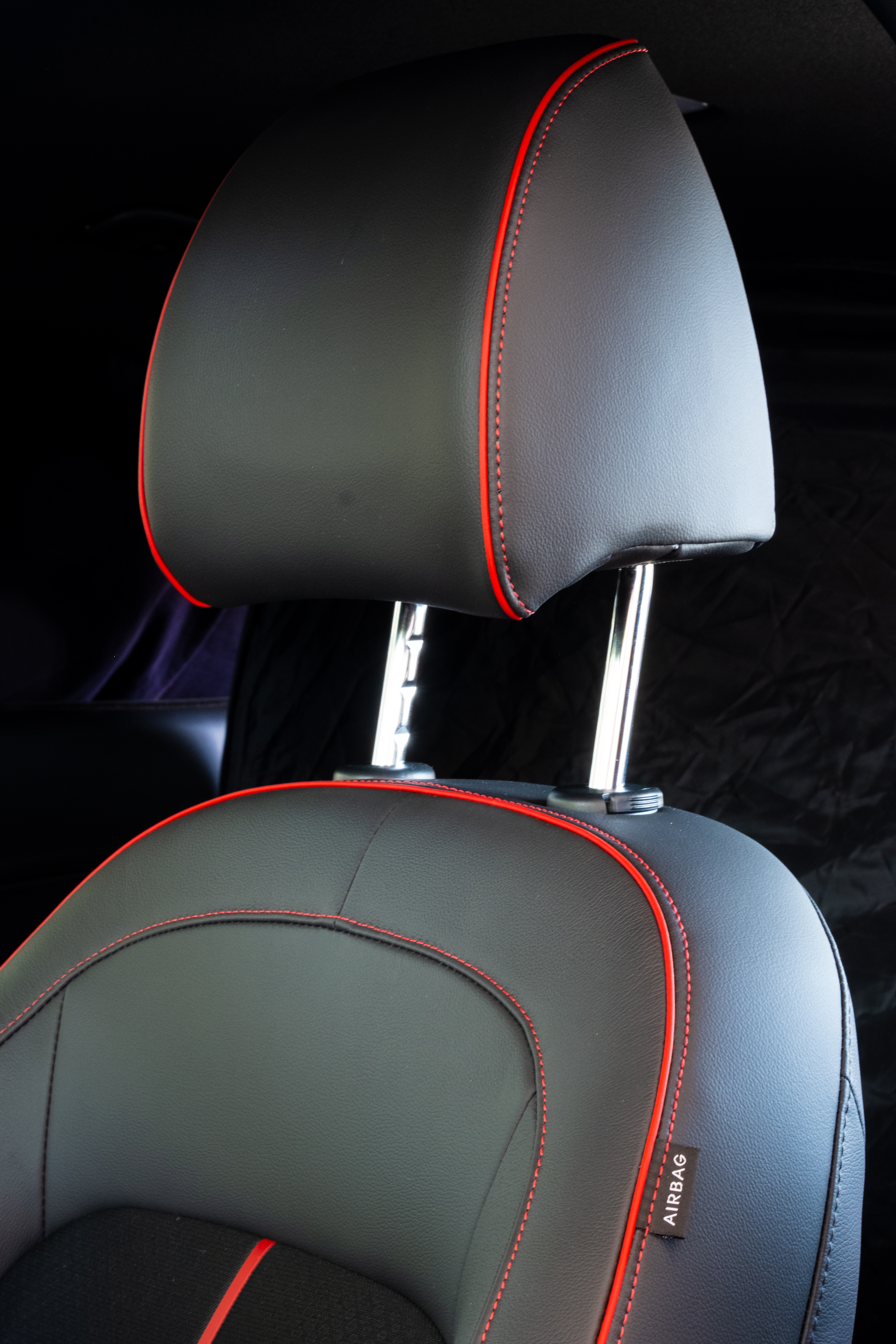 The result is striking, and downright revolutionary by Hyundai standards. Compared to the brand’s similarly positioned but more conventional Creta SUV, for instance, the Kona is a showstopper.

The remaining styling details are equally evocative. The sculpted flanks are emphasised by a curving crease line stretching from front to rear, while the black moulding that’s wrapped around the lower edges of the crossover emphasises the sills and the flared wheel arches. 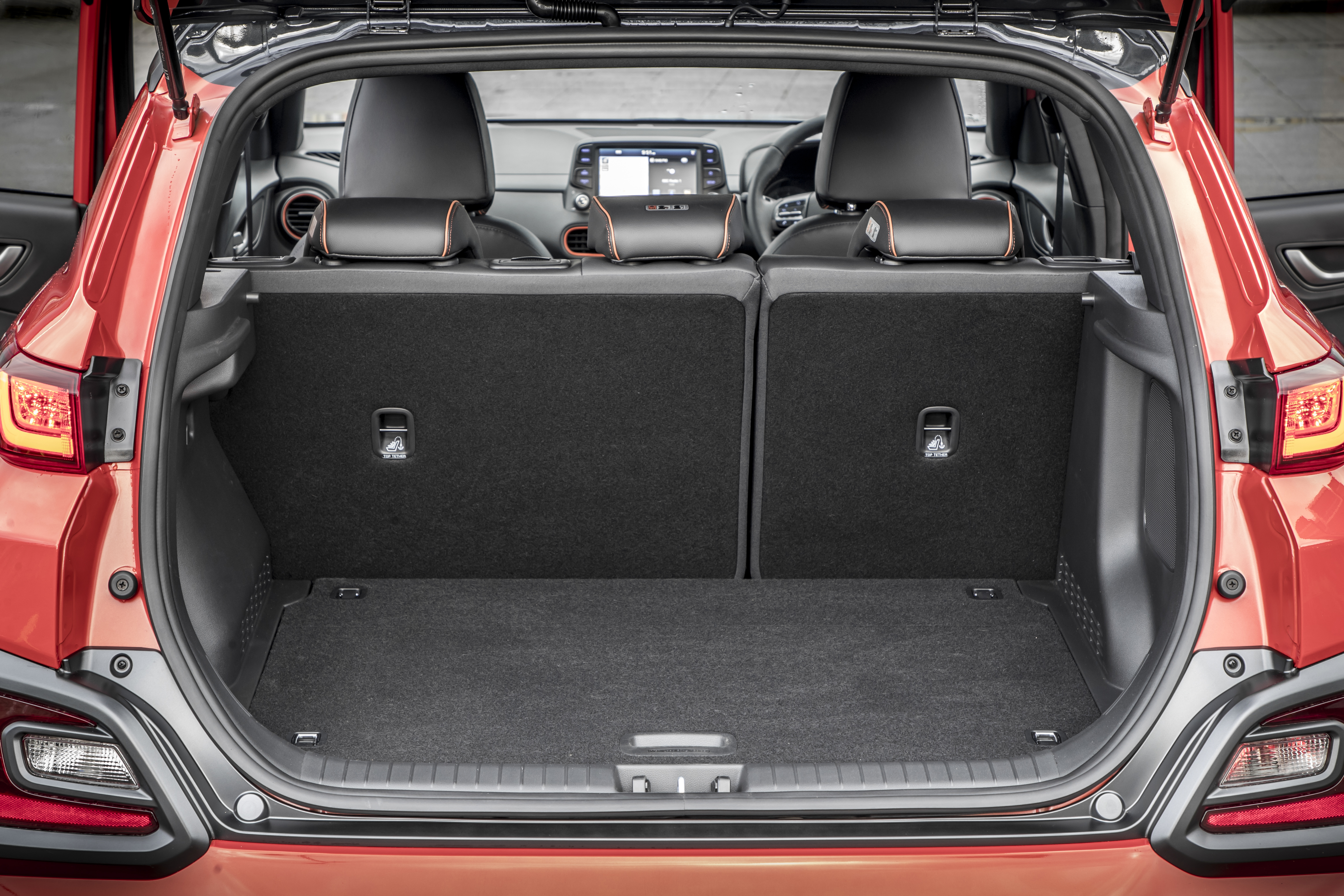 Leaving no doubts as to its urban application, the Kona’s 17-inch wheels are handsome, but perhaps a little too fragile for anything beyond mild gravel. Similarly, the 55-profile tyres are better suited to tarred surfaces.

If the exterior is eye-catching, then the cabin places the emphasis firmly on quality, in both design and execution terms. There’s a welcome cohesion that makes ergonomic sense, while judicious use of colour will please the fashionistas, too.

Depending on the exterior hue, interior elements such as the air vent surrounds, seat belts and upholstery stitching are finished in red or green, while the cloth upholstery has a high-tech finish that looks and feels good, and promises durability.

There’s still a fair amount of hard plastic scattered about the cabin, but it’s not obtrusive, with clever use of contrasting textures and surfaces adding tactile and visual appeal. Fit and finish is impressive, and there’s an overall solidity that augurs well for long-term use. 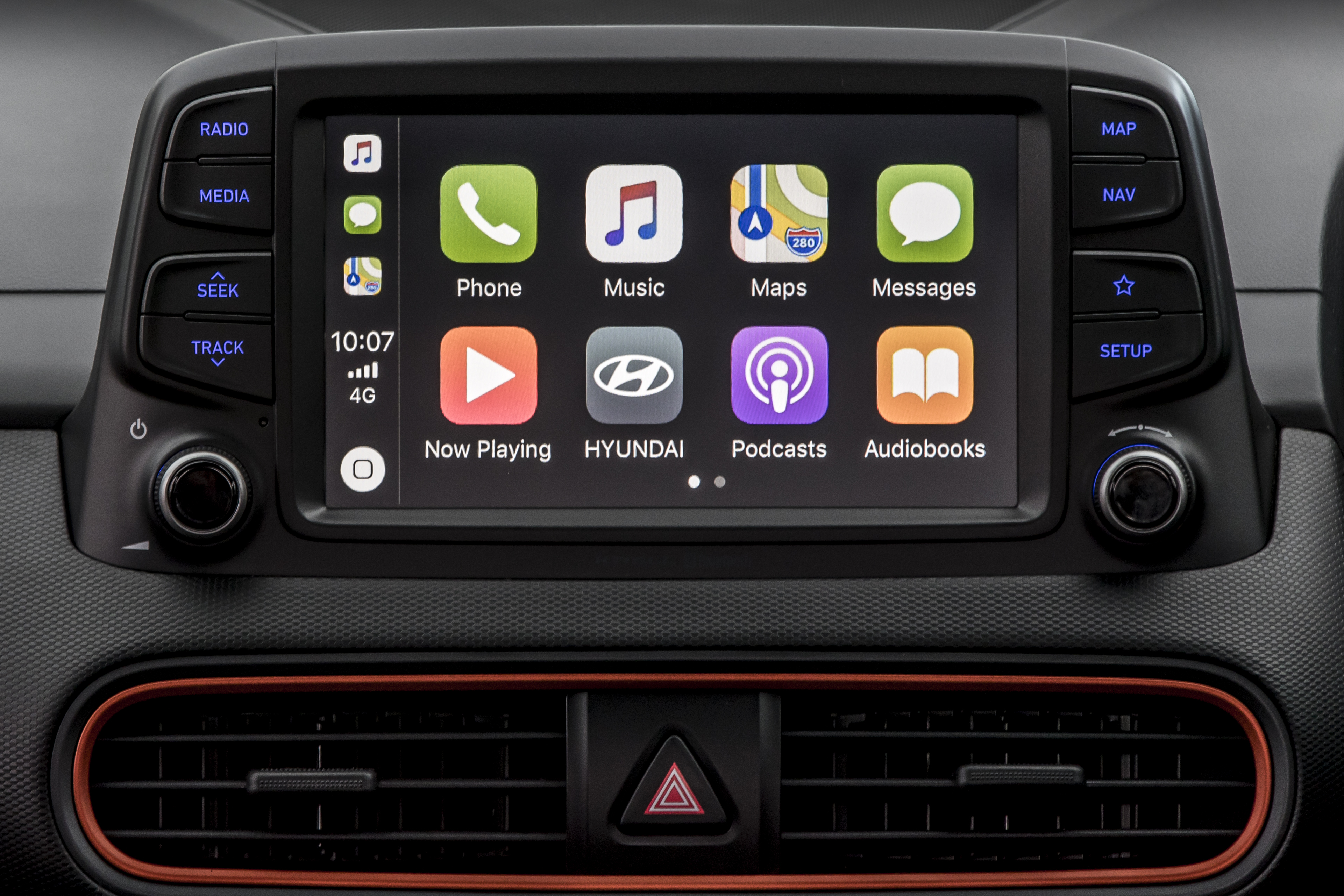 As for standard kit, the Kona offers most of the important stuff, starting with the colour touchscreen that dominates the centre stack. It’s large enough to be clearly legible and within easy reach.

The 18cm touchscreen is the gateway to the Kona’s infotainment system, which includes all the usual entertainment and connectivity options, including Bluetooth-driven telephony and audio streaming, USB and auxiliary ports, and an FM/AM tuner. It’s also home to the parking assistance system’s rear-view camera.

A welcome inclusion is seamless integration with Apple CarPlay, albeit only when the iDevice is plugged into the system via USB. Android users need to download a workaround to allow their smartphones to offer a similar level of screen/function mirroring, though.

As for space, there’s better than expected rear head and legroom, given that this is a subcompact crossover measuring just a smidgen more than 4.1m long. A decent wheelbase helps, but some of the rear space has been stolen from the boot, which is only modest at 361litres. 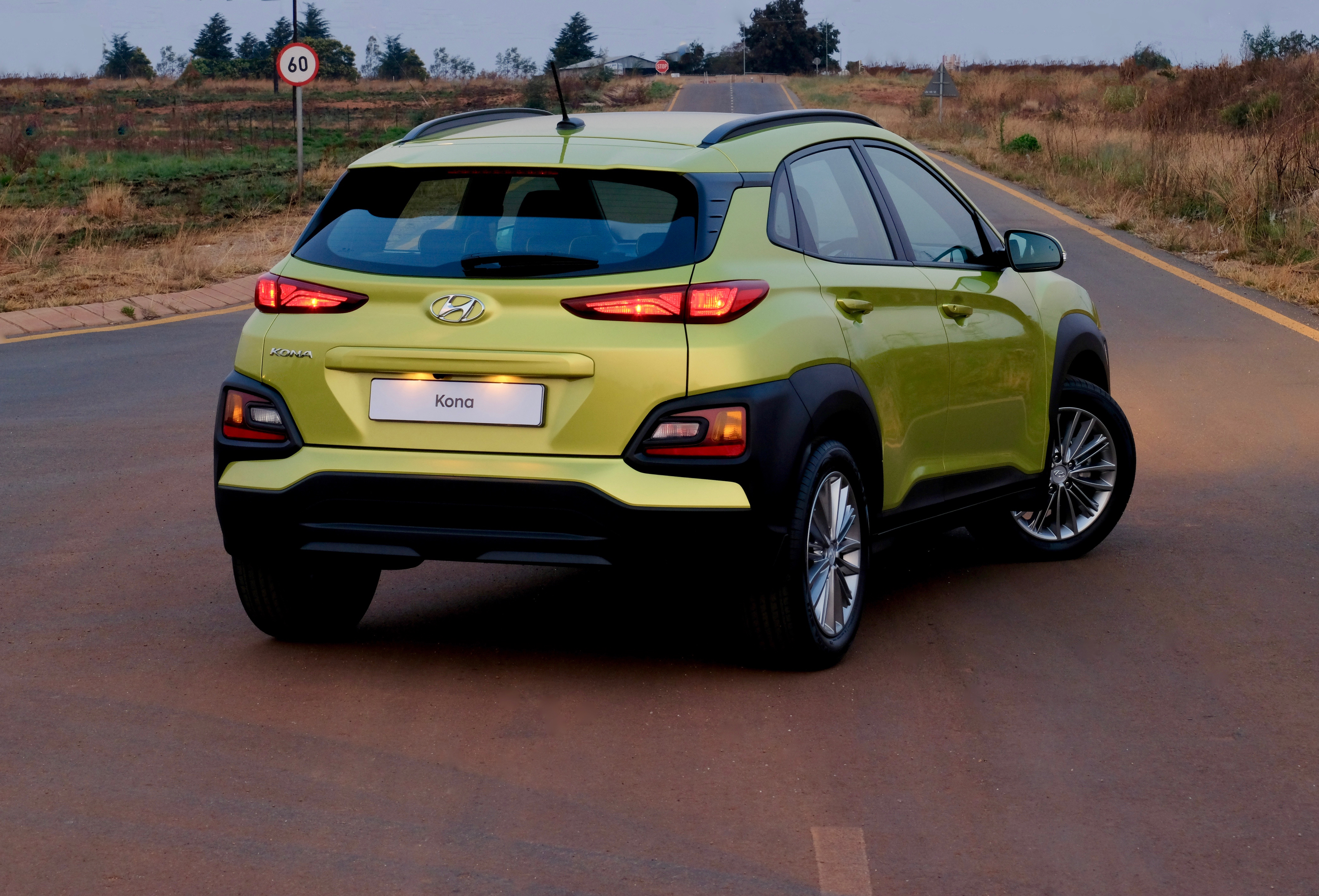 There’s a hidden oddments tray under the cargo floor, but in reality, it’s too shallow to be practical. If you need to transport something bulky, folding down the split rear bench seat at least extends cargo space.

Disappointingly, the spare wheel is a space saver, fitted to free up some boot space. Imagine having to make do with a skinny spare after a puncture while on a long holiday trip with a full complement of occupants and luggage. And where do you squeeze in the now flat full-size wheel?

For the South African market, the Kona is offered in two distinct versions. Both are front wheel-driven, further emphasising the Hyundai’s city slicker crossover personality. 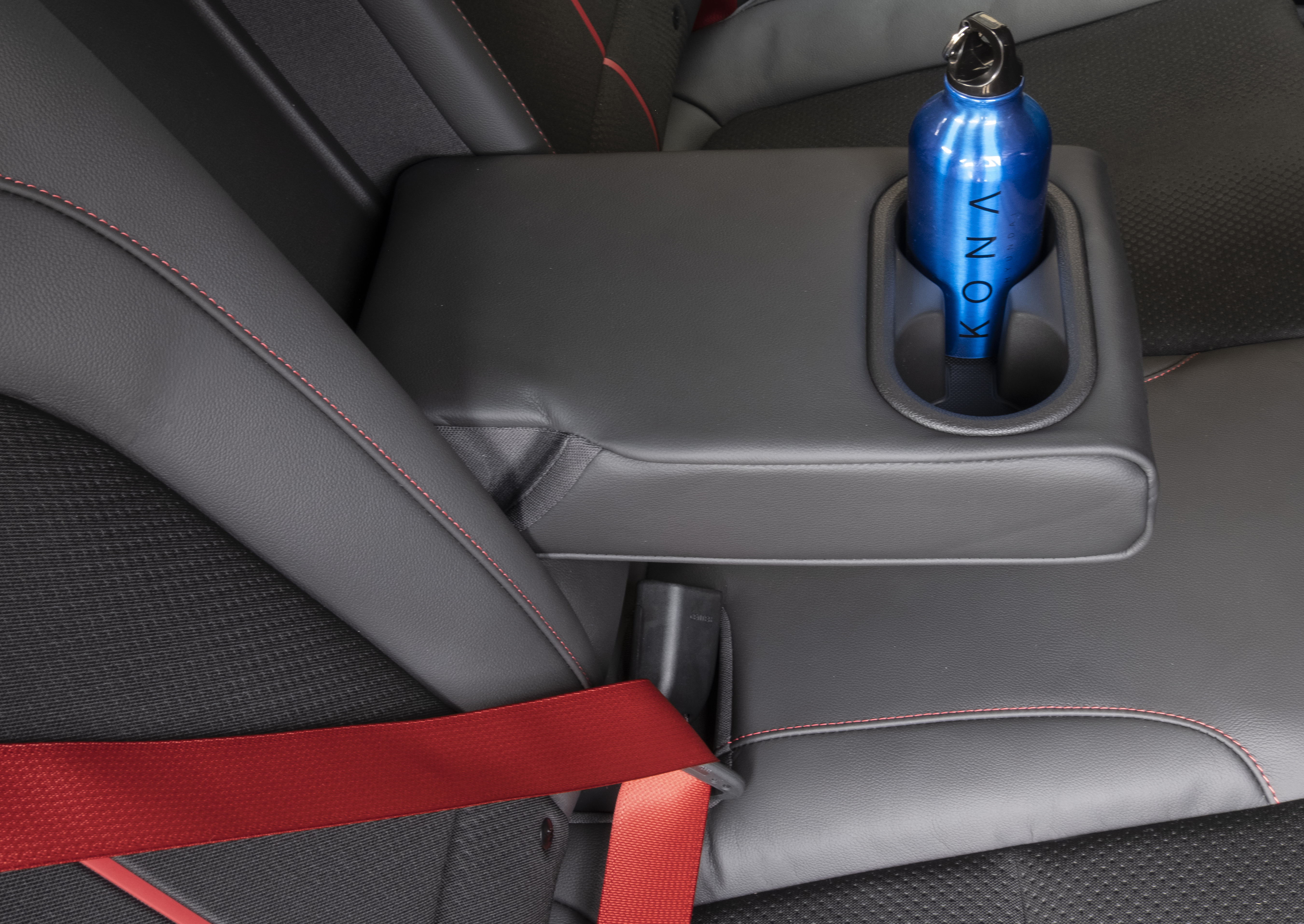 Choosing between the two models is determined by your transmission preference. For manual gearbox fans, the Kona comes with a peppy, 1.0-litre three-cylinder turbo petrol engine, while those who prefer an auto ‘box get a normally-aspirated 2.0-litre mill.

The 1.0-litre TGDI unit is credited with 88kW of maximum power and 172Nm of torque, which may sound a little underwhelming. However, considering that the torque peak is already reached at 1,750 r/min, and plateaus all the way to 4,000 r/min, there’s more punch than expected.

By comparison, the 2.0-litre has 110kW and 180Nm on tap, but demands a full helping of revs before giving its best. Maximum torque is only achieved at a peaky 4,500 r/min, which demands frequent use of the auto gearbox’s kick-down function. 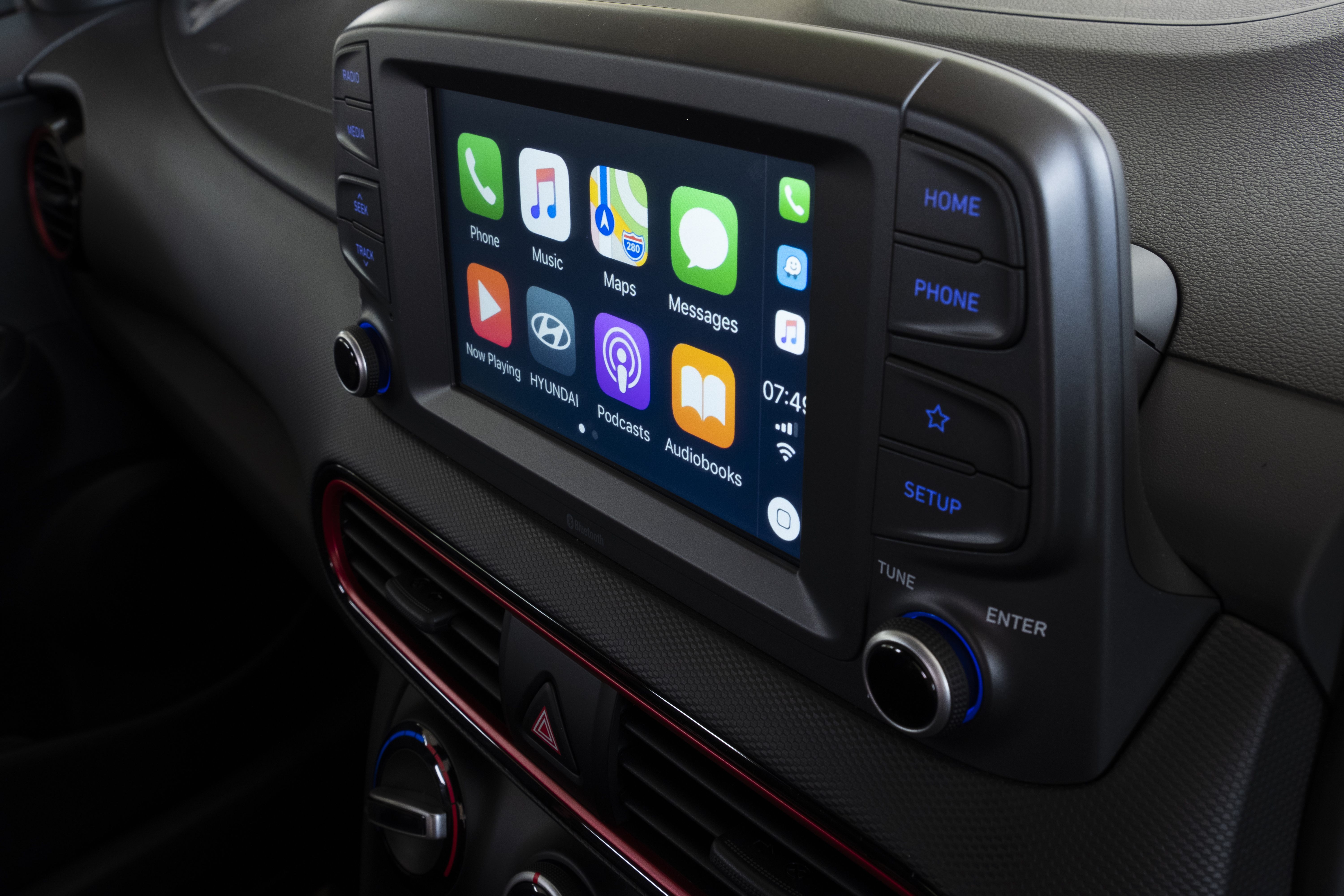 And yet, the two models have distinctively different personalities. Piloted on a short launch route at Highveld altitudes, it was the 1.0-litre manual model that provided the more enjoyable driving experience.

The turbo engine always felt gutsy, with no lag to speak of, and good midrange punch, while using the manual gearbox only added to the crossover’s dynamic appeal. It certainly seemed zippier than the 2.0-litre auto, even if the factory figures suggest otherwise. 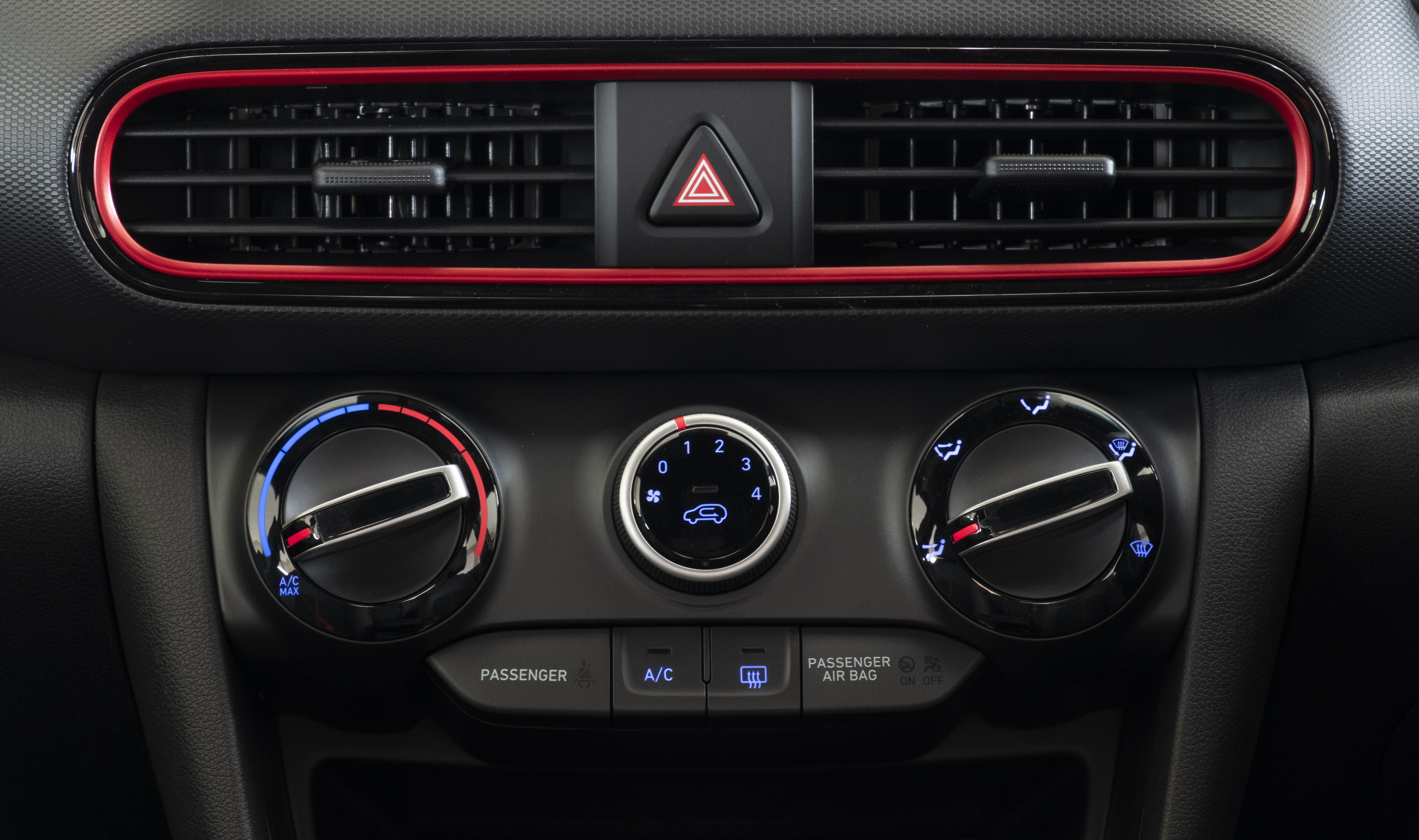 However, the larger engine’s need to be revved hard, combined with the relaxed approach of the auto box, isn’t always the best combination, especially at Johannesburg’s 1,600m altitude. However, there is the leg-saving convenience of an auto ‘box in stop/start traffic to consider …

Both cars sparkle in the handling department, though, feeling much more planted and predictable than you’d expect of a tall-stanced crossover. There’s even a measure of steering feel when cornering, although I doubt many Kona drivers will notice it – or care, for that matter. 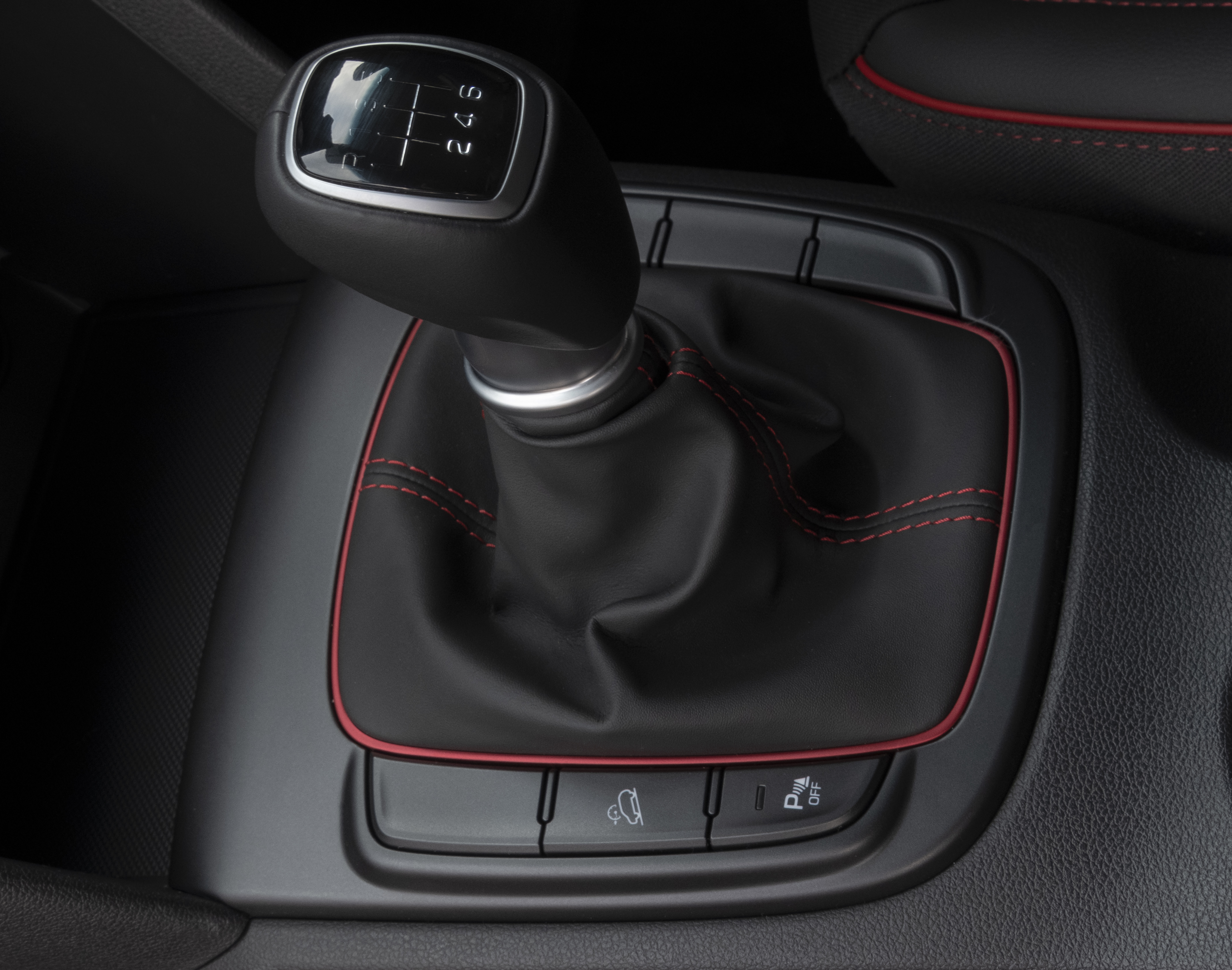 The crossover’s attitude remains nicely settled in the twisty stuff, and if you do overcook it, the understeer is mild and progressive enough to prevent any white-knuckled excursions.

The Kona offers a trendier, more lifestyle-orientated package than the likes of the Ford Ecosport and the Honda HR-V. Its more natural rivals include the excellent Mazda CX-3, Toyota’s slightly oddball CH-R, and the ageing Nissan Juke.

Pricing is relatively competitive, while the class-best seven-year powertrain warranty and five-year/90,000km service plan should help to contain running costs. 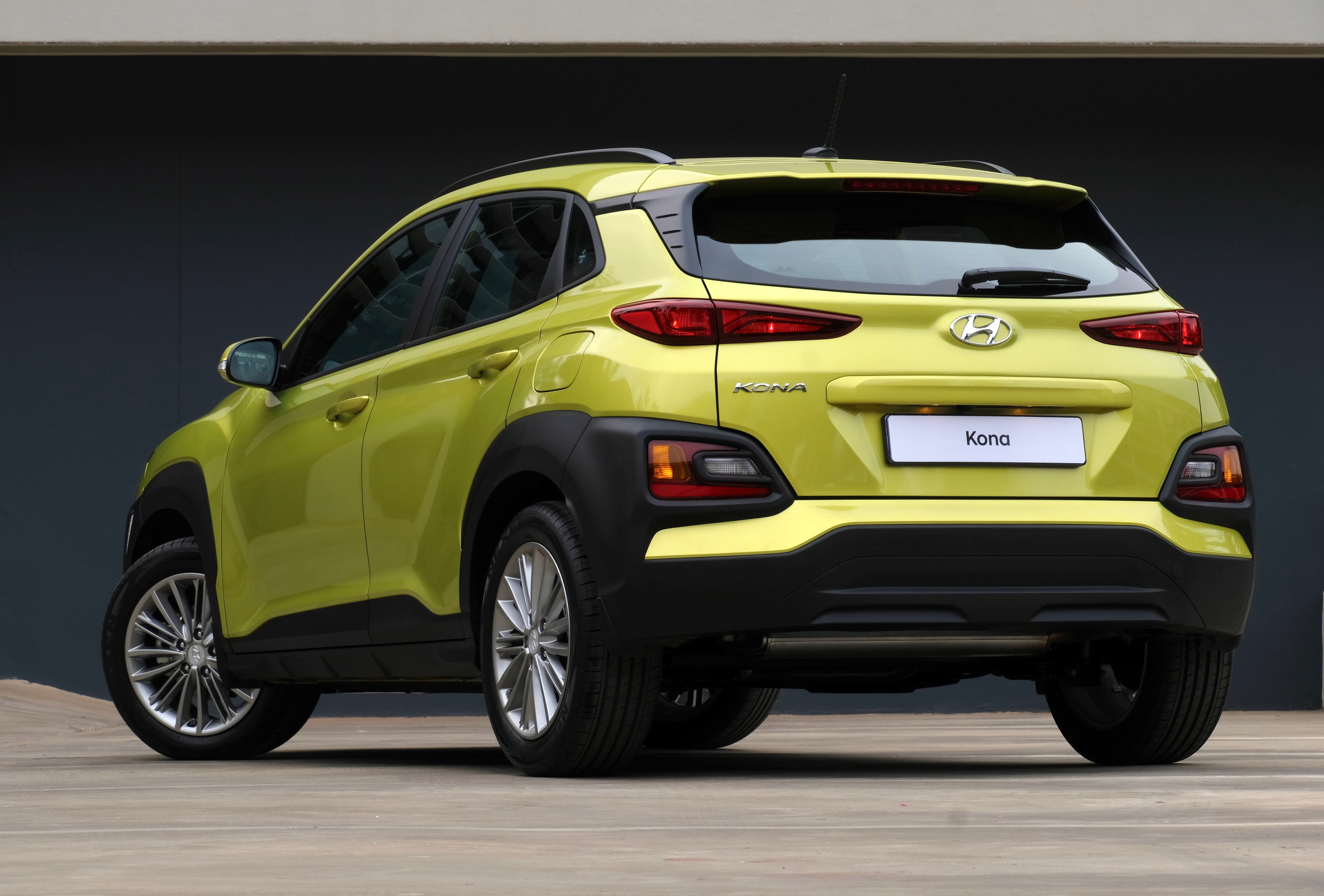 Most significantly, the Kona is Hyundai’s most aspirational car yet – and you don’t need to travel to Hawaii to experience it. It also signals a design direction that may well spawn a new generation of head-turning Hyundai models.