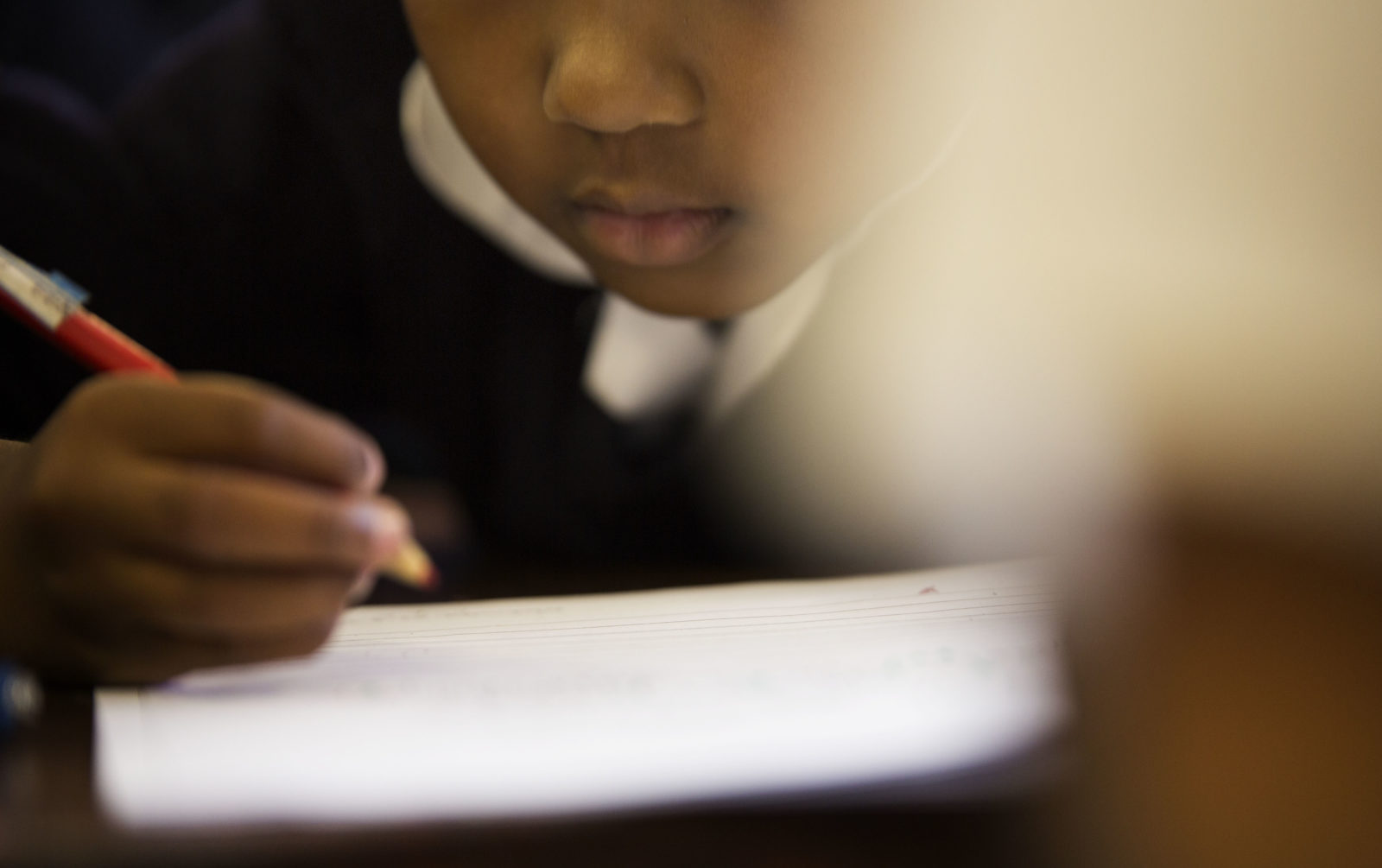 Grade one learners hard at work in a Cape Town school. 8 March 2018. Photo by Leila Dougan

In 1994 President Mandela signed the International Covenant on Economic, Social and Cultural Rights, signalling South Africa’s commitment to fulfilling and protecting fundamental human rights in the post-apartheid era. While South Africa signed the covenant in 1994, it was only in 2015 that the country ratified it — committing to align its domestic laws with the requirements of the covenant. One of these rights is basic education.

In the last month, South Africa has spent much time showcasing itself on the international arena. In the past three weeks alone, President Cyril Ramaphosa unveiled a grand statue of Nelson Mandela at the UN Headquarters in New York, and later made his debut address before the UN General Assembly, where he spoke admirably of Mandela’s leadership.

A week later, once again before the UN in Geneva, President Ramaphosa’s government had to speak about South Africa’s record on its realisation of socio-economic rights since the advent of democracy. While Ramaphosa’s debut speech before the General Assembly celebrated Madiba’s legacy, the conversations that emerged in Geneva suggested that South Africa is quite far from realising the ideals Mandela envisioned for the country.

In 1994 President Mandela signed the International Covenant on Economic, Social and Cultural Rights, signalling South Africa’s commitment to fulfilling and protecting fundamental human rights in the post-apartheid era. The covenant is the most comprehensive international treaty on socio-economic rights, providing for the protection and realisation of the rights to education, housing, health, social welfare, language and culture, among others.

While South Africa signed the covenant in 1994, it was only in 2015 that the country ratified it — committing to align its domestic laws with the requirements of the covenant.

Ratification also means that the country is now subject to a review process, which obliges the South African government to submit regular reports and make oral presentations before the Committee on Economic, Social and Cultural Rights. Established by the covenant, this committee is comprised of 18 international human rights experts who sit at the UN in Geneva.

Their role includes reviewing each signatory country’s progress towards the realisation of these rights. South Africa’s first country report was submitted in 2017 and the review before the committee took place in the week of 1 October 2018.

The committee encourages civil society participation in its review process. Through the submission of written statements, alternative reports and oral presentations during the committee’s review sessions, civil society organisations give the committee greater insight into the practical realisation of economic, social and cultural rights in their respective countries.

Equal Education (EE) and Equal Education Law Centre (EELC) joined other civil society organisations in providing the committee with an alternative report on South Africa’s progress on the achievement of socio-economic rights. In their joint report, EE and EELC focused on the country’s progress on the right to basic education, such as the state of school infrastructure; the provision of government-subsidised transport, especially to rural areas and for disabled learners; the exclusion of learners without birth certificates and identity documents; the illegal practice of charging school fees in no-fee schools; and the difficulties single parents often face in applying for school fee exemptions.

Following presentations from civil society organisations, a high-level government delegation, led by Deputy Justice Minister John Jeffrey and SA Ambassador to the UN, Nozipho Mxakato-Diseko, was given an opportunity.

They addressed government’s realisation of socio-economic rights in South Africa and responded to issues raised by members of the committee. Committee members requested information on many issues raised by EE and EELC and, impressively, made other education-related inquiries.

This included the government’s investment in early childhood education, noting that SA had not achieved much success in this area. High drop-out rates as a result of teenage pregnancies, problems with budgetary cuts in school infrastructure and the lack of a robust regulatory framework regarding the privatisation of basic education were also brought to the fore.

The government submitted several positive responses, including its commitment to prioritise access to schools for children with disabilities, and stressed that the charging of school fees in no-fee schools was illegal. The government also indicated that it was reviewing its school transport programme, improving foundational knowledge, and developing a policy on pregnant learners. In addition to these, the government mentioned the challenge it encountered with issuing documents to undocumented learners — specifically, that parents failed to come forward.

While the government must be commended for the great strides it has made in realising the right to basic education over the past 24 years, it must be noted that the delegation failed to provide information regarding the challenges of privatising basic education, or the steps that will be taken to address the violations suffered by undocumented learners.

In addition, no substantive response was given on the impact of budget cuts to school infrastructure — an aspect that affects the safety of thousands of learners every day.

And in addition to these issues, it must be noted that when South Africa ratified the covenant, it made a so-called “declaration” indicating that, in terms of certain covenant obligations, it would be bound only to the extent to which the government chose. South Africa’s declaration was in respect to the right to education.

The government indicated that instead of being bound to the covenant’s broader obligation to provide free primary education to all, it will be bound only to providing education “within available resources”, subject to “progressive realisation” and within a “national legislative framework”.

This completely contradicts the South African Constitution, which stipulates that the right to basic education is immediately realisable, and not subject to any of the qualifiers the government indicated in the declaration.

Professor Olivier de Schutter, a committee member and SA’s country rapporteur, raised the committee’s concerns about this contradiction with the Constitution.

The government skirted around the contradiction in its response and merely focused on the question of fees in both primary and tertiary education — only to end with a concession that government will engage civil society on the issue of the declaration.

Worryingly, this response indicates government’s intention to water down the provisions of the Constitution, and indeed flies in the face of Ramaphosa’s endorsement of Mandela’s legacy and leadership.

Critically, it also highlights the importance of the covenant’s review process in holding the government to account for the realisation of socio-economic rights.

In the next few weeks, the committee will issue a report with findings and recommendations, titled Concluding Observations. It is important for all South Africans to be aware of these findings and join civil society organisations in holding government to its obligations under the covenant.

In light of the severe economic and social inequalities experienced by millions of South Africans on a daily basis, the covenant can play an influential role in developing and transforming our legal, administrative and political landscape. South Africa is obliged to take steps to realise socio-economic rights in accordance with its obligations. In five years’ time, South Africa must appear again before the committee and showcase its human rights record. Hopefully this public scrutiny will force government to align its actions with its stated commitment to Nelson Mandela’s leadership and legacy. DM

Gemma Ritchie for amaBhungane • 10 hours ago