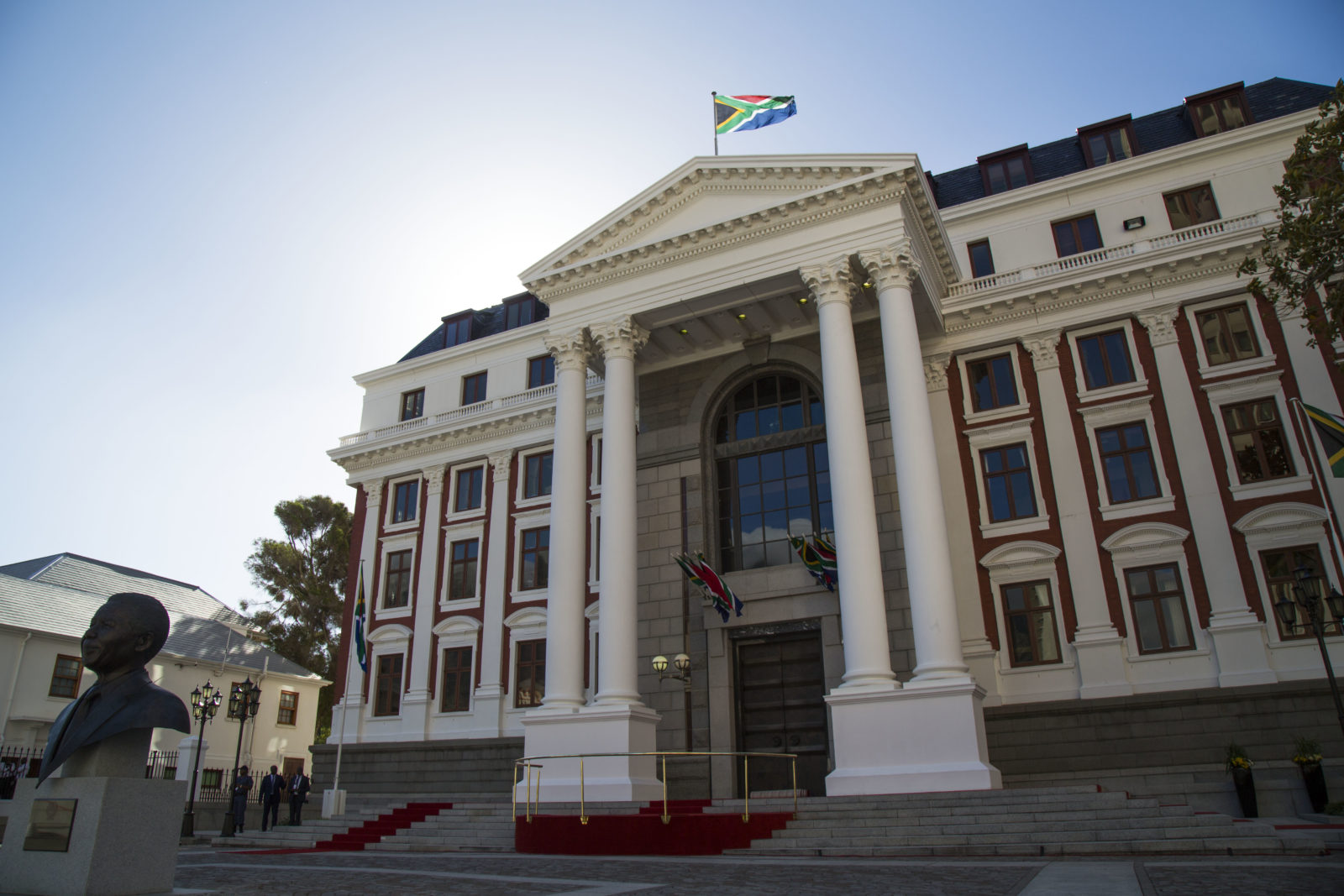 Four months after the contract of the Parliamentary Budget Office (PBO) director was extended by a motion in the House, the post is empty. That vacancy in the statutory office established to provide “independent, objective and professional advice and analysis” on budget and related matters comes at a critical time in Parliament, as committees are ploughing through departmental and entities’ annual reports and audited financial statements. Questions are being asked.

On 29 May 2018 in the last sitting before Parliament’s extended 10-week mid-year recess, ANC Chief Whip Jackson Mthembu moved a motion to extend the contract of Parliamentary Budget Office (PBO) Director Professor Mohammed Jahed. With a vote of 220 for, 65 against and one abstention, the National Assembly agreed to extend Jahed’s contract until three months after the 2019 elections.

It a decision rushed through in two weeks, as merges from various parliamentary documentation like the unrevised Hansard transcripts and Announcements, Tablings and Committee Reports (ACT), or Parliament’s record of work.

Jahed’s five-year contract that last year earned him R2.45-million, according to Parliament’s 2017/18 annual report, was due to expire on 3 June 2018. Only on 16 May 2018 did National Assembly Speaker Baleka Mbete officially referred the matter to the relevant committees of appropriations and finance. A week later by 24 May the committees had taken the decision to extend his contract, rather than look for a new candidate, according to the ATC.

As the PBO director’s contract ended in the midst of the parliamentary recess, the contract extension was put on the Order Paper just before the break. And that’s what happened on 29 May.

ANC MP Thandi Thobias argued for the extension, according to the unrevised Hansard: “The Speaker of the National Assembly requested extension until three months after the 2019 elections. For logical reasons, the Office of the Speaker wants to ensure a smooth transition and to maintain good institutional memory…”

The DA opposed the reappointment as procedurally flawed – “It is clear that the process did not take place in an open and transparent manner as is required by the legislation,” said DA MP David Maynier – and other opposition MPs also raised concerns.

“The role of this office is confused and it has been reduced to babysitting the Standing Committee on Finance instead of giving independent, objective and professional advice,” said EFF MP Nazier Paulsen, as IFP Chief Whip Narend Singh argued that the next post-2019 election Parliament would have to give the PBO more attention.

“It requires more funding, more warm bodies because at the moment the service it offers is restricted just to a few committees, and yet looking at PBOs around the world and we went on study trips the PBOs provide service to all members of parliament when they require it.”

The ANC numbers carried, and Jahed’s contract was expired until three months after the 2019 elections, which effectively kicked any decisions to that new Parliament and for the appointment to be made under a newly amended Money Bills Amendment Procedure and Related Matters Act.

It all seemed settled – but on 1 September Jahed resigned and left after a months’ notice. He told Daily Maverick: “I resigned due to family reasons… 1 October I was back in Gauteng.”

DA Chief Whip John Steenhuisen is livid. “Clear there was remarkable bad faith shown, if not a deliberate misleading of the legislature regarding the PBO,” he told Daily Maverick. “It’s clear they had someone in mind. Professor Jahed was a placeholder until that person was available and there’s a change in the law… It’s very cynical.”

According to critics, the legislative changes increasingly politicise the PBO, and shift oversight to politicians at Parliament, rather than the Houses and its committees. Central appears the role of the contemplated “advisory board” of the chairpersons of Parliament’s two finance and two appropriations committees and two House Chairpersons, effectively quasi-assistant speaker-like positions to help facilitate the smooth running of Parliament.

Co-incidentally that advisory board would put into law what Jahed had established in practice as an “advisory panel” that, according to insiders, has effectively been in charge of what the PBO does even though its meetings are not open to everyone. It is unclear whether the four committee chairpersons report back to their respective committees, or others.

Maynier is on public record critiquing the PBO for ignoring research requests from opposition parties as the Act allows in Section 15.3 “(the PBO) may undertake research on request of the Houses, or committees or Members of Parliament…”

Questions are being asked about the PBO director’s contract extension, given he resigned just four months into the term. And in parliamentary corridors questions are being whether his resignation had any relation to a probe, frequently referred to as “forensic audit investigation” that, as Daily Maverick is reliably informed, included interviews with PBO staffers some two months ago.

Parliament spokesperson Moloto Mothapo on Wednesday dismissed this. “Professor Jahed’s resignation, which was accepted by the presiding officers, is based on his family/personal considerations and has nothing to do with any alleged investigation,” he said, adding also: “The labour relations matters in the Budget Office were resolved by the CCMA (Commission for Conciliation, Mediation and Arbitration) and there exist no further investigation of either the office or its director.”

There was no direct response to direct questions about a “forensic audit investigation” and its costs, and mismanagement allegations.

The labour matter cited in Parliament’s responses is a reference to an unfair labour practice complaint. In late 2016 Sean Muller had resigned and gone to the CCMA in an unfair labour complaint, saying he was being overlooked for promotion at the PBO for not doing favours for MPs. The CCMA ruled against him on 26 April 2017.

“Allegations made by a former staff member against Professor Jahed were dealt with by the CCMA, and were subsequently dismissed following a due process. As a result there are no issues in relation to both Parliament’s resolution to grant him new contract and his recent resignation,” said Mothapo.

However, the DA is determined in getting hold of the report of the investigation at the PBO. “Where is this report?” said Maynier. “It is crucial there is a full and proper explanation why Mohammed Jahed left the PBO under what appears to be a cloud”.

Meanwhile, Parliament is also losing its chief information officer, Unathi Mtya, some two years after she joined, and eight months into a 12 months service period related to a controversial R265,000 bursary she received to study for a Masters of Technology through Harvard University’s campus in Paris, France.

Mtya graduated in May 2017 and returned to Parliament, where her job this year took her to speak at various IT conferences, including the Africa cyber security gathering in Nairobi, Kenya, in August 2018.

Mothapo confirmed Mtya has repaid Parliament R88,333 to settle bursary-related obligations. “Parliament’s policy provides for bursary holders to remain in service for a period of 12 months following the completion of their studies in the preceding academic year… Ms Mtya had served eight months of the 12 month service period and was liable for a pro-rated amount of R88,333 for the remaining four months of the service period. In this regard, she has settled her obligations.”

Mtya’s departure from Parliament also emerged on social media, where posting a nomination by the Businesswomen of South Africa’s 2018 awards, government category, she also announced in early August: “I’m at the end of my tenure in the Public Sector” on Instagram, also adding on Twitter: “It makes me feel like I’ve done my part. God is still with me as I go pursue other opportunities…”