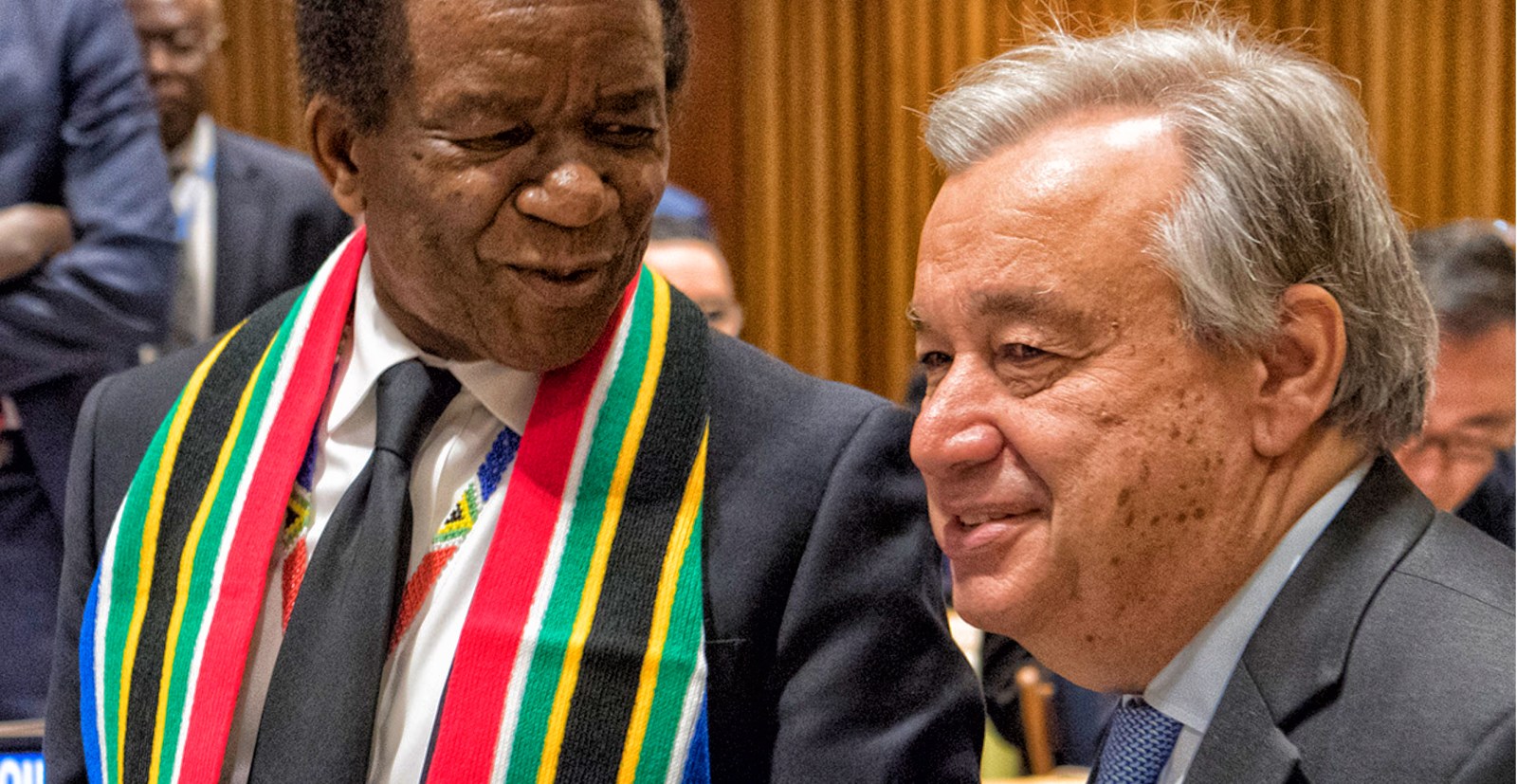 Secretary-General António Guterres (right) speaks with Jerry Matthews Matjila, Permanent Representative of the Republic of South Africa to the UN, prior to a Special Memorial Service to honour Winnie Madikizela-Mandela on 13 April 2018, New York.

Unresolved investigations into claims of fraud and mismanagement have led to some serious mud-slinging in the department of international relations, and could even bedevil South Africa’s work as it takes up its much-prized two-year seat on the United Nations Security Council in January 2019.

South Africa’s ambassador at the United Nations, Jerry Matjila, was praised on the sidelines of the UN General Assembly last week as one of the main organisers of the Nelson Mandela Peace Summit, with Ireland’s representative, Geraldine Byrne Nason.

There is, however, uncertainty over whether he will see out his term, which started in 2016 and which is set to span the upcoming two years that will see South Africa occupy a seat on the UN Security Council. It’s the third time that South Africa has managed to be elected to the Security Council, following some serious international lobbying, and it is significant given the reforms it wants to advocate for from within.

Officials in the department of international relations have, however, been whispering about allegations against Matjila. One is a five-year-old accusation of fraud related to issues flagged by the auditor-general involving the African Renaissance Fund when Matjila was director-general of the department.

The fund is used to provide humanitarian assistance to struggling countries, most of them on the continent.

Matjila, who is one of South Africa’s longest-serving post-1994 diplomats and regarded by those who like him as highly efficient, survived the allegations and went on to his current position in New York.

It is not clear what happened to the investigation, but it is possible that it will be re-opened. At the very least it would have to be dealt with before January to avoid a disruption of South Africa’s work at the UN, and not provide ammunition to South Africa’s detractors.

Also, President Cyril Ramaphosa has been boasting to anyone who cares to listen that South Africa is cleaning up the graft that happened under the previous administration — something that matters in New York.

An official said the department was looking at issues raised by the auditor-general in the past, and the African Renaissance Fund concerns “could come up in this context”. Things would become clearer within the next two weeks, he said.

The auditor-general pointed out problems around the fund in 2012, and these related to half a billion rands’ worth of irregular expenditure.

At the time it was reported that Matjila would be investigated for allegations that he appointed his preferred company in a R53.9-million contract instead of channelling R250-million in humanitarian support through the World Food Programme, as directed by Treasury. He was also accused of understating the fund’s irregular expenditure by more than R141-million — it was R529.5-million, and he allegedly disclosed R388.1-million.

Matjila at the time told a parliamentary portfolio committee the auditor-general’s negative findings were not problematic, but a departmental official said the committee could still call Matjila to account if it wanted to.

“Auditor-general issues arise every year after an audit. Some recur,” he said. “All the issues raised must be considered and something done about them, until the portfolio committee is satisfied. They remain on the agenda. The older they are, the worse. That’s how the system works.”

United Democratic Movement leader Bantu Holomisa in 2013 wrote a letter to former president Jacob Zuma, the former minister, Maite Nkoana-Mashabane, as well as to the present minister, Lindiwe Sisulu, who was then in the public service and administration portfolio, asking that they act against Matjila.

In the letter he questioned whether Matjila received instructions on disbursing money from the fund directly from Zuma and Nkoana-Mashabane, as the department’s internal audit committee alleged.

Holomisa said he had, to date, received no reply. “I heard that the report was with the minister of international relations, who is now at the department of rural development,” he said.

The renewed investigations seem to be a direct consequence of the change of political leadership at the department which followed the resignation of Zuma in February.

It has also led to the re-opening of some bitter infighting, which has been playing out in anonymous “open letters” circulating on social media in the past few weeks. In one of these, director-general Kgabo Mahoai is accused of protecting Matjila, as well as the chief financial officer, Caiphus Ramashau.

Mahoai has recently been on extended sick leave.

Ramashau is being investigated in relation to millions of rands worth of irregular contracts for which he was responsible. An anti-corruption task team put together by government, told Parliament last year that the Hawks were investigating Ramashau’s case, which has also been open for a few years and which has caused tensions between him and, among others, staff members belonging to education, health and allied workers’ union Nehawu.

There has already been one recent attempt by the ANC to move Matjila out of New York City — he was one of three nominees for the post of North West premier after Supra Mahumapelo’s sacking.

A government official, who spoke of Matjila with admiration, said he would not be surprised if Matjila received a Cabinet position in the near future.

Ramaphosa crafted more than one opportunity in New York to talk to Matjila in private, once when he gestured for Matjila to catch a ride with him instead of using his own car, and another time when he invited Matjila to his hotel room for breakfast.

Sisulu granted only a limited number of media interviews on the sidelines of the UN General Assembly, and on Friday said she was too tired and busy to accommodate more.

Matjila referred questions and an interview request to the department, but Sisulu’s spokesperson, Ndivhuwo Mabaya, said that the minister and the president would speak about South Africa’s work at the UN.

By close of business on Tuesday, Mabaya had not yet responded to questions emailed to him in this regard first thing on Tuesday morning. DM