Outside UN headquarters, a democratic right to protest in fine fettle 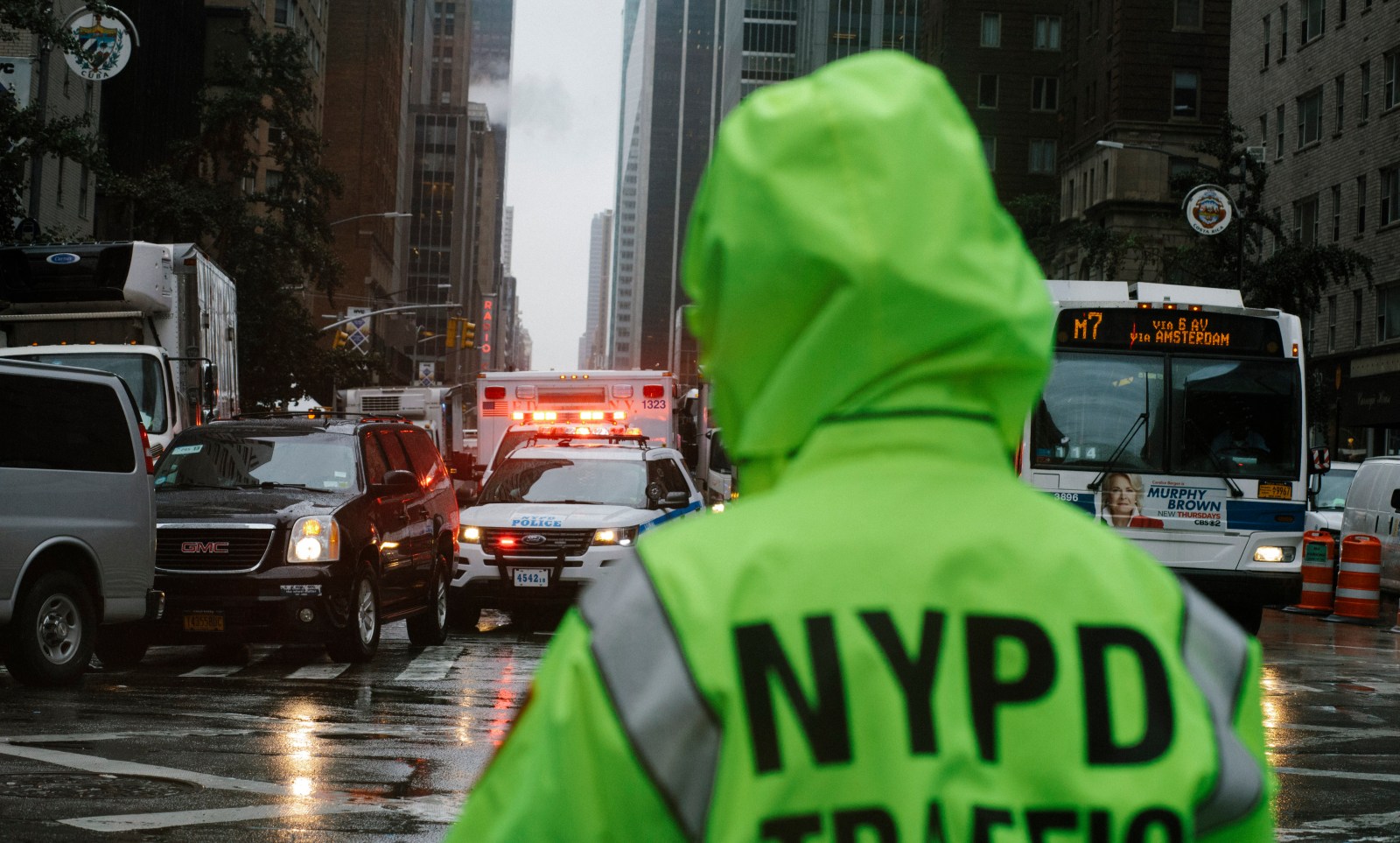 A New York Police Department (NYPD) officer watches cars in gridlock outside Trump Tower in New York, New York, USA, 25 September 2018. Media reports state that local authorities and the NYPD have boosed their security measures by channeling motor and pedestrians traffic in New York because of the US President being in town for the 73rd session of the General Assembly of the United Nations, at the United Nations Headquarters in New York. EPA-EFE/JOHN TAGGART

Heads of state and government officials are not the only ones who jet into New York every September to attend the United Nations General Assembly. There are the protesters too, who congregate in dedicated spaces outside the UN headquarters to make their points.

Inusa Musa works at Burger King. He was a singer in Togo, West Africa, but that was 15 years ago. But it’s okay. He now gets a lot of time to think.

Musa, 45, said he was arrested once when he got on the wrong side of the Togolese government and ended up fleeing to the United States, where life is all right.

“Here you can find a job, and if you follow the law, you have no problems.”

His is the optimism that cannot be dented even by US president Donald Trump’s anti-immigrant sentiments.

“In America … we have a democracy here.”

This is unlike in Togo, where President Faure Gnassingbé has been in power for 13 years. The dozen Togolese expats from New York or surrounds – Musa is from New Jersey – who overcame rainy fall (autumn) weather in the Big Apple on Tuesday to protest, say the president has overstayed his term. They want him gone, and they want to make it known on the day he’s scheduled to speak at the UN General Assembly.

It’s not a sight that you will ever see ahead of an African Union summit in Addis Ababa, where the security services go all-out to shield the heads of the 55 member states from embarrassment.

“The AU and the government is almost the same,” said Musa dismissively, when asked if he thought the continental body should do more for Togo.

It’s quite possible that more groups of African protesters – such as citizens of the Democratic Republic of Congo – could grace the square in the next few days, as their leaders jet in to address the world gathering.

The flag-bearing Togolese – one even proffered a black vuvuzela – are among several international protesters gathered on the Dag Hammarskjöld Plaza, named after the UN’s second secretary-general who died in a plane crash en route to the Congo in 1961. He was posthumously awarded the Nobel Peace Prize that same year.

Now the plaza in his name, and the Katharine Hepburn Garden, is a popular spot for work breaks and city dwelling dog-walkers, except on special occasions, like the opening of the UN General Assembly, when barriers go up to organise movement in and out of the square and smiling officers turn away the loudly grumbling pooch owners.

Other than that, everyone is allowed into the space, as long as you’re willing to open your bag and show the jovial security officials what is inside. They don’t want protests to turn deadly.

Dominating the demonstration space were the Iranians, who elevated the expression of malcontent – about president Hassan Rouhani’s presence in town – to theatre.

By the time Hassan Rouhani delivered his speech in the UN on Tuesday, they’d been at it for a few days.

The group apparently has a lot of money, and their operation on the plaza was impressive.

To the right of the entrance to the square, they set up an exhibition of hundreds of pictures of the faces of people who, they say, had been executed under Rouhani. Plastic flowers were arranged to look like a stream of blood.

Next to that, they had put up a set resembling a prison, with actors in prison clothes behind the “bars”, guarded by men in military uniform, kinkily wielding whips.

Opposite this makeshift prison, protesters were lined up in a military kind of formation, chanting to the beat of drums:

It’s the kind of words that made a South African stop in her tracks. The ANC regularly warns exactly against such an event in South Africa, because it’s supposedly inspired by the West.

Their protests are in solidarity with similar protests in Iran, which started in 2017 because of malcontent about the weak economy, strict Islamic rules, water shortages, religious disputes and local grievances.

When a shower of rain broke out, some of the protesters moved to put on yellow plastic ponchos, but they didn’t budge from their spot on the square.

A little further on, another group bearing Iranian flags were singing much the same tune, but with different words.

“We are all opposed to the government, but our ideologies are slightly different,” explained an Iranian man who had been coming from Canada for the past five years to protest.

“We are more secular.”

He said protesters came from all over the US as well as Europe and Canada.

Trump’s administration was likely to tacitly endorse these protests, as the US supports regime change. Addressing Iran’s self-declared government-in-exile on Saturday, Trump’s attorney, Rudolph ‘Rudy’ Giuliani, said the US sympathised with their efforts to overthrow the country’s official government. Alleged Iranian agents were criticised for wanting to assassinate two US-based members of this group.

Quietly in the south-east corner of the plaza, about 50 people with yellow jackets were doing slow, tai-chi type movements and holding banners with Chinese script on them. The group wasn’t as big as it’s been in recent years, but this was perhaps due to the chill.

The Chinese supporters of Falun Dafa, a religious form of moving meditation which followers claim brings about better health and cures illnesses, are a regular feature on the sidelines of UNGA.

Helen Wong, who has lived in New York for several years after she fled China, said the Falun Gong had been persecuted by the Chinese Communist Party since 1999 as part of a clampdown against religion.

Prisoners were tortured and sometimes killed, she said, which is why she preferred Manhattan.

Wong is in her 40s but she looked decades younger, an effect of her regular Falun Dafa practice, she said.

Chinese president Xi Jinping gave the summit a miss, but it’s unlikely that he would even have seen these protesters. The dogged demonstrators of the Dag Hammarskjold Plaza, in turn, are hoping that their voices would one day pierce the thick walls and security barriers of the world body’s headquarters. DM