Cosatu’s Zingiswa Losi: ‘There are no permanent friends or enemies’ 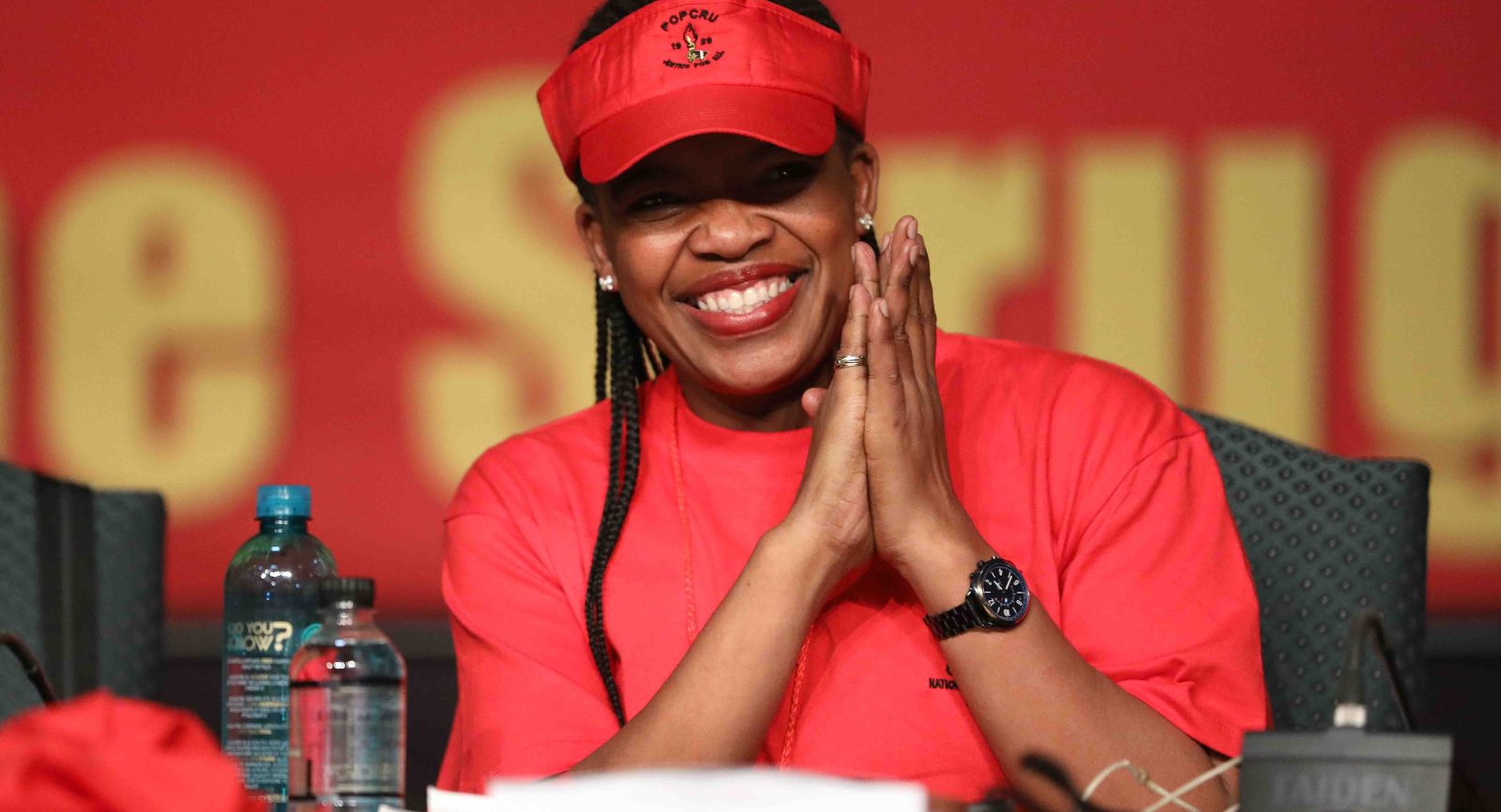 Cosatu’s Zingiswa Losi had a bitter fallout with her former colleague Zwelinzima Vavi back then, but while he departed from the labour federation to form his own, she rose to become its president. Navigating the alliance politics that caused many of her predecessors to fall might prove to be tough.

Moments after her rise to the presidency of Cosatu was announced at its conference on Thursday, Zingiswa Losi was carried to the stage and female delegates danced around her, singing a variation on the women’s struggle song: “Wathinta Losi, wathint’ imbokodo” (When you strike Losi, you strike a rock).

Losi herself beamed with emotion, clasping her hands together, nodding with a look of gratitude. She was the only nominee for the position, and there was no contestation for the other five positions either.

She was backed by education, health and allied workers’ union, Nehawu, one of Cosatu’s biggest, and other influential ones such as police union Popcru.

In an interview following her election, Losi for the first time talked about her fallout with metalworkers’ union Numsa, from which she resigned in 2013 after attempts to expel her.

She joined Numsa’s ranks in 2003, was elected Cosatu second deputy president in 2009, but by 2012 the union had conditions for further support.

“In order for Numsa to nominate me as second deputy president, I was told to support (then general secretary Zwelinzima) Vavi and not differ with him,” she said.

“I said if those were the conditions, I cannot agree with that, because when they sent me in 2009, they never said that about Vavi. So I said Numsa can keep their nomination.”

She managed to get enough support from other unions to stay on.

Following her re-election in 2012, Numsa tried to suspend her so that she would lose her position. Losi, however, claimed the letters of suspension they sent to her employer, Ford, in Struandale, didn’t reach her directly and were unconstitutional.

She also said the charges were trumped-up and there was no disciplinary hearing.

In the end she got a two-month contract with the police (which was later renewed), where she became active in police union Popcru. She said there was a precedent for her retaining her position as a Cosatu national office bearer, as something similar had happened before.

Numsa disagreed, but fell out of favour and it was expelled from Cosatu in 2014 for not supporting the ANC in the elections, contrary to Cosatu’s decision, and also for violating the labour federation’s constitution by extending its scope. Losi stayed on.

At the root of these differences was Cosatu’s continued support for former president Jacob Zuma, with Numsa, and office bearers like Vavi, increasingly vocal against their former “Zunami”.

Losi, who is 43, said however that her differences with Vavi weren’t about these principles, but didn’t specify what the issues were.

“I was told that, as a metalworker, I’m not seconded to Cosatu to upset Vavi, but expected to ensure he is comfortable.”

Numsa insiders from that time, however, said Losi was at best being “selective with the truth”. They said Vavi “ran Cosatu with an iron fist and made sure that no worker leader abuses workers’ hard-earned affiliation fees to enjoy niceties”.

The implication is that she wanted that.

Only full-time office bearers, such as the general secretary and the deputy, are salaried, while the rest are compensated for the unpaid leave they take from work for union duties.

Although Losi said she held no personal grudges in politics, it’s hard to see how Cosatu would reach out to the country’s second biggest federation to establish some kind of workers’ unity – something observers claim is necessary in the light of Cosatu’s flagging membership of 1.6 million (about 600,000 members were lost in the past six years) and in the light of its political struggles.

The South African Federation of Trade Unions was founded by Vavi and others, and after just over a year of existence, already says it has 30 affiliates and 800,000 members.

It reacted sharply to a call during last week’s Cosatu conference for the federation’s unions to return to Cosatu.

The unity of workers is “sacrosanct”, it said in a statement, but added that only eight of its affiliates were former Cosatu unions, and besides, they didn’t walk out of Cosatu, “they were persecuted and dismissed without even a hearing”.

In a letter to Cosatu in May, Vavi wrote:

“President Cyril Ramaphosa has talked a lot about these problems and promised us a ‘new dawn’, but the workers are not going to see that new dawn if he continues to imagine that the capitalist free-market economy is going to turn his words into deeds.”

He listed statistics about illicit financial flows, job losses, and worker-unfriendly laws in the making.

It seems it could take some doing for the two labour federations to find each other.

Losi herself was part of the ‘new dawn’ promise. At the ANC’s conference in December at Nasrec she contested on Ramaphosa’s ticket for deputy secretary general, but lost against Jessie Duarte. She was, however, elected to the ANC’s national executive committee for the first time. Her predecessor also previously served as a member.

While her detractors claimed she liked being close to political power and influence, Losi said she was never close to Ramaphosa, her senior in struggle terms anyway, and her loyalty to workers trumped any loyalty to the ANC.

“There are no permanent friends or enemies,” she said.

“We’re not discussing about the wine that you drank yesterday, but about important issues.”

Cosatu also seems to be keeping its options open – and its members undivided – by both saying it would support the ANC in the 2019 general elections, but also the SACP’s plan to possibly start an alternative party.

Losi didn’t rise to her position on a gender ticket, and denied lobbying for votes at all.

However, Bonginkosi Mrasi, from the NUM’s young workers grouping, made sure she had a platform and said they took the decision “making an analysis on the leadership of Cosatu, the leadership we had before the congress, and checking the challenges we had”.

In these challenges he included the expulsion of Numsa and the drop in the federation’s membership numbers. Losi’s “skill, history and credentials, and how she operates with affiliates” spoke volumes, he said.

In her closing speech to the Cosatu conference, Losi quoted the words of struggle icon Charlotte Maxeke at the second conference of the National Council of African Women in 1938:

“The work is not for oneself. Kill the spirit of ‘self’ and do not live above your people, but with them. If you rise above them, take somebody with you.”

Many delegates applauded this enthusiastically, evidently hopeful that she would not fall. DM