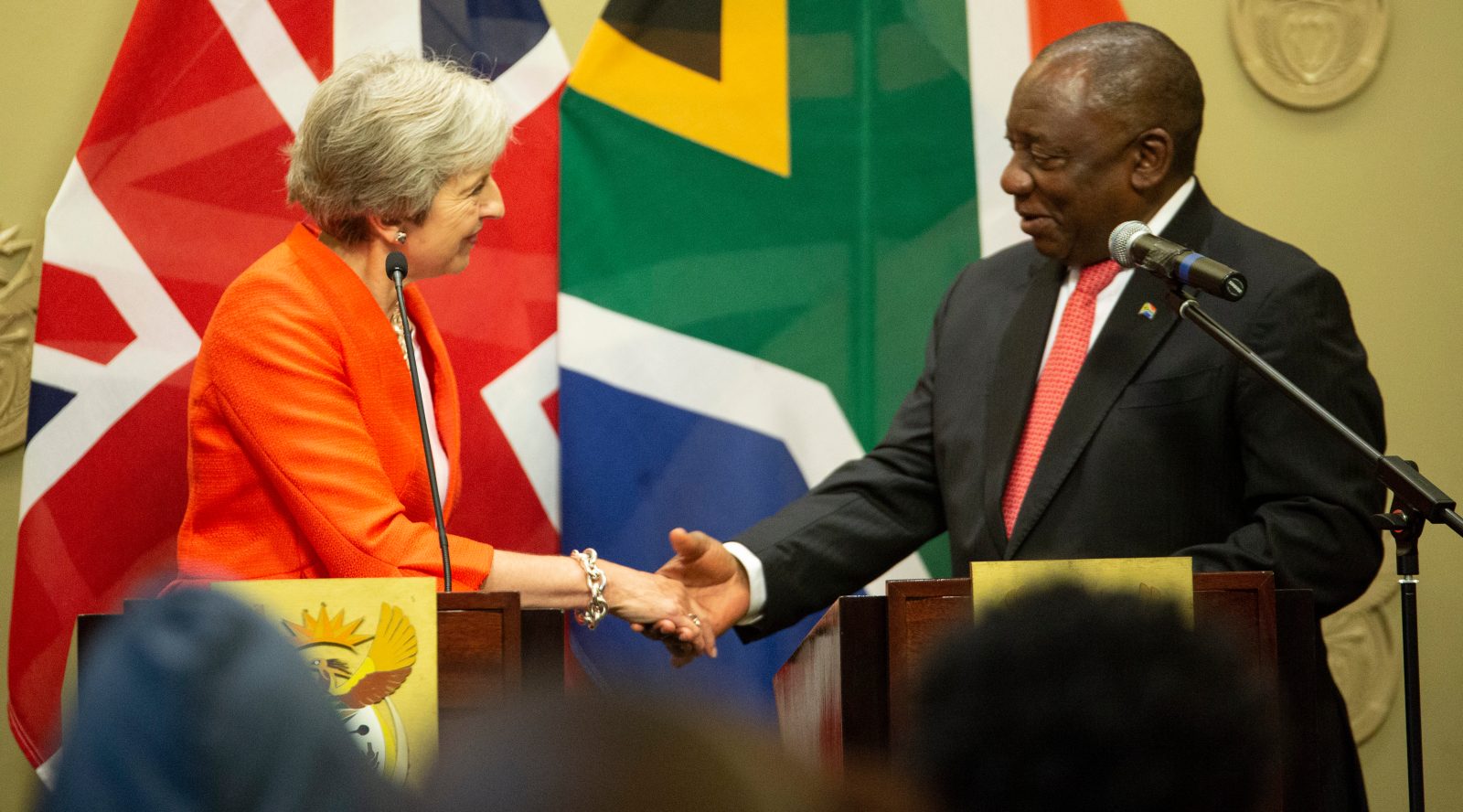 The skilful choreography and symbolism of Theresa May’s lightning visit to South Africa, as part of a three-nation Africa tour, should not be allowed to obscure a big moment in Britain’s shifting foreign policy towards Africa, the European Union and the United States.

Behind the promise of increased trade and investment opportunities post-Brexit, the visit to Nelson Mandela’s Robben Island cell and the ceremonial return of the SS Mendi’s bell, lies a major shift in Britain’s public diplomacy ahead of its phased withdrawal from the EU next year.

If May had done nothing else than endorse President Cyril Ramaphosa’s yet-to-be-revealed policy of fundamental land reform within the law, her visit would have served its purpose in marking the transition from ex-colonial power to trade and investment partner based on mutual need.

May’s support for Ramaphosa, in his hour of greatest need and under siege from white right-wing lobby groups such as Afriforum, populist detractors in his own ranks, Julius Malema’s Economic Freedom Fighters and US President Donald Trump’s unplugged tweets about land seizures and wide-scale killing of white farmers, is a hugely significant gesture and act of state craft.

In contrast, the farming umbrella body AgriSA has begun to play a constructive role following two meetings with the President.

May’s gesture will pull the rug from the lobbyists of the white right, consolidate the emerging national consensus that fundamental land reform is in the interests of stability and help reassure investor fears that South Africa is set on course to become another Zimbabwe or, worse still, Venezuela.

The visit was a triumph for Ramaphosa’s strategic ingenuity and the masterly finesse of British High Commissioner Nigel Casey and his team. British politicians fortunately come and go but there is a quality in the upper echelons of the British civil service which sets the country apart.

As the crunch moment for Britain’s point-of-no-return in its withdrawal from the European Union approaches 29 March 2019, its need to find new trade and investment partners becomes increasingly real; not only to swell the value its two-way trade but also to ensure alternative supplies of essential goods.

Instead of the residual colonial baggage that has bedevilled the UK-SA relationship in the post-apartheid era, the message from Britain is clearly about seeking a partnership with South Africa which would make both the UK and South African less dependent on EU goods with their tariffs and quotas and raise the prospect of a new era based on common interest.

Of course, the EU will remain Britain’s largest trading partner but the withdrawal will open other options and offer the opportunity to re-build relationships with African nations.

Britain needs more bilateral trading partners but at a practical level it also needs the food – maize and citrus for example – and beneficiated products that it wants South Africa to produce in larger quantities. Hence the recent contributions – and future promise – of British aid.

While May’s goal to become Africa’s largest trading partner by 2022 might be somewhat fanciful it nevertheless heralds a new era in Britain’s priorities in Africa. While Britain could well overtake the US in trade with Africa, it is inevitable that China will surpass them both in the next few years with France and Germany not far behind and India and Turkey knocking at their doors.

Britain, haunted for several decades by the prospect of hundreds of thousands of white South Africans arriving at Heathrow airport if the transition went awry, is now more concerned about helping stabilise South Africa with British trade and investment and aid aimed at job creation and poverty reduction for increased security and stability.

And that means more jobs for black South Africans, more investment, educational reforms and development of the agricultural, manufacturing and ailing mining sectors.

And the strategy now includes supporting land reform as advocated by Ramaphosa without drilling down into the details but accepting his assurances that it will not undermine the economy or food security and will build stability.

It is a leap of faith on Britain’s part and an important gesture in building a new relationship of trust built on partnership.

The chemistry between May and Ramaphosa, the foundation for which was laid at their April meeting ahead of the Commonwealth heads of government summit in London, is helping a lot.

The two leaders find themselves in a similar situations having to implement major shifts in policy which threaten to weaken their economies in the short-term in the hope of medium to long-term gain.

German Chancellor Angela Merkel, who was also criss-crossing Africa this week visiting Nigeria, Senegal and Ghana, has an even more urgent vested interest in helping secure jobs and development in Africa to achieve stability that would stem the flow of migrants to Europe which has weakened her position and led to a sharp swing to the right in Europe.

Anti-immigration policies have fuelled the rise of right-wing and far-right parties across Europe and led to at least six right-leaning coalition governments in Hungary, Poland, Austria, the Czech Republic, Slovakia and Denmark, strong secessionist movements in Spain and Belgium and populist governments in Italy and Greece following conflict over fiscal arrangements with Brussels.

Germany, Sweden, Finland have all seen the rise of right-wing parties.

It would not be an exaggeration to say that the dream of a united Europe is under severe strain while the special relationship between Britain and the US, which remains an article of faith out of reach of the prime minister of the day, has been strained to its limits by the tweet-heavy and unpredictable Trump administration.

When British Prime Minister Harold Macmillan made his famous “winds of change” speech in Cape Town in February 1960, it began an accelerated process of decolonisation and independence for African nations which had formed part of the British Empire.

But it meant that Britain could retain its trade and investment ties with its former African colonies more or less on its own terms.

By the time Tory Prime Minister, Edward Heath, took Britain into the then European Economic Community (EEC), forerunner of the European Union, Britain’s main focus of trade and investment switched from the 53-nation Commonwealth to the EU, at the expense of other Commonwealth countries, particularly African nations.

The demise of the Commonwealth, a formidable global network of 53 British colonies plus Mozambique which represented 2.3-billion people more than half of whom live in India, was reflected in the constant budget cuts meted out to the Commonwealth Secretariat in London and its sister business and academic organisations.

There is some regret in British government circles that the Commonwealth today, when Britain really needs it as a trade network, is administratively, at least, a shadow of its former self in the hey-day.

By the time John Major, another Tory Prime Minister, presided over Britain’s decision in 1992 not to join the Eurozone monetary union, the Euro-sceptics had begun to get the upper hand.

Margaret Thatcher, who had begun her political career as a supporter of Britain’s EU membership, became increasingly sceptical and was finally hounded out of office by the pro-Europe lobby in the Tory party.

In retrospect, Britain’s decision to remain within an increasingly overblown and troubled political union, while shunning the Euro currency, was bound to end in tears.

But it took another 14 years before David Cameron, in a last-ditch effort to defeat the Euro-sceptics, called a referendum as prescribed in the Tory manifesto, and the rest is history. In a spectacular act of political hara-kiri he resigned on the spot and handed Theresa May the poisonous Brexit chalice.

May is the first British Prime Minister to visit South Africa for five years. Cameron attended Mandela’s funeral in 2013 but that was a different kind of visit.

Cameron was due to visit again two weeks after the Brexit referendum in June, 2016 but the result scrubbed it. Cameron quit and it has taken more than two years to get the visit back on track, a reflection of the unprecedented domestic political turmoil precipitated by Brexit.

Admittedly, Theresa May, the beleaguered British Prime Minister presiding over a deeply divided country, ruling party and parliament is an unlikely figure to have played midwife to such a significant transition.

Her attempts to lead a middle-path between a soft and hard Brexit have seen the resignation of some of her most senior cabinet ministers, a series of civil servants and made her a subject of lampooning and even contempt in the British media.

Her awkwardness, nowhere more evident than in her admirable efforts to do the Madiba-jive at the ID Mkhize school in Cape Town, is based on the fact that she did not vote for Brexit in the first place and then had to be the leader who implemented the most controversial decision in recent British history.

Judging by the body language between her and Ramaphosa in their brief encounter this week, the South African leader feels more than a passing empathy for her. DM

John Battersby is a London-based author, journalist and consultant. He has observed and analysed UK-SA relations over four decades from both sides.