Ruling party keeps control of Khai-Ma as both ANC and D... 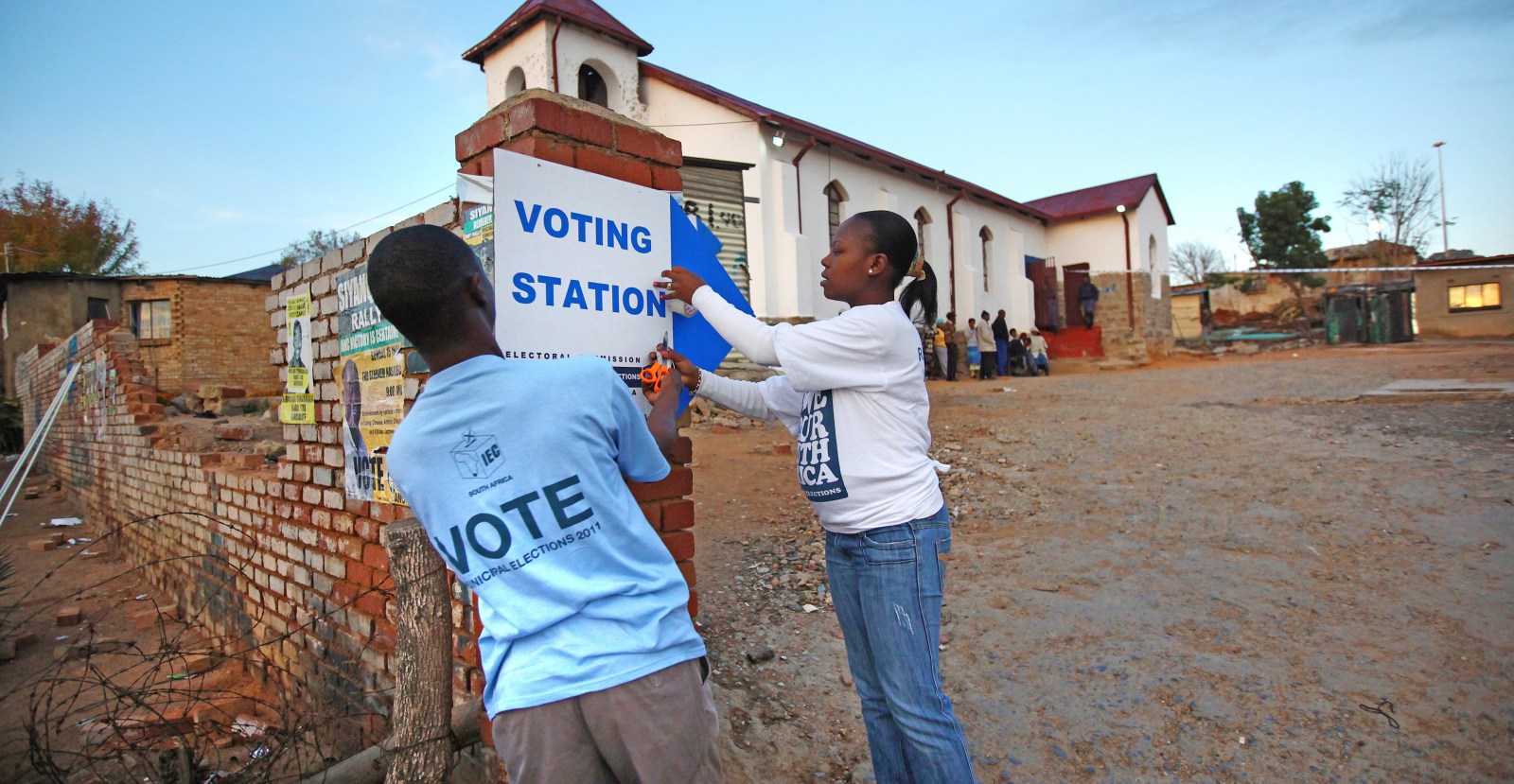 Independent Electoral Commission (IEC) voting officials prepare a voting station for some of the millions of South Africans to vote in the early morning light at a church in the poor slum of Alexandra Township for the local elections, Johannesburg, South Africa, 18 May 2011. EPA/KIM LUDBROOK

The African National Congress (ANC) had to hold the ward being contested in Khai-Ma last night to ensure they kept outright control over this small Northern Cape municipality. They had a solid win here, in a day which also saw them hold a seat in Mbizana in the Eastern Cape and the DA hold a seat in uMngeni in KwaZulu-Natal. In short there was little drama in the latest round of by-elections.

Khai-ma municipality is an ANC controlled municipality in the Northern Cape which straddles the N14 national road with parts of it bordering Namibia. It includes little towns such as Pofadder, Pella and Aggenys. It is part of the Namakwa district municipality.

Ward 1 is centred around the border settlement of Onseepkans. It also includes farms in the district. Onseepkans sits on the Orange River and the town serves as a border crossing between South Africa and Namibia.

While the ANC had a comfortable win here in 2016, they had to take this by-election seriously, as they needed to hold this ward to ensure they kept outright control of this municipality. The biggest threat to the ANC in Ward 1 was the Khai-Ma Onafhanklike Kandidate Koalisie (KOKK), a local party.

The result last night was almost a carbon copy repeat of what transpired in 2016. The only difference was that the EFF received 2% of the vote here last night, slightly reducing the ANC’s percentage share of the vote to 63% from 65%. The KOKK and the DA replicated their showing from 2016. The most competitive voting district in 2016 was the Melkbosrand Community Hall, where the ANC pipped the KOKK by five votes. Last night the ANC increased their majority in this competitive voting district by winning it by 38 votes and getting over 50% of the vote this time round.

The ANC will be very happy with this showing. Turn-out was high at 61%.

The uMngeni municipality is an ANC controlled municipality in KZN which sits next to Pietermaritzburg. Its principal town is Howick, and also includes Nottingham Road, Hilton and parts of the Karkloof Nature Reserve. It is part of the vote-rich uMgungundlovu District in KZN, whose principal town is Pietermaritzburg and also includes parts of the southern part of the province such as Richmond. It is the second most populous district in the province.

Ward 7 includes Hilton, Merrivale Heights which is a suburb of Howick and Khanya village in Cedara.

The DA mirrored their result in Hilton from 2016, again amassing 96% of the vote here, and were able to increase their percentage share of the vote at Merrivale Heights going up from 84% to 89%. They also made slight percentage gains in the ANC stronghold of Khanya village in Cedara. The ANC will be somewhat concerned that turnout at their stronghold of Cedara was lower (42%) compared to the turnout in the DA strongholds which was 54%. The DA will be satisfied with this showing, and will also be relieved that neither the ANC, nor the African Christian Democratic Party (ACDP) were able to make inroads into the DA block of support in their strongholds. Turn-out was a solid 52%.

The ANC had an easy hold here last night but did lose some ground to the EFF and the United Democratic Movement. The EFF had impressive growth at the Mzomtsha Methodist Church voting station where they went from 12% to 31%. This helped them to leap-frog the UDM and finish second in this by-election last night. The ANC’s percentage vote share went down in six out of the seven voting districts in the ward and went up in one of the voting districts. The UDM’s percentage vote share was above 25% in two of the voting districts. The EFF will be satisfied with their showing. They are the official opposition in the municipality but struggled in this ward in 2016. The Socialist Party of South Africa (SPSA) came fourth here last night. Turn-out was 43%.

There will be four by-elections in a fortnight. The ANC will defend a competitive seat in Nala (Wesselsbron), and two safe seats in Tshwane (Soshanguve) in Gauteng and Lekwa-Teema (Christiana) in the North West. The DA will defend a safe seat in Ngwathe (Parys). DM