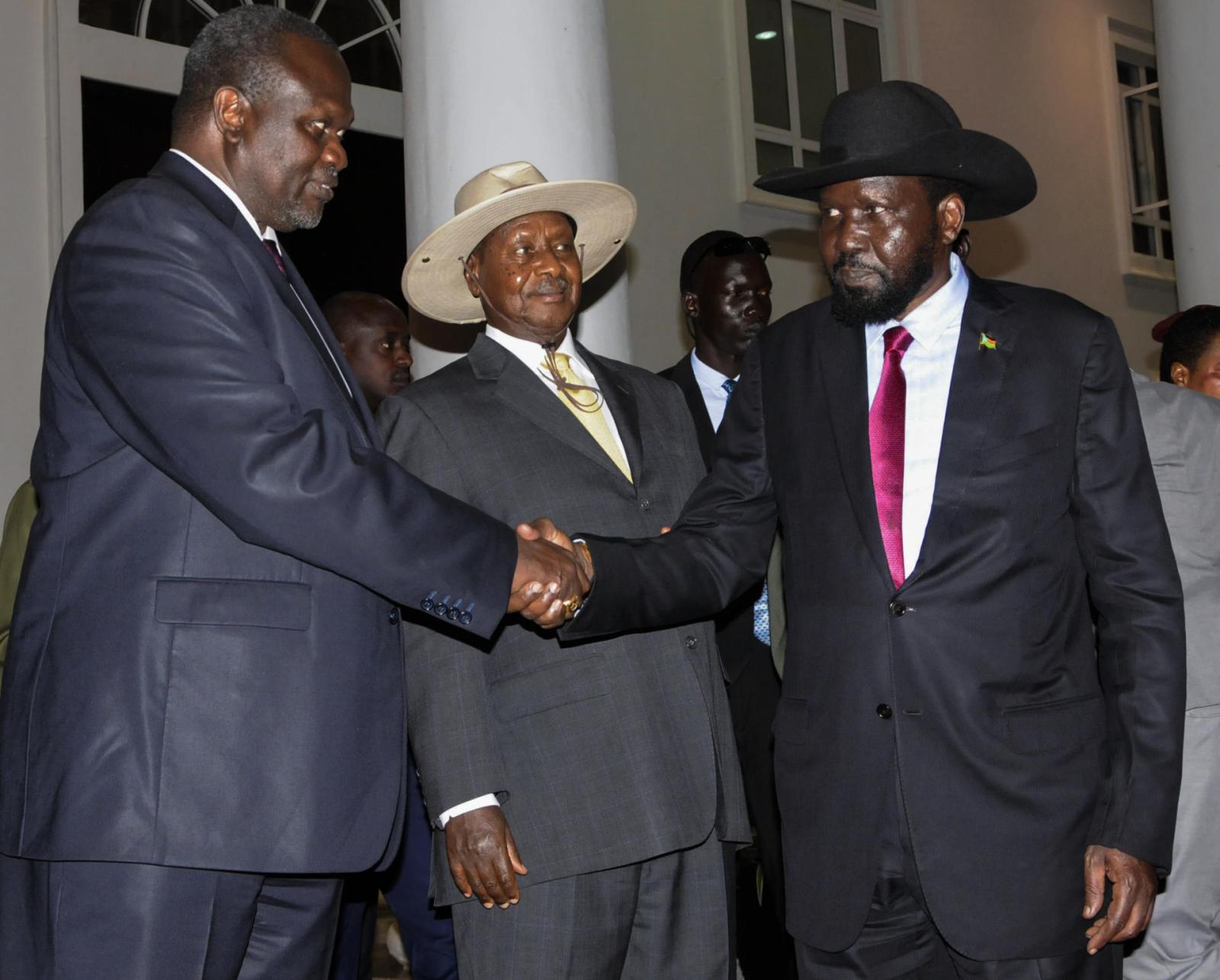 With Ugandan President Yoweri Museveni (C) between them, the President of South Sudan Salva Kiir (R) and the rebel leader Riek Machar (L) shake hands after their meeting in Kampala, Uganda, 07 July 2018. EPA-EFE/STR

Although unpopular, pressure from Security Council sanctions has led to progress and must be sustained. By Meressa K Dessu and Selam Tadesse.

Cautious optimism surrounds efforts to end the brutal five-year civil war in South Sudan. Recent progress in the peace process has led to a permanent ceasefire and power-sharing agreements among parties to the conflict, including the two main rivals – President Salva Kiir’s government and Riek Machar’s rebel group.

Kiir has also offered amnesty to all those who have “waged war against the government”. The progress is largely due to pressure on the country’s armed groups by the international community.

The United Nations Security Council (UNSC) threatened serious measures in May, and after continued violations of peace agreements, it imposed sanctions on 13 July. Measures included an arms embargo to prevent the supply, sale and transfer of arms and related military support to the country. It also included a travel ban and asset freezes on selected individuals.

South Sudan’s ambassador to the UN Akuei Bona Malwal was also of the view that sanctions would undermine the peace efforts. His concern was that the opposition groups would think the Security Council was siding with them, and so would stop negotiating.

However, the purpose of the sanctions is precisely to support the peace process. The goals of the arms embargo, in particular, are twofold: to stop the flow of weapons feeding the country’s violence; and to force the conflict leaders to follow a peaceful path in resolving their differences.

The armed conflict has led to grave human rights violations and mass atrocities against civilians. These include ethnic-based killings, abductions, rape and sexual violence as well as destruction of villages. Serious abuses including crimes against humanity and war crimes are detailed in both the African Union (AU) Commission of Inquiry’s 2014and UN Human Rights Commission’s 2018 reports.

According to the UN, just from April to May this year, at least 232 civilians were killed and 120 women and girls raped. Since the conflict started in 2013, 107 humanitarian workers have died.

The arms embargo passed in July was long overdue. It was first proposed in 2016, but failed to garner enough votes. The Security Council’s warning in May sent a clear message to IGAD that the efforts were not enough.

IGAD increased pressure on the conflict leaders and initiated a different approach to mediation. The IGAD Council of Ministers decided on 31 May 2018 to submit punitive measures on peace process violators, and also recommended a face-to-face meeting between Kiir and Machar.

The two leaders then met in Addis Ababa on 20 June 2018, and again in Khartoum and Entebbe. Since Machar fled the country in July 2016, Kiir had been unwilling to talk with him directly. Various peace initiatives were tabled, but none worked. It’s believed that the Security Council’s warnings caused Kiir to accept the offer of direct talks.

The Kiir-Machar meetings opened the road for further progress. Under the Khartoum deals, agreed on 27 June 2018, five parties including Kiir’s government and Machar’s rebel group signed an accord. This was for a permanent ceasefire, the deployment of regional forces to supervise the accord and the establishment of a self-monitoring mechanism.

These deals build on the 2015 Agreement on the Resolution of the Conflict in the Republic of South Sudan. The various parties to the conflict also signed an agreement on 5 August 2018 in Khartoum on a number of outstanding issues related to governance.

But will the agreements be implemented? And is every facet reachable and realistic? For example, the deal on governance issues includes establishing a government with five vice presidents, 45 ministers and a parliament of 550 members. Can the country afford this?

Experience also shows that the parties don’t have a problem signing agreements – it is the implementation that’s the problem. The permanent ceasefire deal, for example, was violated right after the agreement’s conclusion.

There is also concern that reinstating Machar as first vice president won’t be enough to curb Kiir’s power, recalling that the 2015 power-sharing agreement between the two collapsed in July 2016. This fear is linked to the recent bill that extends Kiir’s rule up to 2021.

Despite these concerns, the sanctions have started working. They at least put pressure on the conflicting parties to accept the peace initiatives proposed by the IGAD mediators. Observers are viewing the progress with hope, but the full success of the sanctions is yet to be seen.

Violation of agreements has become the norm, and the situation could relapse. Success depends on effective and consistent enforcement of the agreements.

The UN Security Council must ensure that there are enforcement mechanisms in place and that through proper monitoring, its decisions are implemented. All UN member countries – especially South Sudan’s neighbouring countries – must co-operate with the sanctions committee and panel of experts. Only then will South Sudan’s peace efforts succeed. DM

Meressa K Dessu is a Senior Researcher and Training Co-ordinator and Selam Tadesse is an Intern, ISS Addis Ababa