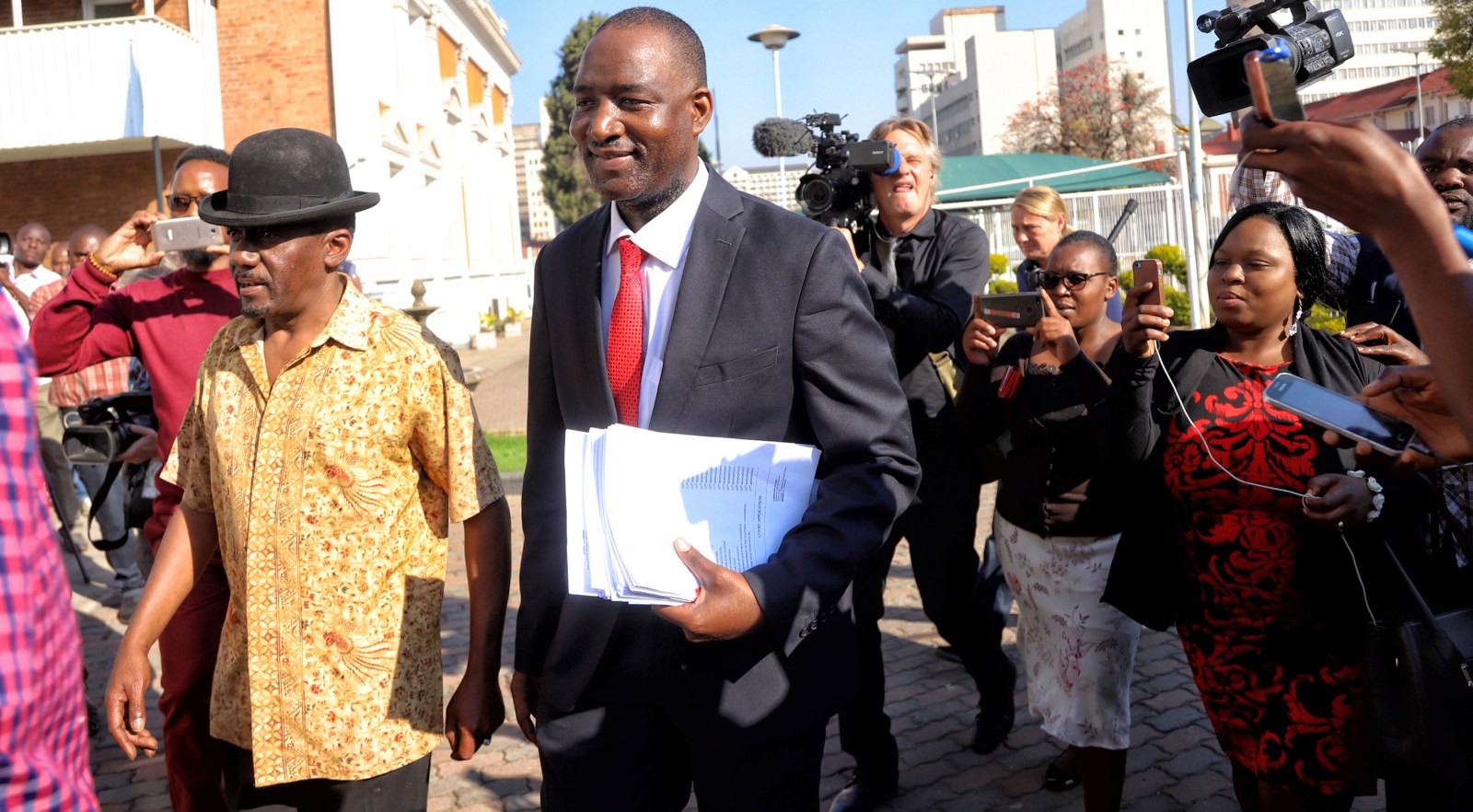 The opposition Movement for Democratic Change Alliance has filed a court application at Zimbabwe’s Constitutional Court contesting the outcome of the 30 July elections, which saw ruling Zanu-PF candidate Emmerson Mnangagwa officially leading with 50.8% against Nels0n Chamisa’s 44.3%.

The court challenge by the Movement for Democratic Change (MDC) Alliance comes as no surprise as it has become tradition for the leading opposition party in the country to contest the results of every election since its inception.

The president-elect’s inauguration ceremony, which was scheduled for Sunday, has since been put on hold as a result of the court application filed by the MDC Alliance contesting the election outcome.

Former MDC Senator David Coltart, who is part of the legal team, told Daily Maverick that if they get a fair ruling, the chances of the MDC Alliance winning the case are overwhelming.

The MDC Alliance lawyer, Advocate Thabani Mpofu, speaking to local and foreign journalist last week after filing the court application, said they have overwhelming evidence that his client, Nelson Chamisa, won the elections and that they were rigged.

In its application, the MDC Alliance is challenging the failure by the electoral body to follow due processes relating to the collation and announcement of results, and that the results announced by ZEC were themselves afflicted by gross mathematical errors.

The petition also cited that the election was conducted under circumstances whereby Mnangagwa disregarded the Electoral Act and constitution, violation of people’s rights, vote buying, use of intimidation and harassment of party supporters, among others.

The independence of the judiciary has been questioned and accused of supporting the ruling party. But the question remains: to what extent has the judiciary changed, such that it will give a fair ruling and one in favour of the opposition party?

“Elections are not won in court, they are won in the field. But if they want to meet us in court we have sufficient legal minds to meet them squarely in court.”

Tony Reeler, a Senior Researcher at the Research and Advocacy Unit (RAU), pointed out that the opposition party since 2000 has filed 38 electoral petitions and not a single one was completed by the end of the subsequent election.

“The courts of law in Zimbabwe have no good record of elections as they are accused of deciding on behalf of the state and not showing impartiality at all,” Reeler said.

However, Reeler added that the merit of the MDC Alliance case can be determined by the extent of whether the evidence they have is enough to prove their case.

“ZEC’s announced official results are consistent with the SBO projections. The percent vote for each candidate as officially announced by the ZEC fall within the SBO estimated ranges,” the statement reads.

As such, the ZESN SBO estimate projected that Mnangagwa was leading by 50.7% against Chamisa’s 45.8%.

However, Reeler noted that the ZESN sample was small, as it uses 750 SBO observers at selected polling stations out of more than 10,000 polling stations across the country, which amount to 6.8% of the sample.

Nonetheless, Reeler has queried the behaviour of the ruling party, stating that if indeed they won, they should be celebrating and not acting in a manner that raises suspicion, citing its heavy-handedness to post-election protests, where the military shot unarmed civilians, leaving six dead and several injured.

Another case in point is MDC Alliance co-principal Tendai Biti, who fled to neighbouring Zambia, fearing for his life. He was deported to Zimbabwe, appeared in court and has since been granted bail.

“If you have won two thirds majority and the presidential vote then one is expected is to celebrate the victory. Why interfere with the process?” Reeler asked.

But the constitution of Zimbabwe does provides in Section 93 that the president can be challenged under the following circumstances: Any aggrieved candidate may challenge the validity of an election of a President or Vice-President by lodging a petition or application with the Constitutional Court within seven days after the date of the declaration of the results of the election.

The constitution further asserts that in determining the application or petition, the Constitutional Court may declare a winner, and invalidate the election, in which case a fresh election must be held within 60 days after the determination or make any another order it considers just and appropriate.

But independent Member of Parliament for Norton in Harare, Temba Mliswa, advises the opposition party that they should not forget that the ruling party still has a two thirds majority.

“I wonder if Chamisa will be ready to preside over the 2/3 Zanu-PF… He will be impeached,” says Mliswa.

The Constitutional court has up to 14 days to hear and determine the court case and its decision is final.

Zanu-PF has since established a 12-member legal team led by Mangwana, the party’s legal secretary. DM