THE ‘HOOKER’ WITH THE BOOKER

Arundhati Roy: ‘It’s safer to be a cow than a woman or Muslim in India’ 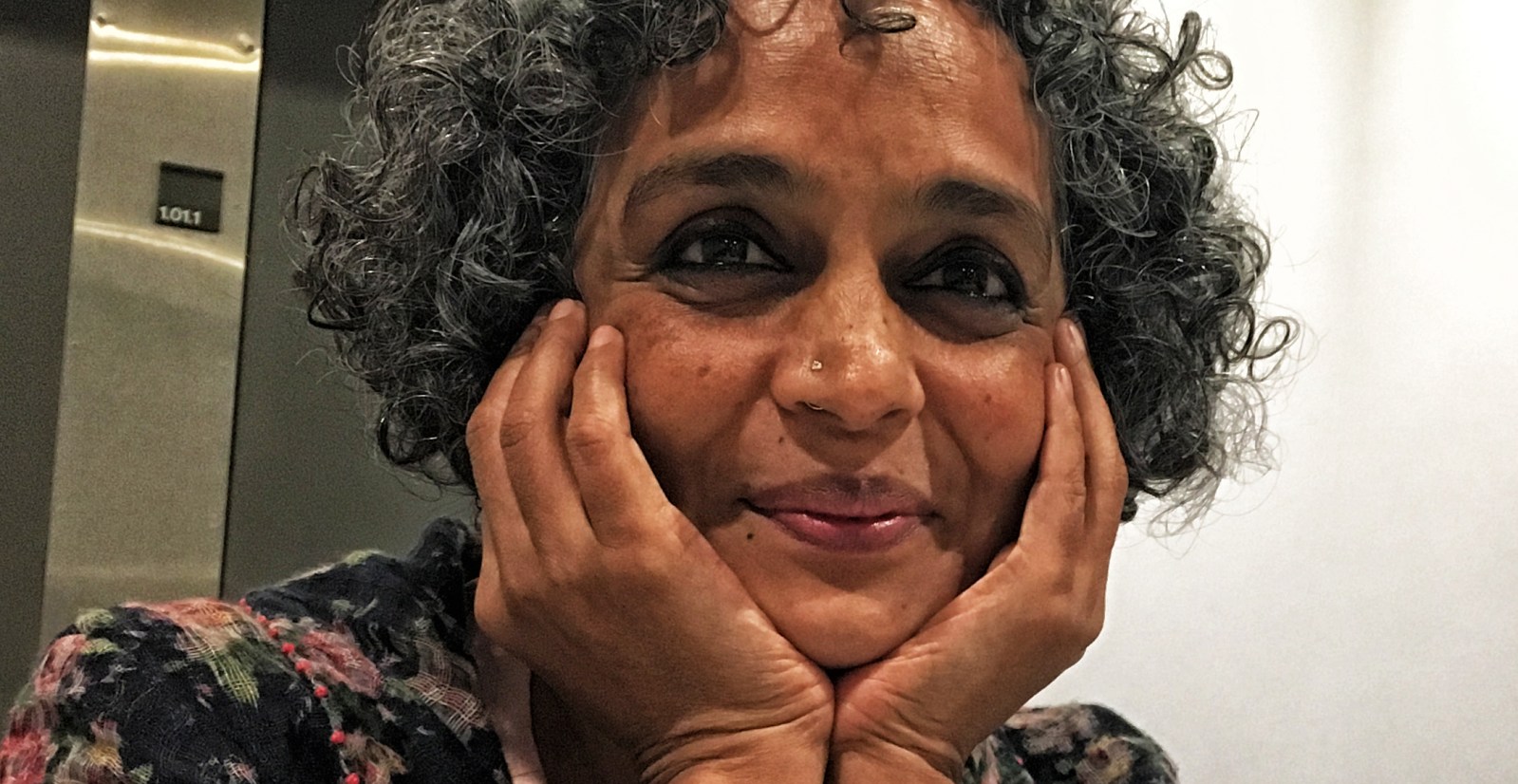 Writer Arundhati Roy is in South Africa to promote her latest novel, The Ministry of Utmost Happiness. But in her homeland of India, fact sometimes outstrips fiction when it comes to stretching credulity – and addressing an audience in Cape Town on Monday night, the famously outspoken Roy slammed the current Indian government as nationalists with blood on their hands.

At the mere sight of Arundhati Roy’s presence, an audience in Cape Town on Monday night erupted into wild applause before Roy had said a single word. If other writers have fans, Roy has something closer to disciples.

Her following exploded worldwide in 1997 after the publication of The God of Small Things – a novel of such astonishing power and richness that it still defies belief that it constituted Roy’s debut outing into fiction. That book brought Roy fame, fortune, and the disapproval of Indian authorities, who accused her of “corrupting public morality”.

“It should have been further corrupting public morality,” Roy says drily now.

Her self-deprecating streak is wide and mischievous; after The God of Small Things won 1997’s Man Booker prize, she jokingly referred to herself as “the hooker with the Booker”.

But the horrified response of Indian leaders to the supposed “obscenity” of her first novel would pale in comparison to what was to come. For close to two decades, Roy set aside fiction writing to focus on powerful, tightly-argued polemics: taking on India’s nuclear weapons programme, the threat of globalisation, the human and environmental cost of capitalism, and a host of other subjects destined to put her at loggerheads with those in power.

Roy is, to say the least, not a favourite of the current Indian government.

Roughly every five years, she says, a clutch of male lawyers concoct a new batch of charges with which to nail her. Roy’s support for the independence of Kashmir almost saw her face sedition charges recently. Outside of courtrooms, she is routinely accused of shaming and misrepresenting an India desperate to present a polished, democratic face to Western markets.

Her public events in India are often heckled and disrupted – one reason, she says, why she is doing minimal publicity in her own country for her long-awaited second novel: 2017’s The Ministry of Utmost Happiness.

Roy’s outspoken stance on issues of social, economic and environmental justice has seen her garlanded with international awards, but Roy is far too contrary to fit into conventional moulds of global advocacy.

Talk about “human rights” to her at your peril – she hates the term, dismissing it as NGO-speak for what should rightly be termed “justice”. For international NGOs she has little love, suggesting that global funders will support causes or groups “as long as you’re not doing anything to question the economic superstructure”.

She’s also not a fan of the “activist” label, though she has been a boots-on-the-ground participant in Indian protest. Roy prefers to see what others term her “activism” as a no-brainer element of what writers should do in the world.

She believes there is no such thing as an “apolitical” novel – and The Ministry of Utmost Happiness makes no pretences in this regard. A sprawling tale of post-partition India which takes us from the marginal world of Delhi’s intersex and transgender hijra population to the fight for the independence of Kashmir, Roy’s second novel is breathtaking in its scope.

But while Roy’s lyrical – and often comic – mastery is on full display once again, The Ministry of Utmost Happiness also presents the reader with the unvarnished reality of an India devastatingly fractured along the lines of caste, religion, class and politics.

In Cape Town, she compared India’s prevailing caste system to a less overt version of apartheid society. Members of India’s most powerful castes listed by Roy include Mahatma Gandhi – she is, euphemistically, not a Gandhi admirer – and “your friends the Guptas”.

Low-status castes have been sidelined by government, and in India’s official narrative, to the point where “the poor only exist in NGO pamphlets”, Roy said. Evidence of this is found in popular culture as well as government policy: if one studies the trajectory of Bollywood movies, says Roy, the films are “increasingly made for the rich”.

A state-sanctioned crackdown on Islam is also a source of increasing pain to Roy, as is the seemingly unstoppable war on Indian women’s bodies.

In a country ruled by Hindu nationalists, says Roy, “it’s safer to be a cow than a woman or Muslim”.

Politics and violence are inextricably connected in contemporary India; to the point where, in Roy’s words, “massacres co-exist with elections” and “democracy rolls in on a blood-stained carriage”.

The Indian government’s acceptance – or even encouragement – of violence between Hindus and Muslims is not just morally bankrupt, says Roy, but also leading the country down a path towards catastrophe.

“Once you start lighting a fire of hatred,” the writer told her Cape Town audience, other fires begin to spark all over – “and they won’t go out for a thousand years.”

Yet despite her fears for her homeland in the current climate, Roy remains a believer. The Ministry of Utmost Happiness is steeped in empathy for even the characters who Roy would, in real life, consider her political foes. She gathers hope, she said on Monday, from the evidence of young people trying to make connections across old divisions.

For the defence of justice to succeed, in Roy’s view, “you have to find solidarities”.

If Roy’s second novel has a darkness at its heart that is more acute than that on display in her first, it is a reflection of the society she attempts, above all, to reflect truthfully.

Those who cannot bear very much reality currently may console themselves by returning to two of the most-quoted lines from The God of Small Things:

“Another world is not only possible, she is on her way. On a quiet day, I can hear her breathing.” DM