For the fourth consecutive month, Islamic places of worship in SA have been targeted with violence 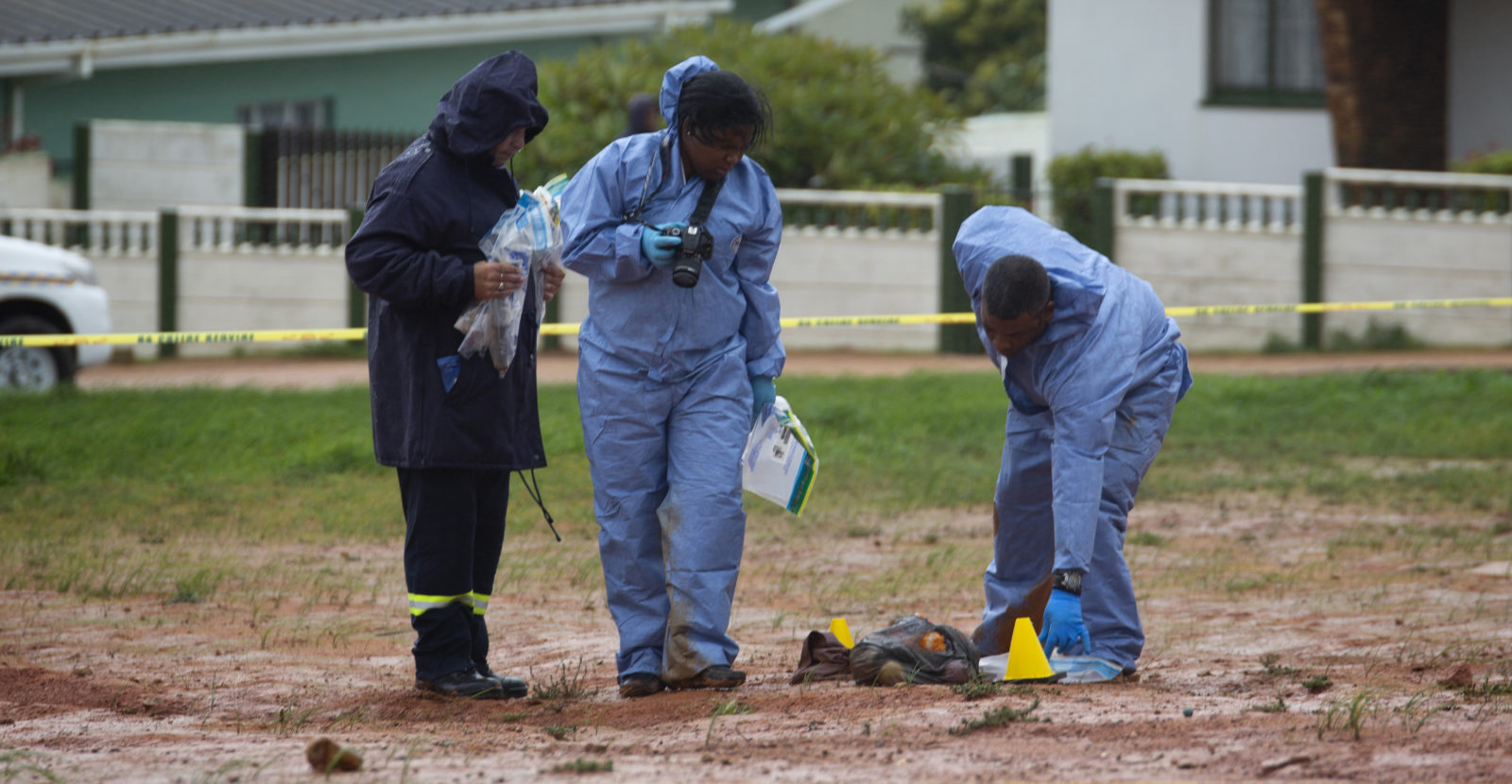 Two people were killed and several injured in a moque attack in the early hours of Thursday 14 June 2018 in Malmesbury, Western Cape. The suspect was armed and after having fled to a nearby field, was fatally shot by police. Photo by Leila Dougan

Three months since the deadly attack on a mosque in KwaZulu-Natal, no arrests have yet been made and no updates are available from the Hawks. In the last three weeks, meanwhile, there have been three further incidents at places of Islamic worship in South Africa: two apparent arson attacks and the placement of one hoax bomb. Add to this the possible link between the original mosque attack and the explosive devices found in Durban stores in July, and you have an ongoing mystery that authorities seem at a loss to explain.

Shortly after morning prayer on 25 July at the Musjid-E-Moin, the entrance to the Chatsworth mosque was deliberately set on fire.

Local KwaZulu-Natal newspaper the Rising Sun Chatsworth reported that worshippers ran to grab a hosepipe in order to douse the flames – only to realise that the hosepipe had been removed. With the aid of buckets of water, they were able to extinguish the fire and limit the damage.

A witness claimed to have seen three men fleeing from the back of the mosque, but no arrests have yet been reported by police.

The motive is officially not known, though the mosque’s moulana Yusuf Matola appeared to have some theories of his own.

“Something is going on that we have no knowledge of and there is someone behind the attacks with a vested interest,” Matola told the newspaper.

“People have been boycotting the prayer due to wanting power at the mosque and there has been conflict going on for about two years, and we believe that this may be linked to the reason behind the attacks.”

Less than a week later, a man was taken into custody in Roshnee, near Vereeniging, under suspicion of trying to plant a bomb at the Masjid Taqwa mosque.

“There was a white gentleman who came into the mosque on Monday evening [30 July] and left his bag there,” Roshnee Neighbourhood Watch’s Ebrahim Sujee told Daily Maverick.

“On Tuesday morning we found the bag and, upon inspection, we found a suspicious looking device inside.”

When the man in question returned to the mosque, he was handed over to the police. Police spokesperson Fikile Funda confirmed to Daily Maverick that a 36-year-old white man had been taken into custody. Funda did not comment on Sujee’s claim to Daily Maverick that “some anti-Islam literature” had also been found inside the man’s bag.

After testing, however, the device in question was revealed not to be a bomb. The unnamed man was still charged with “possession of a hoax bomb”.

Eight days later, the Sayed Mahmud mazaar (shrine) in Constantia was set alight in the early hours of the morning of 7 August.

A statement from the Muslim Judicial Council stated that “two men asked to enter the premises to perform Fajr Salaah (morning prayers) at the mazaar. When the caretaker came out of his house, he saw the mazaar on fire. The perpetrators fled the scene.”

Police did not respond to a request for comment from Daily Maverick as to the status of this investigation.

In this instance, however, there was one potential clue as to a possible motive behind the attack. The media arm of the Cape Town Islamic Educational Centre reported that one particular element of the shrine – the Raqam of Madina, a depiction of the dome above the grave of the Prophet Mohammed – was smashed and burnt “specifically”.

Questioned as to the possible significance of this, a Muslim cleric who wished to stay anonymous told Daily Maverick that certain conservative strains of Islam disapprove of structures above graves, as well as the practice of visiting shrines for worship.

One commenter on the Muslim Judicial Council’s Facebook page appeared to express a similar view in response to news of the attack on the shrine.

“Because we live in a secular democracy we are duty-bound to obey the law of the land regarding religious tolerance, but in an Islamic state these idol-worshipping structures will be destroyed.”

In apparent response to comments like these, the Cape Town Islamic Educational Centre subsequently posted the following message on Facebook:

“Visiting kramats (graves) and mazaars are 100% in accordance to the Holy Qur’an… So don’t concern yourself about the opinions of non-befitting Muslims who want to put their cheap and baseless opinions of condemnation in front of the most valuable permission of Allah.”

Among these three latest South African incidents targeting Islamic places of worship there appear to be very few common threads visible. All three took place in separate provinces – KwaZulu-Natal, Gauteng and the Western Cape. Two occurred in Sunni mosques; one at a shrine.

If the moulana of the Roshnee mosque is to be believed, the motive for that arson attack may have been rooted in a power struggle within the mosque’s community. When it comes to the hoax bomb at the Vereeniging mosque, rumours of the discovery of anti-Muslim literature have fuelled the suspicion that the motive may have been Islamophobic. The attack on the Constantia shrine, meanwhile, may potentially be due to sectarian tensions.

Although these types of incidents are rare in South Africa, it might just be possible to chalk the three up to random, unrelated acts which coincidentally occurred within a few weeks.

What complicates the picture is the fact that the three most recent cases come on the back of two deadly attacks on mosques in KwaZulu-Natal and the Western Cape in May and June.

For four consecutive months in 2018 – from May to August – South Africa has seen Islamic places of worship targeted in acts of violence and destruction.

A further factor may be the ongoing mystery of explosive devices placed around Durban in July, which bore a marked resemblance to a device found at the first Verulam mosque attack in May.

It is worth stressing how uncommon violent attacks on mosques in South Africa have been in recent years. Before May 2018, the last incident to capture headlines saw a Cape Town mosque defaced with the blood and snout of a pig in January 2017.

When the Hate Crimes Working Group released its first report into South African hate crimes in February 2018 – the first attempt to record local hate crimes in a systematic manner – it found that only 14% of such incidents between 2013 and 2017 were based on religious hatred, without disaggregating the data for Muslim-targeted incidents. Arson, meanwhile, accounted for less than 1% of all incidents.

Arson attacks on mosques have, however, spiked internationally in the last two years in the USA and Europe. The motive for the vast majority of these has seemed to be Islamophobia. A 2017 report by the Organisation of Islamic Co-operation listed tensions around migration, the election of Donald Trump as US president and the rise of European populism as contributory factors.

Between January and July 2017, the Council on American-Islamic Relations recorded on average nine “incidents” – threats, vandalism or arson – per month at US mosques. This was an increase of over 26% when compared with the same period the year before, prior to the election of Donald Trump.

In South Africa, however, there has been no convincing evidence of a corresponding rise in Islamophobia over the past two years which could satisfactorily account for the spike in mosque attacks.

As Daily Maverick previously reported in our coverage of the Verulam mosque attack, however, there has been a distinct escalation in sectarian tensions locally over the same period.

This echoes what has been happening in the West over the same period, wrote researcher Parveen Akhtar in response to two murders in Britain in 2016 motivated by sectarian hatred.

“This sectarianism within Islam in the West is a recent development and can be traced to two key factors,” wrote Akhtar. “Greater diversity of those Muslims settling in Europe and the mobilisation of sectarian divisions via the internet.”

The latter factor certainly holds true for South Africa too, with conservative websites like the Port Elizabeth-based Majlis using the online space to disseminate hate-filled rhetoric against those it sees as enemies of Islam.

Thus far, 2018 has been a year of uncertainty and concern for local Muslim authorities and local mosques – whose open-door policy appears to have been tragically exploited. In the ongoing absence of any breakthroughs from police, fear will surely linger. DM

All eyes are on the first US presidential debate, as the country battles new coronavirus infections

An Wentzel
Save 2 mins