Are train fires random cases of arson or sabotage? 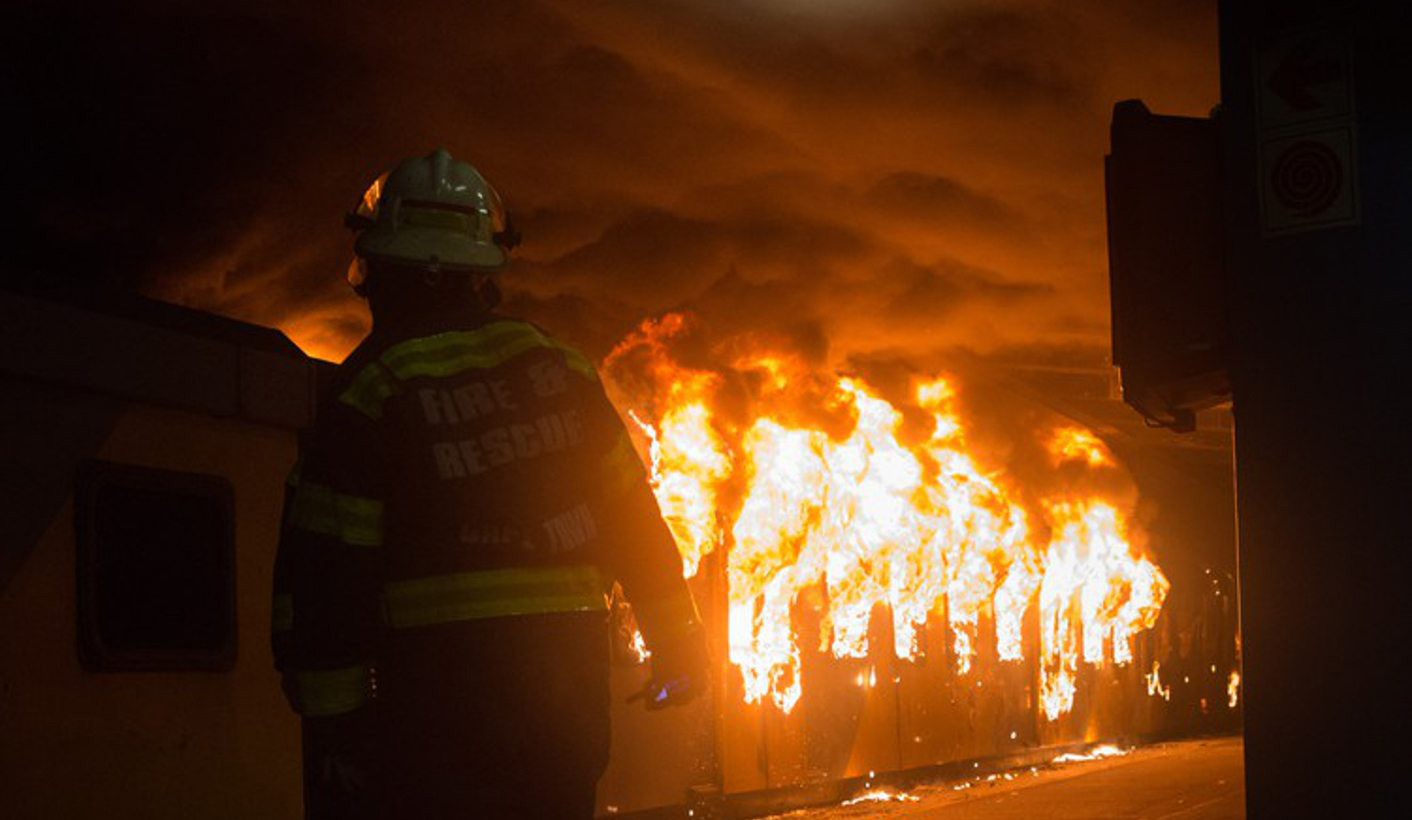 The recent spate of train sabotage through arson in Cape Town must be recognised as a national disaster and needs to be treated as an emergency.

On the morning of 30 May 2018, Leanne Jansen boarded a train at Southfield Station on the Southern Line in Cape Town. She was on her way to work. Near Ottery Station, the carriage of the train was engulfed in flames. A woman commuter was killed in the fire, her body burnt beyond recognition. Jansen only survived because she broke a train window and jumped from it with third degree burns across her body. Three other commuters were also injured. Two carriages were destroyed in the fire and tens of thousands of commuters delayed or left seeking alternative transport.

The recent spate of train sabotage through arson in Cape Town must be recognised as a national disaster and needs to be treated as an emergency.

One death is too many and that’s how many there have been in the arson attacks that have been ongoing since May. Much can be said about the economic cost that these attacks are causing. But fact of the matter is the lives of children, women and men are at risk unless President Cyril Ramaphosa demonstrates leadership through action.

The total cost of these recent arson attacks is estimated to be about R50 million, money which should be spent on fixing the trains.  What should be an ordinary act of commuting to work or school, has become even more dangerous due to these systematic attacks that can only be described as terror for commuters.

There have been six arson related sabotage attacks since May, with the clear intention to destabilise Prasa in Cape Town even further. According to various reports, there are currently only eight functioning trains on the central line and only 37 servicing the whole of the Metro. We have noted that Metrorail is now offering R25,000 reward for information that leads to a successful conviction. But there is still much more that needs to be done.

There is notably a spike in rail sabotage when there are leadership issues at the SoE and when corruption is challenged in Prasa. There was a similar pattern of train fires in 2015 that just happened to coincide with the Public Protector’s report Derailed which exposed the former Prasa CEO Lucky Montana and a corrupt criminal network inside the rail agency. Therefore, the probability that these most recent attacks is linked with the attempts to expose state capture at the SOE is significant. This is the view of #UniteBehind.

In January 2018, #UniteBehind wrote a letter to Prasa to express concern about their decision to promote Mthura Swartz, despite legal advice by their attorneys to suspend him. He was promoted to the position of Acting CEO in the Prasa Rail Division. Swartz has held numerous positions at Prasa including Regional Manager for Western Cape as well as Executive Manager for Mainline Passenger Service.

There are cases of corruption, nepotism, sexual harassment and intimidation that Swartz had to answer in December 2017 based on legal advice from Prasa attorneys. Swartz is also the subject of an ongoing investigation by the Public Protector for a range of unlawful activities. Provisional findings against him were of maladministration and irregular recruitment. Swartz was removed from his position of Prasa Acting Rail CEO in April after a new board and Minister had been appointed.

This is also someone who was found guilty of eight charges of after an irregular tender during his time at the City of Cape Town.

In the Public Protector’s report on Prasa one of the issues mentioned was irregular recruitment process. A particular incident took occurred in 2012/13.

According to C Dire, former Recruitment and Selection Manager at Metrorail: “It involved the creation of the trainee protection officials and their recruitment and selection. Meetings were called by Mr Swartz and attended by herself and/or Mr Themba Jack. There were no written submissions furnished in respect of these appointments and terms of reference came directly from Mr Swartz. These were very junior positions and there appears to be no record of the short listing and interview process, but appointment letters were issues. Swartz as the former Regional Manager should not have been involved. The trainees were appointed at a higher scale and there were an over appointment. She alleged that the appointment was both an act of maladministration and resulted in irregular expenditure.”

There is a pattern of irregular practices and intimidation here.

The Eastern Cape Hawks have inexplicably stalled their investigation of Swartz for his alleged involvement in the theft of rail lines and sleepers in Elliot in the Eastern Cape in 2013. Several people were caught stealing sleepers in January 2013. The suspects produced a letter of authorisation with an employee code on it, a Metrorail scrap form, a request for used rail form, and a map on the country’s rail network. The police, however, did not state that Mr Swartz was a direct suspect in the case but all the questions they directed at Prasa management implicated him.

At the recent “stakeholders” meeting called by Minister Bonginkosi Blade Nzimande to address the arson-related sabotage unions and a so-called commuter organisation ignored the attacks on commuters and instead praised Mthura Swartz. They called on the minister to remove Regional Manager Richard Walker. For Swartz his hearing takes place this month and his faction is powerful in this region. The new Prasa Board and management aims to eradicate corruption, stabilize the rail agency and improve rail services. The corrupt state capture network inside Prasa can only benefit from its destabilisation.

Prasa leadership and the public must not be distracted by Swartz and the corrupt elements in the organisation. They have a duty to address the sabotage and eradicate corrupt networks.

As a blatant attempt to highlight how well-organised and brazen these attacks are, one of the most recent ones took place the day after Minister Nzimande visited Cape Town station to discuss the sabotage. At the meeting that took place last month, Minister Nzimande suggested an Imbizo for 8 August. We don’t need more imbizos Minister Nzimande, we need action and we need it urgently.

These systematic attacks need to be dealt with a real urgency that we are yet to see from government. A national disaster in commuter rail must be declared in order to unlock additional state funds to prevent further damage.

#UniteBehind is calling for unified action between the relevant authorities, including Prasa, local government, national government, SAPS, the Directorate for Priority Crime Investigation (Hawks) and the National prosecuting Authority; forensic units to find those responsible for these acts of sabotage; daily updates on progress, communicated across all channels to commuters; a dedicated monitoring room to track incidents and actions as well as a specialised and trusted police units to support the interventions.