While acting President David Mabuza was taking care of the country at the weekend while President Cyril Ramaphosa attended the wedding of his son Andile in Uganda, the world’s most respected newspaper, The New York Times, published an in-depth and devastating investigation of how the country’s Deputy President allegedly siphoned off millions from Mpumalanga schools to “buy loyalty and amass enormous power” in the party.

Donald Trump might have fingered the New York Times as a purveyor of “fake news” but the The Gray Lady (as the NYT is often referred to) has won 125 Pulitzer prizes and is widely regarded as the most influential daily newspaper in the world.

Which is why one would have imagined that ANC, President Ramaphosa, or his government at least, would have been roused to swift action in an attempt to mop up the considerable reputational damage not only to Mabuza, but the governing party, the ANC-led government and South Africa itself.

The New York Times investigation by Norimitsu Onishi, seasoned NYT Johannesburg bureau chief, and journalist Selam Gebrekidan, titled “South Africa Vows to End Corruption. Are Its New Leaders Part of the Problem?”, was published prominently on Saturday on page one and continued inside including a two-page spread of photographs.

It is a damning portrait of Mabuza, who is revealed as a power-hungry, corrupt man who bought loyalty and his leadership in the party. Mabuza declined to be interviewed for the piece, as did President Ramaphosa.

Mpumalanga province, said the NYT, had become known “as one of South Africa’s most dangerous. Nearly 20 politicians, most from inside the A.N.C., were assassinated in the past two decades, some after exposing graft in public works projects”.

By Monday evening, two days after publication of the devastating investigation, not a peep from the ANC, Mabuza’s office or anyone else.

But not making metaphorical eye contact with the NYT and pretending that the investigation will not affect how South Africa is viewed by the international community will not be viewed positively. Even a simple “we have noted the claims and will investigate” might have held back the negative tide for a while.

Instead, over on Twitter, the governing party’s @MyANC account was posting pictures of President Ramaphosa’s breakfast with former President Mbeki and ANC national officials meeting with the executive committee of the Premier Soccer League Executive over at Luthuli house. The account also tweeted about Pule Mabe’s appearance on eNCA to “ unpack #ThumaMina following a successful countrywide rollout over the past weekend”.

Daily Maverick’s emails and WhatsApp messages to Deputy President Mabuza’s office as well as ANC national spokesperson, Pule Mabe, with regard to whether the government or the ANC would be issuing a statement in reaction to the serious allegations in the NYT piece, were met with silence.

An attempt to contact ANC Secretary-General Ace Magashule also disappeared into a void.

The Hawks and the NPA too appear to be distracted (or not) elsewhere with the mounting pile of evidence of State Capture.

So what did Onishi and Bebrekidan find?

First up, the journalists claim that Mabuza, as Mpumalanga Premier, had siphoned off money “from schools and other public services to buy loyalty and amass enormous power, making him impossible to ignore on the national stage and putting him in position to shape South Africa for years to come”.

Under Mabuza’s leadership, wrote the journalists, millions earmarked for schools in Mabuza’s province “have been misspent year after year, according to the national government. His province routinely spent less on poor students than required, and school construction projects have been riddled with inflated costs, government records show”.

Funds had also “disappeared into a vortex of suspicious spending, shoddy public construction and brazen corruption to fuel his political ambitions, according to government records and officials in his party”.

“Nearly a quarter of the primary schools in Mr. Mabuza’s province still have only dilapidated pit toilets, despite ample government funds to fix them. And during his tenure, his province was caught fabricating the passing rates on the annual national exam, enabling him to claim big leaps forward that never happened.”

Over on Deputy President Mabuza’s Twitter timeline, in the meantime, are pics of the former premier, looking comfortable in orange overalls, flanked by Mpumalanga Provincial Government officials on 18 July, Mandela Day, showed him handing out “school uniforms to the needy, and sanitary towels to girl learners. This, we are doing to ensure their dignity.” 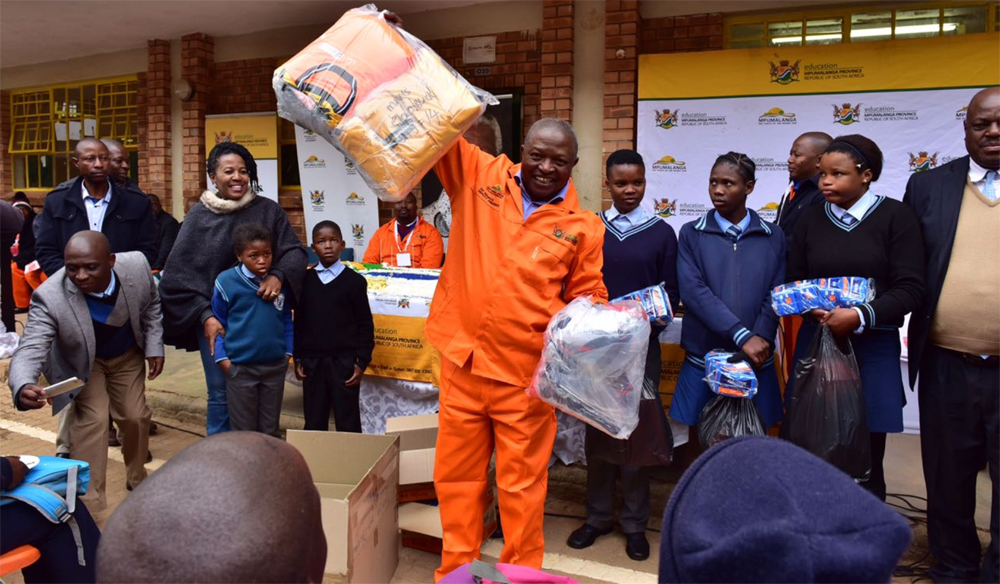 The NYT wrote that Mabuza’s political career in the small province flourished as he attracted “legions of new A.N.C. members with government contracts, cash handouts and even KFC meals, according to current and former party officials”.

“His sweeping recruitment drive turned his relatively insignificant province into the A.N.C.’s second-biggest voting bloc. Under the party’s delegate system, his territory became more influential than even Gauteng, the province that includes Johannesburg and Pretoria, with a population three times the size and an economy nearly five times as big.”

Mabuza’s tainted legacy, said the NYT, “casts doubt on the legitimacy of the new government and its bold assertions that the A.N.C. is turning the page on corruption”.

The journalists quote Sandile Sukati, who recruited Mabuza, then a teacher, to build anti-apartheid networks inside South Africa after the 1976 uprisings.

It was only after the country’s first democratic elections that Mabuza “quickly ran into trouble “leading to the province’s first big scandal”. Three years after Mabuza had been appointed MEC of Education in the province schools began to perform badly.

“Mr. Mabuza was feeling the pressure, particularly as powerful A.N.C. leaders returned from exile, often with military credentials that overshadowed his own, several current and former A.N.C. officials said.”

But the following year “brought a stunning improvement. The passing rate inexplicably jumped to 72 percent — an incredible turnaround that catapulted Mpumalanga to No. 2 among the nation’s nine provinces.”

The journalists quote Mr Sukati, now a senior official in the education department, as saying he was suspicious of the sudden sterling performance in the province.

“A whistle-blower exposed the cheating a few weeks later. The real passing rate, the authorities announced, was under 53 percent. Moreover, the doctoring had taken place inside Mr. Mabuza’s residence, where he met with a small circle of bureaucrats, some of whom were later fired, current and former A.N.C. officials said.”

The investigation was never completed and Mabuza “never admitted wrongdoing or suffered any significant consequences. Dropped as education minister, he was named head of housing instead”.

In 2009 Mabuza was appointed by President Jacob Zuma as Premier of Mpumalanga and at the ANC’s elective conference at Nasrec in December 2017 Mabuza pulled off the greatest double-cross, supporting Ramaphosa’s slate instead of that of Nkosazana Dlamini Zuma – primed to be Jacob Zuma’s successor as leader. It was Mabuza who delivered a hollowed-out and bought ANC to Cyril Ramaphosa.

Collen Sedibe, a former ANC leader who grew up with Mabuza and who worked with him, explained to the NYT how the premier concentrated power in his office, establishing a “Rapid Implementation Unit” and stripping authority from local officials.

“That’s how he managed to loot,” Sedibe told the journalists.

The report claims that Treasury officials in the province are investigating the irregular expenses incurred during Mabuza’s term as premier.

If there is a shadow that darkens Ramaphosa and the ANC’s “new dawn” it is individuals in the party like Mabuza who have “outsize’ influence over the governing party and its future, which is inexorably tied to that of South Africa.