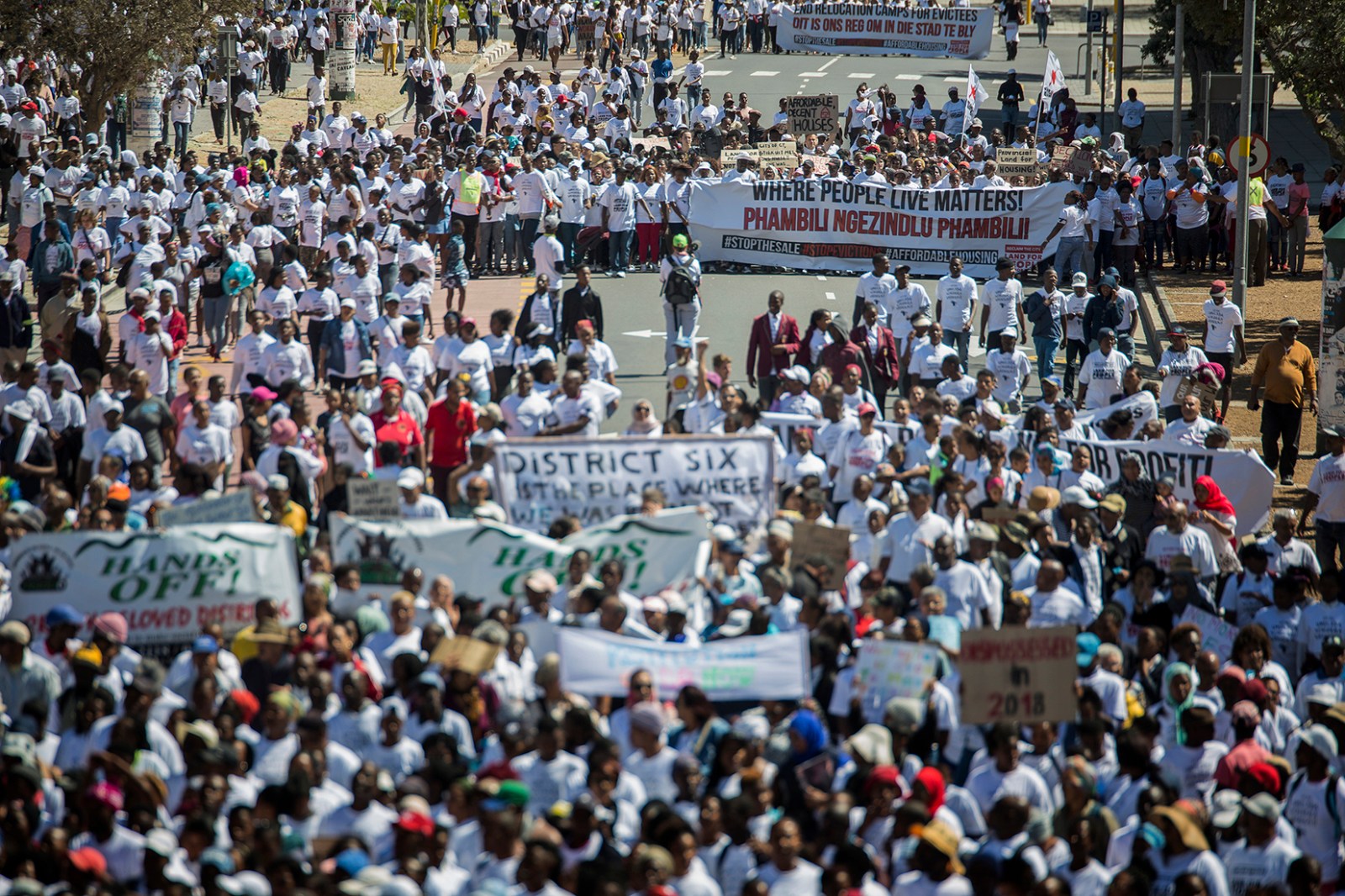 Land dispossession has significantly threatened livelihoods and food security, contributing to a burden of disease. These factors set up health inequities in a context of disabling poverty.

South Africa’s unresolved land question breeds various inequalities and continues to position indigenous landless people in the margins of society, characterised by a persisting burden of disease, poverty and disability.

Various authors in 2006, 2009 and 2016 issues of The Lancet discuss extensively how the health status of dispossessed people has significant disparities compared to people who own and control land (Ohenjo et al. 2006; King et al. 2009; Gracey & King 2009; Anderson et al. 2016). Despite the overall improvement of health outcomes related to the 15-year push of the Millennium Development Goals, the persistence of inequalities remains and has even worsened in some countries (Heineke & Edwards 2012; Kabeer 2016).

The worsening status is no surprise considering that inequalities systematically worsen, as Ohenjo et al. (2006) argued, in contexts where loss of natural resources and land results in inability to sustain traditional livelihoods, culture, knowledge and institutions.

In South Africa, the picture is similar with stark social inequities which translate to a high burden of premature mortality and marked health inequities as reported in the 2017 South African Health Review by Vera Scott and co-authors. Similarly, Massyn and co-authors reported in the 2014/2015 South African Health Review estimates of infant mortality rate (IMR) from the 2011 Census in the predominantly rural Eastern Cape Province as 40.3 per 1,000 live births – doubling that of the Western Cape which had an IMR of 20.4 per 1,000 live births.

For instance, the top three causes of disability adjusted life years in 2010 were HIV/Aids, diarrhoeal diseases, and interpersonal violence which are all also causes of age-premature mortality. The causes that were in the top 10 leading causes of disability adjusted life years in 2010 and not 1990 also included HIV/Aids, diabetes mellitus, and major depressive disorder. Mental illness also accounts as the most common cause of disability, with mental illness responsible for 23 percent of years lived with disability.

The rates of suicide, mental distress and violence mean we need to look at how mental health is influenced by effects of landlessness and the continuing stressors of colonisation, imposed sedentary lifestyles and inferior self-image all of which leave landless people with very little autonomy over their lives.

These factors have been linked by indigenous scholars to high rates of depression, alcoholism, suicide, and violence in many dispossessed communities, with the most pronounced effect on youth. As such, violence accounts for 20 percent as one of the leading causes of disability – which is head injury. Violence and injury also remain part of the leading causes of the burden of disease in South Africa (Massyn et al. 2015). Similarly, the imposed sedentary lifestyles amongst the landless position people within working-age at high risk for strokes which are also a major cause of illness and disability.

Akinyemi and co-authors reported in 2015 that the increase in stroke incidence in Africa is linked to the rising cardiovascular risk profile of the population as well as rapid urbanisation and consequent lifestyle changes. While an additional 75,000 new stroke cases were found in 2008, the estimate annual occurrence of stroke was found to be at least 30,000 cases in rural South Africa in 2011 (Maredza et al. 2015). These incidences are increasing in younger adult age groups. With this burden of disease, there is probably a high rate of disability.

A significant factor here remains the unresolved land question which maintains inequality through subjugation of many indigenous people to poor and disabling living conditions and the migrant cheap labour system. These inequities and inequality continue to contribute to both prevalence and incidences of disability. I will use three examples of the burden of disease to demonstrate this argument.

Firstly, colonial subjugation and apartheid dispossession opened windows for a migrant labour system leading to the destruction of family life, broken homes, vast income inequalities and extreme forms of violence which all formed colliding epidemics of illness and disease in South Africa.

People who were separated violently from their lands and resources were forced to work do hard labour for low wages. They worked and lived in poorly ventilated and overcrowded conditions thus exposed to higher rates of communicable diseases like tuberculosis (TB), the second leading cause of premature mortality in South Africa.

Since the 1920s, the majority of adults in what was referred to as the Transkei and Ciskei had been infected with TB (Coovadia et al. 2009). Apartheid further consolidated this and those who were left behind inhabiting what was known as the Bantustans were limited to young people, the elderly, sick or disabled and mostly women who were unemployed.

All these events led to the four colliding epidemics (quadruple burden) which were only recognised from 1994. Poverty deepened as migrant labour intensified and children-led families increased thus further undermining family life. These social dynamics and working conditions are similarly linked to land dispossession and migrant labour which are both factors of production in racial capitalism. Today, the struggle to produce food in rural areas and the pressure to fit into the dominant modernised society continues to coerce migration among both men and women to urban areas for this hard labour. Later, children also follow. Overcrowding in unsanitary informal settlements creates key health challenges from maternal mortality, malnutrition, TB, HIV/Aids, stress and poor diets and living conditions, leading to several diseases and teenage pregnancies.

Secondly, when deprived of opportunities for cultural expression and endorsement, enslaved people experience hostility which gives rise to explosive behaviour which can lead to violence and injury under the influence of alcohol. A feature noted in many disposed contexts is that loss of land and livelihood resources has increased alcohol consumption amongst indigenous people.

Alcohol consumption no longer becomes primarily for pleasure but is used as an analgesic for both existential and physical pain. This has in turn contributed to increased levels of violence in households and communities (Ohenjo et al. 2006; Cloete & Ramugondo 2012). Deprived of their traditional livelihoods and resources, forced into modernisation and working for income in order to sustain livelihoods, women have gradually lost their traditionally equal status with men. Excessive alcohol consumption plays a major part in gender violence, a trend noted to be increasing amongst young people.

This problem is noticeable in dispossessed people everywhere. Ultimately, this becomes a problem of poverty which stems from the loss of land and livelihoods without a viable alternative.

Thirdly, South Africa has a rise of obesity with 31 percent of men and 64 percent of women falling into the overweight or obese categories as per the results of the 2012 South African National Health and Nutrition Examination Survey. Obesity is an important contributing factor to the rising non-communicable diseases (NCDs) as illness increases with increases in weight. With landless people being deprived of their traditional livelihoods, Scott and co-authors (2017) reveal that access to food is mainly being facilitated by supermarkets which account for an increasing proportion of purchased food.

The food bought by landless people is influenced by cost. Whole and fresh foods are more costly and thus inaccessible compared to processed foods on both an energy and weight basis. Ultimately, landlessness underpins the swing to reliance on processed and packaged foods that are more salty, fatty and sugary compared to home produced natural foods on undamaged lands.

Those owning land dominate all the nodes in the food value chain – agricultural inputs, farm production, food processing and manufacture, and retail, including in South Africa. The low socioeconomic status of landless people because of exclusion and displacement from their lands also means that their lives are continuously shaped and reshaped by structural and socio-political factors.

It can therefore be argued that land dispossession, as a feature of colonisation, has significantly threatened peoples’ livelihoods and food security thus contributing to the cited burden of disease and a disability adjusted life. Equally important, these factors influence health inequities and the intersecting disabling conditions of poverty as we witness them.

These historical roots of colliding epidemics of illness and sickness as implications form a significant part of our history of poverty-related illnesses and violence leading to both premature mortality and disability adjusted life years. It could be a case that the plethora of social problems plaguing indigenous communities today such as poverty, chemical dependency, depression, suicide, family violence, and disease are linked to the devastating consequences of conquest and colonisation of people’s lands. Therefore, enabling access to land and natural resources to all people in an equitable manner through the state has the potential to improve our health and disability outcomes. DM

Lieketseng Ned graduated as an Occupational Therapist (BSc OT, UWC) in 2009 and completed her MPhil in Disability Studies at the University of Cape Town in 2013 focusing on livelihoods of disabled youth in rural areas. Her passions include community based rehabilitation, Indigenous Knowledge Systems and disability related work. She is a lecturer at the Centre for Rehabilitation Studies at Stellenbosch University and is busy with her PhD focusing on the inclusion of indigenous knowledge within the current education system as a contribution to the health and well-being of indigenous people.