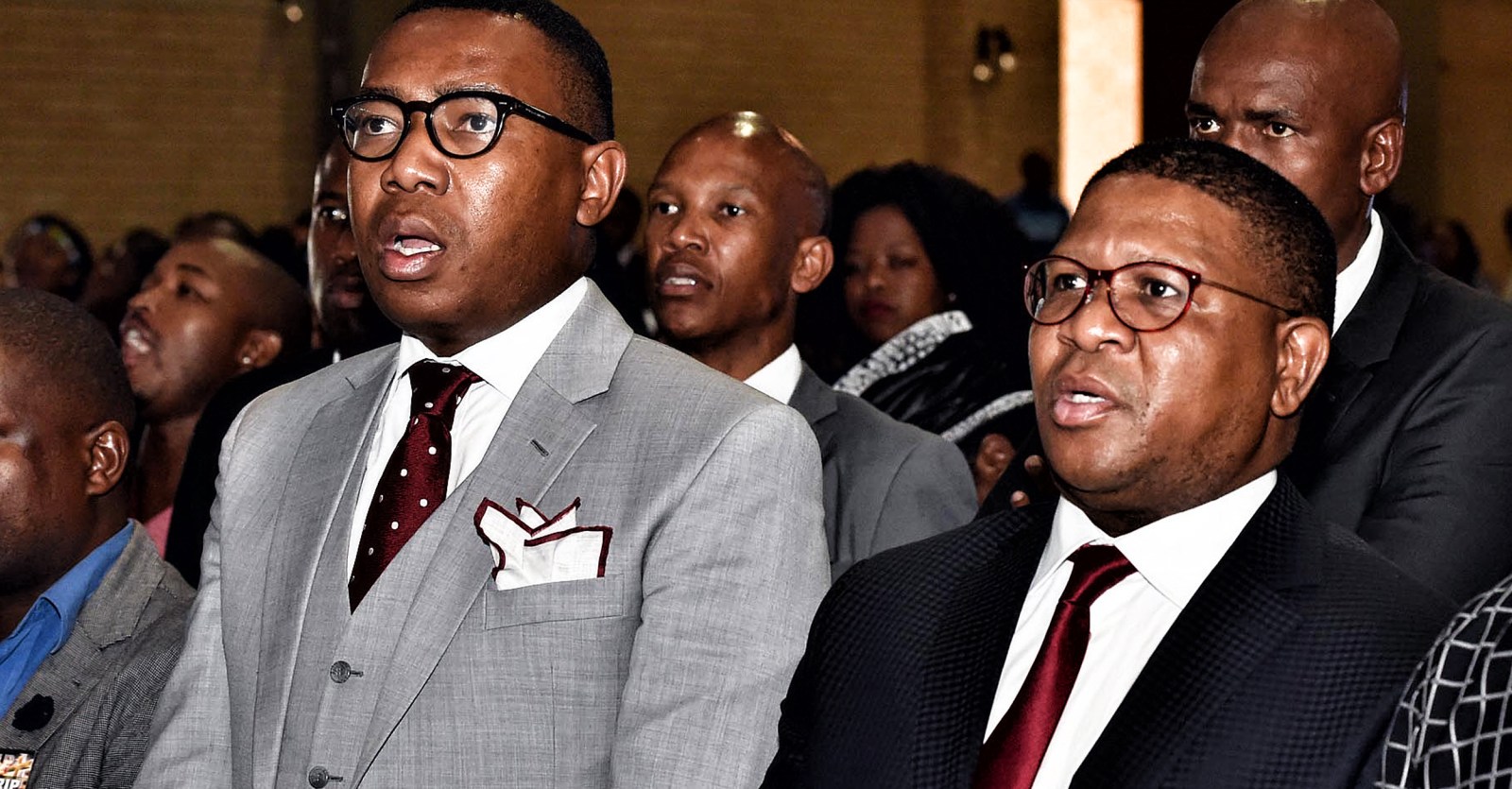 Evidence of ANC NEC member Mduduzi Manana’s decision to “withdraw” his National Assembly membership was like finding a needle in a haystack. It eventually surfaced on Wednesday, some 30 minutes before the start of his parliamentary ethics hearing that was abandoned because, clearly, there’s no case to make against someone no longer a MP. The convicted woman beater is playing the system, and is throwing money about.

At no stage did Mduduzi Manana, a senior member of the ANC leadership collective in its National Executive Committee (NEC), actually use the word resign or resignation. It’s consistently been “stepping down” and “withdrawing” – with an added twist of R1.5-million on two good causes and further financial support to send five men on post-graduate courses in gender studies.

On Tuesday afternoon Manana’s foundation carrying his name released a public statement saying, on his behalf, “I have decided to voluntarily withdraw my membership from the National Assembly” – to focus on business interests, academic commitments and working for the ANC ahead of the 2019 elections.

It took another day for the corresponding notification to officially reach his bosses in Parliament, the ANC chief whip and the office of National Assembly Speaker Baleka Mbete, according to three parliamentary insiders. As one put it in relation to the Speaker’s office, “There was no letter (on Tuesday)”; while the ANC in Parliament, after several calls to Manana, finally traced the notice to a front desk receptionist, quite removed from the team supporting the ANC chief whip, or the chief whip himself.

The timeline in this is important. Manana has known of his date with the parliamentary ethics hearing for the past 10 days, the notice period in line with the rules. On Monday the National Prosecuting Authority (NPA) decided not to proceed with the renewed assault case brought by Manana’s one-time domestic worker.

On Tuesday Manana, through his foundation, proclaimed he felt “totally exonerated” by this decision as these assault claims were part of “a politically motivated smear campaign against me by my political opponents” – and announced his stepping down from Parliament. It took another day for Manana’s letter to that effect to officially emerge in the institution.

On Wednesday morning six MPs, five of whom had flown in from various parts of South Africa, and parliamentary officials gathered for the ethics hearing related to Manana’s 2017 assault of two women. He had pleaded guilty and was fined R100,000 or a year’s jail in November 2017. Manana paid the fine, and remained in his parliamentary seat – only a jail term longer than 12 months without the option of a fine is a disqualification to be an MP – and thus was eligible to the complaint against him.

The committee at 09:30 received a copy of Manana’s official letter addressed to “Dear Honourable Speaker” under the Mduduzi Manana Foundation letterhead and dated Tuesday:

“This letter serve to inform you of my decision to withdraw my membership from the National Assembly with immediate effect.”

The official report to the MPs, which Daily Maverick has seen, clearly states that the “resignation letter” was received only on Wednesday morning in the Office of the Speaker, before formally recommending to close the case against Manana as he is no longer an MP.

Later ethics committee co-chairperson Omie Singh told journalists there had been no way to cancel the meeting because even though he had received media requests for comment, and had been sent a Facebook post of Tuesday’s Mduduzi Manana Foundation statement, there had been no official notification of a resignation.

“It would have been unethical (to act) without a formal letter from the Speaker,” said Singh, who earlier indicated he had asked his staff to follow up on the media reports “so we can get verification”, but they had been unable to confirm this.

It’s unclear whether Manana consulted the national ANC structures about his resignation from Parliament, something that could reasonably be expected given the ANC has deployed him there as far back as 2009. Manana did not consult his parliamentary caucus.

It’s also unclear whether the governing party is considering redeploying Manana into some other position, or whether the ANC is quite comfortable with him in the NEC despite his conviction for assaulting women. ANC national spokesperson Pule Mabe did not respond to various efforts to reach him for comment by telephone and by SMS and WhatsApp.

It is understood that the ANC Women’s League’s young women’s desk intends to name and shame Manana as part of its 1 August activities – separate from the national #totalshutdown marches against gender violence “as per the wishes of the organisers… due to the disallowance of our participation in paraphernalia”, as the league put it in a recent statement.

Perhaps, instead of naming and shaming Manana, whose assault of two women at a Johannesburg nightclub in Women’s Month 2017 is not only known but also wrapped up on the legal front, the ANC Women’s League and/or its young women’s desk should campaign for internal party disciplinary charges against Manana.

But Manana’s position in the ANC would have been strengthened when at the ANC December 2017 national conference he was elected to the ANC NEC, its highest decision-making structure between national conferences. His election to the NEC is part of a pattern within the ANC that has also seen convicted fraudster Tony Yengeni appointed to chair its crime and corruption working group, and the recent election to Gauteng party executive structures of Qedani Mahlangu, on whose watch as health MEC more than 140 vulnerable patients lost their lives in the Life Esidimeni saga, and Gauteng legislature ANC chief whip Brian Hlongwa who is facing allegations of graft totalling R1.2-billion.

There is a measure of irony that Manana, a convicted woman beater, had been allowed to stay put by his political party posses as elected public representative while facing new potential assault charges – and then to chose his exit from the national legislature as he did once it was clear there would be no prosecution.

And so it is opposition parties who are calling out the ANC NEC and national structures to act.

DA Chief Whip John Steenhuisen said Manana was “dressing up treachery as principle”. If principle was involved, then he should have departed from the ANC parliamentary benches when criminally charged in 2017.

“He has not moderated his behaviour. In the trial it emerged it’s not the first time it’s happened (assaulting women), and subsequently it happened again,” said Steenhuisen, who also indicated he’d be submitting parliamentary questions as to why the NPA decided not to prosecute despite the existence of an audio clip in which Manana offers R100,000 to his domestic worker to drop the charges.

IFP MP Liezl van der Merwe said that as Manana seems to be playing fast and free with his pension monies for a reputational fix, he should repay the salary he drew as ANC MP since being criminally charged in 2017 for assaulting women and his resignation – the salary of the past 255 days.

The ANC should not even consider simply redeploying him elsewhere, but ought to ensure that Manana also resigns from the ANC NEC, she believed.

“This ANC government is making a mockery of the fight against gender violence,” said Van der Merwe.

“They (ANC) are making a mockery of it with a woman abuser on the NEC.” DM