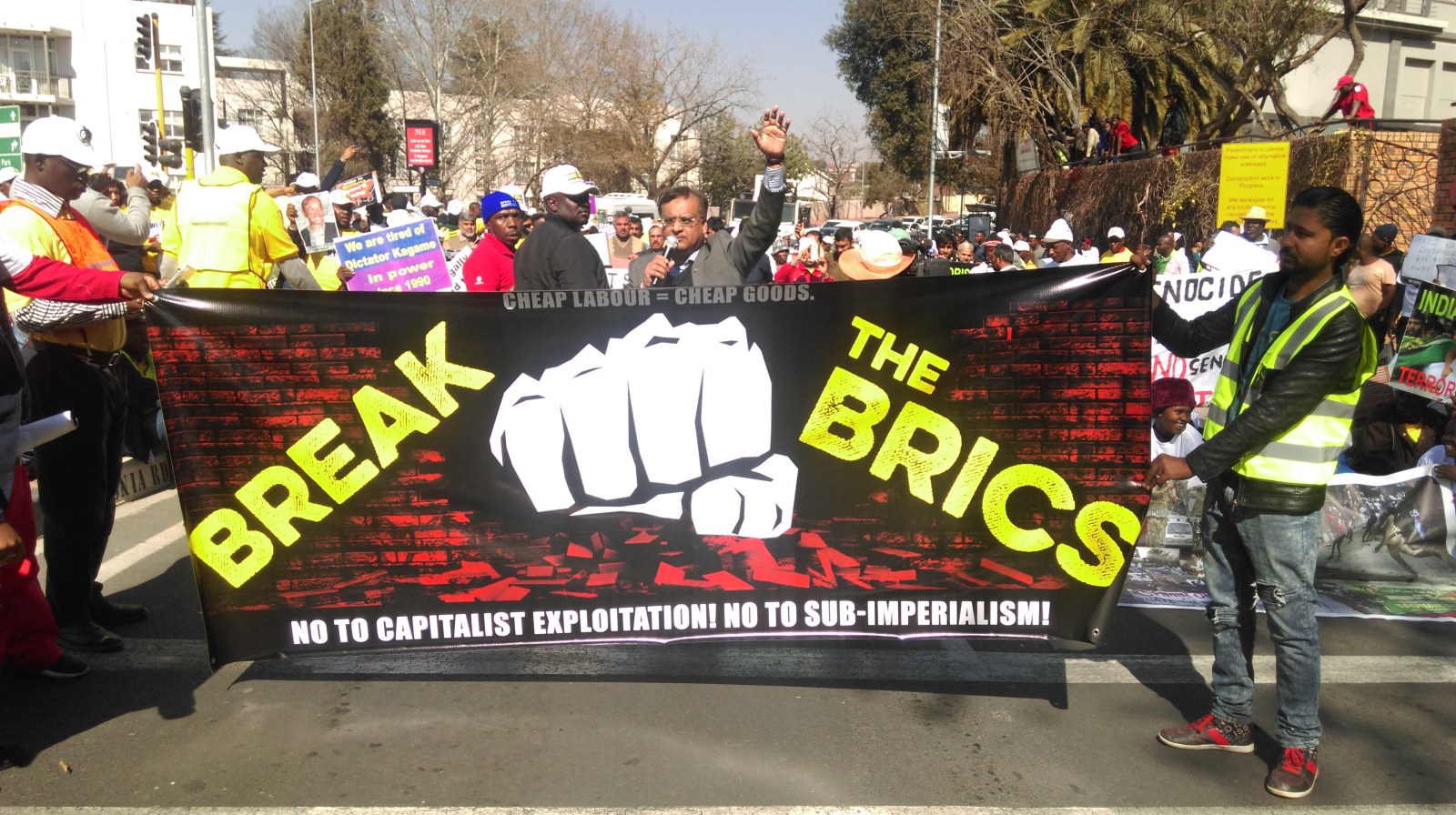 Photo: Members of the Break the BRICS coalition take part in a march in Sandton, where a BRICS summit was underway on 26 July, 2018. Photo: Nkateko Mabasa

As Brazil, Russia, India, China and South Africa held a summit to strengthen relations and increase trade between the five countries, a coalition of civic organisations marched to the Sandton Convention Centre to protest against what they fear is a bad investment for the working class.

Just over a hundred members of the Break the BRICS coalition, a civic movement consisting of labour, community and youth organisations, marched on the Sandton Convention Centre on Wednesday to protest against the BRICS Summit under way there.

The aim of the march, according to a statement by the coalition, was to raise awareness of the “capitalist nature of the BRICS states” and to oppose the “anti-working class” and “environmentally destructive” policies of the participating countries.

Trevor Ngwane, convener of Break the BRICS, said the summit is about big business making deals and has nothing to do with issues affecting the poor. The “neo-liberal pro-business summit”, said Ngwane, is about attacking the rights of the workers and reducing democracy in Africa.

“We want to raise awareness on how the BRICS heads of state undermine democracy and push policies that exploit the working class,” said Ngwane.

Zoe Akana, a Congolese national who works as a tour guide at OR Tambo International Airport, immigrated to South Africa in 2006 after what he describes as persecution by police and stringent limits to freedom of expression when criticising the long-time president, Joseph Kabila.

Akana said he supports the march because China poses a new kind of colonialism on the continent. His friends in the Congo frequently call to inform him of the bad working conditions and poor pay in the factories and mines that China operates.

“We, as Africans, must stand together and say no, because what is going to happen in South Africa is what is already happening in Congo,” said Akana.

Salman Khan, founder of the South African Kashmiri Action Group, said that although BRICS is welcome, it must not operate at the expense of the working class.

“South Africa is the economic sandbag which all the other countries dump their cheap exports,” Khan said.

He hopes to raise awareness of the “war crimes of Prime Minister Narendra Modi” in India’s occupation of Kashmir, where there have been reports of killings and rape, likened to the Israel occupation in Palestine, said Khan.

The Rwandan National Congress also participated in the march to protest against Rwanda’s President Paul Kagame who was attending the summit as a guest of BRICS. The congress’s Frank Ntwali said President Kagame abuses his power by the arrest and killing of opposition members.

In 2013, former head of intelligence Patrick Karegeya was assassinated in a Sandton hotel in an act which Ntwali believes was sanctioned by Kagame.

“We want to send a message that a world dictator should not be given a red carpet,” said Ntwali.

The coalition submitted a memorandum of demands which includes:

Minister of Public Works, Thulas Nxesi, and Minister of Water and Sanitation Gugile Nkwinti accepted the memorandum from the coalition.

Nxesi thanked the coalition for using their constitutional right to march peacefully.

“We will however take all these issues, table them to the leadership – the head of states, who are leading us, and then they will be able to look into how to deal with the issues that you have raised.” DM