Croatia’s World Cup: A story of sacrifice, contradiction and a bittersweet end for Modric 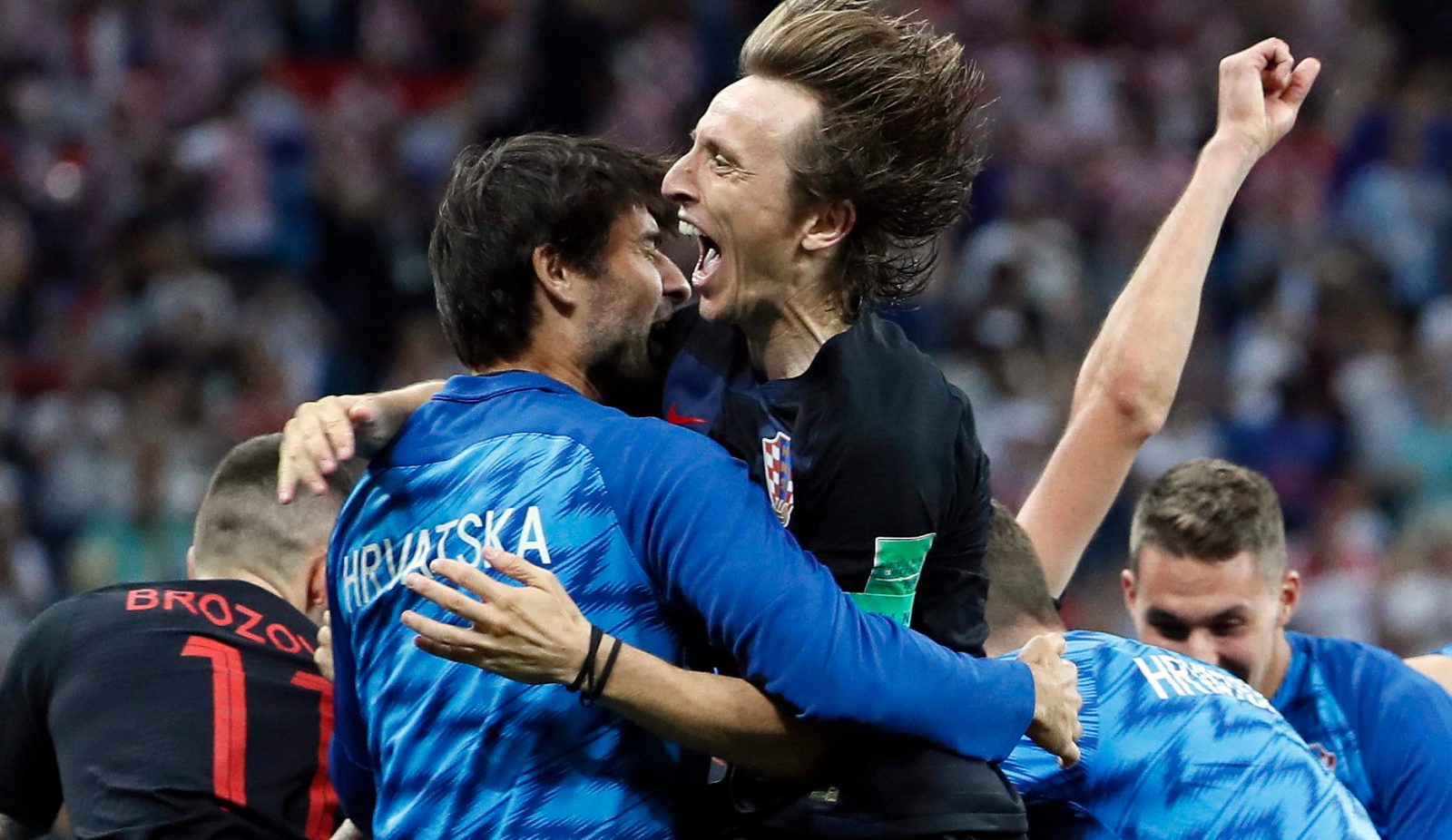 Luka Modric (R) of Croatia celebrates after the FIFA World Cup 2018 round of 16 soccer match between Croatia and Denmark in Nizhny Novgorod, Russia, 01 July 2018. Croatia won the match 3-2 after a penalty shootout. EPA-EFE/ETIENNE LAURENT

Comeback Kings Croatia finally met their match in the World Cup final on Sunday. Luka Modrić earned himself the golden ball award but, like the national team, the midfield maestro's brilliance on the pitch is a medley of contradiction and admiration.

Luka Modrić walked away from the World Cup having won something: the Golden Ball. After working his socks off, falling short in the 4-2 defeat against France in the final, it must have felt somewhat irrelevant.

Modrić and his team’s journey to this point was stupendous, coated in contradiction and some downright weirdness, beginning with a story of a country that routinely punches above its weight on the global sporting state.

The notion that the sporting success of a country should be dictated by its population size is somewhat convoluted. But it’s been noted throughout Croatia’s World Cup odyssey, time-and-time again coming back from being down and out.

It’s hardly a surprise, though. Despite a lack of resources and a population of just over four million, Croatia have routinely punched above their weight.

The squad is packed with recognised names including Luka Modric, Ivan Rakitić and Danijel Subašić but it’s not just on the soccer pitch where the nation has excelled over the last few years.

For many Croats, sport is a means of escape. Former international soccer player and coach Niko Kovac, now in charge at German giants Bayern Munich, wrote in German newspaper FAZ:

“Sport is in our blood. Croatia loves competition and comparing itself against others and it wants to be the best.”

And with passion comes opportunity, working abroad when the economy was struggling or getting away from painful memories.

“That gives an example for young sportsmen and women and we already have many idols who they can emulate,” he said.

When he was just six-years-old, the future Real Madrid star’s grandfather was executed by a Serb militant group. Modric, living with his grandfather at the time while his parents worked long hours in a factory to forge an income, had to leave the village.

The family found refuge in Hotel Iz in the town of Zadar and it was in the car park and corridors, often without electricity or running water, where Modric refined his skills and built his character.

Subašić, too, grew up in Zadar and played alongside his midfield partner since the two were kids. The keeper appointed himself to take up duty between the posts when he was just seven and he hasn’t moved since, not even when he is injured.

Modric doesn’t speak much about growing up, but he doesn’t want to forget his roots either.

“When the war started we became refugees, and it was a really tough time,” Modric told The Sun in 2008.

“I was six years old. These were really hard times. I remember them vividly, but it’s not something you want to remember or think about.”

“We lived in a hotel for many years as we struggled financially, but I always loved football. I remember my first shin pads had the Brazilian Ronaldo on them, and I loved them.”

How can you forget?

“We were always afraid, that’s what I remember the most,” Tomislav Basic, one of Modric’s coaches at local club NK Zadar, told a Canal Plus documentary.

“Thousands of grenades, fired from the surrounding hills, fell on the training pitch in those years, and we were always racing to reach the shelter. Football was our escape from reality.”

Modric’s incredible mental strength has been visible throughout the World Cup. When he missed a penalty in regulation time against Denmark in the last 16, he calmly slotted the next one when the match went to a shootout.

“A boy training under shells and growing up during war knows no fear,” Marijan Buljat, Modric’s friend and childhood team-mate at NK Zadar told AFP.

“It is ugly to go through this, but eventually he showed how strong he is in all situations. This all contributes to him being fearless and becoming one of the best in the world.”

But war and death wasn’t the only thing Modric had to overcome. His frail physique meant many coaches questioned whether he could cut it as a pro, but he’s answered all those doubts with four Champions League titles at Real Madrid and plenty of personal plaudits.

Despite his difficult childhood, Modric later told FifaTV that he remembers feeling like a “normal” kid with a positive family atmosphere. That has come to characterise his style of play: deceptively strong, unflashy and a workhorse that keeps going to make those around him better.

But while he is the heart of the Croatian midfield, he divides opinion in his country.

In March, he was charged with giving false testimony in a court case that resulted in Croatian football kingpin Zdravko Mamic being sentenced to six-and-a-half years in prison.

The indictment still needs to be formally approved by a Croatian court, but Modric infuriated fans last year when he was due to testify against Mamic. Reports claim he had told anti-corruption investigators that Mamic had altered paperwork to swindle tax money. But when Modric took the stand, he said he could not remember anything.

Perjury carries a maximum prison sentence of five years, but this adversity pales in comparison to what the 33-year old has already overcome.

Whatever happens from here, Modric has earned every plaudit, even if his career ends with a blot in the footnotes.

But Modric is just one example in sheer madness that has engrossed this team.

From fans actively trying to get their side banned from international competition as a means of protest, to Nikola Kalinić refusing to play against Nigeria, claiming he was injured, emphatically beating Argentina, Croatia FA executive Damir Vrbanović attending the World Cup, despite being sentenced to prison, Domagoj Vida nearly causing a mild diplomatic incident with his “glory to Ukraine” video and Fifa being accused of ‘covering up’ an investigation into fascists chants by the team’s fans, Croatia and Modric will forever be remembered as a likable contradiction. DM