The Head and the Load, William Kentridge’s epic production on imperial indifference in WWI, premieres in London 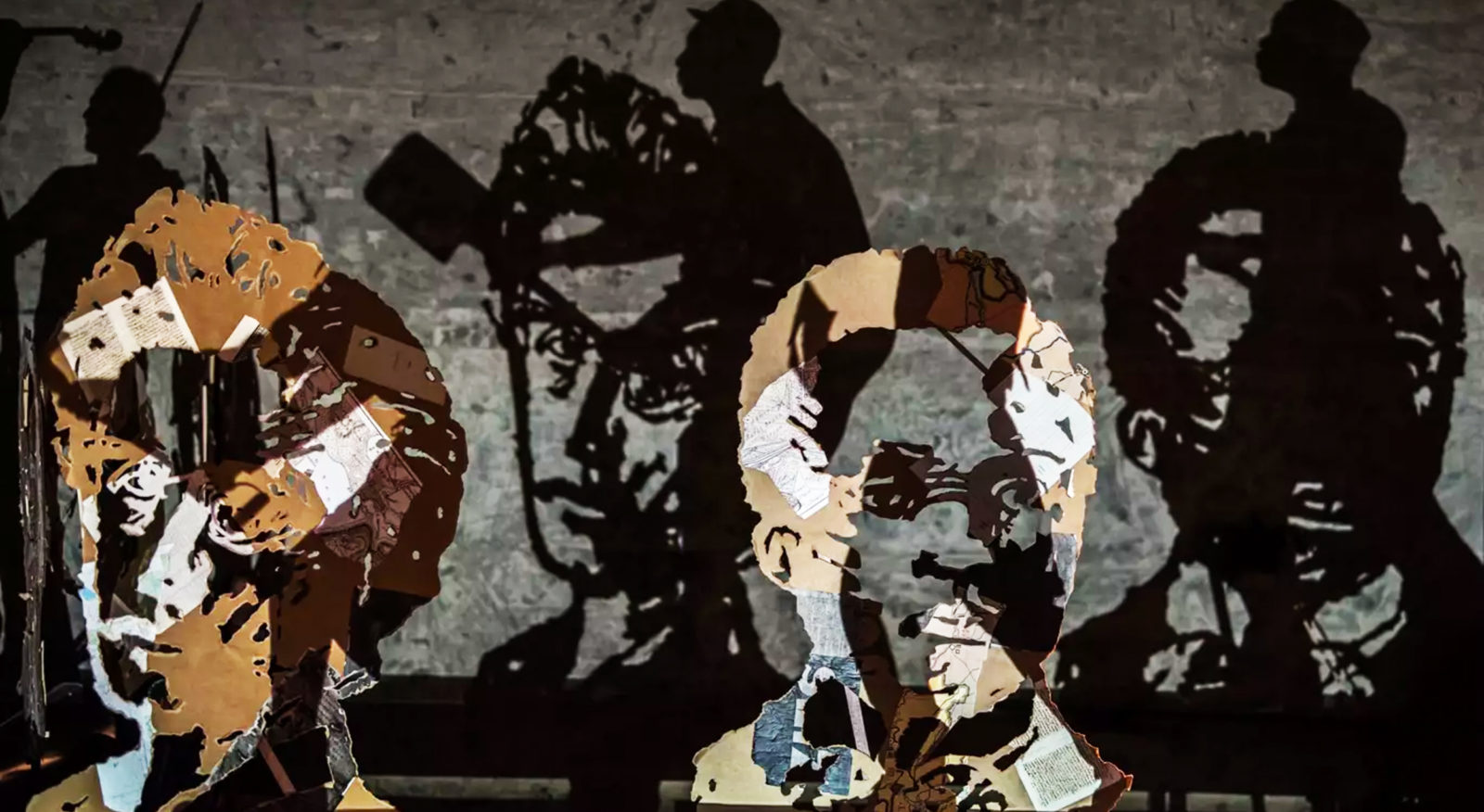 An astounding work by SA’s premier artist William Kentridge pays homage to the hundreds of thousands of African soldiers who fought and died in World War I. The survivors – about two million served – returned to their countries with their service and humanity unacknowledged by their colonial overlords.

‘Lest their actions merit recognition, their deeds must not be recorded.’

– An unnamed military figure involved in World War I.

It has taken the creative genius of South Africa’s William Kentridge to bring into focus the terrible injustice and indifference meted out to some two million African soldiers embroiled in a war that had nothing to do with them.

The audience of some 500 attending the world premiere of The Head and the Load in the Tate Modern’s cavernous Turbine Hall on 11 July were mesmerised by a kaleidoscopic cacophony of sound, music, silhouette and projected images, sculptures and excerpts from literature.

The performance was thrilling, bewildering, harrowing and, at times, absurd and even disorientating – rather like World War I itself.

“In this new performance, we experience the story of the thousands of Africans whose lives were seen as so expendable that their service and deaths were not even recorded.”

The Africans saw service in WWI at the instruction of their colonial masters in Britain, France, Belgium and Germany. Close to a million perished either in combat or as a result of famine among those left behind without their menfolk to provide.

Only about one quarter bore arms and the rest were porters. An estimated 100,000 British African conscripts died in battle and those assisting the German war effort had a similar level of casualties.

The Union government at the time in South Africa would not allow the black South African contingent to bear arms because it might set an unfortunate precedent and encourage the notion of equality between black and white. This was a reminder of how the colonial era had set the stage for apartheid South Africa.

I first became aware of the scale of the colonial atrocity when, 15 years ago, I visited the WWI war graves in Dieppe in northern France where a cemetery of black South African auxiliaries is meticulously maintained by the Commonwealth War Graves Commission.

I was struck by familiar black South African surnames on the tombstones and the immaculate condition of the surrounds in a segregated cemetery a few kilometres distance from where the white soldiers, who they served, were buried.

I was then a guest of the French government along with colleagues Fred Khumalo, author and journalist, and the late Chris More, a former editor of Sowetan.

This made the experience all the more poignant – and my shame the greater – for having known very little about the scale of death and suffering of the black South African auxiliaries.

Khumalo went on to write a brilliant novel entitled Dancing the Drill of Death about the sinking of the SS Mendi off the coast of the Isle of Wight in 1917 and the death of 616 black members of the South Africa Native Labour Contingent en route to assist British forces on the Western Front.

It is the failure to acknowledge the existence and vital role of these Africans – purely because the victims were black – that Kentridge has sought to rectify on a broader canvas of the entire African “war effort”. It is by far his most ambitious work and will be hailed as a tour de force.

A special auditorium with probably the longest stage ever constructed at 50 metres – and the widest and highest projection screen of the same proportions – was frenetically constructed over a few weeks while the cast rehearsed in Massachusetts in the United States.

The gigantic elongated stage and steeple-high ceilings created the atmosphere of an industrial cathedral with the audience swaying from one side to the other to observe different and constantly changing activities and almost ceaseless procession of porters and related goods on screen.

The breathtaking dimensions of the stage and the venue were matched only by the epic scale of the production and the gigantic vision and creative ambition behind it.

Kentridge’s unique brand of creative genius was enhanced by the superb musical direction of long-time collaborator Philip Miller and Thuthuka Sibisi, a brilliant South African cast and a support team made up of cutting-edge practitioners from more than a dozen countries.

It was an epic and profound performance which belatedly acknowledged and celebrated the humanity of the African soldiers and porters who believed that they would win acceptance and reward from their colonial masters for their loyalty and sacrifice.

Instead they were almost air-brushed out of history at a time when Britain’s reigning monarch’s grandfather, King George V, was on the throne.

World War I, sparked by the assassination of Austrian Archduke Franz Ferdinand at the hands of Serbian nationalist Gavrilo Princip, became known as the Great War of 1914-18.

Its centenary has been commemorated in Britain by an extraordinary array of events and installations over the past four years under the banner of 1914-18NOW which commissioned Kentridge’s work.

His ground-breaking production will go on to be staged in Germany, the US and the Netherlands for starters. It is an epic work which is likely to have a profound impact not only on all who see it – either onstage or live-streamed on YouTube – but on theatre world-wide.

“We rarely reflect on those from the British colonies who fought and died nor on the impact of the First World War on countries that were then part of the empires,” said Jenny Waldman, director of 14-18 NOW.

“This work by William Kentridge goes some way towards righting this wrong.

“It aims to ‘recognise and record’ the deeds and actions of the Africans whose invisible heroism during that war has long gone unacknowledged.”

This can be taken literally as the physical suffering of having to carry heavy loads for their colonial masters on the Western Front.

Or it can be taken more figuratively as having to carry the heavy psychological load of colonialism and the damage it wrought on the human psyche.

Using his unique brand of interactive collage, Kentridge has in one flourish restored the humanity of the descendants of Africans lost in the war and accommodated the need of the colonial descendants to restore their own dignity by acknowledging the humanity of others. A classic case of ubuntu in the year of the centenary of the birth of Nelson Mandela whose life embraced the qualities of inclusivity, reconciliation and magnanimity.

In a display of sheer exuberance following the final rehearsal, Kentridge led the cast and support staff in an impromptu sprint down the full length of the stage and back: a 100-metre dash which left some trailing behind but ignited a surge of energy among the astonished audience.

“The test is really to find an approach that is not an analytical dissection of a historic moment, but which doesn’t avoid the questions of history,” said Kentridge in the programme pre-amble.

“Can one think about history as collage, rather than narrative?” he asked.

The collage he has curated is the most powerful statement yet about the legacy of WWI. DM

The Head and the Load is set for seven performances at the Tate Modern, which was Kentridge’s venue of choice, before transferring to Germany. John Battersby is an author and journalist based in London.