Encounters in the Kalahari unlock secrets of our healing and reconciliation

Encounters in the Kalahari unlock secrets of our healing and reconciliation

He is barely five feet tall. You will not see him in a crowd. One can read his 89 years of age in the wrinkles of his face. He can’t read or write. He can’t even sign his name. But he can sing the future. iGubi is one of our last San Shamans on this planet. If he has no formal Western education, he holds the greatest knowledge, like a Book of Eli, to save humanity. Do we have the wisdom to realise he holds the key to our future?

“We are the !Xõ. The First People to see the Sun. Our traditions travel the length and breadth of time to the beginning of the beginning,” says iGubi. “We lived before borders. There were no fences. Now we have to fit into Nations. But we were here long before countries. Now we are divided. Our way of life is dying out and our traditions are disappearing under the poison of Western consumption,” says iGubi.

Returning from the Kalahari in Namibia where I spent time with this San Elder, iGubi, I was struck by the realisation that we have so much to learn from indigenous knowledge systems. “We see our traditional lands invaded by white farmers and other tribes. They put up fences and grazing their cattle, they destroy the natural vegetation. They do not respect our customs and the Spirit of Mother Nature nor our traditional system of Nhora — understanding that our girls represent the sacred feminine and need to be respected. Marrying into our tradition is respecting that we are marrying into our way of life and taking care of our family, community and environment. Our girls are impregnated and left to fend for themselves”, iGubi laments.

As a traditional leader, iGubi holds ancient knowledge that takes us to the beginning of the beginning of time. Modern science is now conclusive that our – the human species we are as Homo sapiens – birthplace is in southern Africa. Our veritable Garden of Eden spreads across southern Angola, northern Namibia and western Botswana. And the San are our oldest living ancestors. 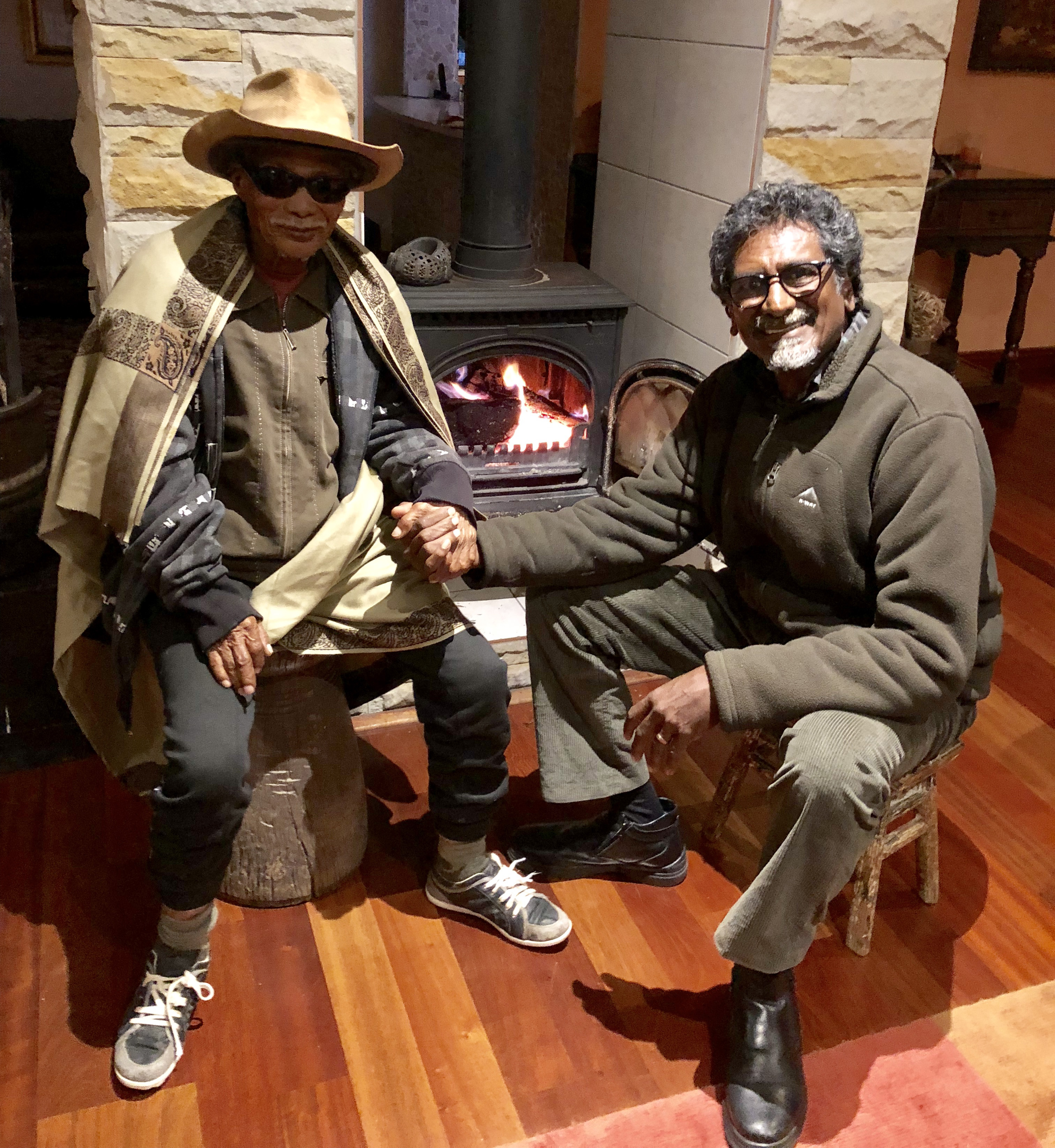 iGubi regards the modern emphasis on competition and dominion over Mother Earth as the reason why we are facing an ecological catastrophe. Instead of intelligent collaboration, reciprocity and sharing, we prioritise our needs amongst the millions of other species as the only goal of living.

Reciprocity enables the obligations we have as human beings — towards each other and to this planet we call home. The Guardian in May this year reported that that the “world’s 7.6-billion people represent just 0.01% of living things, according to a study done. Yet since the dawn of civilisation, humanity has caused the loss of 83% of all wild mammals and half the plants, while livestock kept by humans abound.”

Today, many people yearn to rediscover the virtues of a simpler age of self-sufficiency. In truth, there never was such an age for our species. From time immemorial, human beings have been obsessed with exchange, pacts, contracts, bargains, fairness and reciprocity—concepts virtually unknown to most other species.

How we live today raises profound questions regarding the ways we have traditionally designed and put to use our institutions. The ideal hypothesis is of a self-organising society able to learn its way into preferred futures, in ethical reciprocity with its environment and in ways that are “appreciative” of all its members’ needs, expectations and desires.

We do not hold each other together and understand our shared humanity. We do not respect Mother Earth that nourishes our life. We do not understand that we are part of Nature, not apart from it. We do not see the thread of spiritual energy that connects us to the forests, the rivers, the oceans, the wild animals and our plants which all carry the spirit of the Creator. Therefore we live in disharmony and conflict.

I see that wherever I go in the world. Our addiction to consumption means we live on top of each other. High walls, separating the wealthy from the impoverished, prevent us from seeing the spiritual connections between ourselves and the splendour of the natural world. Our roads are crammed with cars spewing poisoned gases, our cities overpopulated, our oceans and sea life covered in spilled out and dumping grounds for our toxic waste, and an ever-increasing list of extinct species and endangered animals.

My hope is that we understand that we are at the crossroads. South Africa is at the crossroads. We are carrying a deep “woundedness”. Our inauguration of democracy, in 1994, was an overarching social compact that created a safe container to have frank conversations about sharing our resources so that no-one is left behind. We have not done that. The fact that millions will go to bed hungry in a country as rich as ours is an indictment on us all.

Indigenous cultures are adaptive. And we can learn from them. There is no place for one dominant culture that we all have to be conditioned to, or be marginalised by. We should strive to move out of our echo chamber — where we don’t socialise across our diversity and differences, but stay in the safety of our silos and social groups.

Ultimately, the higher moral purpose is virtuous alignment; the survival of the whole of humankind and advancement to higher levels of consciousness. We will need to discover how to redesign key aspects of our culture in ways that restore the primacy of emotion, co-operation and intuitive knowledge to our relationships with each other. And we shall need to determine how best to pursue the kinds of reciprocity that will test and authenticate the effectiveness and resilience of the new paradigm.

The embracing of appreciative ideals like these, and a conscience based upon reciprocity and altruism, is just one example of an attempt to pass on a more positive gift of thinking to future generations — the inestimable gift of hope, the reorientation of our society to a culture of respect for the environment—rather than one of unmindful desecration. An appreciative society, underpinned by reciprocity, offers a way forward, out of the clash of values between material growth and environmental erosion towards a recovery of our humanity.

SA is a living laboratory where North meets South and East meets West. We can create the new way of learning to live together. Of mutual healing. Of ensuring that we go back in time to understand even the suffering of the First People. We need to hold our dogmas and beliefs lightly and embrace mutual learning; so that the traumas of woundedness, we all carry in our lineages, can be healed. To do that we have to incorporate the rich tapestry of healers like iGubi who carry the original wisdom of how we should live on Mother Earth.

Re imagining, redesigning and reorganising the country we live in will be the greatest gift we can make to the world. And it will be on the 100th anniversary of Tata Madiba a fitting tribute to his legacy. As he often said: “It always seems impossible, until it’s done.” DM